Making this post as yesterday my family took our oldest cat, Larry, to the vet with the understanding that he may be put down as his body seems to be starting to fail him. He is a rescue that we adopted in 2004, and to be honest, he chose us. As soon as we met him, we knew he was the one. Unfortunately as he was a rescue, all we knew about his past was that he was found living in a Safeway parking lot and was thought to be around a year old. He is at least 16 years old but could be 18 years old.

Recently he has been having trouble with relieving himself in the litterbox and doesn't jump much due to arthritis. However he is smart and as such has just adapted how he does things. In the last month however he has not used the litterbox once and in the last week has had nothing but mucusy diarrhea.

There's more to the story than what I've posted, but it gives most of the info needed. Anyways, at the vet while the whole family is bawling the vet did agree that he has severe arthritis in all his joints and appearance wise was an elderly cat. As standard procedure, they gave the option to try a few treatments to help him in his old age and offered the option to run blood work on him.

The main point was how his quality of life is, which is still very good just he's in pain from arthritis and some things he's doing could be because of that. It even came up that if you catch him relieving himself outside of the litterbox, he looks at you with an ashamed look before looking away, he knows he shouldn't be doing it. We decided he deserved to try the treatments that could help him in his old age.

Anyways, despite his appearance and frail looking walk, he still put up quick a fight with the vets and surprised them by how strong he still is. Also surprised them with his bloodwork which came back as if he was a much younger cat, still acceptable and not at all what they expected considering his age.

Long story short, he has developed a heart murmur and has been put on blood thinners, arthritis medication, pain medication and a stool hardener. Fingers crossed because my family knows that we will never find another cat like Larry, he is truly a unique animal.

And the old man cat himself. 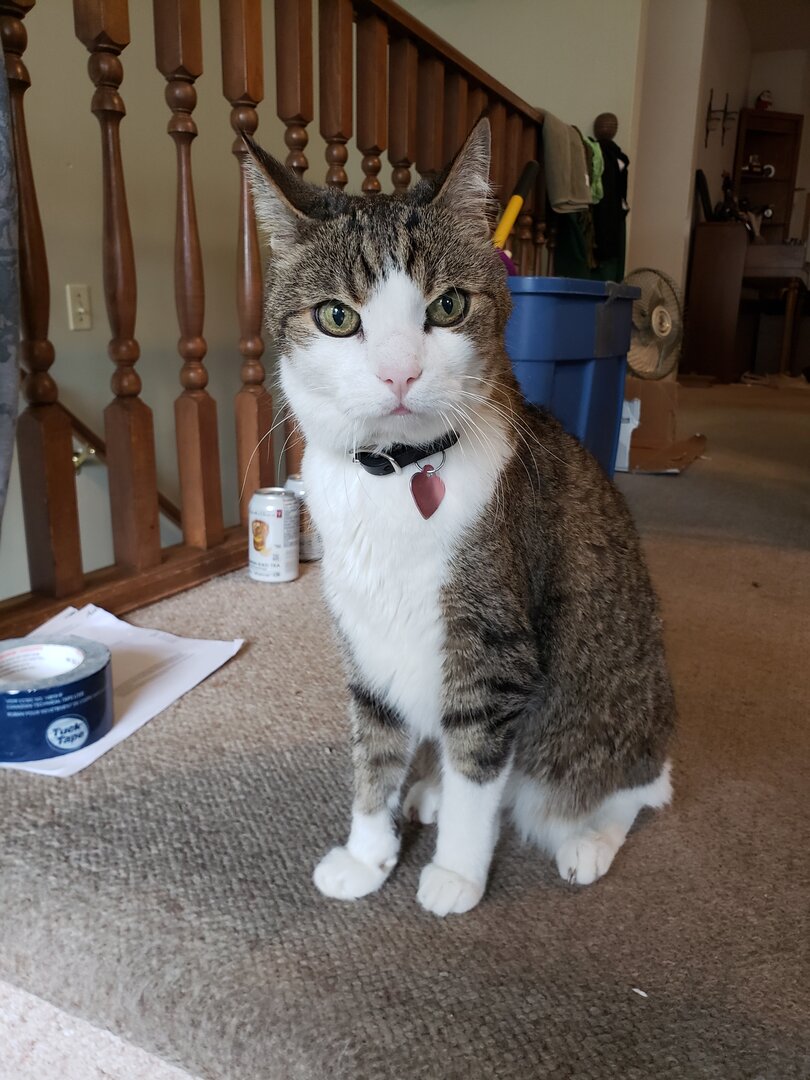 Staff member
His levels look great! I would recommend a very low sided litter box that is wider than what he is using now. It may help. Also, have you looked into any supplements to aid the pain from arthritis?

@Decadancin ,we are actually already doing that he's just one of those pets that you feel obligated to do everything to help him feel better. It would have felt wrong to put him down when we haven't quite tried everything yet. This cat is also the same cat we saw try to catch a rabbit while on his backyard leash, had he not been on the leash, he would have caught it. But he has also brought us mice and birds as gifts, and they've not always been dead yet lol

Hi blood test results surprised both the vet and their tech as he has had a history of developing struvite crystals throughout his life. They honestly had to check that it was his blood.

Staff member
I always believe that if there is a quality of life it is worth trying! Our boy is now 12+ years old after throwing a blood clot at 6 months old. We took a risk and he is so worth it.

Our other boy was 18 and had to have subq fluids for the last few years, but his quality of life made it easy to do!

Staff member
What type of food is he eating?

Larry is a boss name Best of luck to him and your family, our family dog is deaf and blind at this point and has 5 teeth left. Never easy to see you pets get old

Staff member
He is such a handsome feller!!

Aww...so glad you’re giving him the best care. Tabbies are always the most awesome of cats.

@Decadancin half high quality wet cat food half Hill's urinary care wet food. I know it's not the best, but it's the only way we've managed to keep him from developing struvite crystals.

Jevin said:
@Decadancin half high quality wet cat food half Hill's urinary care wet food. I know it's not the best, but it's the only way we've managed to keep him from developing struvite crystals.
Click to expand...

That’s why I was curious. Keep up the great work with him!!!

Update on Larry, he seems to be getting around easier, is already having less frequent accidents, but does not appears to be not using the litterbox still. Actually saw him jump off the back of the couch and land gracefully the other day, something he hasn't done in ages.
You must log in or register to reply here.

Tuesday at 6:15 AM
JulianAndGuthixChams
J