Over the last few months it has been getting harder and harder to find decent crickets! I realize there is a problem with a virus that affects crickets and has wiped out a lot of suppliers. What is driving me nuts is I cant seem to find a reliable supply of adult/large crickets. I seems no matter where I buy I only get one in ten of the size I order, the rest are all small, 2 or 3 week old at best. Only a couple local stores sell crickets in bulk/loose the rest sell these really annoying "bug tubs" that contain 25 or 50 crickets along with food and water gel. The few stores that sell loose/bulk crickets are faced with the same problem as myself, only about one in ten are actually the size that they have ordered! I am trying to feed several LARGE chams and tiny crickets don't really cut it! I do try to use other feeders as well, such as super-worms and hornworms, but the hornworm supply is very unreliable and expensive and supers aren't the best staple. Another thing that bothers me is I read all about how great dubia are and I cant get them in Canada! Boo Hoo for me. Thanks for letting me rant.

Hate to be mean but I have a thousand or so just 30 miles south of Canada. Rotten border!!!

I think cham nation/Drew has a dubia colony. Im sure he'd prob sell you some to start your own. I'd check with him or some of the other canadian beeders. Im sure someone can get you started. Btw, it took me about 6 months to really get my colony producing enough to have a constant supply of nymphs. So dont expect to have an immediate staple food source.

I don't know how limited you are on space, but if you keep ordering and recieving undersized crickets, spend you about $20-30 on a couple of big plastic storage containers and a simple lightbulb socket/fixture. Rig the lightbulb through the lid of your container and add an appropriately sized bulb. They'll be the size you need within a week or two, depending on how warm you keep 'em. It may take you a few weeks, but once you get some up to size and you continue to order the 'undersized' ones on a regular basis, you should be good to go. I have the same problem as well- only a fraction of the crickets are the size I need.

There are many cockroach species which are good feeders, not only dubias.
In fact when we had the "cricket plague" in our country three years ago, my dudia breed suffered from the desease too (it was not as lethal for them as for crickets, but some of them died and the corpses were terrily stinking, so I got rid of entire breed).

Anyway for melleri it is more practical to use larger cockroaches.
I am satisfied with B.discoidalis (they can stand quite low temperatures and they are excelent breeders), B.craniifer-brown morph (they may have problems when sheding during "not suitable" temperatures), B.giganteus (avoid temperatures bellow 20C), B.colloseus (seems to stand low temperatures a bit better then giganteus, but they are not so good breeders), Hemiblaberus bruneus,...

Also Shelfordella tartara (=Blatta lateralis) is worth of noticing, they are almost as good breeders as crickets, though they may be too small for melleri.

I hear ya on the crickets, my melleri an adult chams been hatein it havin eat twice as much cause there so small. i use other feeders like always but my chams love crickets, i just got a box of 1000 adults, was really surprised to open the box and dumped them in there bin and only to see only a few dead an i think thats cause they got squished...this is a diff type the usual an there huge, i dusted some an fed some off an the chams love em theres alot of meat on these....I put a couple layen bins in there tub see if i can get some little crickets out of them... 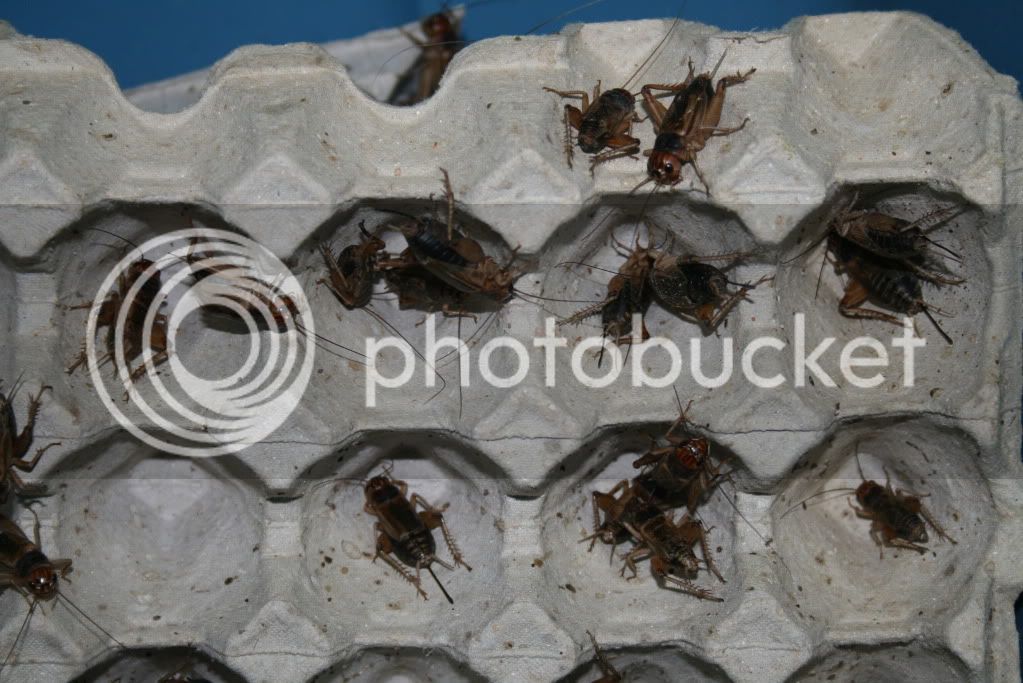 This is a "banana" cricket G.assimilis. I breed this species many years, they are my favourite. Unfortunately, they suffer from the same deseases as A.domestica. If you have the desease already at home, it will last approximately five days till they start dying.

robertc said:
This is a "banana" cricket G.assimilis. I breed this species many years, they are my favourite. Unfortunatelly, they suffer from the same deseases as A.domestica. If you have the desease already at home, it will last approximately five days till they start dying.
Click to expand...

Have you tried Canadian Feeders? The customer service there is great, although I don't know what he has for really big feeders (I just have wee chams).
You must log in or register to reply here.

silkworms for a baby cham