Vitamin deficiency? Beginning stages of MBD? How to turn it around!

Chameleon Info:
Your Chameleon - Male Ambanja Chameleon, 15 months old, 9 months in my care
Handling - Every day usually. He enjoys coming out.
Feeding - Part of the issue here. My previous chameleons always enjoyed Discoid roaches but he doesn't seem to care for them/is much pickier. He seems to like superworms and hornworms. Lately his appetite has been MUCH lower. He will sometimes eat a super worm a day. I would say the last two weeks, he's eaten maybe 3 worms/week. He didn't touch the last batch of hornworms I got him. Just bought him crickets for the first time just to try them out, hasn't eaten any yet. Gutload with whatever veggies we have around. Lately it's been red pepper, cucumber, sweet potato.
Supplements - All rep-cal. Calcium + d3, no d3, and a multivitamin. Full disclosure: I've been slacking on his supplements for the past few months, but he was on the calcium no d3 every feeding, no d3 every 2 weeks, multivitamin every 2 weeks alternating. I'm concerned that from my actions this he has a vitamin deficiency and I need help with getting him back in the mood to eat and out of this depression episode.
Watering - Spray his cage 2-3X a day, he HATES water, will shake dramatically, but eventually will start drinking. Also he will sometimes come in the shower and he enjoys drinking in there too.
Fecal Description - Never been tested for parasites, generally white urate, small poop.
History - CBB

Cage Info:
Cage Type - 18x18x36 all screen enclosure
Lighting - 5.0 UVB linear, 60w flood lamp for heat
Temperature - his heat is around 87-89, and the rest of his cage is around 69-72 I believe. Temperature gauge
Humidity - 65-75% when freshly sprayed. It gets pretty dry in there otherwise, so we try to spray at least 2-3 times a day.
Plants - Always have had a Schefflera in there, recently (maybe 2 weeks ago) added a small Pothos at the bottom of the cage to give him more things to climb through. He's the most needy chameleon I've had, and really likes crawling around in different places. He will scratch to come out of the cage just so he can climb on the window curtains, lamp, whatever he can get onto.
Placement - He's in the spare bedroom, relatively close to a fan but not directly beneath it. Has been in the same spot since I got him.
Location - Tampa FL

Current Problem - Lately (last month or so), Bernard has been acting "depressed" as we've been calling it. I got him a new UVB lamp, as I noticed his was 8 months old, and refreshed his plants in the cage in case he wanted more to roam. He's been pickier and pickier with his food. He used to eat around 5 every other day, but now we're lucky to get 3 a week out of him. He's been closing his eyes during the day, and lately have been noticing sort of a wobble. I thought it was a leaf dance, but it seems more like a balance issue, especially combined with the lack of appetite and eyes being shut during the day. Here's a video.

I understand I screwed up by not giving him supplements, especially with having them all on deck, but can anyone give me some input here on how to get him up and running? Do I force feed him? Is there a way to supplement his water for the time being? What do I do to help him get back on the up-and-up? His limbs all look good and he has a strong grip, and even has many energy spurts of wanting to climb around and be his normal high-maintenance dramatic self, but the appetite, sleeping during the day, wobbles, along with sometimes going hours without moving from the same spot, are really concerning to me. If he's been sitting in the same spot, I'll sometimes move him under his heat lamp and he'll immediately turn into his disc-mode and start warming up, like he was cold but was too lethargic to move there on his own. How do I get his health rolling in the right direction? I'm almost positive this was the lack of supplements but if anyone has any other input I'm all ears. Thanks for the help guys.

Well one thing that may be causing his "depression" is that he is in a very small enclosure for an adult panther. He should be in a minimum 2x2x4. I think the lack of proper supplementation hurt too but you already suspect that. Your gutloading with less then optimal items as well. When did you change out your UVB bulb for a new one? The care sheet would be a good way for you to do a double check on husbandry as well https://www.chameleonforums.com/care/caresheets/panther/ 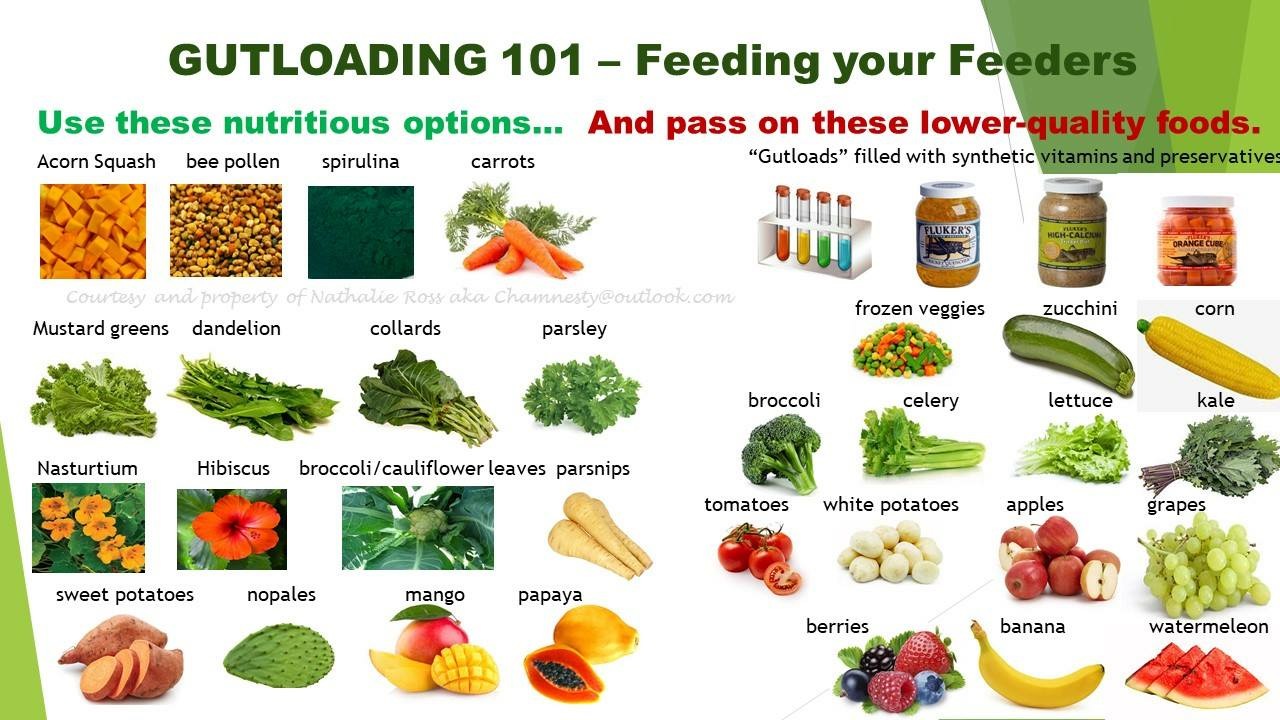 Follow the gutloading chart posted above and be more diligent with keeping the supplement schedule going are the two biggest things to do to turn it around.

I agree, he needs an enclosure upgrade to a 2' x 2' x 4' tall. You should also upgrade your UVB lighting to a T5HO or T8 fixture ad linear UVB bulb to help prevent MBD. If you are using a coil style compact UVB bulb you risk not providing the proper amount of UVB for the chameleon.

Update and still need help. We got him a larger cage per recommendations, 2x2x4, also purchased a mist king but haven't set it up yet. I had to force feed a couple crickets and worms in the beginning, but he ended up eating on his own eventually. Not nearly as much as he's supposed to be eating but you know, 1 or 2 a day. The past couple days hes been super lethargic, in his new cage, will not move up to his heat on his own. At first I blamed this on stress of moving cages, but now yesterday, he kept his right eye closed tight the whole day. I figured I dripped some water in it and irritated it? I put him in the shower and he opened it temporarily but closed it again soon afterwards. Today, he has BOTH eyes closed tightly and hes showing stressed colors. I'm going to schedule a vet appointment tomorrow, but has anyone dealt with this before? Are there any suggestions I can do in the mean time? He's a young guy, he shouldn't be acting like this and I know that.

+1 Repashy has a Vitamin A supplement you could use for dusting. Also some use human Vitamin A poke a whole in the gel cap and put 1 small drop on 1 feeders back once a month. Vitamin A is very important for Chameleons and their eyes.
You must log in or register to reply here.