So I have 2 umbrella tree plants in my freerange. I have had both over 6 months, about 3 ft tall.
Problem is i keep seeing this sticky residue build up on the leaves.
I thought I had not washed the plant correctly when i first bought it so i wiped down all the individial leaves with water and a rag.
This was about a month ago, and I am already seeing some residue buildup again.
Im afraid my chameleon will get it in his eyes and have a reaction.

Anyone else have this problem with umbrella tree plants?

can you describe the residue, pic would be great, what color?
My first thought is residue from heavy minerals in your water, though is not 'sticky', perhaps some kind of fungus?
Are you sure its not poo residue? *shrugs*
Is the lizard an adult male? might be something more personal?
I havent experienced anything like that with mine, just white chalky crap from where water dries occasionally.

hello umbrella trees dont produce any sap most likely what your seeing is "honeydew" made from insects like mites, aphids or scale that are infesting the plant usually a good washing with mild soapy water will kill the insects without applying pesticides hope it helps

i will try to get a pic before the end of day,
it is clear and somewhat sticky. it coats most of the leaf.

my chameleon is about 2 years old now

In Madagascar, some gecko species in the genera Phelsuma and Lygodactylus are known to approach Flatid plant-hoppers on tree-trunks from below and induce them to excrete honeydew by head nodding behaviour. The plant-hopper then raises its abdomen and excretes a drop of honeydew almost right onto the snout of the gecko. 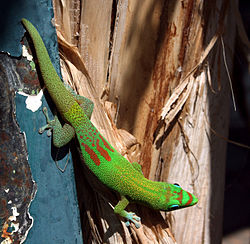 neat trivia!!!!
look very closely under leaves and next to stems they would be very minute and a whitish or lime colored depending on the bug

for as well as i can see it looks like spider mites they nake that white cottony looking stuff. but you still should be able to kill them with soapy water just make sure to rinse well

Id say Brandy's right on the money there Pretty, great pics. Id go with a really good wash with soapy water (if you want to avoid chemicals), leave the soap on the plants (wash the lot and the cage) and maybe let it sun dry before rinsing really well with a good hard spray from the hose.
Hopefully you can get rid of them. I have no idea if such bugs use soil in their lifecycle,
though. If your really fussy you could repot them too?

brandychams said:
neat trivia!!!!
look very closely under leaves and next to stems they would be very minute and a whitish or lime colored depending on the bug
Click to expand...

well on a closer look i did see some flat looking things that look like bugs, not moving though. they came out in some of the pics..

so you thing a mild soap wash will take care of them? do i also put some in the soil ? ive done it before for gnats.

there were 2 pics in there i thought i saw a scale but its hard to tell with pics hopefully not scale is hard to kill. try scraping one off the outside is a hard shell but underneath theyre fleshy like a bug if it is scale the only way to kill them is 1 to remove them by hand or 2 kill the baby scale in early spring while theyre still migrating once they settle in a spot it is impossible to get anything to penetrate the shell but the good news is they have a short life cycle only a year so with some persistence you could probably remove them by hand

so i googled scale and it seems to be on my plant, it said it is pretty hard to kill, but it is possible.
i love having live plants but really hate the bugs that come with..GRRRRRRR!!

Well it might kill the whole plant but you could try bringing it outside on a cold day to freeze the scale insects...no promises though!

jojackson said:
Id say Brandy's right on the money there Pretty, great pics. Id go with a really good wash with soapy water (if you want to avoid chemicals), leave the soap on the plants (wash the lot and the cage) and maybe let it sun dry before rinsing really well with a good hard spray from the hose.
Hopefully you can get rid of them. I have no idea if such bugs use soil in their lifecycle,
though. If your really fussy you could repot them too?
Click to expand...

so i put my plants outside and its about 45 degrees so hopefully mu plants wont freeze and die.. im going to spray em down with some soap mix tomorrow..

I can see a scale insect clearly in pictures 3-4 and 5-6; they certainly are responsible for the sticky residues on the leaves.

Scale are unfortunately, really hard to control. Most of the types of scale that infest house plants have become resistant to many insecticides used in greenhouses.

If one tries to remove the adults physically with rubbing alcohol, or scraping, they will reappear from eggs.

Low temperatures such as 45 deg. (7deg. C) will not harm them. Dwarf Scheffs can take temperatures around freezing, but I don't recommend it, and that still wouldn't get rid of the scale. Most greenhouse scale eggs can survive temps well below freezing.

Soap will wash off the sticky residues, but the hard shell of the scale will protect them from the soap. Still, you may want to wash the plant first before other treatment.

I would disagree; Dawn is very powerful detergent (not soap) and it burns a great number of plants. I would suggest you seek out an insecticidal soap (Safer's, or some other brand) and only use that on plants. These types of soap are made to remove the insect's body defenses with minimal damage to the plant's defenses. I really like Safer's brand and always use it to wash my plants.

However, soaps do not stop the scale. The most effective routes to control scale insects are systemics, and oils.

A systemic is put into the soil and the plant takes it up into it's leaves and stems. This is the most simple and positive way to control scale and mealybug in my experience. Bayer makes the following two products worth considering:

They contain the active ingredient imidocloprid, which is the same thing in Advantage for cats and dogs. Its very safe for people and pets. These products are approved for use on food crops people will eat.

One either pushes the pills into the soil, or waters the liquid into the soil, like a fertilizer. It might require two or more treatments, but then the plants are protected from insects for a long time, as much as a year.

It is a new product, and so for the most part, the greenhouse pests like scale and mealybug have not developed resistance to it.

Of course, these are not natural, or organic. There are oils that can be used that are natural, but they are less effective and leave a residue of their own on the foliage.

The most well-know is neem, which is pressed from the seeds of a tropical tree. It would be sprayed over the whole plant and works by suffocating the insects, even inside their shell. Here's one example ( and no, I don't work for Sears, I just had their site open).

There are many brands to choose from; most are 70% neem. Its better to buy a neem concentrate over the ready-to-spray versions, so you can choose a stronger solution. The eggs of the scale will survive and so one will need to spray many times at regular intervals (at least once a week) for at least two months.

Neem is very safe for people and pets and only rarely harms plants; Dwarf Scheffs tolerate it well.

Other oils can work too. One brand that is popular is trade named Organicide. Its a mix of fish and sesame oil.

Several brands of mixed food oils are available in the U.S. that all contain clove or cinnamon oil; these are very effective on insects, but in my experience, are really too likely to burn plants.

In non-natural oils there are many choices too. Parafinic oils, Ultrafine oils, light horticultural oils, all could control the scale.

Also, be aware that ants can pick up and move scale to plants. One may need to control ants as well, if they are present.

Ultimately, the OP will have to decide if its more cost effective to treat the affected plant, or replace it.

I left my plants outside on my balcony overnight in 45-35 degree weather, I then threw them in the shower and thoroughly sprayed them down with a water and soap mix..(I used my pump sprayer from home depot)

Sticky residue is completely gone, but i still see some scale on there, i would say %90 of them are gone and some of the ones left just flake off.
I am going to put them outside in a few days after they recover a bit from the cold and the wash. hopefully that take care of it for a while...

Thanx for the help guys, I dont think i would have found out what was wrong with my plants if it wasnt for this forum!!

yeah i was just at the store and i was looking at some umbrella plants but i decided not to buy any because all of the leaves, on all the plants, were coated in a clear, waxy film. Im thinking some varieties of umbrella plants naturally produce this mystery residue? so i looked at some croton plants, and they had yellow spots all over, and seemed to have the same film on the leaves... anyone a botanist or have suggestions for better plant varieties?

my hibiscus get this as well.
You must log in or register to reply here.

L
Gnats and sticky clear stuff on ficus leaves in my enclosure!
2