Something is wrong with his eyes :(

Something is very wrong with Aesop's eyes. He was totally fine yesterday, but when I woke up today he was unresponsive to the point of almost being catatonic, not responding to food or even being touched, although his colors are normal. He isn't looking around much, keeping his eyes pointed straight out, so I stuck my head in to get a closer look, and his lids are droopy like he is really drunk and he is tearing up. I'm really worried and I don't know what to do. This happened literally overnight; he was completely fine yesterday. The only thing that has happened out of the ordinary recently was when he ate a roach off of my arm the other day and got some arm hair as well so instead of snapping his tongue back to him, he had to run up to it while I yanked my hair out. It was a little concerning but I feel like if there was going to be a problem from that it would be with his tongue or from eating a few hairs. I don't see how that would have affected his eyes.

I've already contacted ferret about this and am waiting to hear back,in the meantime any advice you might have would be greatly appreciated! I can try and get pictures but it will be tough

Go to get some saline with nothing in it. Drip water on it and flush his eyes. Flush his eyes really well and if that doesn't clear it up, wait for Ferret. That is the best I have to offer.

Thanks for the advice, I am talking with ferret now and may do that. What are you referring to when you say to drip water on it? Here are some pics I got, he is kind of back in his cage so I apologize for the quality. 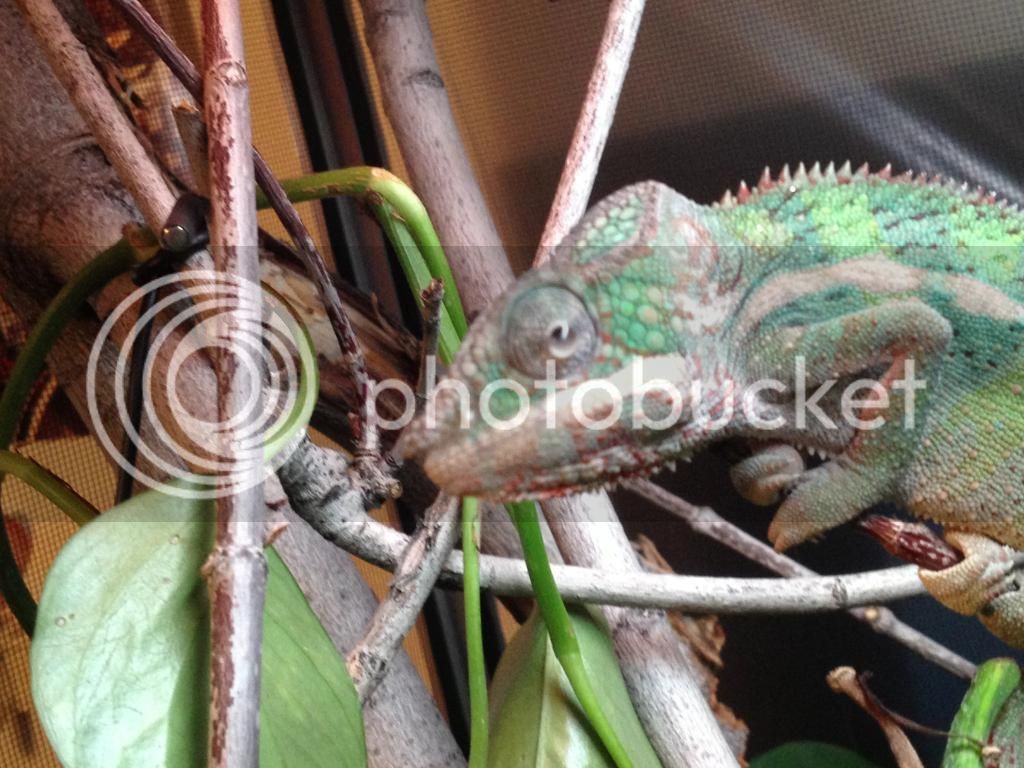 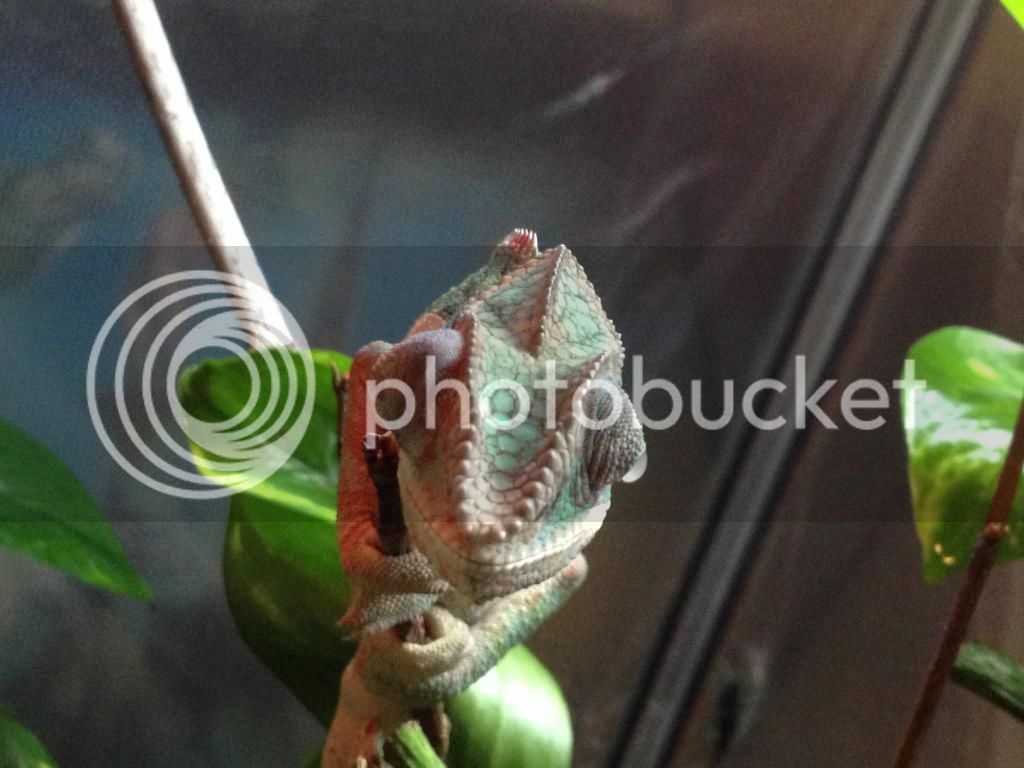 When I have to rinse out a chameleons eyes I do what Dr. Alfonso explained to me once. You get a bottle of saline solution (with no pain meds or redness relievers, like Laurie said. The pharmacist is usually happy to help you find one) and ideally the bottle has the little squirt nozzle.

Then you take the chameleon, try to hold his head steady, and when his eyes are open you squirt a jet of saline into the eye. Use a little pressure, you don't want a feeble jet. You'll see the saline balloon his turret and then you just let him roll it around and wash out anything that is in there. Repeat if you think he needs it.

This was worked really well for me if I had anyone with eye boogers or a piece of debris in the eye. Give it a try, see how he feels afterwards.

Thank you for the advice. I gave him a few rinses, things seem to be a little better but not much. He's looking around now at least. I don't really know what else I can do for him, I guess I'll just wait and see if he needs another one tomorrow.

Staff member
What Olimpia suggested is what I would start with. The fluid buildup that looks like it's there in one picture is unusual. If there is an irritant in his eye that would be consistent with the sudden onset, though a bit unusual to affect both of them. With both affected and the fluid buildup it may be an infection. If they do not look better by Sunday come see me and we'll do a nasolacrimal flush and potentially some medications. Do you have any irritating plants around him? Lots of sap or anything?

Sounds good. I recently redid his cage to a big boy set up, and used maple branches this time. There may be some sap as they were fresher than the old ones. If there is its just like one little drop hiding somewhere (which I guess is all it would take). Other than that it's just a lot of pothos and a schefflera.

He is doing so much better today! He is moving around and looking around and eating and his eyes look pretty much normal. He does have this dark spot right on the edge of one of his eyelids, and I can't tell if thats a foreign body that worked its way out or what. I've attached some pics but its really hard to tell.

Here's how he was looking yesterday as I was flushing him out, the poor guy. He was rubbing his eyes on my hand like crazy. 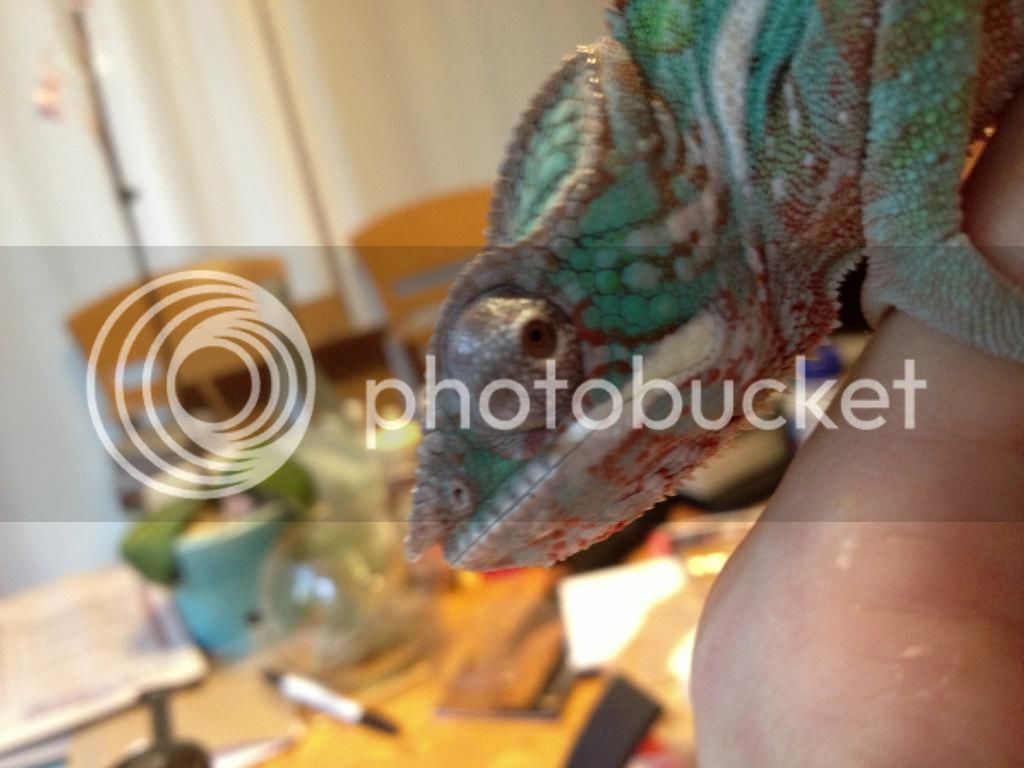 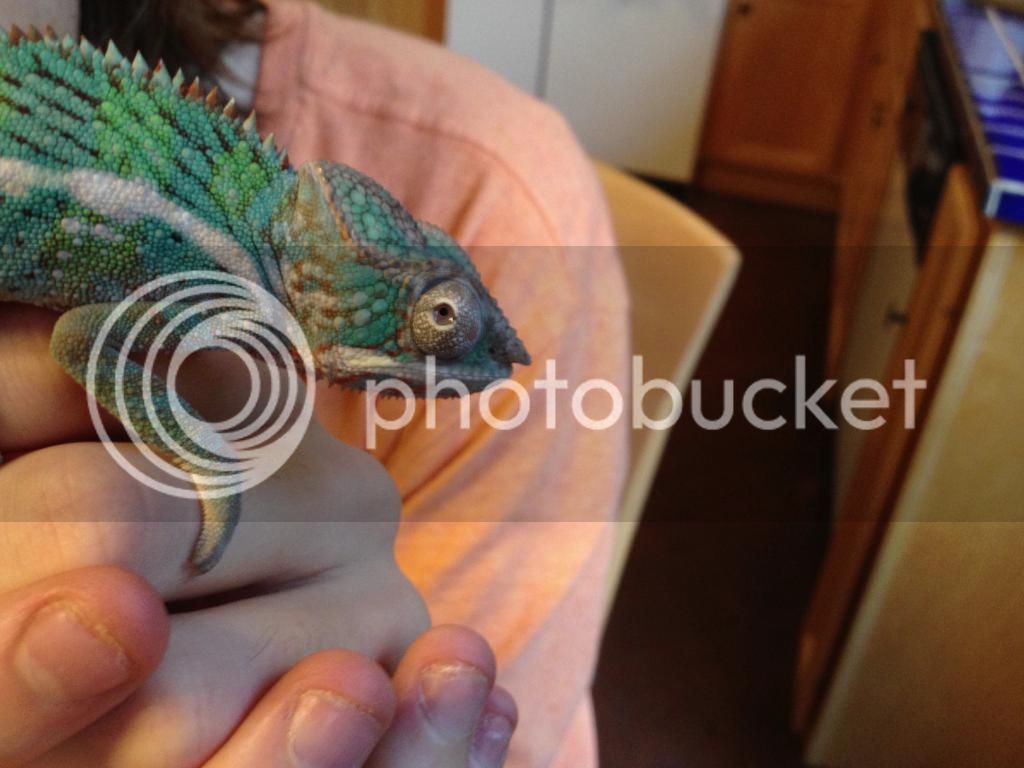 Here he is this morning. You can see the dark spot really easily, its just really hard to tell what it is. 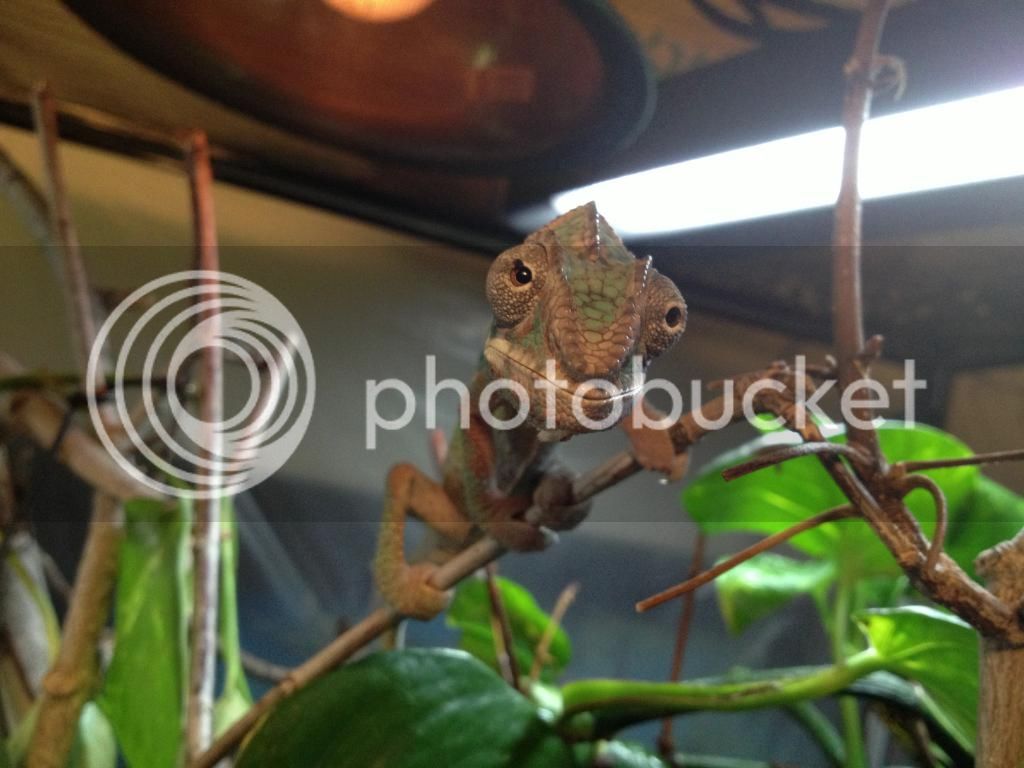 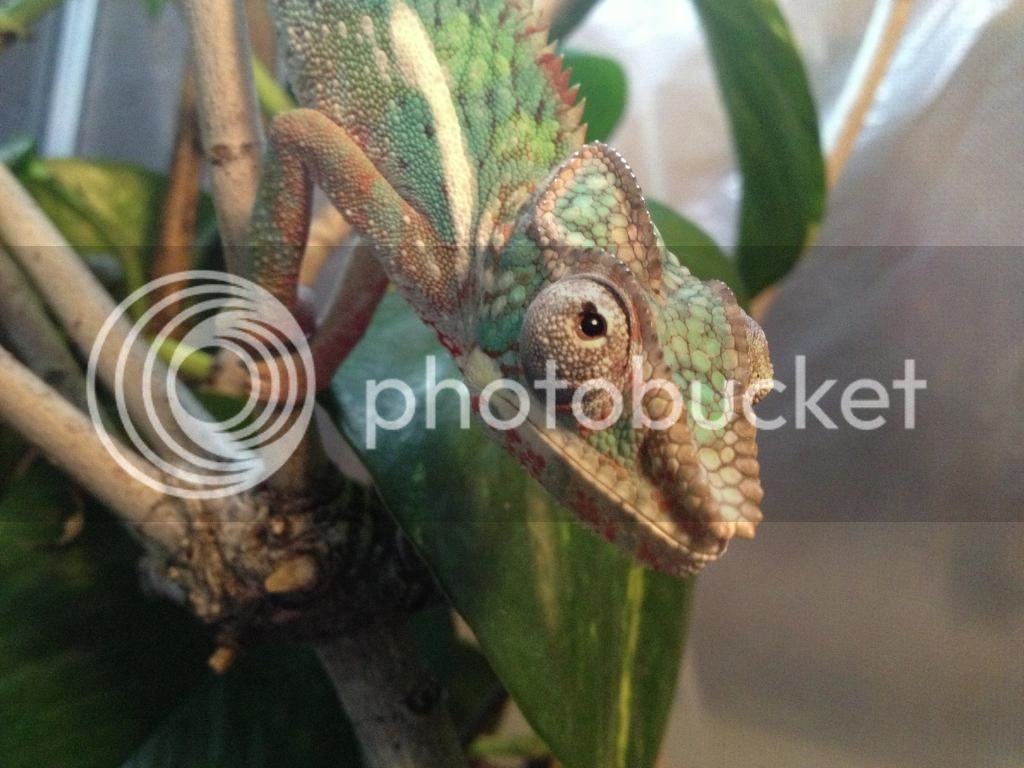 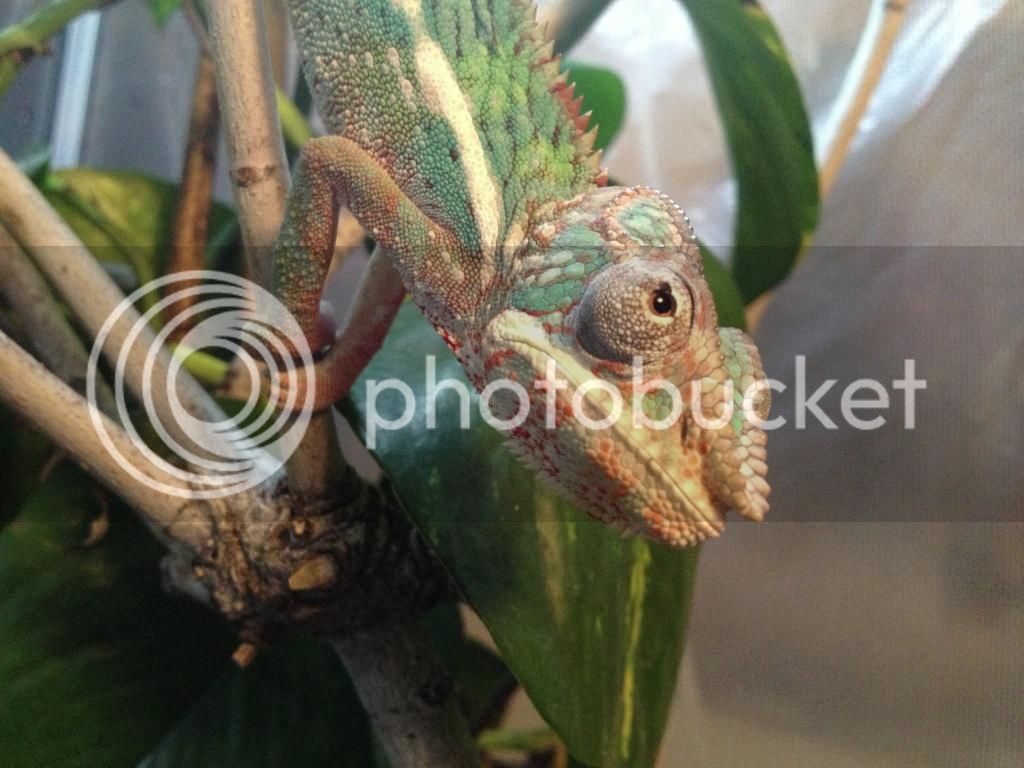 He looks sooo much like my guy! Is he doing better? Btw how old is he...
You must log in or register to reply here.

My Chameleon keeps opening his mouth?