So I went to the Reptile Super Show in Pomona for feeders... 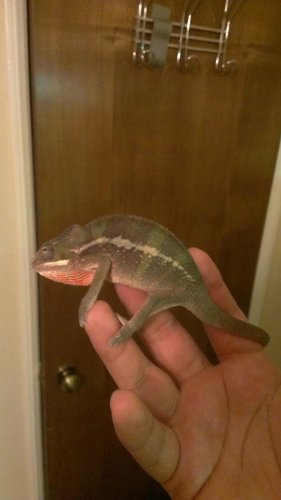 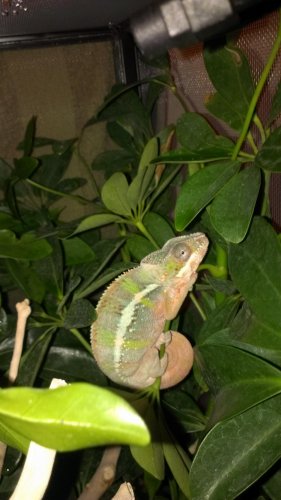 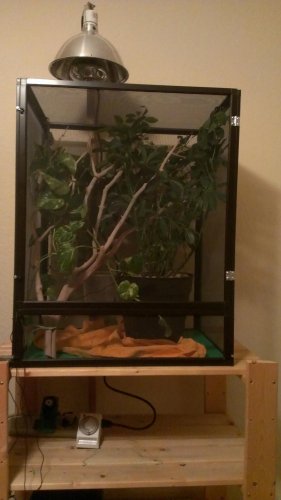 A 5 month old male blue bar ambilobe from the tiki tiki reptiles booth with the Forever Cage from the Kammerflage Kreations. I actually wanted to pick up a Nosy Be from Kammerflage, but they were just too darn expensive for me at that time. So it looks like my 2 month female Nosy Be, whom I've recently decided to name Bay, has a boyfriend, Kaiju.
I actually didn't really have money for him either, but he's a big boy and he was just too beautiful for me to pass on. It helped that my wife picked him out to begin with because she liked "the rainbow one" lol.
I went there to pick up some adult dubia and 100 mixed size to start a colony/ to look around and I left like $420 later (new boy, new cage, new lamp and bulb, baby's tears plant, dubia and dubia food).

I always do that too. Go to shows to get crickets and come back with a load of stuff and bugs. You could never go wrong with Tiki Tiki and the Kammers.
H

Whoa that's weird... you live in Lancaster? I do too hahaha!

Hanzow said:
Whoa that's weird... you live in Lancaster? I do too hahaha!
Click to expand...

What is weird about it?
H

I guess nothing really. It's just unusual for me to run into local people. I guess sometimes I just feel like I'm in this podunk little town that doesn't get internet or something. Maybe it was the wrong reaction lol.

wow, what a great trade!

I have the exact same ambilobe. looks identical to mine. great looking kid!

your setup looks good, but I noticed there wasn't a UV light On top. Im not bashing just wondering.
H

The lamp is a 100w trex active uv heat flood lamps I'm trying out. It's one of those all in one deals. I actually backed it off about a foot because the heat was getting intense. It's good for isolating a basking area. Also, it's like the only bulb that's not made in China besides the Arcadia stuff. So I'll see how it goes and may end up getting a long fluorescent and a separate heat source, but so far so good.

I highly recommend you switch that. I would get the fluorescent bulb type and a separate basking light.
H

Actually the box said 100w, but there was a sticker that said 125w over it so I'm not really sure on the wattage because to my knowledge they don't make a 125w.

If you take a gander around the forums and search the 2 in 1 bulbs there has been a lot of neg. Feedback, so like I previously mentioned I recommend u switch it up.

The bulb will be fine as long as you have the correct temps and a distance of around 10-12" from the bulb. It gets really warm. Dont not let him touch it or get near it.

That cage looks a little small for a forever home

Good work! There's always enough money for another chameleon
You must log in or register to reply here.