Pascal is about 2-3 months I'd estimate. I got him from petsmart ( I know a poor choice, but he appeared healthy and he's been behaving absolutely normally ) I've had him less than a week and he had his first shed. He absolutely hates it when I mist so it makes it hard to increase those and I'm afraid to take him to the shower. I'm guessing he is lacking the supplements he needs because petsmart said they don't really gut load or dust their bugs ( wtf??? ) so he's been eating dusted crickets, dubia, and mealworms ( only a few of these primarily dubia and crickets ) since I got him, about 7 or so a day ( he's picky ). Anyways, after his first shed he's got a small (1/2 ring not full so i don't think it's constricting ) piece of dead skin over his front left leg, some flakes on his left dorsal side, but what is really concerning me is the small patch on his front left side, I'm hoping it's not a burn. it appeared after his first shed and is approximately the same color as the shed. I'm hoping it wasn't a burn ( he did like to sit in a basking spot that I think was too close to the light ( this was for a day or two and I got paranoid of a burn occurring so I moved it promptly )

I tried to take a Q-tip dipped in luke warm water to the flakes to test out that method but the second I touched him it was stress level 100 and so I pulled out immediately. I sprayed him through the cage with the zoo-med shed aid. I'm hoping this works. He's hiding now because I have angered him so I can't get a picture just yet I will when he calms down and is basking again.

All other behavior is normal. I believe and I hope that it is a vitamin deficiency as I have caught him sneaking dirt here and there. Even though this is not proven it is displayed in many animals so I wouldn't be surprised. I plan to go to the store to pick up some hibiscus and other plants today so I was going to pick up some garden rocks as well to stop that because I'm terrified of impaction as well. I'm a new owner, but I'm in grad school and have a bachelor of science degree in biology so animal husbandry behavior and basics aren't new topics for me and when I read about all the potential problems I get paranoid whenever I see something abnormal. Thankfully he's not acting strange...

Hi and welcome. Give me a few minutes and I’ll have a husbandry review for you.

Cage Info:
Your husbandry looks pretty good except for the few things I mentioned. The biggest is supplementation and uvb light. I’ll have to look up the Thrive light to see what exactly it is.
Regarding the stuck shed...chameleons are dry shedders. It is instinct to want to moisten the stuck shed to help it come off, but that can actually make it stick more. I believe the shed aid sprays are more geared towards humid shedders. As long as nothing is being constricted by the stuck shed, just let it come off on it’s own.
Now, the biggest problem that we have here is you didn’t provide any pics of your cham. How am I supposed to get in any little smiles and “awwws” without a pic of a baby cham? ?
Seriously though, it would be great to see your cham and a full pic of your enclosure...lights to floor. Often that gives further insight.

I can’t determine if the Thrive light that you have is a T5 or a T8...Petsmart’s site says nothing about it. One way to determine which it is, is to measure the width of the bulb. T5 are about 1/2“ wide and T8 are about 1” wide.
L

Oh my goodness i just realized the typo ! it's w/o D3 every day, I was very sleepy and scared about him this morning! AHHHH ! rookie typo i'm so sorry. The thought of having accidentally burnt him is killing me.

And Pics incoming! I just woke up from a nap!

lizunzel said:
Oh my goodness i just realized the typo ! it's w/o D3 every day, I was very sleepy and scared about him this morning! AHHHH ! rookie typo i'm so sorry. The thought of having accidentally burnt him is killing me.

And Pics incoming! I just woke up from a nap!
Click to expand...

Phew! Much much better!
L

So I went to my local exotic store to get him a new light. I looked up the thrive ight and you're right it doesn't even say if it's T5 orT8 so I went and got a 24 inch reptisun T5HO as well as a 50watt bulb just in case the 100w is too warm after i've lowered the basking spot.

Here are some photos of him you can kind of see the spot. However I'm terrified now because I as trying to elevate his cage and it fell over and he got knocked to the ground and now i'm worried he's going to die of fright. He seems to be behaving normally and ate 3 crickets.... god i'm literally the worst mom i want to cry.

as for eating he just won't eat more than 2-3 bugs at a time even if there are more he loses interest and moves on. IDK what's up. 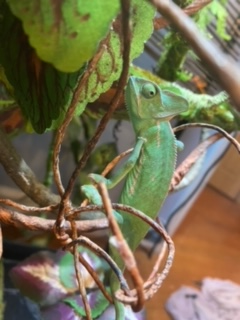 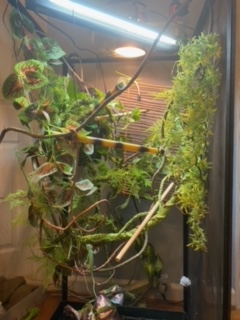 The Zoo Med Shed aid definitely is helping with the spots around his limb and the small amount on his dorsal side - but I can't tell if it's helping the spot yet. It does look more diffuse/translucent then before. But I don't want to spray or bother him any more today after that traumatic episode he probably just experienced. Trying to limit his time with me as much as possible for at least 24 hours. Update on his condition after the fall. He's moving around with no problem at all. Grasping at the cage wall and climbing without issue of his toes. Tail is gripping without issue and there appears to be no step off or deformities there. So far no bruising of the skin or permanent color change. He appears to be a darker shade but hat's expected since he's probably scared or pissed. No display of aggression spots / puffing up / bloating. No edema or deformity of extremities. Eyes are plump, round, and moving without ocular impairment...

I worked EMS before this and am now in PA school so trauma assessments of patients is my go to to make sure things are normal.

He also just ate a smooshed cricket I missed after his last feeding... I try to smash them since it's easier than trying to gnab what he doesn't eat with tweezers. He absolutely hates cup feeding - he must be easily bored by it. but with the holes in the cage from the previous owner I'm afraid of dubia and crickets escaping into my room so I monitor them carefully. I also tend to put them on vines for him to hunt but those fall off and I lose those easily too. Plus I can only do that one by one so it takes forever and I think he loses interest / gets annoyed by me invading his space for so long even if it is for food.

Sorry everyone if this is a lot of posting and words. I'm just a new paranoid owner with a medical background so like I'm hypercritical about every little thing...

I realize you can't enlarge that photo to see the spot. Here is a better one. It's just behind his left arm so it's still kind of blocked. it's about 5 mm in diameter and I wouldn't say it's full thickness more like scales pre-shed when their skin starts to turn white but not bubble and pull up off the surface yet. Another side note for his enclosure the photo above was taken after the toppling incident so the crotan is removed. The crotan is back in there and fills up the front right quadrant space. He loves to move around and just vibe in it. 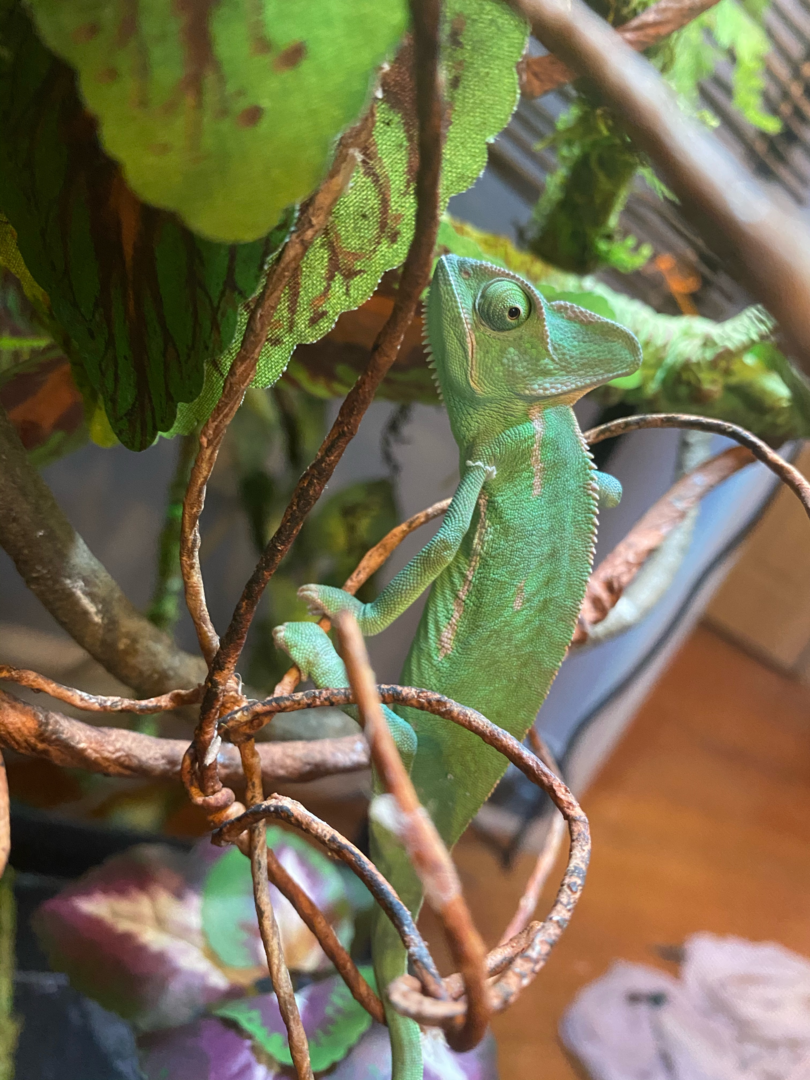 No worries! As long as he’s moving around and using all of his limbs...nothing popping out from his ribs he should be ok. Maybe don’t take him out tomorrow and let him chill and relax. He’s a little cutie! ?
I wanted to see that you’ve got enough branches and vines to climb on (you do) and plant cover to provide shade and hiding spots (you do). There’s several different types of feeders out there, but this one is a favorite of many here. https://tkchameleons.com/products/shooting-gallery?variant=30018608595032 It’s as close to escape proof as you can get. If you get one, get the large and make sure to hang it high enough for him to see it from his basking area. My guy loves his...always peeking in it for food and one night even slept inside it! Just got some for my ladies and they’ve learned quick that’s where the food is.
If you do replace his enclosure in the future, https://www.diycages.com/ has a nice screen enclosure and I can’t sing the praises enough for dragon ledges http s://dragonstrand.com/dragon-ledges/. Some great sites to learn so much about chameleons and their care are https://chameleonacademy.com/ and Neptune the chameleon on YouTube.

Hi I’m also new to the chameleon husbandry thing and I know you’ve got some really great help already. I saw you posted something about a shower drain, I was looking into drain options for a while too and found that they sell 24x24 drain pans that could work too and rig to a bucket, but I ended up getting a “pet loo” which is made for potty training dogs but works pretty great for my 24x24x36, only thing is that I can empty the tray every 2-3 days (depending on how much water runoff) and if you don’t have the time you may want to rig to a bucket instead. Only suggesting cuz I also looked into the shower drain prices and wow ? who knew it would cost soo much for a small piece of floor?
And btw you Cham is adorable! ?
You must log in or register to reply here.