Hi guys. Im new to chameleons. I have one named naveen. Hes and awesome little guy! love love him alot! i have a worry though. Everytime i research these guys, i just constantly ready how fast they grow and how they can be sub adult size at like 8 months? i look at mine, and think, geesh hes not growing that fast. i love the guy though. i just want to show him to ya'll and see what you think. i would love to have a big lizard!


Ive been on this forum before, so i'll fill out the help form

Handling - Probably every other day. Hes really docile. Doesnt ever hiss, or get puffed. He just climbs on my hand. I feel very fortunete (misspell i know...) that i got such an awesome tempered one

Feeding - Mostly crickets. 6-10 1/4-3/8 inch crickets daily. Some free range, some in the cup. Hes cup trained, but i free range some to give him some excitment in life . I live an hour from the petstore. so i just go in every two weeks and load up on crickets. All the other stuff they have there is full grown. I feed him wild insects. flies and beetles and such. i started this about a month ago, but the weather has got cold and i havnt found any for the last week. so, mainly crickets. i want variety though.

Supplements - ReptoCal by tetra fauna. its calium and D3. 1 time a week.
Rep - Cal herptivite. once every 2 weeks (only 1 or 2 crickets dusted)
Zoo med calcium without D# 1 - 2 times a week.

Watering - Drip and mist. i give him distilled water cause hes fancy. i have the dripper run for about 2 hours a day, and i mist about... 4 times a day probably.
I have only seen him acctually drink twice in my life. the first time was when i first got him from the store.

Fecal Description - Freakin' huge! i dont understand how that guy has such big craps! its the lenth of his arm sometimes! anyways he dumps about once a day. his urine package thing is white. Its never been tested. But i will probably have that done sometime. once hes big enough to eat the other feeders at the store, ill stop using wild bugs.

History - got him at zamzows (a local store here in idaho). in late january. he appeared to be less than two months old by quite a bit, yet older than a month... so i think THINK he was hatced in december probably.

he can also get about 6 inches from both lights.

Temperature - I wish it could be warmer. but its hard to make a screen cage warmer than my house! his basking spot is 83. the cage floor is 68. Night temps... never measured. but my house is set to 69 at night and 72 at day.

Placement - bedroom. about 5 feet from the floor.

Problem: hes 6 inches head to tail. 3 head to vent. and ive had him for 3 months. i assume he was about a month and a half when i got him. (hes about doubled in size since then) so i think he is about 4.5 months

Im just checking to see what you all think. Im new to this. I want him to be healthy. i love the guy. hes got awesome color. in full color, hes spine becomes bright orange with black striping. its wicked cool. he also has this "S" right on his side which is cool. Is he just small? or should i be doing something else? or is he just growing right along and i have nothing to fret about? he looks healthy to me...

So im checking on his progress. Am i doing everything right? Is he growing slow? Any thing i could do better?

Last thing i want to add. I dont want to steal this guys thunder, cause he sounds like he has a worse problem than mine! https://www.chameleonforums.com/small-veiled-108593/

Btw he can get alot more color

I know i was bragging how chill he is... its just that my camera pisses him off so bad! its kinda funny haha. thats the only real reason hes mad though.

His size is completetly fine. I do recommend making the basking spot a little hotter by the time he is 5 months old though.

He is not small at all.

Are you sure. when i look at the picture of naveen on my hand, i look how small he is compared to my fingernail.
when i look at this other pic of the veiled (not naveen) which is between (4-5 months) makes me nausuious and compare it with naveen... i feel sick! 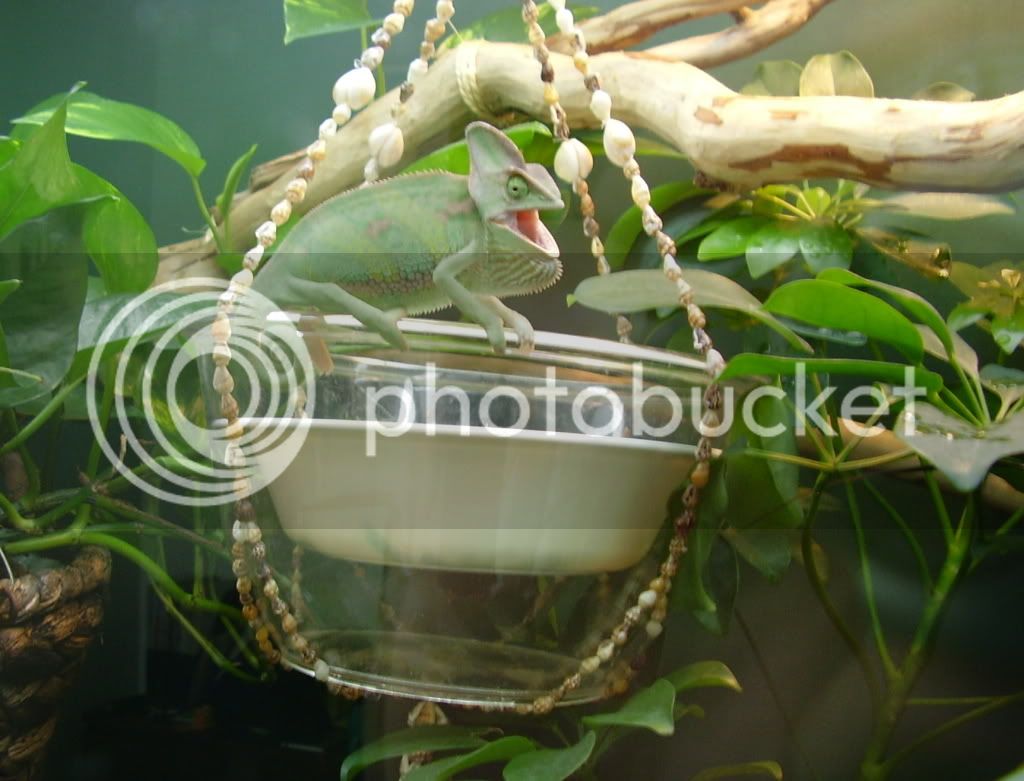 He looks good to me. And you said he's doubled his size since January, which is awesome because I had the hardest time getting mine to eat during the cold weather! Now that it's warm, he doesn't want to stop eating. lol. If he's shedding, that means he's growing

KingJulian said:
He looks good to me. And you said he's doubled his size since January, which is awesome because I had the hardest time getting mine to eat during the cold weather! Now that it's warm, he doesn't want to stop eating. lol. If he's shedding, that means he's growing
Click to expand...

Im going to start doing calcuim everyday. Calcium and D3 twice a week. And herptivitamin every 2 weeks. There is so much info on suplimenting, and i dont need it right now, just one simple question! how many crickets should get dusted?

He looks healthy, don't worry to much about his size.

Hey! Should i move the cage in front of a window to give him more heat?


Me, "Naveen! Im going to start feeding you more so you get big and fat!" Naveen, "*looks at me indifferently*"

I have mine next to a window. During the day when I'm home I open the cage up and hang a vine from the cage up to the curtain rod, in a J shape almost, and he loves being able to go in and out of the cage. Also the D3 should only be given once a month. Too much causes health problems

I would use the D3 once a week and plain calcium at every feeding. A multivitamin every 2 weeks is fine.

He looks fine, but he could eat more if you want. I would feed him mostly non wild insects if possible. Crickets can be purchased by 250-1000 or more online in bulk for cheap. Other feeders would be a good idea too. Superworms, silkworms, hornworms, mealworms as treats, mantids, house flies and blue bottle flies, and pheonix worms would all be good choices. Wild insects carry the risk of parasites and pesticides. Getting parasites could possibly slow his growth or stunt it pretty much all together.

Lancelot117 said:
Hey! Should i move the cage in front of a window to give him more heat?
QUOTE]

No, you're better off having him away from the window so the sunlight doesn't overheat his cage. It might not do so now, but might as the warmer months approach.

B
Baby chameleon has small bump on crest