Hi everyone my son has a 4 month old female veiled Chamaeleon as of 3 days ago we found her on the bottom of her enclosure basically looking dead but still breathing. She isn’t big enough to be egg bound yet but we do have a sandbox in her enclosure aswell just incase. The temperature and humidity are on point. She was still drinking water up to that point. Apparently she wasn’t eating tho as we found a lot of her crickets dead under the sand box and super worms aswell. But she won’t open her eyes and is still barely alive. I’ve called over 15 vet offices who say they treat reptiles but no one is willing to treat a vailed chameleon because apparently they are fragile when it comes to their health! So I have been helping her eat crickets, mealworm Beatles,and super worms. Aswell as feeling her slowly with stage 1 baby food banana and peas to be exact. Does anyone know if I could help her in any other way? Or what is wrong with her. Her color is fine still light green until I pick her up to feed her then she displays her colors. She doesn’t open her eyes although one is starting to open since I started to help her eat and drink. And her eyes are not sunken in. Please help me
M

I'm so sorry you're going through this! Chameleons are indeed tough to care for and have specific needs. Can you post recent pics of her and her enclosure from top to bottom to start? We may ask you to fill out a full husbandry form but let's start with pictures first to assess the situation.

Hi. Sorry to hear that your chameleon isn’t doing well. Most important is to make sure she stays hydrated. ‘Force’ feeding or hydrating can be tricky and if not done properly, can cause aspiration. Chameleons airways are in the front of their mouth, so whatever you give needs to be placed in the back of her mouth. This pic may help. You want to aim towards the blue arrow. 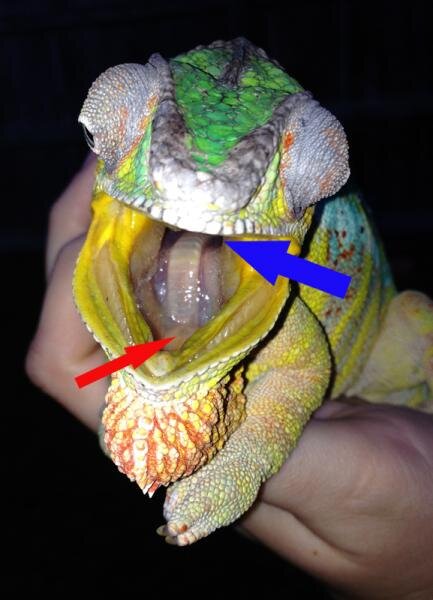 Often chameleons don’t show that anything is wrong until quite late and the younger they are, the more fragile they are. At only 4 months old, I‘m very doubtful that she’s old enough for egg laying. We can try and help you find what the problem may be. If you can provide pics of your girl, her entire enclosure and answer the help questions it would give us more to go by. https://www.chameleonforums.com/threads/how-to-ask-for-help.66/ Just copy & paste
K

Please post some photos of her from the last couple of days and also of all of the cage including the lights.

I'd switch to squash baby food and sweet potatoes.
M

We took the laying box out when she got sick and couldn’t stay up on the vines anymore. The towel was there to help her stay upright Instead of flipping over my son is always switching their lights around so the long zoomed light photo was is on the males cage you can see I’m mad in the backyard

Does your Reptivite contain any vitamin D3? It will say so right on the front of the label.
K

Can you post photos that are closer please. Do you have more than one chameleon in the same cage?
Do you have 2 cages?
The double light ...does it have one heat light and one uvb?
M

MissSkittles said:
Does your Reptivite contain any vitamin D3? It will say so right on the front of the label.
Click to expand...

I don’t think it does
M

kinyonga said:
Can you post photos that are closer please. Do you have more than one chameleon in the same cage?
Do you have 2 cages?
The double light ...does it have one heat light and one uvb?
Click to expand...

Yes we have 2 chameleons in Two separate cages
M

Mcdoogles777 said:
Yes we have 2 chameleons in Two separate cages
Click to expand...

What did you want a closer picture of? The Chamaeleon or the cage

Kinyonga is the best person to help so I’ll step away.
K

MissSkittles said:
Kinyonga is the best person to help so I’ll step away.
Click to expand...

You could reply to the husbandry questions.

The UVB in the longer light..is it a compact too? If so you need to get long linear Reptisun 5.0 or Arcadia 6% tube light.
Are the heat lights white?
M

It’s not compact and the heat is white

kinyonga said:
You could reply to the husbandry questions.

Ok. Will do.
You must log in or register to reply here.

K
what made my chameleon pass