Rebel fell and I am worried....

I went to get Rebel off of his free range and while he was trying to get away from me he fell behind the dresser his free range is on. Talk about panic...I removed the drawers to see if I could get him because I was afraid to move the dresser because I didn't wanna hurt him. Well he had already made his way to his cage stand and was climbing up. My daughter (she isn't afraid of his bite..lol) got him out from under his cage. He was all puffed up and ticked off. I took a couple of pictures because I wanna make sure he is ok. What should I look out for? He stayed puffed up until I put him back in his cage. His grip is as strong as ever, hes using all four legs and his tail is curling and gripping normal. 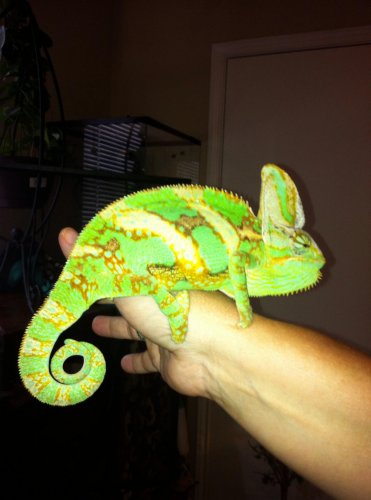 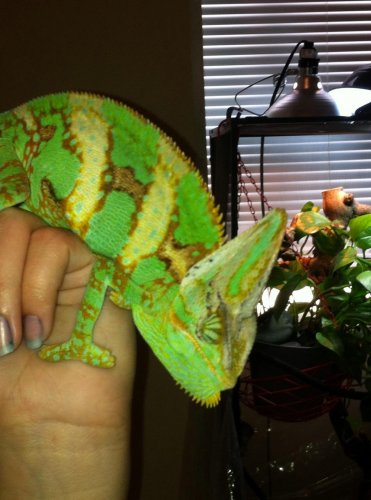 does he appear ok to yall? What should I look for if he has internal damage?

How many feet do you think the fall is? He is so lovely by the way.

Usually if they fall in the wild they get this adrenaline rush thing and it puffs up their body so they are not internally injured badly.

If it was 2-3 feet I would not worry as much, UNLESS he shows signs of stress/sickness/pain.

Anywhere above 5-6 feet should be a concern.

Again just watch his mood and movements over the days and if he acts normally he should be fine.

szpond said:
How many feet do you think the fall is? He is so lovely by the way.
Click to expand...

4-5 feet... Thank goodness the floor is carpeted. And thank you. Hard to believe how much I love him. We call him Mr. Puffy Pants because he puffs up, hisses, and lunges like hes gonna bite your hand off but most of the time its for show...

I have had my chameleon fall from about 7 feet and he was ok.

Thanks for the fast replies. So far he "looks" ok but I won't be sleeping well tonight. I'm a major worry wort...

carol5208 said:
I have had my chameleon fall from about 7 feet and he was ok.
Click to expand...

Even at a lower level they can still injure themselves if they fall right.

It's a good thing they can withstand 7 feet though.

I don't think you should worry much if there is carpet x
You must log in or register to reply here.

He is acting weird

A
HELP! My panther hasn’t moved from its sleeping spot all day!!!