One my of babies won't stop eating his own tail

Staff member
Any trauma to the tip of tail prior? Any discoloration? I wonder if this could be something neurological or perhaps an internal infection…

I wonder if there is an issue in the tip of the tail if an amputation would fix it??? (No experience leads me to this idea…)
E

javadi said:
Very odd. However there's more of his tail left than I was expecting.

The good news is that as long as it doesn't get infected, he should be fine as far as overall reproductive ability and activity. I have had baby chameleons where I had to amputate almost the entire tail, and they grew up fine and without issues. This is surprising since chameleons use their tails so much but from my experience it works out OK. If he keeps doing this regardless of your efforts, and the tail gets bitten down to even shorter, chances are he simply won't be able to reach it anymore and he will just have a stub tail for the rest of his life. Then the problem will resolve that way.

One could try the approaches above to see if that helps (hand sanitizer). You could also apply neosporin to it, which is generally considered safe in reptiles, to keep it from getting infected, while also acting as a deterrent to biting. Personally, if it were me, I would watch the tail carefully and just make sure it's not showing signs of infection. Then I'd let him keep doing it so the problem resolves itself that way, and he will either stop or won't be able to reach it anymore. Alternatively, I might just amputate the abnormal, damaged regions of the tail as needed if infection was apparent. Or, have a vet do it (probably the better approach).

Now onto some more speculation with limited evidence behind it in reptiles. Pica is a condition wherein humans eat bizarre things like iron, paint, etc. and this is suggestive of a nutrient deficiency. You could modify your supplement regimen (increase the usage) and see if that does anything. Just a blatantly speculative idea but interventions like this can work in humans with a similar condition. Might be worth trying.

You mentioned having to amputate a tail before. I'm curious what the healing process looked like in this. Thanks!

ElleArranda said:
You mentioned having to amputate a tail before. I'm curious what the healing process looked like in this. Thanks!
Click to expand...

Healing process was very easy and fast. The key is to leave the tail as vascularized as possible and cutting right at the boundary of the dead tissue vs. living tissue. It can then be cleaned immediately after. If husbandry is good, the cut doesn't even need further treatment and will usually heal without issue. Once healed the end of the tail is more blunt, but doesn't look bad.

Edit: I am not advocating for folks to do this at home. This is best done by a vet.

Can you please provide an update? This is a unique problem that may arise in the future for other members. Also since you have a bio setup, have you checked for forgien growth of plants, moss, etc that may be an irratant? I do know that stuck shed at the tips of the tails can cut off blood flow and i would imagine if that occurred a cham may try to release it themselves by biting it. Btw Black Friday is upon us and a great time to get a deal on a camera for the cage.

I’m not the OP, but this is a nearly fully grown furcifer lateralis that had most of her tail amputated. As active as any others and doing well! So amputation or loss of tail is not a death sentence. 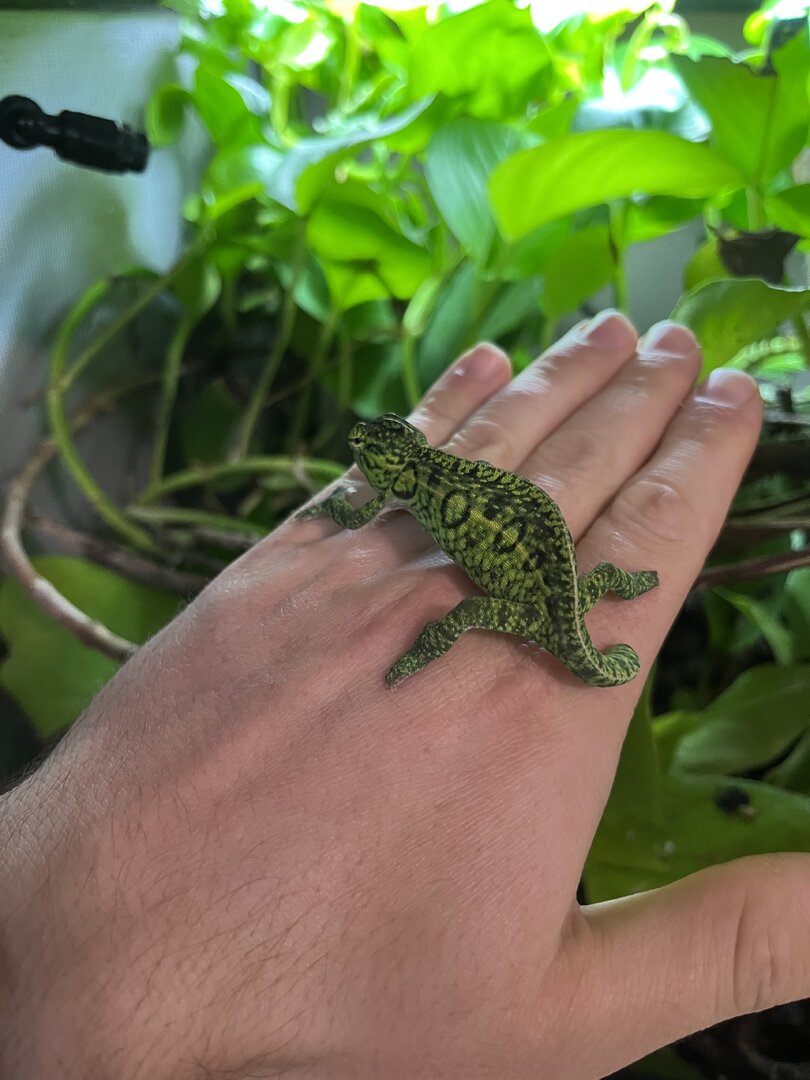 Wow! I've never heard of a chameleon eating it's tail. Hope your chameleon gets better!
You must log in or register to reply here.

My chamelon rango has trouble eating
2 3