Not so new owner.

Hello! My name is Alex and I'm from Moscow, Russia. I'm a very nervous person by nature, and even though I've had a chameleon as a pet for half a year now and am able to keep him seemingly healthy and happy, I still worry that I'm doing things wrong. So I would like to put my husbandry up for revision by the wonderful community of this forum

Meet Vitalya(again, I'm from Russia, so don't be put off by the unpronouncable names). 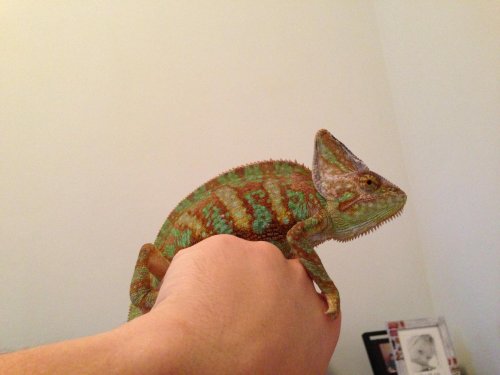 Vitalya is a Veiled Chameleon, he's approximately 7 months old(the breeder wasn't able to specify his exact hatch date, somewhere in mid November, he said). Vitalya's quite an *******, to be frank, when it comes to handling, so I don't do it much, maybe once a week, but I still love him. He got used to me after a couple of months and will let me hand feed him, but won't take food from anyone else. Sometimes, when he's really hungry, he'll even run to the front of his enclosure to see if I have any food for him. He sheds regulardly, allthough I'm a little concerned that he always has bits of old shed skin left over on him here and there by the time he starts a new shed. 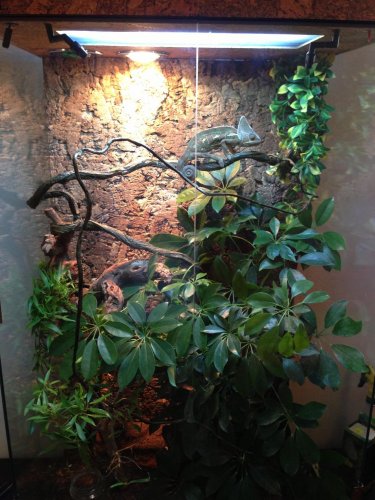 I have a custom made vivarium 23,5x18x47(41 if you don't count the top part where all the lights are hidden). The top of the viv is 71in above the floor. The viv is in my bedroom. Next to no traffic there, apart from when I sleep there, feed my cham/clean the viv, or clean the room. Allthough, recently I was bedbound in there for almost a week with a nasty case of pneumonia and Vitalya didn't seem to be bothered with my being there.

As you can see, the viv is a full glass tank as opposed to the screen cage that the caresheets on this site advise. The reason for this is the cold, long, Russian winter. Once winter hits the streets of Moscow, the radiators turn on and they suck the air dry of any signs of moisture. Having a full glass tank helps with keeping the humidity levels at a stable 20%.

I have an Umbrella Plant in there and some kind of Ficus, along with a grape vine branch and some Lucky Reptile vines. There's also a little metal statue of Vishnu in there, cuz I didn't know where else to put it

As you can see, I have substrate, against the caresheet's advice. I've been told by the people who made this viv that having some soil substrate is safe as long as I use a type that is safe for chameleons to consume, should they choose to do so. Following his advice, I put some drainage on the bottom, some fertilized soil on top of it for the plants, and then covered it all up with JBL Terra Basis reptile safe soil.

I have 4 diffrent lights in Vitalya's viv. 3 of them turn on automatically every morning and stay on for 12 hours. An ExoTerra Repti Glo 10.0 for UVB. A regular flourescent light just to provide extra lighting. A concentrated 40W bulb for basking and another one of those, painted green as a night light that is set to automatically turn on if the temperature in the viv drops below 59F. This is just a precaution, in case the heating breaks in the appartment during winter.

For water I have an Exo Terra Monsoon RS 400 mister that is set to automatically turn on for 15 seconds twice a day(we went down from 5 times a day to twice a day about a month ago, cuz Vitalya's a big boy now). I check his urates daily for signs of dehydration, but they're always white.

I feed Vitalya every 3 days with crickets(once a week I treat him to a few locusts and a couple of stick bugs) lightly coated with a 50/50 mixture of these vitamins:

This cocktail was advised to me by the guy at the herp pet store that I always go to. The dude keeps several chameleons so I trusted him. These vitamins are one of my big worries, because they're not exactly what the caresheets on this forum say they should be. One of them contains some D3, and my cham gets it every feeding, allthough the guy at the pet store said that there's a very small amount of D3 in that mix so it's safe to give it to my cham every feeding.

He eats about 15-20 crickets at a time. I gutload the crickets with carrots.

My main concern are Vitalya's resting colors. When he has his PJ's on(couldn't get a decent pic), he'll be a stunning light green with some lilac spots all over and light yellow stripes. When I take him out of the viv, he gets angry and looks like the first picture in the post.

But when he's just chillin' inside the viv, he's always this dark: 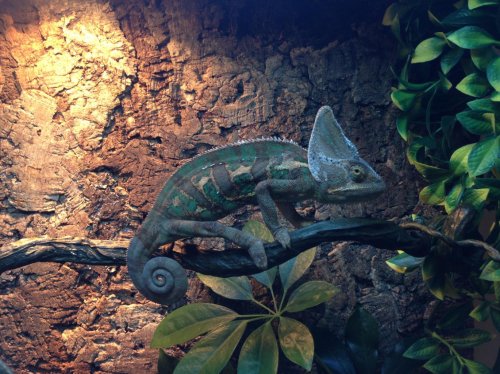 Is this dark color normal? Or does this mean that he's not too comfortable with my care?

But that's not all, folks! 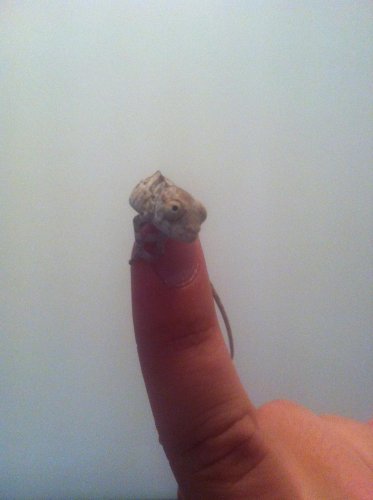 Pavlik is a Panther Chameleon of an unknown locale(the breeder got him by exchange and doesn't know what Pavlik is exactly. He thinks he might be a Nosy Be). I got Pavlik 1 month ago. Back then the breeder told me that Pavlik is 3 months old, so that would make him 4 months old now.

Pavlik setteled in quite nicely from the get go. He gobbled up like 20 crickets on his first day at my place, and I saw him drink a couple of times.

He doesn't run away nor does he try to hide when I come close to the viv but he does run away from my hands when I try to handle him(which I only did twice so far) and he tried to hiss once, which was like seeing a lion cub trying to roar like daddy

I'll describe his husbandry before I ask my questions about him, and there are a few.

No substrate, just a potted Ficus Benjamina inside with some of that reptile safe soil, covering the fertilized soil.

This viv is, obviously, temporary. Once Pavlik grows up a bit, I'll make a bigger one for him and this one will be sent back to the store, as it is on loan, basically.

The humidity levels inside bounce from 40% at night to 50% during the day.

Water. I mist him by hand 5 times daily. I've seen the little guy drink and check his urates daily and they're allways nice and white.

Food. He's on a staple diet of crickets. For the first 2 weeks, he'd eat about 20 small crickets a day, but now his appetite seems to have culled a little. Sometimes he'll eat 10, sometimes he'll eat 15. I'm concerned that for the past 2 weeks, I'd only have to refill the guy's feeder cup once every 2 days because he'd always leave some crickets in there(I put 20 in every time). So I only throw in some carrots in the cup to gutload the feeders when there are some left. The feeders are lightly coated with the same vitamin mixture as Vitalya gets(link above) every feeding.

I have several concerns about this little guy.

1. His size. If he is indeed 4 months old, then isn't he kind of small? The first pic I posted of him here was taken on his first day with me, but he's been here for a month and he doesn't seem to have grown much at all. I'm asking because when I got Vitalya(he was roughly 2-3 months old as well), I could see the guy grow by the minute. Could he have parasites or something? 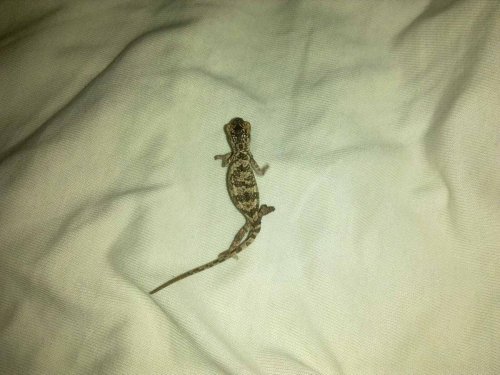 See how his tail is bent at a near perfect 90 degree angle to the left? The breeder told me that he's seen this kind of deformity in chameleons before. It doesn't look like he's in pain because of it or anything and he does use his tail to grip onto branches and he does curl it up like normal.

The reason I'm asking about these things here is because, to my knowledge, there are no qualified vets in Moscow that would have specialized knowledge about chameleons. Both breeders that I've dealt with for my chams told me that I should only take my pets to the vet at the Moscow Zoo and only as a last resort, becuase a visit to the vet with chameleons in Moscow would most likely result in the death of my animals.

Dark colors mean stress, maybe its the sight of the other small cham? Sexual maturity? He does not look like hes turning black, just a little darker. I wouldn't worry too much.

Do you have a humidity gauge? For Veileds I would keep the humidity around 50-70. As long as its in that ballpark you should be fine. 20 seems a little low.

The small Panther is the real issue here. A vet would really be able to tell you better. I think that maybe a vitamin supplement might help. I have never had issues with worms or parasites on my chams, but I do know wild-caught chams come wrought with them.

Many might advise against glass, but I think its fine. I have never had problems with my glass enclosures.

Good luck dude, I hope someone with more experience might advise you better about the little guy.

Thanks a lot for the responce

Dark colors mean stress, maybe its the sight of the other small cham?
Click to expand...

Definately not that. He's been this way since before I got the little guy. Besides, the first time Vitalya saw the little guy, he immediately shot out his toungue at him. Thank God there was the glass and thank God Pavlik didn't see that, else the little dude would have had a heart attack xD


VigilantSpearIII said:
Do you have a humidity gauge? For Veileds I would keep the humidity around 50-70. As long as its in that ballpark you should be fine. 20 seems a little low.
Click to expand...

Yeah, I do. Guess I should get myself a humidifier for my bedroom and see how that works out.

More like Chameleon owns the owner. Ever since I bought my Veiled, I got so hooked that I'm trying to find reasons to go to work on weekends because that herp pet store is nextdoor to my office. All that shiny repti stuff and all them fancy feeders!
You must log in or register to reply here.

Chameleon staying on one leaf?