Nacho, my 15+/- month old male Yemen Veiled Chameleon started to suffer from MBD in January. Thought I was gonna lose him but he's a trooper.

Doing really well now, eats great and even tried to mate with my female when she was receptive. I have the enclosure divided in half with a 'hammock' I made.

The last week or so he's been trying to venture down more and get past it. He has been very active. I wonder what to do. I have a lot of branches in the enclosure and to create the hammock I had to cut and sew a cloth in about 12 different parts. Not an easy task to move it but I'm hoping for some advice from you guys.

If I try to move it down any further I won't have the anchors on the side. I'll find a way to make it work. I just wonder if giving him more space is what he really wants. Freedom? Maybe this isn't as much a Health Clinic post as a Behavioral post. 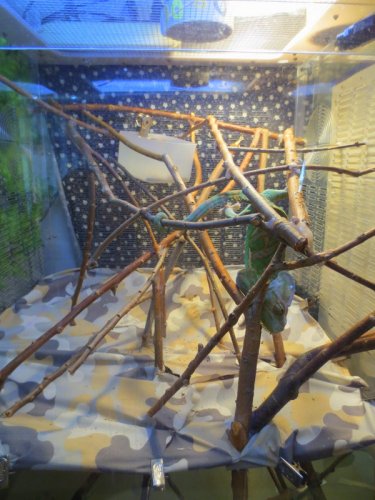 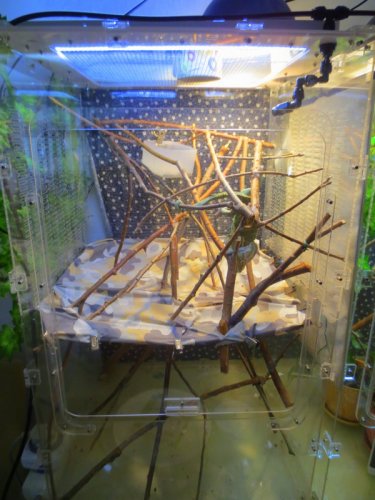 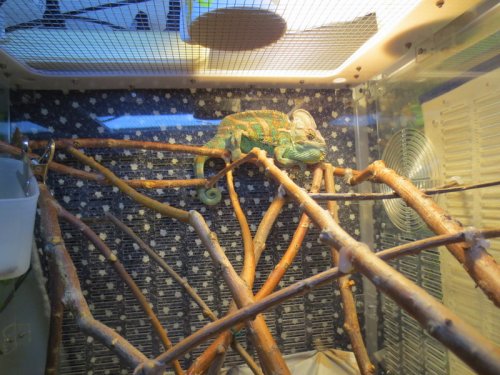 How come you have no plants in there?? Fake or real???He needs some places for security with plants. Also, how did he get MBD?. Was that determined? No uvb or calcium, both??? what kind of enclosure is that???

I think that if he's doing better and is stronger that it's ok to go into a larger cage again. It's ok to create some safeguards if he was weak and falling (or at risk of falling) but if he's active again and strong then I think we can trust him with a full-size cage (you can still lay a towel down on the floor if you still feel he needs it), but I don't think he needs the half-cage anymore.

How big is that cage total?
G

Carol....No plants or anything because it was difficult for him to get around and would often try to grab them but could not hold himself. I also regularly add branches or cut out branches based on his daily needs of getting around his enclosure. My Chamies are in my living room so I can watch Nacho, from afar, like a hawk, to help him up or whatever he needs.

I live in Northern China...vet care is impossible...I'm intelligent enough to determine from posts and pictures that he and his brother both started symptoms of MBD at approximately 8 to 9 months of age. Yes, is was a combination of poor UVB/CALCIUM and husbandry. It's a plexiglas enclosure. Yes, I know it's not recommended, but as I said earlier.....I live in an area where most 'modern' things are not available.

I think I'll start by putting the hammock.......You know what....I'm gonna just take it out and try the towel in the bottom. As usual I'll watch constantly and can add or cut branches as needed as usual. Ha ha ha ha ha. Thanks for the help.

I can see you we're trying to help because he could fall and break a bone easily but not giving them the right humidity is just as harmful. You may want to stick a few small Potted plants in that portion you have him in right now, that way he can drink off of the leaves as well
You must log in or register to reply here.