Help me to help a friend

I have a friend with a nosy be female who isn't doing well at all. I have 2 chams already and I am debating on trying to save his.

She isn't doing well at all. Not eating. Not drinking. And her eyes are sunk in. I heard she can't see.

What should I try here? I want to help but is it too late?

I know this is generic info, but I hate hearing about his sick cham

I don't know what the problem is, but I'm sure a shower would do a world of good for her.

Staff member
Does she have a laying bin in case she has eggs? She may be eggbound.

I told him about her being egg bound a few months ago.

But I can't say for sure.

He is currently bringing everything he has over to my house.

I really hope she makes it and I can help.

How can I get her to eat if her eyes are closed and she isn't active? I am thinking of grinding a cricket to paste and force feeding her.

I need a plan ASAP as I am hearing she is really bad.

Makes me sad. I hope I can help.

I really need to know how to get her to eat.

I just got a txt that she has mouth rot also.

I think she has everything that's bad.

I would never try to spam this site (sorry mods) but she will be here in 20 minutes.

Does anyone else have any other ideas to help me save this Cham???

I really want to save her.

Also are any of her issues at all contagious??????

Now I am starting to worry about her getting my 2 perfectly healthy nosybe's sick. My boy Clarence is my prized possession.

Please say that this is not something my healthy chams could get.
W

Without knowing everything wrong with her definately quarantine her.
Please check the how to ask for help section above in this thread and get As much info as you can from your friend when he arrives.

She just got here. She is beyond egg bound. Mouth rot. Both eyes look sealed.

Man o man. This isn't good at all.


Any help is appreciated.

I am going to move her into my bathroom away from my healthy chams.

i would suggest a visit with the vet..

I will have to see what my funds are like tomorrow am. I wish I had the cash to drop on a rescue to go to the vet. I am going to call in the am and see if he can work out a "rescue" deal.

I know she is egg bound. She is wider then my 9 month old male. She is way too wide.

it is a shame she was left to get this bad..i wish you and her the best of luck

I am sorry you were put in this situation. From what you are saying, at this point the only way to possible save her is a vet that knows chameleons or maybe even humanely euthanising her so she does not have to suffer. Alls I can say is what IS wrong with people??? Shame on your friend.

https://www.chameleonforums.com/how-ask-help-66/
I'm sorry your friends Cham is sick. It is great that you are trying to help but it sounds as if she is so sick she needs vets help ASAP . Without specific info, pics etc we would be unable to help as most of us here are not vets. I would suggest she is taken to the vet now, fill in the above form and we could perhaps help with feeding , hydration and husbandry. Good luck and please let us know how she is.

well last night was a really long night. Even though I tried to get some sleep, I couldnt stop thinking about what I took on and really hoping that there is no way that my 2 very healthy chams wont catch anything. Clarence my male is very important to me.

I have my 2 chams in my living room, and the new sick one is in my bathroom that is connected to my bedroom, so she is one hall, one bedroom, in a bathroom. So I hope that is quarantined enough. Obviously i am not mixing anything between the sets of chams.

This morning she didnt look as bad as she did when she was sleeping. I got her to drink for a good while. Last night I found a box that was as big as I could get into her cage. My apt building has planted some new plants around, so I went and dug up as much soft dirt as I could get into the box. and placed it into her cage. I set her into it, she hissed, sat in it for a second, then starting climbing up and out of it. So atleast now she knows its there for her to use. One thing that was weird was how she felt. She felt so hard (if that makes sense) my male and other female dont feel like she did.

I know she is egg bound. I wish I would of snapped a pic this morning but Ill get one on my lunch. I was running late for work and had so much to do this morning I just ran out of time and forgot.

Her eyes are open, she can see, so they arent sealed shut. I dont think she has been eating due to being egg bound. But there are supers crawling around in her cage for her to eat if she wants. I didnt put in any crickets.

I really wish I had the 200-300 to take her to the vet, but right now I dont. But honestly seeing her today, I feel a little better that she can pull through this.

I already really got on my friend for letting her get this bad. Im going to see if I can get some cash from him, if he can give me half then I could get her into the vet.

you may want to wrap her cage in a cloth so she has absolute privacy - if they even think you are looking, most will not lay - and yes, I would tell your friend the least he could do would be split the bill - lack of husbandry and not researching before he got her ( no bin for her ) he should at least split the bill (if not pay for all of it ) best of luck , we are all here to lend support

Went home on my lunch.. Gave her a long misting, and I force fed her one superworm and she ate it. So that is an improvement. My friend has not been successful in getting her to eat.

Can someone please confirm that there is no contagious disease that she could possibly have that could make my other chams sick. I do have her quarenteened at the moment.

Here she is. HER name is Mr.Jones. haha cant say why she has that name. kinda funny I guess. 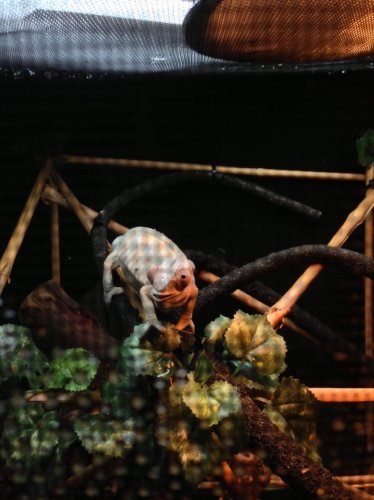 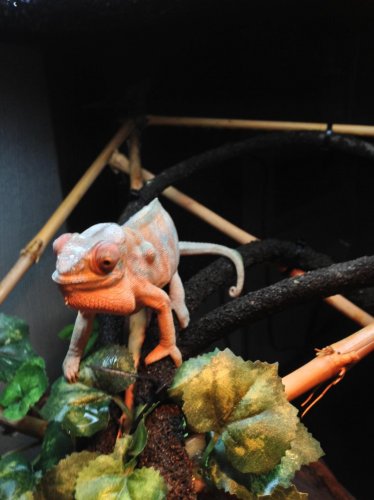 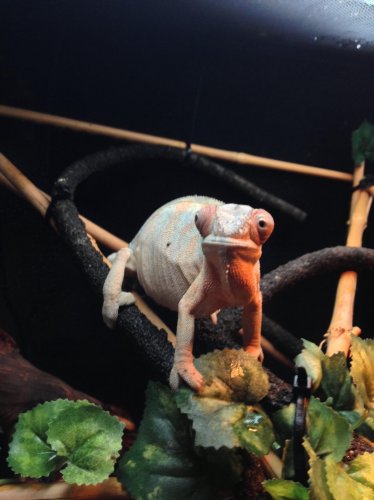 Any other opinions? I should of got a pic from above so you could see her girth.

She needs a vet.

If shes egg bound, she needs the oxytocin to get her to lay the eggs.

Her mouth rot needs meds to treat it.

Is her gular area always puffed like that, or was she just pissed?


as for diseases, without a vet to confirm, you wont know,

I dont recall it being always puffed like that. She was upset at me trying to take her picture, and also this was post misting. So she was grumpy.

Just wondering, because if shes always puffy, it could be caused my edema.
You must log in or register to reply here.

Help with a sick chameleon

male "laying egg" that's not there?