Hello all! I've been trying to find information on keeping, breeding and incubating campani and I haven't really found any concrete info other than very general montane species care. I've been able to acclimate my pair quite nicely, but my female recently laid a clutch of 8 eggs. I've read several conflicting literatures about incubating the eggs ranging from very short incubation times to very long/no diapause to very long with diapause. Can anyone please help with more accurate specifics!?! Any help would be greatly appreciated!
-Mike

Mine are at a flat 70 and will remain. Not sure when the will hatch but I was told to do them just like carpets, their nearest relative. It is working for at least 2 of us so far. Best I have to offer.

I will send you more info after dinner.
view our sponsors

thank you so much! any info is greatly appreciated. how long have your been incubating?

I have only been incubating since 5/3. Both mine and my friends eggs have a yellow cast but that is normal according to the guys in Europe. Kev just got his second clutch yesterday, 16 eggs. As little as campani are it would not have thought they could carry that many.

My campani was kept the same as my quads are, cage temp 65 - 67ish, basking 73- 75ish Night temps were at least down to 60. Julie loved water, loved food and would take your finger off - or so she thought. She had no fear, thought she was a great big monster. The hardest part with Julie was is was soooo hard not to over feed her she was just so cute. She was also very active. Forgot i kept humidity at least 60% and usually closer to 80%. Only time I let it drop was to dry her cage them back up it went.

I did not have a male so I sent her to Kev who has a male.

If you have any other questions shoot me a pm, I am really happy to know another person with campani's. Do you have any idea where the others went?

laurie said:
I have only been incubating since 5/3. Both mine and my friends eggs have a yellow cast but that is normal according to the guys in Europe.
Click to expand...

This is my current experience as well. Clutch of 9, slightly yellow tinge. One egg in particular is HUGE, but the others have looked pretty good thus far as well.

Cameron B said:
This is my current experience as well. Clutch of 9, slightly yellow tinge. One egg in particular is HUGE, but the others have looked pretty good thus far as well.
Click to expand...

Cameron do you have a pair or just a female? We all have to stay in touch, as rare as campani are in the us we will all need to swap bloodlines. My female came in gravid. Did you guys get gravid girls of breed them here?

Mario Vermunt and other accomplished Furcifer campani breeders that I have chatted with about incubating eggs for this species all report the eggs require a diapause for incubation.

Motherlode Chameleon said:
Mario Vermunt and other accomplished Furcifer campani breeders that I have chatted with about incubating eggs for this species all report the eggs require a diapause for incubation.
Click to expand...

I have read the same. I believe Necas also said the same. I had also heard the same back in the day for lats, but truth be told, without diapause I and one other person have seen the best success.

I cannot speak for Campani. It's been since mid 90's since anything was last let in up until now, so the best we can do is hope and try.

I'm so happy to know a couple more keepers with Campani and some! Quads and Montiums have been my top 2 species to work with since I started my chameleon infatuation. Maybe some day I can swoop some quads from you!
These little jewels are winning me over quite fast too! My male is nice and big and very robust. Not shy, but doesn't like to be handled. My female is quite smaller than he is, but very beautiful. A lot more calm and not so shy. She doesn't shy away at all. I have been keeping them at slightly higher temps and acclimated really fast. Ambient: 75, Basking: 83, Night: 65 They seem to really love these temps. I've got misting: 3: 15 min and 2: 30 min plus fogger every 2 hours for 3) mins.
I bought a pair with the female gravid. They do eat everything in sight, so I have to moderate feeding as well.
We all definitely have to keep in touch so we can help each other out. I'm gonna stick to what you've recommended as far as incubation temps. I've been bugging Jurgen, but he's not really giving me any specifics about incubation. Maybe I'll try him again. I was gonna try Mario, but he hasn't been on in a long time. Figured it would be a lost cause. Happy to be in touch!

Btw, I was also a little nervous cause my eggs had a yellow tint to them, but glad to hear it's normal. Here's to hoping the best success with our clutches!

I cannot speak for Campani. It's been since mid 90's since anything was last let in up until now, so the best we can do is hope and try.
Click to expand...

Cameron, your friend may be theis the same friend I am working with. We will have to talk.

So far I'm just taking educated-guesses with this species.

I am not using a diapause. Carpets are reported to need one, however, they definitely do not require it. I have 100% hatch rate with nearly all carpet clutches and have not used diapause in years.

That being said, how do I know campani do not require it? I don't. So maybe I'll be incubating these eggs and get no babies at all. I will find out in time. I am treating them like lateralis and seeing what happens since they seem similar.

Mine have been housed outside since I received them, but I've only had them since early June. That's not long enough to know whether or not they are doing well. Just appears that way. It often does at first with WC animals. I'm concerned with getting babies to hatch and taking it from there. The first couple eggs were laid from retained sperm (2nd clutch since importation) from Laurie's girl Julie. The latest clutch of 16 was the result of her breeding with my male. Gestation was less than 30 days, even though Necas and others report 60 days (even on this forum from breeders). Again, that's the same as my carpets so I just went with what I'm used to.

They have been exposed to 50s at night and near 100F during some days, just like my carpets and quads. Lots of water and shade buffer the extremes.

So long story short, who knows if I'm doing the right thing. Given that Mario and Jurgen (Kamelons JVO) are successful and use a diapause, then that might be the way to go. Here are a few pics for fun. Laurie's girl is on top. I didn't photograph the male (they aren't that pretty). 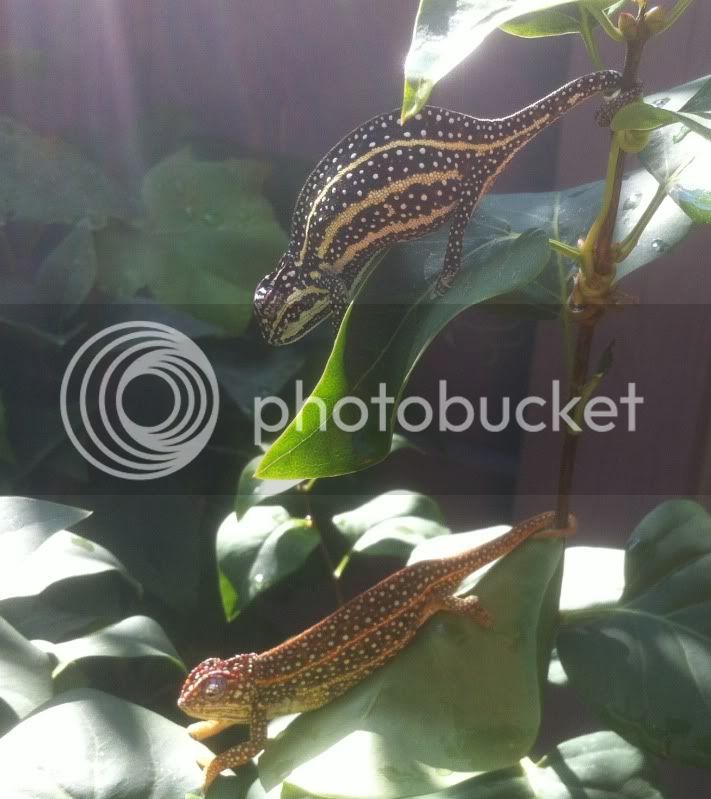 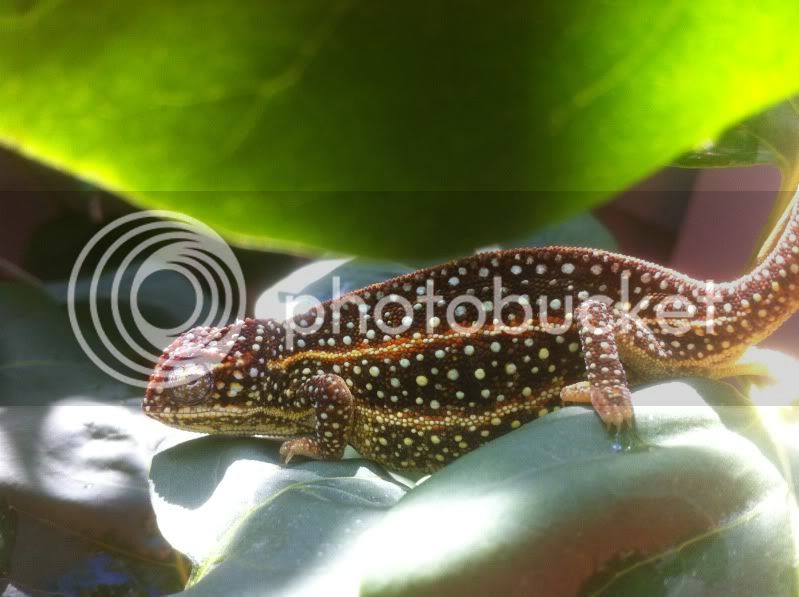 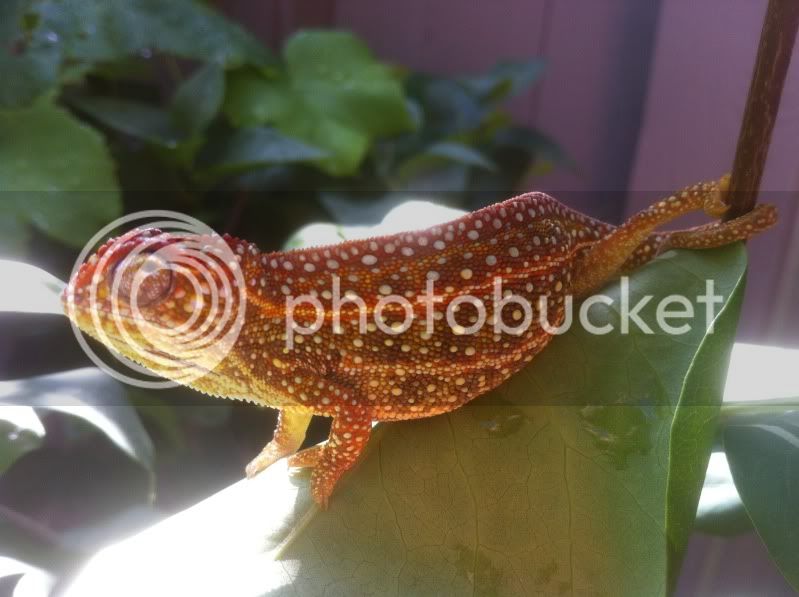 Can someone please post pictures (if any available) or describe what a receptive female looks like? My female has been mostly florescent green ever since she laid. Once in awhile gets this cool camo pattern going, but mainly just bright green with powder blue eye turrets. When she was gravid she hardly ever got that awesome black with white and red spots pattern that you see often online and she doesn't get that red line that most females get above her eyes either. She is kinda small, but came in gravid (WC). Just wondering when it'll be time to introduce her to my male. Thanks.

When I did campani way back when I did the diapause method, but that is because that was what was published in books- I didn't breed them long enough to try anything else. I sold my group to buy panther chameleons when Madagascar shut down because rumor had it that all chameleons would be cut off and I figured I had the best chance of multiple generation success with panthers.
It is nice to see them back in the hobby- they are really beautiful little chameleons.
C

I'd like to chime in.. I'm not sure but I've been told Campanii eggs need to be in a 1.5 month diapauze at 8 degrees celcius.