Hi, my first post here. I am looking to get a chameleoon, having never had one before. I have various books and although no experiencew with reptiles have kep a variety of mantid species for over 30 years so I do have experience looking after (ie keeping warm, feeding, spraying) animals.

I guess my question is simple: what is the best "starter" species, ie the hardiest, the easiest to keep? Am also keen to get captive bred cos I'd hate to think I was contributing to the denuding of the wild.. any help would be gratefully apreciated! Thanks.

Well...your insect knowledge should at least help you with the feeding of a chameleon.

Chameleons need appropriate light, temperatures, gutloaded insects, proper supplementation depending on where you live, and appropriate caging to start off with. They are not the easiest creatures to keep in captivity...but with proper care can do well.

If you have any questions...this is a good place to ask them. There are lots of people here who will be able to answer them.
G

Thanks for the replies guys. This forum seems a great source of information, I'll be doing a lot of reading! Out of interest, is there a smaller species that is also relatively easy to keep (Veiled etc seem pretty big!) 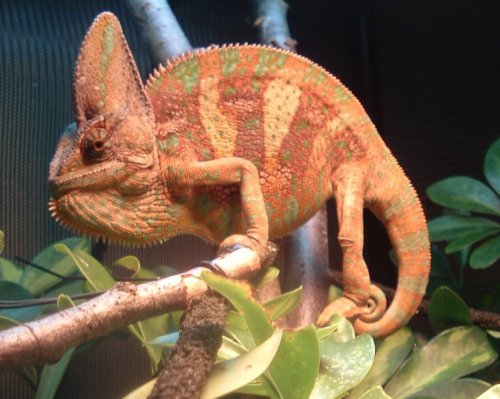 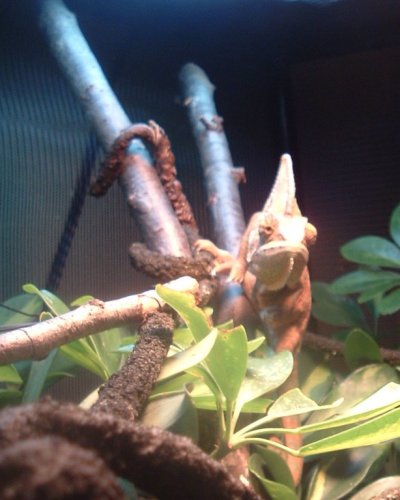 The first picture is kind of something you would want to show off because he is aggravated. Looks big, showing some nice colors and who does not like a vieled with alot of orange.

Second and third pictures are what you can expect to see alot of the time when owning one. While they look big from the side the second picture shows how narrow they are in comparison. The third one shows just what a dramatic differance in size they actually have.

The main thing with owning a male veiled (and panthers) is getting enough room for the cage and other various stuff. An adult male recommendation would be about 2'x2'x4'.

I like veileds because they are a more active species, nice colors and easier to take care of in comparison to other chameleons.
Last edited: Feb 10, 2007
You must log in or register to reply here.

My first post! Getting my first chameleon on Saturday! Last minute questions...
2