I’m looking to get a premium Veiled Chameleon and have never used an online breeder before, from all my research FL Chams repeatedly comes up as the #1 breeder. But I can’t seem to get an answer to my question. Does FLcham ship outside of Florida?

CrispyToastSticks said:
I’m looking to get a premium Veiled Chameleon and have never used an online breeder before, from all my research FL Chams repeatedly comes up as the #1 breeder. But I can’t seem to get an answer to my question. Does FLcham ship outside of Florida?
Click to expand...

They are known for being hard to get a hold of . @jannb will have babies . I’m not sure how soon you want one . She is amazing , her babies are gorgeous .

Recently from my experience and others they have been shipping from PA. I was surprised because I live in FL. Still got my chameleon in a timely manner and he was ok. As @Kristen Wilkins said Jann will have babies if you are willing to wait.

Decadancin said:
Yes, they ship outside Florida.
Click to expand...

Thank you so much!

I'm not sure what the price difference is for a "premium" veiled chameleon, but I linked the sponsor's site and shipping info.

Fl chams is where mine came from. No problems FYI

I bought my panther from FL Chams in October 2018. The guy was responsive to my texts and I am happy with the chameleon.

My one and only annoyance with them was the shipping situation. I paid $35 or whatever it is for overnight shipping. Once the FexEx shipping status finally registered it told me 3 days. I reached out to him and asked what was up and he claims that it was FexEx's mistake and they are falsely claiming that he delivered the package too late to them to make the overnight cut-off. He then told me he is going to dispute this and get my shipping refunded. I checked in a few times on this and he eventually stopped responding. So I don't know if FexEx won the battle or if he gave up, but either way I would have liked a final response from him with the outcome.

I ordered him for delivery on Saturday and this was October in the northeast. Due to the delay, I did not get him until Monday so he sat in a box for 3.5-4 days, in 50-60F temperatures. There was a heat pad included that was no longer warm by the time I got him and I was also worried about hydration. I let him out into his cage and he was completely fine, began eating almost right away. I highly recommend ordering early in the week to avoid a Sunday possibly interfering with delivery. 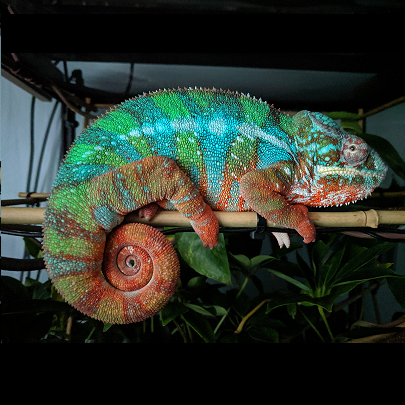 I recently purchased one from them from the Jethro bloodline. Not really any colors yet. I've heard a lot of bad experiences lately about shipping from different locations, hard to get a hold of ect. But he did arrive healthy and responsive, just not sure about the "premium" part
You must log in or register to reply here.

G
Anyone have similar experience with FlChams?
2