You know how males can be somewhat spiteful at times, are females just as bad?
K

Females can be just as bad as males, especially when they are gravid!

my female his horrible, i am not mad at her though. shes just scared and defensive.

my female is actually very loving.. when i clean her cage she climbs up my arm and sits on my shoulder! 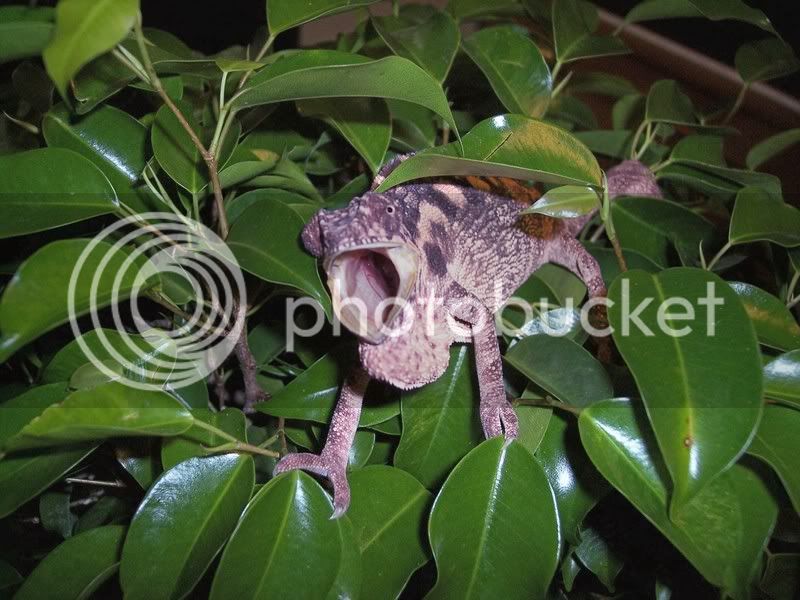 I think she looks healthy, don't you?

she looks very healthy, lol......i suppose we can be safe to say, that all chams are different.

As far as Veileds go... If they don't fight back... I'd be suspicious of sickness!

In pretty much all the stories I've heard about someone saying, "my chameleons is so friendly and doesn't hiss or bite" its always come to be that the chameleon in question had MDB or another sickness that just made them too weak to put an angry face on.

Veileds definetly have a large personality, but they are by no means less fun to keep.

My female veiled is evil. I have not picked her up in quite a long time. I know I am bigger but she is intimidating. You usually want to make sure where she is when you put your hand in the cage. As long as I am not in her territory she is cool and not really to bothered by me.

I love veildes, to me they have huge personalitys for their size. I think it is comical the "Attitudes" my veild gets. If you are looking for a cuddly animal dont get a Cham, let alone a Veiled.

I have had male veileds that will come out on my hand and actually wait at the door of the cage to be taken out when they see me in the room. However...one male that I had would literally chase me down the branch to bite me....and he was always like this. I had to be careful breeding him because if he could see me, he would take his "anger" out on the female who was doing nothing but giving him signals that she wanted to mate.

Females have been the same...some nice, some grumpy. One of my females used to give me "indications" that she wanted to be moved to the egglaying bin. She never would lay the eggs in the small bin in her cage. Unlike most females, she was not even grumpy when being moved to the bin or just after she laid the eggs.

They are all individuals...and just like humans...have their own personalities.

I have had male veileds that will come out on my hand and actually wait at the door of the cage to be taken out when they see me in the room. However...one male that I had would literally chase me down the branch to bite me....
Click to expand...

This is what i say to people who have "friendly" veilds either "wait till it grows up" or "your lucky".

They definatly do have there own personalitys sex dosent really make a difference from what i have found(asside from gravidness), but generally speaking veilds are agressive and pissy things even though there are "some" freindly ones out there.
K

Brandy said..."generally speaking veilds are agressive and pissy things"...but their bright colors and antics help to make up for it, don't they??!!

Amazing how a species can have a general attitude!!
Our male Veiled seems to be the reincarnated Warlord of some really mean folks, and I think our female is too! Pantera is named so because of her feirce PMS attitude....she is not a panther but a Veiled....and she pretty much looks like this all the time too...

No wonder we've only been able to breed them successfuly the one time!! The photo is blurry because we were both moving.....she was coming to open a can of "Whoop A**" on me, and I was shaking hoping I could take the pic before I got a beatdown!

IvorySerpent said:
The photo is blurry because we were both moving.....she was coming to open a can of "Whoop A**" on me, and I was shaking hoping I could take the pic before I got a beatdown!
Click to expand...

LMAOooo....tooo funny!
You must log in or register to reply here.

M
Baby panther or something else?