I know this has been posted a couple of times, but I have to ask. Anything concerning the eyes is cause for panic in my world and this hasn’t happened before with her. Just to ensure I am doing all correctly, am answering help form.
- Female veiled. Age unknown. Sub to full adult?
- handled rarely & only out of need
-had 2-3 sm/med discoid roaches and 2-3 med/lgsilkworms last week as break from crickets. Just got tiny crickets (didn’t realize how small they’d be) & eating about 12-15 daily. Gut-loaded with bug burger, apple, sprouts & carrot. Feed her in morning.
- Earlier this week switched to Repashy Ca+ with Lo D. All feeders lightly dusted. Was using the calcium no D daily with multivitamin and calcium with D3 alternating once every other week.
-Mist King runs 2 mins, 3 times during her awake hours and 15 sec 3 times during night. Two days ago started again running cool mist humidifier approx 4 hrs/night.
-poo is formed solid dark brown/black pellets with white urate. Still trying to get a poo to take for a fecal. She hides them in her plants & I don’t find until dried out. Just saw vet who said she is healthy.
- Came from stepdaughter who had her for several months and incorrect food, lighting, supplements etc. I’ve had since early June and thanks to CF, have corrected all that I’m aware of. No idea where she came from initially.
- Upgraded recently to XL Reptibreeze 2x2x4. Two sides covered with shower curtain. On Reptibreeze stand and top of cage is about 15+” from ceiling. Has 13x13x13 lay bin with moist play sand permanently for when she’s ready. So far, she isn’t.
- Reptisun T5HO with 5.0 bulb, 24” centered on top. 60 w basking bulb in dome next to it. Both on timer, on/off 12 hrs.
-Basking area about 8” down is mid to hi 80’s. Ambient range mid 70’s to low 80’s, depending on gradient. Use both laser temp gun and thermometer/hydrometer combo.
- daytime humidity 40-50%. Hard to check at night as don’t want to disturb her beauty sleep. Humidifier had just gone on when I checked last night and was 70%. Aiming to achieve 100% at night.
- several live plants...Pothos, dracaena, parlor palm. Schefflera was dying so had to remove. Have mass cane waiting to go in. Few fake silk plants to enhance her coverage. Fake vines until I get off my butt and cut some dowels. Plant lights pending budgetary constraints. Perhaps someone can suggest economical options in super simple terms (premedial plant lights for dummies)
- she has her own room and only traffic is me few times a day. Door kept closed to protect from cats and dog. AC vent mostly closed but it blows no where near her. Window next to her but sun doesn’t hit her directly.
-live in Central FL on space coast.

When I fed her this morning inner circle of both eyes was puffy and she was squinting when aiming for food. AIM was spot on though. Puffiness waxed/waned and not long after disappeared and seems back to normal. Based on past posts I assume she was just needing to clean her eyes, which she did. Am still concerned though. 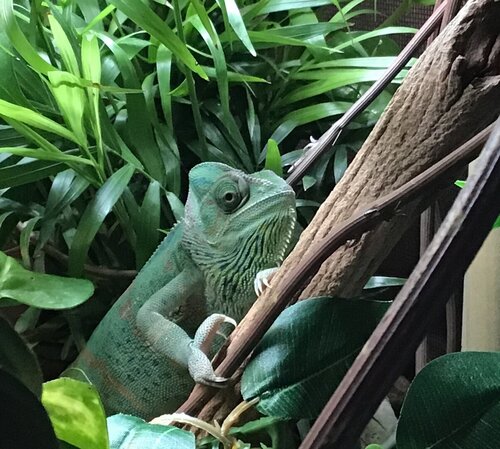 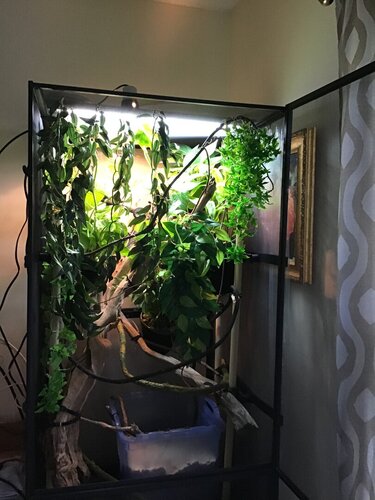 No something is going on there, we need a video.
view our sponsors

I'd consider making a vet appointment just to be safe.

In my experience, swelling like that is usually from something being in the eye irritating it or the start of an infection.

Brodybreaux25 said:
No something is going on there, we need a video.
Click to expand...

Crap! Was afraid of that. Am currently out running errands, but will try to get video later when I get home.

Graves923 said:
I'd consider making a vet appointment just to be safe.

In my experience, swelling like that is usually from something being in the eye irritating it or the start of an infection.
Click to expand...

Miss Grumpy’s vet visit last week was with reg exotic vet. I’m really fortunate as there is a cham specialist who does house calls here...Dr Oppenheimer. Used to be active breeder and forum member. Will have to call him and see if he can see her.

Contacted the vet and waiting for his reply. Both of Miss Grumpy’s eyes are puffed out again, more than before. Pardon my video quality...she hates my phone & not easy to hold iPad while moving other hand around to capture eye range of motion.

What do you think @Brodybreaux25? Not yet hearing back from cham vet and don’t want to let it go thru the weekend. Should I try to get her into reg exotics vet in the AM?

When is she due to lay?

Brodybreaux25 said:
When is she due to lay?
Click to expand...