i have a 4.5 mon.oldmale ambanja, and he is perfectly healthy and active.

is he way small? if he is, its surprising!because he eats and drinks all day long!not to mention the size of his belly!

thanks a bunch
C

I would think your scale is off because that weight would be anorexic...even my littlest girls weigh like 25 grams.

is he way small? if he is, its surprising because he eats and drinks all day long! not to mention the size of his belly!...
Click to expand...

Howdy,
That does sound a bit low in weight. At that age, my Nosy Be' was about 25-30 grams. Is it possible that the age is in error? 16 grams would be about right for a ~3 month-old. Do you have a history of his weight progress? It all may just be hanging on a growth spurt.

Here's the weight chart for my Nosy Be' male panther. I got him when he was 3 months old at 9 grams and he weighed 15 grams 11 days later... 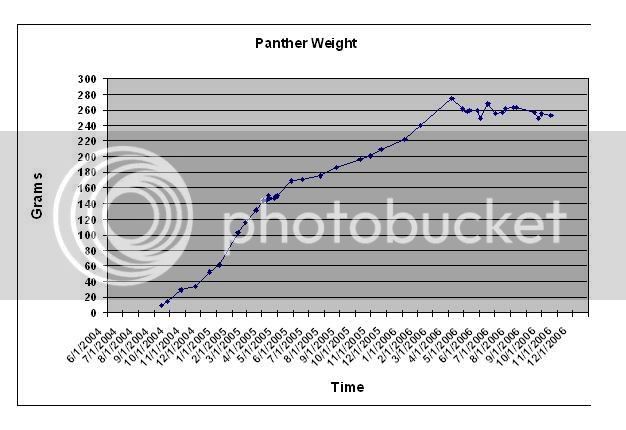 Dave, I've asked this before in a previous thread, but I'll do so again just in case...

Do you (or anyone else) have a weight chart - like the one you just posted - for a Veiled cham?

Sorry I don't have data before the age of ~2yrs old and ~4-5yrs old on these two male veileds. That's because I adopted them in March of 2005 at that age!

What's interesting to note is:

Timid is much smaller than Grandpa.
Neither had much in the way of advanced watering techniques before arrival.
They were mostly fed crickets before adoption from the family who couldn't keep them anymore.

Grandpa went out for "stud services" in April '06 at a peak weight of 274 grams and came back a month or so later at 247 grams. His weight continued to drop. At 223 grams he went to the vet. The vet found 3 types of parasites which are now being treated with Panacur, Flagyl and Albon. After two weeks, he is now up to 237 grams. 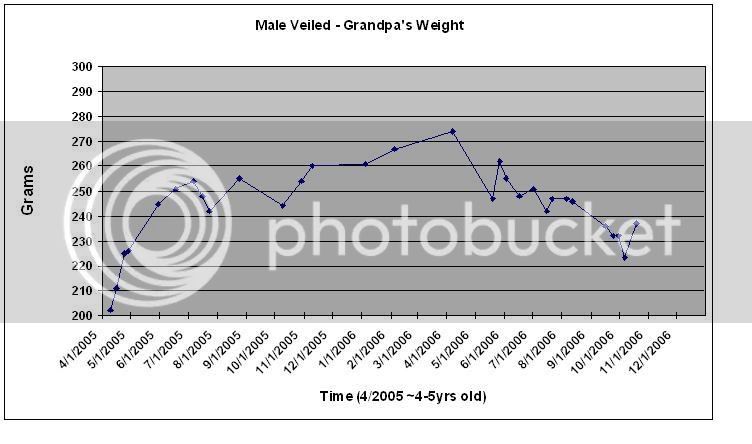 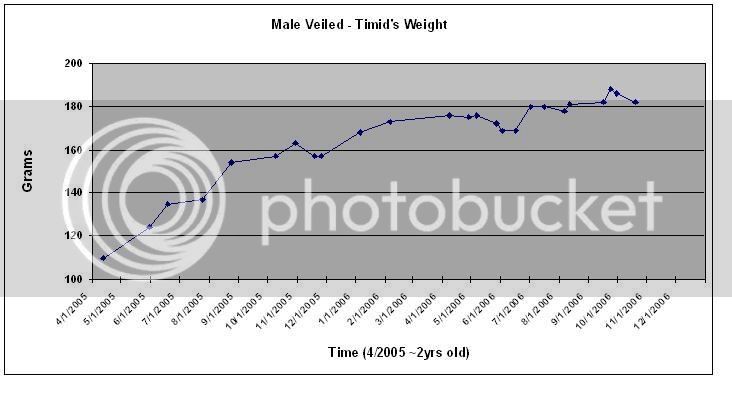 the scale shouldnt be off, but that very possible

westcoastchameleons said:
the scale shouldnt be off, but that very possible
Click to expand...

Checking the accuracy of your scale is easy enough. One milliliter of water weighs one gram. Get a hypo and start putting milliliters on the scale. Play with the "TARE" function of your scale and a lightweight container...


A relavent title would be nice, not to mention more likely to get you better replies.

no problem, although i didnt check the scale yet, i got a ,ore accurate weight on my male.18-20 grams, for my 7-8in. total length ambanja juvnillle chameleon.o ya, 4.5 months

Staff member
Dave, thanks for sharing your data.

A relevant title would be nice, not to mention more likely to get you better replies.
Click to expand...

I agree ... I will update the thread title to 'chameleon weight' for search purposes.

Checking the accuracy of your scale is easy enough. One milliliter of water weighs one gram. Get a hypo and start putting milliliters on the scale. Play with the "TARE" function of your scale and a lightweight container...
Click to expand...

Nice tip. Something else that may work is the inaccurate 'nickle' test. An american nickle weighs about 5 grams.
You must log in or register to reply here.