Thatcher said:
Oh yeah she lovesssss the dragon gel and it has supplements and all the nutrients needed in it! I still use other stuff with it though because variety it good and I'll buy that beardie ball!
Click to expand...

I’ll have to try that gel. Maybe it’ll help Spike eat his salads. He’s such a stinker and just throws them around instead of eating them.

MissSkittles said:
I’ll have to try that gel. Maybe it’ll help Spike eat his salads. He’s such a stinker and just throws them around instead of eating them.
Click to expand...

Same! I offer my beardie kale, and carrots but if they aren't in her face she'll throw them around lol

Getting them to eat their veggies can require some tough love. Letting her go without bugs for a week or two won't hurt her one bit.

Ol' Stinkeye wouldn't touch greens/veggies (or fruit) until after his first brumation. Yesterday he ate his first strawberry (in 2 years+) and actually liked it.

Here's the list many beardie keepers go by:
http://www.beautifuldragons.com/Nutrition.html

All dragons tastes are likely to be different. Stinkeye is partial to baby bok choy, and most of the "greens" (dandelion, collard, mustard, turnip).

I still give him live feeders once a week, which falls in line with the 80/20 ratio. He gets excited/animated when he sees the bug bowl coming or going, or me shaking my hands as I do when dusting.

This new diet has also helped him lose some fat; he looks better, is more active, and wants to come out & 'socialize' (sit like a lump in Missus' window) a lot more. We had a guest last week, and he sat on her lap for over an hour before getting restless.

I'm having trouble finding any objective reviews/opinions of the gel written by people who aren't selling it. Critical comments on BBSs seemed to be limited to customers' beardies not liking it.
FWIW, I didn't find anything on the Beaded Dragon forum, which really surprised me.

Thatcher, please change that avatar—it freaks me out, dude.

Wow! Amazon was amazingly super fast! Got the dragon gel today and Spike loves it! Guess he’s got a new salad dressing.

Done! She loves it!

Under the basking spot 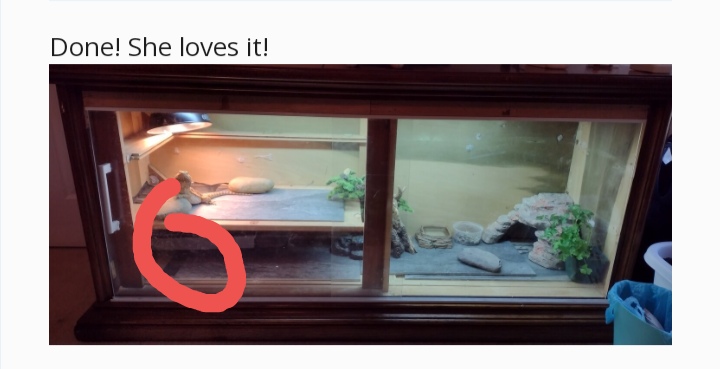 She pooped a lot lol(i saved it for the vet)! she's so much more active and I think she's a lot happier!

That is a massive poo!

MissSkittles said:
That is a massive poo!
Click to expand...

she seems back to her old self! She just got mad when I tried to use a harness for a picture and she pooped. Again.

i think shes trying to get me! what should i do?

Thatcher said:
i think shes trying to get me! what should i do?
Click to expand...

Pick her up and love her!

Thatcher said:
Under the basking spot
Click to expand...

That may be too shallow. Recommendations on the beardie forum range from 7"-12".
I thought from previous discussion that the top of the lay bin substrate would be at the same level as the shelf (which looks to be around 6-7 inches).

AmandaS, how deep is Opal's? Anyone else with a female?

I just wouldn't want Thatcher's little girl put off & egg-bound if she's not happy with the lay bin.

After the vet she said she was healthy! And I should just give her all of the stuff she needs and that I should add a little humid hide

Thatcher said:
After the vet she said she was healthy! And I should just give her all of the stuff she needs and that I should add a little humid hide
Click to expand...

Yes! Give her all she needs to make her a happy girl. I don’t know about a humid hide though. I haven’t heard about giving beardies one and adults don’t shed like leopard geckos. Spike sheds in body parts…a leg one month, tail another, etc. and it takes a long time for the shed to fully release. I give a bath when his shed is starting to look loose and gently use a soft baby’s toothbrush in the same direction his scales go. I don’t like bathing him more than 1-2 times a week, so I’m between if he looks like he needs it, I’ll give his shedding area a little spray with water.
You must log in or register to reply here.