I was alerted to a really neat newish LED the other day.

It would seem someone has finally provided an actual Full Spectrum LED. We have lots of lights, and even LEDs, that claim full spectrum, and as much as we wish that were true they have never really hit the mark.

Here is a good graph to illustrate, the why. 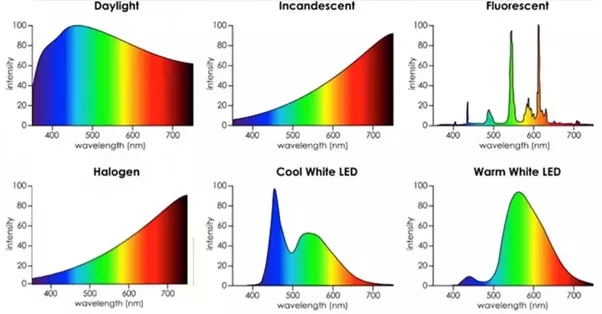 We can see here the glaring issue. Halogen, and Incans, very much provide red spectra, but lack blues. This is by the nature of the light source, and the way it works. This is why we only see them in warm colors (3k).

LEDs were a start, they were boosting our Blues, due to the way LEDs work, our reds were still pretty lacking however. So lets look at that, and why it happens.

This is how our Cool White LEDs work. They use a Blue Light Diode, and then using different colored Phosphors they alter the color. 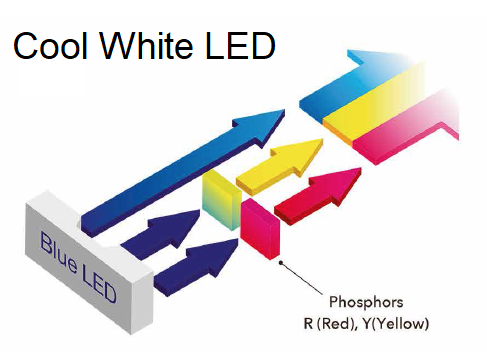 As you can see we are creating the Yellow and the Red, via Phospors. Its hard to turn red into blue, and trying to recreate green from yellow and blue, and still creating yellow also poses difficulty.

The end result of such a task is this.

The orange (Decor) is the Bridgelux LEDs I use. While we see the reds boosted, and the blues boosted, giving us a good CRI. We are still very lacking in the Green and Yellow spectras, with a Dive. Another area of issue is our Violets. This has been largely okay, as our plants are said not to use as much of that spectra, so it can be cut out. Doing so allowed us to push Lumens Per Watt, and have an acceptable plant growth. However its still far and away vastly different from sunlight.


Toshiba has sought to change this, with their Tri R LED. They felt there could be a market, and a real use for a Sunlike Spectrum (Pun intended, in a minute). The developed the Tri R LED, that works like this instead. 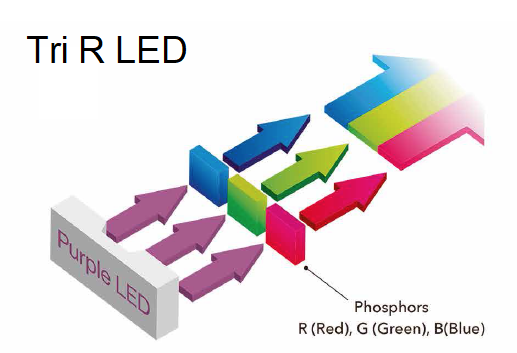 As you can see, design has changed. We have dropped the Blue Diode, for a 400nm version instead. Purple being a mixture of both blue and red, should provide both colors phosphor much better right? The idea makes sense, but DOES IT WORK. Yes, yes it does .


Now here is our whole picture, with the tech example and the spectrum's that are provided. 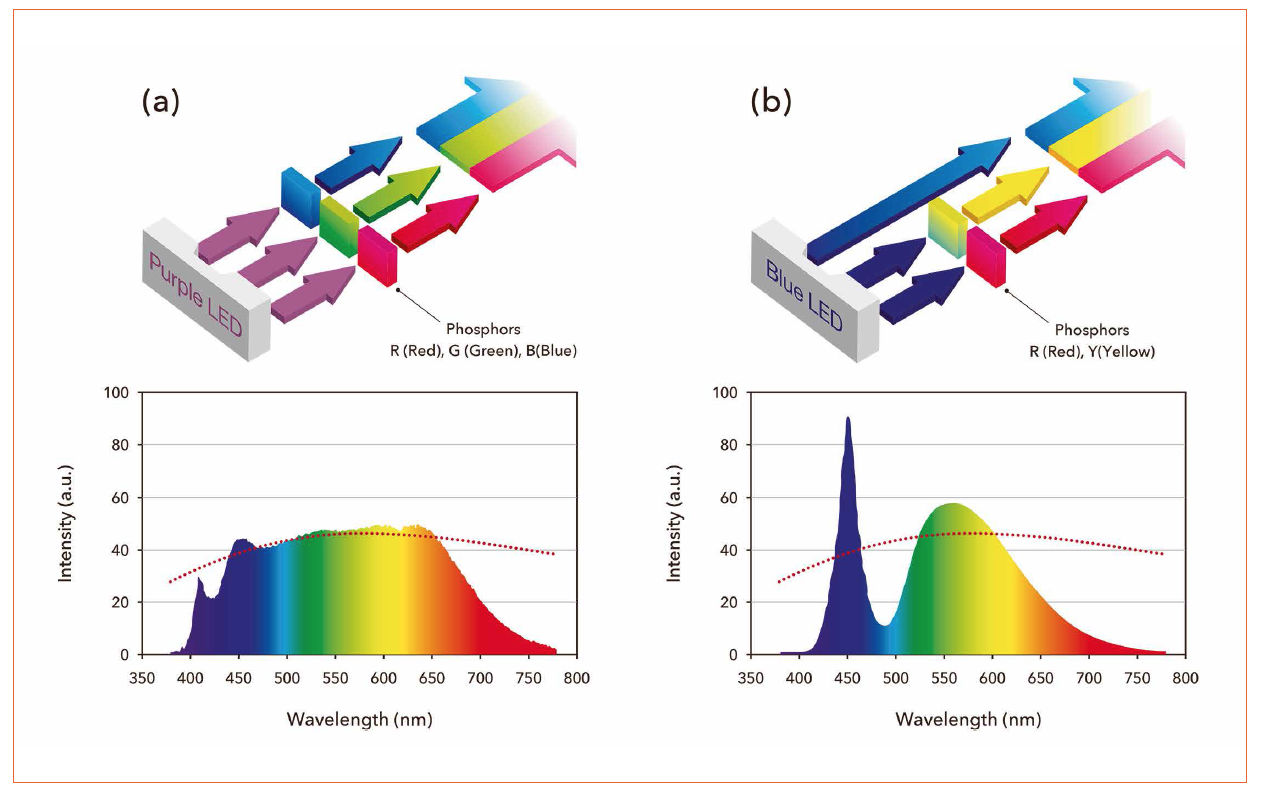 The red dotted lines are representative of actual Sunlight.


If we look back to the first graph, we have just got closer to sunlight then ever before. Its still not perfect, for our needs. We still need the IRA the LEDs lack, our herps can still see the UVA (down to 350nm) that is lacking, and we still need UVB.

However, if we were to mix this, with halogens and UVB bulbs we could somewhat bridge that gap, and be much much closer to natural sunlight.


I aim to replace all my COBs of current with these, and test and see the results. There not cheap, but I think they may show promise in our reptiles reaction to the light.

The Tri Rs depicted, can be found under the Name "Sunlike" COBs here, "Quantum Boards" here and Strips here (UK based, may ship to US)

My gripe with the Sunlikes as of today, is the low wattage. The highest we have available is 1455ma (weird max), I would like brighter cobs, which do exist (newest line) but are not yet on Digikey. If you would like to read more about the "Sunlikes" you can here. http://www.seoulsemicon.com/en/technology/Sunlike/

So in efforts to find me a brighter higher wattage COB. I found these, they claim bridgelux leds, so not sure how they are pulling this off. However, it does seem to work. They cost a little more though, but here are LCFocus FS5s.

I think as the LEDs makers, are telling us with this advent. The Time is come, that we push to better recreating the sun for our Herps.
Last edited: Feb 11, 2020

Uhhhh, so how much to make a thing that replaces a 75 watt halogen? Your diy stuff is at or above my pay grade when it comes to matching power supplies, drivers, led cooling, and having it all work
view our sponsors

nightanole said:
Uhhhh, so how much to make a thing that replaces a 75 watt halogen? Your diy stuff is at or above my pay grade when it comes to matching power supplies, drivers, led cooling, and having it all work
Click to expand...

Well depends what you mean by replaces the halogen.

Replaces the light, or replaces the heat? You cant replace the heat, so in this instance you would still want the halogen for the heat.

a 75w halogen only gives about 1100 lumens so most of those cobs, would replace the light and then some.

Are the new "Cool Thing" the price for the board is awfully high, I would rather find another seller, or DIY boards. They are not made by the seller, but by US solid state.

If you wanted a power supply for each one, you could run a wall wart likely, 24v .625 amps.

I want to try to find a cheaper source of the boards though, thats a high price for such a small board.

These are a better value, in a DIY friendly format, https://www.us.lumistrips.com/lumistrips-plug-play-led-us/linearz-sunlike-tri-r-led-modules-cri97-zhaga-2700-lm-m-us.html

Strips, their voltage is higher though. They need a constant current driver, and a Small one! I really wish at that requirement they would have provided a ldd driver on board or at least a slot for one .

I would really only feel safe running these with LDDs. So each strip will need one of these ran in line, https://www.rapidled.com/mean-well-ldd-350h-dimmable-driver/

From there, any 43+ volt power supply would work, as long as it has an amperage higher than 350ma x as many boards as you want to run.

If you wanted to run a bunch of the strips, you can get LDD boards like this, https://www.rapidled.com/ldd-h-4-driver-board/ which will socket in 4 LDDs at a time, and make it a solder less connection all around.

Even with the added cost of the LDD driver, for these strips. They are about half the price as the 6x6 board. They are 20mm x 520mm (22 inches I think they said) so good size for cham cages. No heat sink required for either one. If you wanted to, you could maybe fit them in the LED tracks, on Amazon that would give diffusion. I believe there was one that held 20mm strips. Not needed though, they are rigid as is. These might be the diodes, or even the same strips in Arcadia's new lights, IDK and the fact they dont provide a spectrum doesn't tell us, and even if they are, its cheaper this way.
Last edited: Feb 11, 2020

Oh and here is the flashy marketing video for them lol.