So I am opening this thread to discuss ideas for Yoshi the Jackson Chameleon’s enclosure area. I want to build something awesome, where he has LOTS of room and different areas to go. So this area in my “office” is where it is going to go. As you can see, the area is perfect for a wedge of plexiglass from the banister to the ceiling at a shallow angle.

Then I was thinking for the bulk of the enclosure I would build a frame from floor to ceiling there where the filing cabinet resides to the area where the desk is, for a 42x38x96, of which the top 12 would be utility, for lights pumps droppers etc and the bottom 12 would be for drainage and free of any obstacles for cleaning purposes, so that’s 72 livable. I might change that to 60 to give me 2 feet above for utility, but that just sounds like so much to me for lights. What do you guys think?

So next, I wanted to install a ramp that would lead to a small outdoor cage attached securely to the window frame. Double mesh to prevent birds and the like, hammock to catch him if he falls so he doesn’t hit the mesh, plenty of leafy cover and branches and the “ramp” would be enclosed with a sliding plexiglass or mesh door or something to prevent access when conditions aren’t right. That’s just one plan. You guys have the pictures of the working space (and yes I am willing to reconfigure my desk but it can’t be relocated due to I literally just don’t have another room to put it in (5 kids, 2 dogs, my wife, Yoshi the chameleon and apparently my wife now wants a Ball Python [but that’s another story] ).

So please, create a masterpiece and tell me your vision for the space. My only request is that it includes something extraordinary. Something that really makes this enclosure unique.

Also, I need suggestions with the lighting. One tube? 4? In the ceiling? Hanging?

And finally, I am open to criticism. If you think “I don’t know why he’s building an over hang on the stairs cause if he’s not going to have lights and misters there Yoshi won’t go or won’t be healthy in there” or “That main enclosure is just overkill, you’ll have problems cooling it” say that, please. I’d hate to build something and have an issue you foresaw.

P.S. I just realized, I will be installing a window unit AC there for night time temp drops, so I may be forced to find another space for my PC after all… So design away!!!! Yayyyyy!

@CasqueAbove free ranges out of that group, along with @jannb, and myself. No others that I can think of currently. My Parsons(a montane species, though different from jacksoni) lives in our office. I have kept him like this for a couple years(but he lives outside in the summer). He's stayed well hydrated simply by fogging at night, and I put my guy in the shower once a week for 1-2hrs. A bit unconventional, but he's been doing very well this way. Honestly, if I could I'd like to add misters, but not a possibility where my guy is at. So you could probably do something like that with misters. The problem with large free ranges is getting the uvb/fog or water/basking right. If your cham sleeps in the same spot, fog isn't too difficult, but I'd recommend a dehumidifier to make sure the room doesn't get too humid or you'll have problems. Basking isn't as big a deal for montane species either. Uvb can be a pain, but supplementing d3 a little more, or outside time should be plenty to make up for it. I'd probably use t5ho for uvb, but one of the 2in 1 basking/uvb bulbs may be good too in the case of free ranging. For outside screening, I'd use coated hardware cloth. Safest option.

Overall, I think free ranges are great, they allow a lot of ventilation. My chams always did well with them, and with the night fogging, it gives a nice balance of dryer days and humid nights.

Maybe this will give you some inspiration https://www.chameleonforums.com/blogs/free-range-inspiration.2464/

Sonny13 said:
Maybe this will give you some inspiration https://www.chameleonforums.com/blogs/free-range-inspiration.2464/
Click to expand...

That's funny because it was actually this thread which initially had me planning a free-range area for him.

I can give more follow up when I get some time. But don't plant what you want. start taking temperature and humidity readings. Figure out where your best location is and build from there. Size is a little tricky, especially with a Jacksons that needs the cooler night temps and humidity. But it can be done. Start with his sleeping / hydrating area. Where as completely open is harder to control I have found that an are that has 3 sides can really in humidity better than you might think. Let the climate and needs of the chameleon guide you.

This is how I had it done on the cheap. To the left of the photo you will see the sleep/hydration area, There is also a solorGlow heat/UVB bulb in that area so UVB through out with lots of temperature range. The sleep/hydration area is just painters plastic tarp to catch water. The bottom is a drain pan for a washing machine. There are auto misters and fog. The second photo is how I have it now. 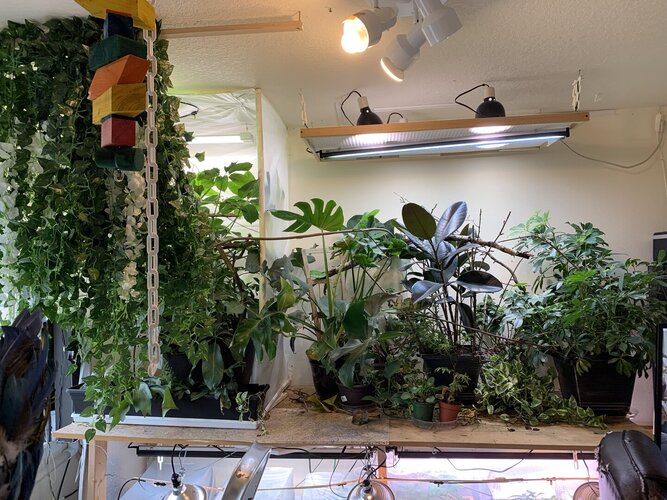 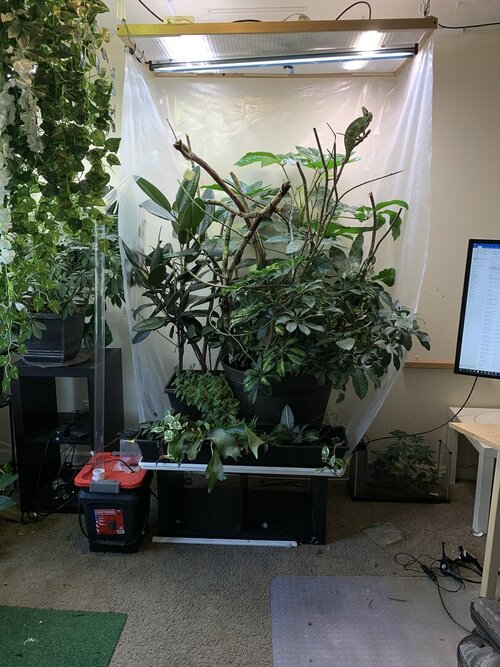 Sonny13 said:
Maybe this will give you some inspiration https://www.chameleonforums.com/blogs/free-range-inspiration.2464/
Click to expand...

Psychomunky said:
That's funny because it was actually this thread which initially had me planning a free-range area for him.
Click to expand...

That gives me a big smile

Nahhh I was just trying to think of people that full time free range.

jamest0o0 said:
Nahhh I was just trying to think of people that full time free range.
Click to expand...

Then you can count me in. If I can figure something out for my K. Boehmei, that’s safe, he’ll be full time free ranging next

Ok, so I've been gone a little, but I'm back to work on this. It's getting close to build time, and I will share my rough draft plans with you guys either later tonight or tomorrow, so please, keep the awesome inspiration coming. If you come across any photos of something cool that I should incorporate, please share!

So I put a little time into the first sketch, and here's what I've got so far. It isn't free range, this enclosure, my wife decided to become a ball python mommy so I decided to enclose Yoshi. Just in case 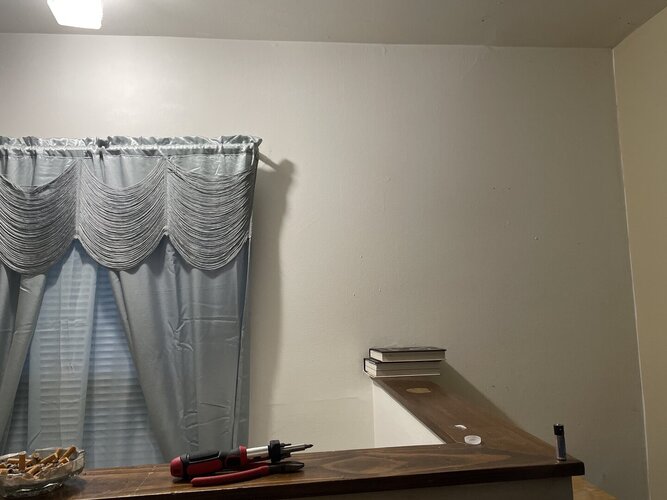 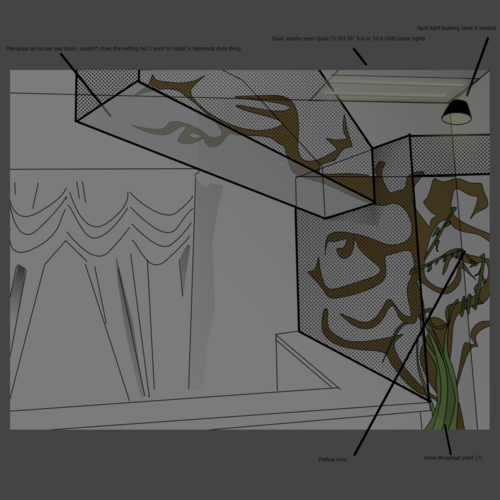 I'm not finished with this sketch. I plan on adding more foliage, the Shooting Gallery feeder, and showing the drip system.
Last edited: Jun 9, 2021

I'm not finished with this sketch. I plan on adding more foliage, the Shooting Gallery feeder, and showing the drip system.
Click to expand...

Already love this design phase, I think free range or not, it’s a large enclosure which is thought through and that will always be a big plus.

Just one thing to think about, it could be he/she choices the branches from the roof part is he/hers favorite poop branch. You need think about how to easily clean it.

This was my design phase for my free range setup, maybe you find something useful between it

Psychomunky said:
So I put a little time into the first sketch, and here's what I've got so far. It isn't free range, this enclosure, my wife decided to become a ball python mommy so I decided to enclose Yoshi. Just in case
Click to expand...


Psychomunky said:
I'm not finished with this sketch. I plan on adding more foliage, the Shooting Gallery feeder, and showing the drip system.
Click to expand...

I have the same question as Sonny13; how are going to clean that bridge/tunnel section?
Also, no-one's mentioned it yet, but many frown on hammocks as a hazard to chameleon claws being caught & ripped off out of panic. Chameleons need all their claws for climbing defense, hunting/eating, etc.

A little practical advice from personal experience: Unless you're planning a walk-in enclosure, anything deeper than 24" (front to back) is going to be very difficult to clean and work in. I've heard of people stretching that to 30" (on top of a standard 30"W folding table) but you'd need arms longer than mine to reasonably reach.

I have been thinking about this...

42" x 38" could be done, but it would be expensive. By making the floor a shower base (apparently they make 42 x 38 shower bases) you could make it a step-up/walk-in with space underneath for drainage, mister pump, and storage, yet it could still support your weight to get in there to clean & work. To accommodate a 5 gal. standard drainage bucket (12") underneath, you'll need to go a little higher (depending on the height of the shower base)—maybe 16"-20". This would require two steps (for safety) with the shower-floor being the third step.

Other ideas are still percolating. I think "awesome" is definitely possible, while still being practical.

Ok so I took some of the things you guys said about ease of cleaning into account, and made some slight changes. I am still coming up with other designs in my head. 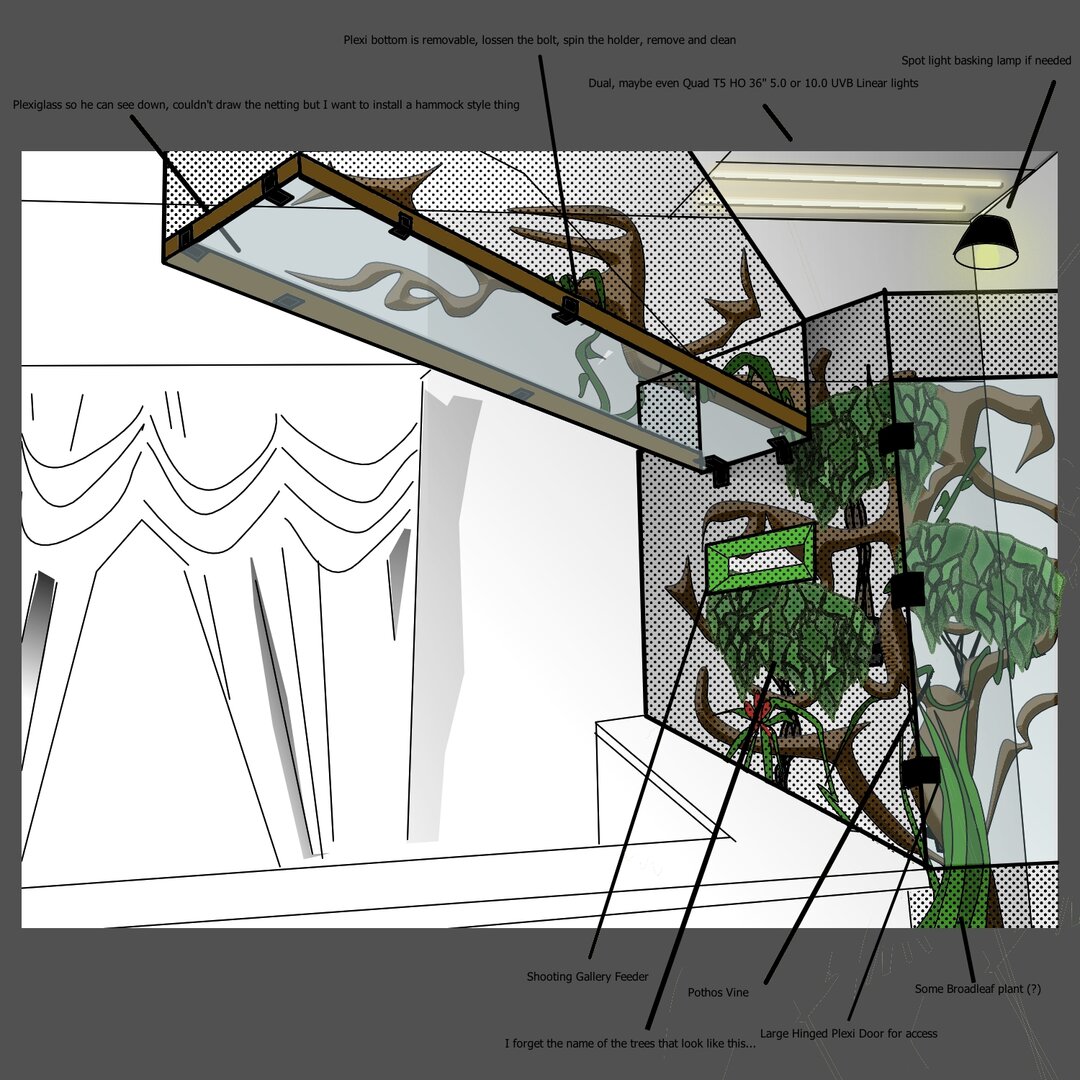 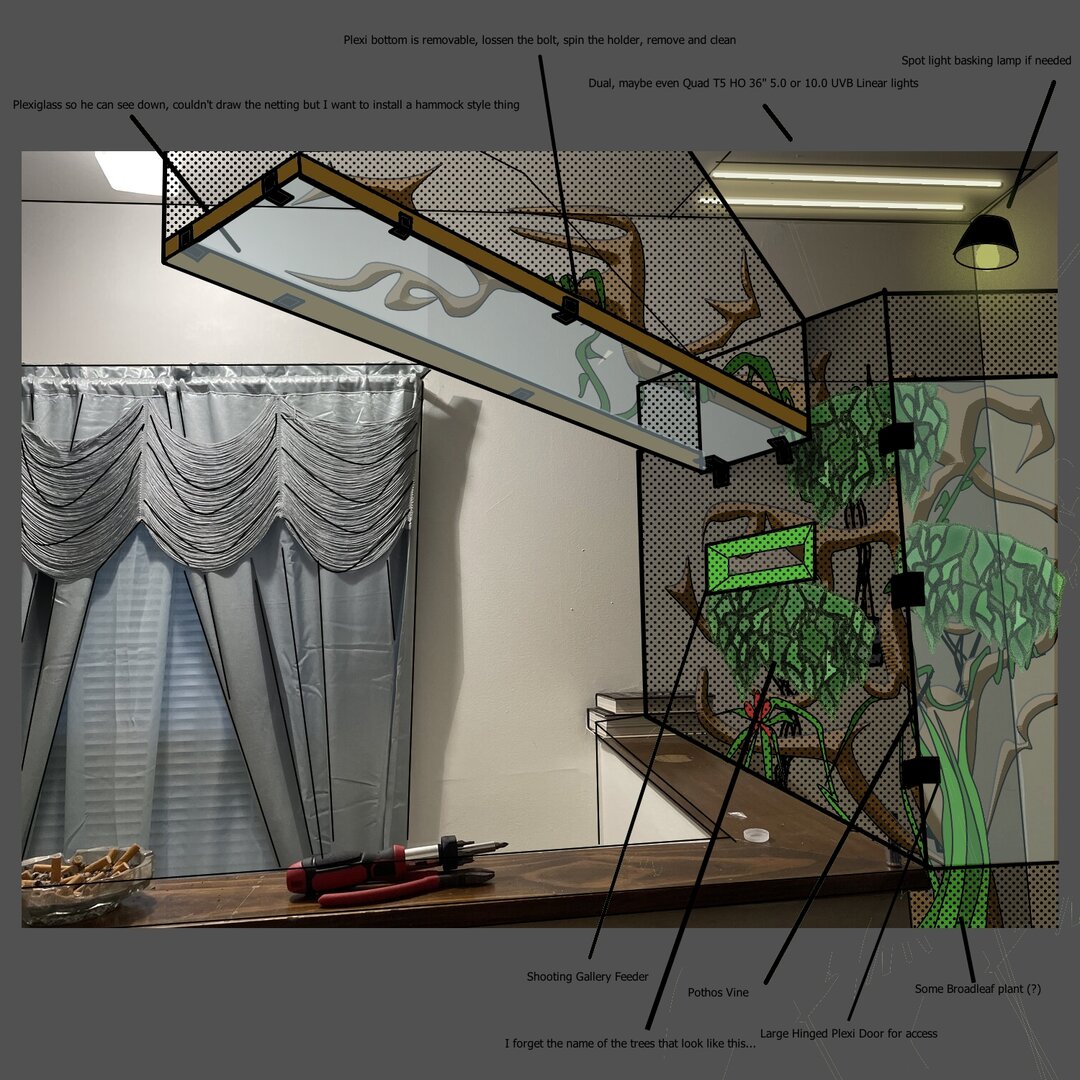 You don't need more than one UVB bulb; multiples will not increase the range—only the power.

I'm also not sold on the whole tunnel/bridge idea. If that area is provided with sufficient foliage, the chameleon will most likely be in the middle or top of that foliage, and probably not visible from below.

Depending on your local climate, you might also want to consider building this as a hybrid enclosure rather than mostly screen. Hybrid enclosures (much of what you have as screen would become plexi or glass*) are much easier to control microclimate in.

I’m going to draw out a new one today, if I get time. I’m SUPPOSED to be writing and threading an A* system into this top-down game today, but planning his enclosure just seems so much more appealing. This could be bad guys.

I usually find getting busy with another task allows my brain to be distracted and work on a project like an enclosure subconsciously. This usually results in better ideas and things I hadn't thought of.

But not everyone works that way.
You must log in or register to reply here.

help with homemade enclosure in a pinch
2