Why does he want to walk in the floor???

Okay, so I have had my jacksons chameleon now for a month. I was told by the man I bought him from that he is "a little under a year old", he is eating and drinking well, and is very active. My original problem was I was housing him in a large exo terra terrarium, which I was told was ok. I have heard conflicting views on whether or not that is true, but I decided I wanted to let him free roam my living room.

I will try to get a picture up but currently he has a 6 1/2 foot fake tree, an umbrella plant, plus a jungle vine leading from his tree to the curtain rod because he loves to climb and chill out on the curtains (which are made of bamboo). He has a big dripper over the umbrella plant, plus a UV light shining on his tree. My digital thermohydrometer says his tree area is 76 degrees with 67% humidity. He eats around 5 large crickets a day (he won't ever eat more than two small crickets or one large cricket at a time, and he refuses to eat crickets out of a cup.

My problem is this - he keeps climbing down onto the floor, which is okay but it bothers me, is there something wrong with him? He roams around down there on a schedule, I know because I go to work about 6:30am when the sun is coming up and swing back by to check on my critters when I am en route to college around 11am. First he climbs from his tree (which he sleeps on throughout the whole night) to the curtains, chills there for awhile, then at some point climbs down the curtains and onto the couch, from there to the floor where he then wanders around until I come home and find him, usually chilling on some object in the room. I usually pick him up and put him back on his tree and when I come back that afternoon/evening he is either on the curtains or tree.

I usually work weekends but I am home today and it is 12pm and he is still just wandering around in the floor climbing up and down on things. He seems happy, no stressed colors, and is eating and drinking. But why doesn't he want to climb on the curtains and trees??? Thanks!!!

The knee jerk reaction is to say that there is something off in his environment that he is missing and trying to find himself in the rest of the room. Maybe I missed something, but everything seems pretty ok for a Jackson's. Maybe raise the basking temps just a little, so it's closer to 80? Perhaps he's looking for something a little warmer? Just a guess.

I had all my chameleons in free ranges and all of them usually stayed on there (unless they saw a stray cricket crossing the room or something like that) but one had a routine set in stone that he woud do every single day. He'd come out of his free range room, stroll right infront of the couches, and then spend a couple hours climbing on and around the tv/tv table. And then when he was satisfied he would walk back to his room for the evening. I think he added the tv table to his territory and was simply patrolling it each day, like any male might do in the wild with a piece of territory. Perhaps this is what your guy is doing?
B

Yes maybe he is patrolling, I just picked him up and put him in his basking spot. He sat content for about 5 minutes then down the tree he goes. He is back marching across the living room again, I don't mind if wants to I just worry something is up but like I said he seems pretty cool about it. One day I actually found him at the back of the house in my spare room chilling on those blinds! I guess I didn't think he would need the WHOLE house to free roam lol. I am planning to buy a piece of plastic so I can put in the doorway to the hall so at least he doesn't wander the entire house while I am not home.

This is a problem some have with free ranging their chams. The desire to roam. Jannb would be a great person to talk to about this. I've had success free ranging with an older, less active cham. The theory is that if they have everything they need, the desire to roam would be decreased.
B

I guess my problem is I don't know what else he needs. That was why I realized something was wrong with him in his terrarium, he wouldn't climb his trees or vines, he would just sit by the door and wait for me to let him out where he was happy to sit on the curtains. Now that he is out 24/7 he isn't happy with the curtains and trees :/
E

Sounds like he is happy to me. Probably just wants to check out the rest of his area.

First let me say I don't free range my chams. I did have one male veiled who free ranged most of the day, and nights when I forgot to put him away. He roamed all over the room and off into my bedroom when I left the door open. I was told a male veiled would never stay in one place. After a while he did stay pretty much high up in the chameleon room, but I didn't ever trust him and was careful after he went to my bedroom about 40 ft away. I don't know if this helps but it is all I have to offer.

Roaming is only really a problem if he can get into somewhere dangerous and hurt himself. I let mine roam wherever they wanted because the apartment is small and it's all cham-proof. You can always make a little plastic fence around the tree and limit his range though.

If you want you can post a pic of your FR and we can see if we can brainstorm ideas for what could be done to keep him more interested in it?

my female panther gets put in her cage at night every morning she meets me at the doors for breakfast. then she reaches out for me. so I put my hand in front of her she climbs on and we go for a roam around the house. then I place her on her rope and she roams them for a while. then she will dangle thats when I know she wants down. so I put my hand out for her. she claims on and we watch tv then she climbs down off the couch and wonders a little bit. then she wants back in her cage. and watches tv drinks eats lunch and naps. all that roaming makes her tired. then around 4 she wants out again so we go out side she gets her sunning in and wonders around on the grass climbs my nectarine tree basks some more. and then climbs back on me. i bring her in and she plays monkey on her rope. then back to her cage eats dinner and bed. this happens almost every day. for her it's normal. good thing i am autistic no specified. so it works out good very ritualistic. its her routine. hope this helps. by the way yes she's already laid eggs in her plants. we removed them! so i know she's not egg bound.

As long as the room is "chameleon proofed" and he goes back to get enough heat and UVB he will be fine., My Jackson's was free ranged and would explore my entire room everyday, nearly on schedule like yours.
B

Okay so here are pictures of his tree area and window. His umbrella plant and dripper are on a table behind the tree. 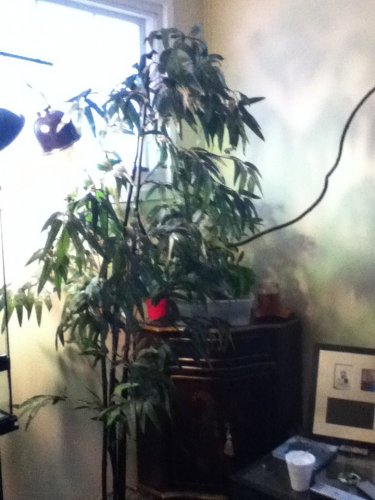 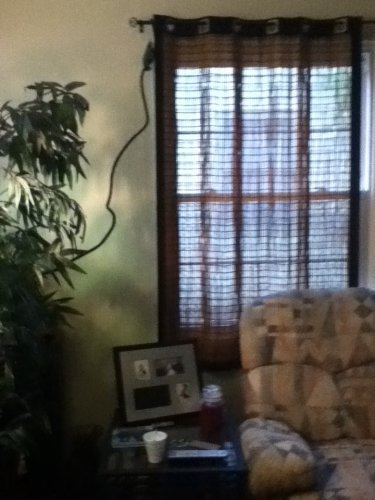 Here are two pictures of him just now, finally content to sit on his vine. 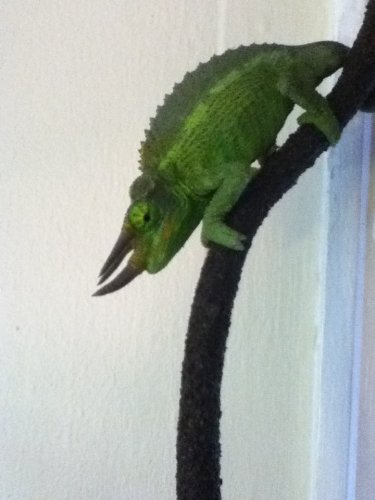 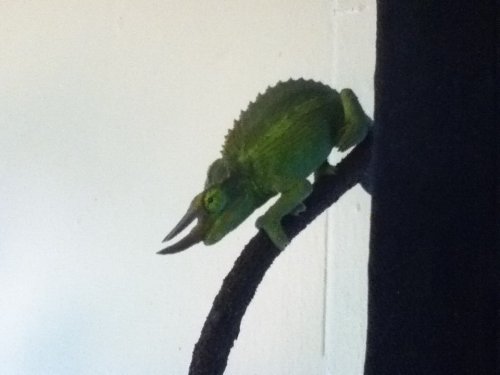 the most roaming my chams do is to the screen on the window..then back to the basking area..ive only had one cham in my 13 years of free rangers that would "patrol" his area and come chill on a arm rest at the end of the couch ..but i also beleived that it was because he was looking for attention..my female panther that has been free ranged since 3 months old, will run to the front of her tree as soon as she sees me weather i am offering a treat or not..and she will on her own walk onto me..i think its normally a male thing..but it would make sense that they are on patrol ...one question...does he ever "taste" as he roams..he may be marking his territorry and widening his area in search of a mate.....
B

Nope Ive never seen him taste, but that doesn't mean he doesn't do it. I am not usually here during the day, but I have yet to see him do that this afternoon.

its almost like you need one of those house cam systems so you could watch him on yer computer while at work to see what hes up to..lol
B

I know! I told my mom I am going to buy a nanny cam for him My mom told me to put a cam on him and have chameleon vision lol Who knows what sorts of things he is up to. Right now he has given up the floor wandering and is relaxing at the top of his curtain. I think he may be done for the day.

Becca said:
I know! I told my mom I am going to buy a nanny cam for him My mom told me to put a cam on him and have chameleon vision lol Who knows what sorts of things he is up to. Right now he has given up the floor wandering and is relaxing at the top of his curtain. I think he may be done for the day.
Click to expand...

I noticed most of mine's exploration would be done during the day...

you should patent that know..that would be soo cool to see "chameleons eye view" lol
B

Hey guys, so I figured I would post an update - Rango is still roaming around, still on a schedule from about 9am - 3:30pm but he is now coming back to his tree when done. Hooray! Also in a thread I started concerning him being afraid of waxworms - he got over it and now that the weather has warmed up he is eating like a pig.

He is such a stinker, totally has me trained but I love the little guy, thanks for all the advice that got me through the first rough weeks


-Becca
You must log in or register to reply here.

L
Beautiful day in Maine and taking Eustis outside!

L
When the sun goes down Eustis goes to bed