Who here has Leopard Geckos!?

Well this week I got a Female Leopard Gecko from a friend of mine that had a baby and she needed christmas money so i saved her from going to the petshop. I think it would be fun to post pics and tell the story of how you got into geckos and the story behind your little leopard gecko!

so heres my story:

Well the other night I got an email from my friend on facebook that didn't think they could take care of their female leopard gecko that they rescued just about a year ago. The gecko had a horrible and rough start to her life, she was in a self made 20 gallon tank that was two ten gallons that had the side cut out and glued together. The substrate was cat litter and had nails and screws on the bottom, she had nothing to hide in and was barely breathing when rescued. My friend who rescued her had two tickets to some major concert with multiple bands (sorry i forgot the name of the concert lol) and traded them to rescue the gecko. She hand fed her crickets, and meal worms, and gave her water with an eye dropper. Slowly over time she gained weight and has been healthy ever since! Amazingly there are no signs of MBD, and is a very active Leopard Gecko. She is a bit slow, and she doesn't really eat live food, she prefers the dead crickets but will eat the meal worms. I am teaching her right now how to eat the live insects that way she gets the best nutrition *NOTE* these crickets where frozen and then slightly thawed so they didn't lost full nutrition. She had some sand like substrate and a heat rock in the setup. Far better than the cat litter and the screw and nails. Since I have gotten this beautiful Leopard Gecko she has already started to eat live crickets and now has calcium in a dish. she has a sanitary water dish, paper towels on the bottom of the cage, a moist hide which she never had and a coconut hide also along with a heat mat instead of the heat rock that was in the enclosure before. That is her story so here is what she looks like! So please join in and hope you enjoy this thread!
Zac

also in these photos this is before I took out the sand and heat rock. the first picture is one that was sent to my cell phone, the second was off of my camera also on my Facebook.

I've kept leos for over 18 years. I lost my original female a few months ago...she was with me for over 17 years! Her mate and another female (a year younger than the one I lost) are still doing well. They are fun to watch...gave me hours of pleasure!
Last edited: Dec 26, 2010

Awesome! I just took her out to handle for a while. She loves to be out of her enclosure and in my hand! She kind of grumbles when she goes back into her cage. lol. She's still wondering why her home was remodeled lol.
K

Sheba (the one that died) was very friendly and always liked to come out on my hand. Freckles (the other female) and Solomon (the male) were a little less friendly.

Sheba also never produced fertile eggs even though she mated. Her background color was odd too...I thing she is what I call a high-temp. female....likely has more male hormones than female?

Rex (sexy gecksy Rexy) was my nephew's; nephew got bored and grandma dutifully took care of him, but had never really wanted a leopard gecko all her own, so I offered to take him. I was in Michigan, Rex was in Minnesota, and my mother delivered him to me when we visited mom's cabin in Wisconsin. I don't think he was supplemented in his earlier life; he's not a terrible case of MBD, but has one slightly bad leg and doesn't have a very vigorous bite. He does best with crickets if I hold them by a hind leg for him; by the second or third bite, he's got it. He loves waxies as a treat and I'll give him other soft-bodied worms when I've got them (butter worms, hornworms); don't really trust him with mealies, or vice versa.
We've had him since 2004 now, and he moved with us to Nebraska this past summer. He loves to hide in his log, usually with just about everything but the head sticking out.

Looks awesome Hallenhe! I seen you are in Lincoln Nebraska, not to far away from South Dakota right? and I have family throughout Minnesota and Wisconsin, my family has a cabin in Wausau, but they live more in Hudson and your leopard looks awesome! Mine loves to be handeled and hates to be back in her enclosure lol

i have had both my leos for about 10 years....there still very healthy. Its a good thing they are hardy animals. They pretty much can live through any hardship and the leo is looking pretty healthy in those pics right there

fbiband said:
i have had both my leos for about 10 years....there still very healthy. Its a good thing they are hardy animals. They pretty much can live through any hardship and the leo is looking pretty healthy in those pics right there
Click to expand...

Thank You very much! She is very fun to watch

ChameleonRave said:
Looks awesome Hallenhe! I seen you are in Lincoln Nebraska, not to far away from South Dakota right? and I have family throughout Minnesota and Wisconsin, my family has a cabin in Wausau, but they live more in Hudson and your leopard looks awesome! Mine loves to be handeled and hates to be back in her enclosure lol
Click to expand...

Thanks! We're not right next door, but pretty close (looks like a little over 5 hours between Watertown and Lincoln). If you ever want a reptile show and don't mind a bit of a drive, there's a good one in Omaha twice a year - April and October.

hallenhe said:
Thanks! We're not right next door, but pretty close (looks like a little over 5 hours between Watertown and Lincoln). If you ever want a reptile show and don't mind a bit of a drive, there's a good one in Omaha twice a year - April and October.
Click to expand...

I will try and get down in April to the reptile show! i tried to go this October but I never got to it. its either Omaha or Minneapolis but I never hear about the Minneapolis ones ever! lol I'm always on the hunt for some new turtles, chameleons, geckos, etc. and the supplies! do you know the date when they have one? ha

These are our pair of Leopard Geckos...not much of a story on why we got them, other than my older son reading about them on the school library... 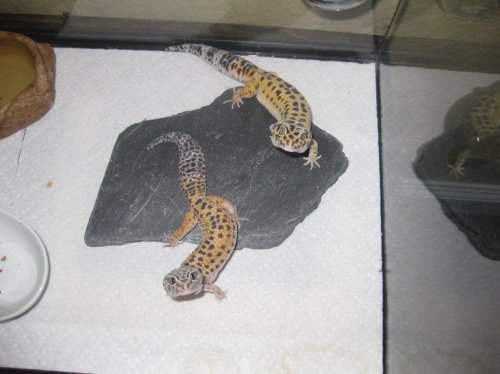 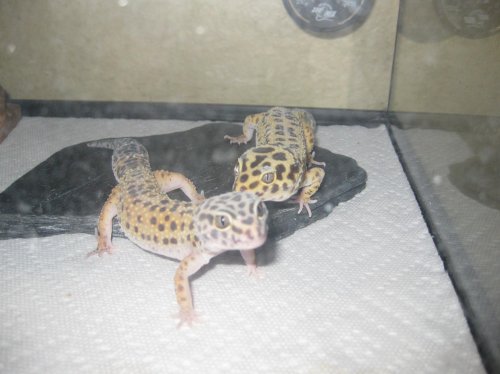 Awesome Eltortu! How old are they and what are their names?

They are about year and a half by now. They don't have an official name but I call them Gecko and Gecka... I now very original...

awesome! they look awesome! i would like to get a male for my female so shes not so lonely but not for a while lol
Z

Hi, my dad just bought me a baby 2 month old baby albino leopard gecko tonight. I just set up his/her home and set up the infra red light. I need to find out what sex it is but I guess I'll have to wait til he/she gets alittle bigger before I can figure out what to name him/her. Just thought I'd share that with you guys, just trying to get to know people on the forum since I am so new. He's/she's so cute and will be a nice new addition to my family.
K

How about a picture??

Awesome Zachariah! and I agree with Kinyonga pics
Zac

will have some babies soon!!

1y/o female panther, new addition to my reptile family: Could use some pointers!