Hello all. I've had Specs, my ambilobe panther for about a year and a half (and he is about that old, take two to three months.) He has been having regular sheds throughout his life until maybe 3 to 4 months ago. It seems like he is stuck in the shedding process. There is flaking skin on his spine, head, and in other various areas on his body. I was told not to pick at it and try taking it off myself, and to just wait for him to shed, but its never happened and he always stays the same. I tried letting him soak in some water, he just dries off later and nothing really comes loose. It gives him almost a powdery look on his face. I have tried lightly scratching his spine, and some of it just flakes off a little, but then there is an obvious line on his sides where the shedded skin just ends and is too tight to come off. What could this be and how did it happen? Is there a way to help him get rid of it?

Here are some pictures of the areas. 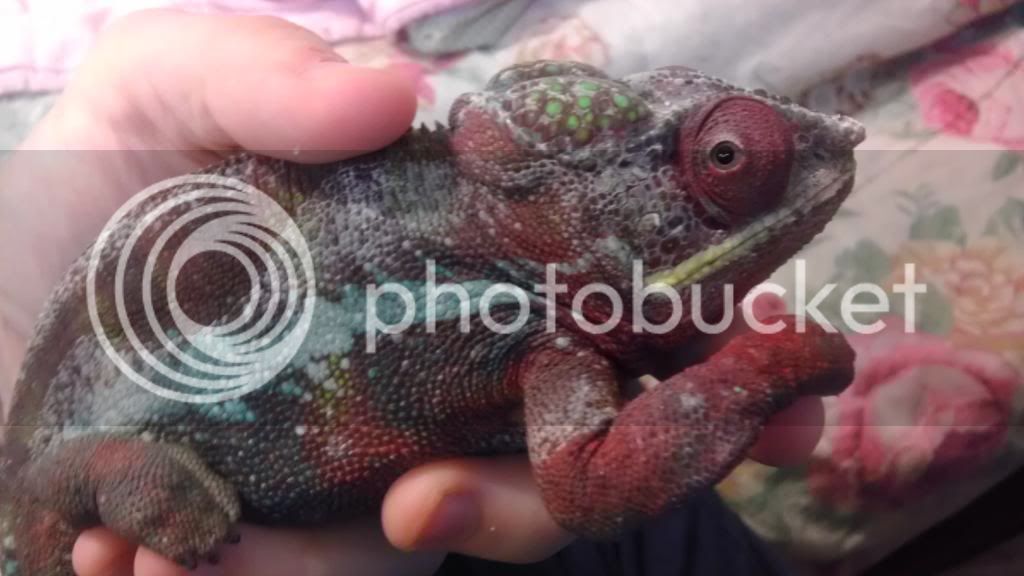 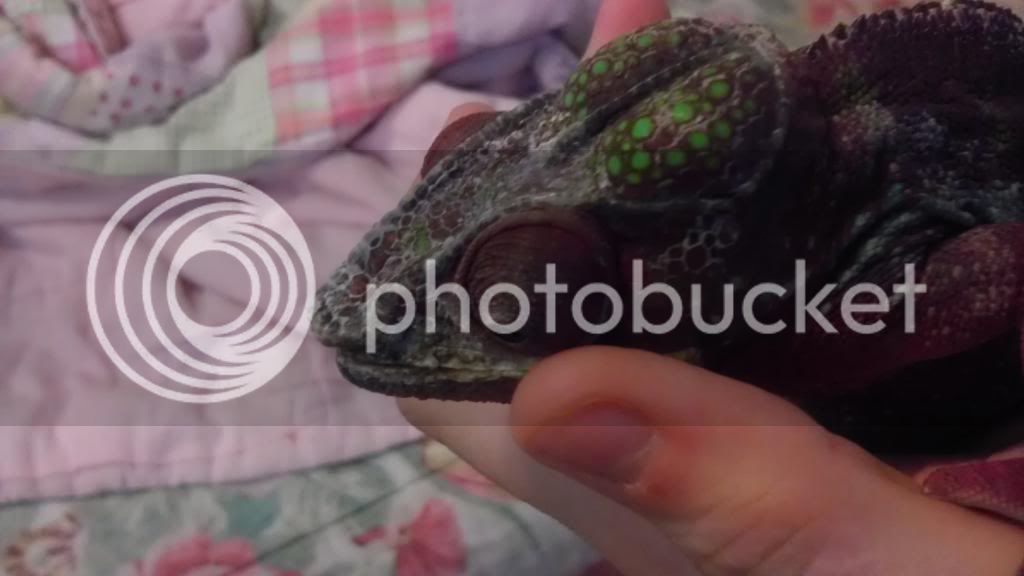 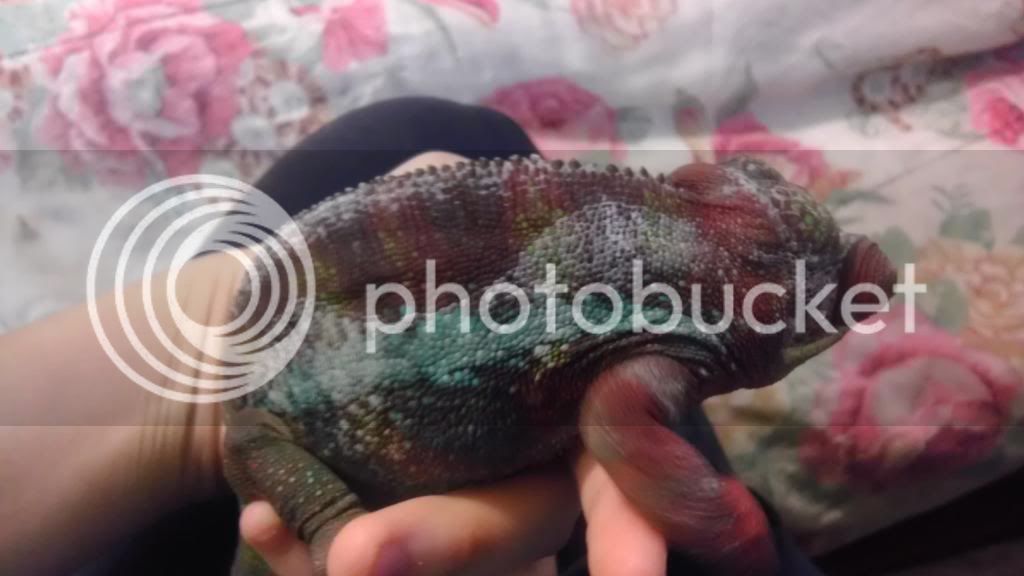 My veiled had this for a while.

Just mist a lot and eventually it will come off.

Whatever you do, DO NOT try and pick it off yourself.

I have never had that issue but what are you feeding him! His fat pads look huge!

I almost forgot to do this!

Chameleon Info:
Your Chameleon - Ambilobe Panther, male, 1.3 years old, had him for around 1 year and a month
Handling - Not too often. Only if I see him on the bottom of his cage or to soak him for his skin.
Feeding -Staple crickets. I've put him on a diet of around 5 or 6 a day since he seems to be overweight. I feed him once early in the morning. Crickets are dusted with an all in one and gutloaded with bug burger.
Supplements - Repashy Calcium Plus, dust every morning feeding
Watering - I hand mist throughout the day and I spray until the bottle is empty. I sometimes leave a bowl on the bottom with a vine leading down for him to get to it. The bowl gets changed daily and I see him drink from both sources, but he seems to favor the bowl (which is why I have it)
Fecal Description - Seems normal, occasionally some orange mixed in the white part but it goes away the more he drinks. I do notice however that he doesnt go very often at all (unless im just not seeing it) but I really only notice maybe once a week... he has not been tested for parasites although I had planned on doing it soon.
History - It should be noted that Specs does not eat by himself anymore, and yes he has seen a vet. He had gotten mild MBD when he was young (the UVB light I had had a plastic cover slip on it which the UV rays didnt pass through... stupid company and stupid me for not noticing it) and he was taken to a vet for that and it was treated. Luckily it was caught before it got bad. Ever since however, he has still been fairly lethargic, and he never goes after crickets himself anymore. I have been force feeding (without any problems really, he swallows them and all) for quite a while now. The vet said to just keep trying to offer crickets but it hasn't been working, he just ignores him. I have tried feeding him other things as well with no success, he is just completely uninterested.

Cage Info: Cage Type - Mesh (reptibreeze or DIY?) cage. Standing approx 3 1/2 H x 1.6 L x 1.6 W
Lighting - Zilla Slimline 5.0 UVB (should be noted that these lights all come with a plastic cover slip, I rip them right off off every time I get a new one), 75w basking lamp. Both sitting on top of his cage.
Temperature - Top of cage is in the 90-95 range. Bottom is probably my room temperature, which is generally in the 70s. I see him the most in the middle of his plant or near the bottom, sometimes near the top for some heat. I have a digital thermometer.
Humidity - I try to keep it in the 60%s when possible, sometimes 70. I mist multiple times a day and I go until the bottle is empty.
Plants - He has a schefflera tree. He also has fake ivy vines laced around it to help with water and holding humidity and some thicker bendable climbing vines.
Placement - Cage is in my bedroom. The traffic isnt too high though. I am in my room just sitting in my desk on the computer most of the time, so not much is going on. I am also at school for most of the day (mother takes care of any misting during that time) so he gets a lot of quiet time.
Location - Louisiana

The only thing I can recommend is maybe spraying a little more or giving him some showers to see if it helps. What kind of water do you use? Is it possible that it is the mineral deposits from the water? (Or at least, that's what the white reminds me of, but I've never heard of the mineral deposits ending up on the chameleon like that...)

Also, pooping once every week or so as an adult is fairly normal.

5-6 adult crickets a day is waaaay too much for him. He is very overweight and should be fed about 5-6 crickets every 2-3 days instead. If he were mine, I would even feed a little less to help get his weight down a bit (so his casque pads are only just slightly rounded and not bulging at all) since 5-6 every 2-3 days is usually what keepers feed just to maintain the weight as an adult. I would start weighing him to make sure he is loosing weight.

5-6 crickets every 2-3 days? Woah, I didn't know that would be okay! Alright, I'll definitely try that. I always thought that starving him for a day was a bad thing, and I felt horrible if I missed a day. I guess I was used to his baby/juvenile growing diet of around 12 a day. Im starting to wonder if overfeeding him could be the cause of him still being a little lethargic.
That being said, I'll definitely try him on this new diet.
It has been a while since I've given him a nice long shower, so I'll try that as well for some increased humidity. The problem is just getting him to stay on a branch or something to hold on to while in there, im worried about him falling and hurting himself.

I just use a plant and have the water bounce off the wall or use a 5 gallon pump mister filled with warm water (so that the water comes out lukewarm, and doesn't feel even just a little bit warm on my skin.)
You must log in or register to reply here.