we bought a juvenile veiled chameleon today, they had the tank labled as male and we specifically asked for one, but now that we got it home and had a chance to get a good look as i put it into its new home, im starting to second guess its sex.

From all the pictures ive seen even baby males have a visible 'spur' on their back feet, and i cant seem to tell forsure if its a spur or just the ankle itself. if anyone with more experience can shed some light it would be very helpfull, would like to know if we got charged extra to buy a female labeled as a male.

took 2 picutres, not the best but i didnt wana stress it out handling to much before it went into its cage. 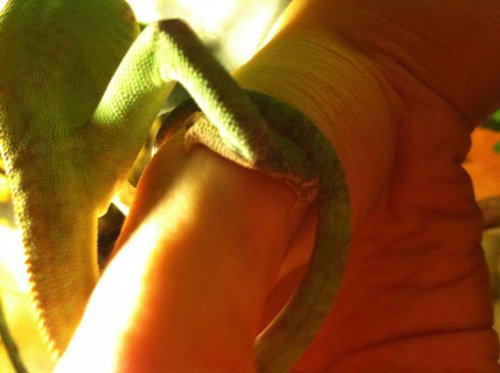 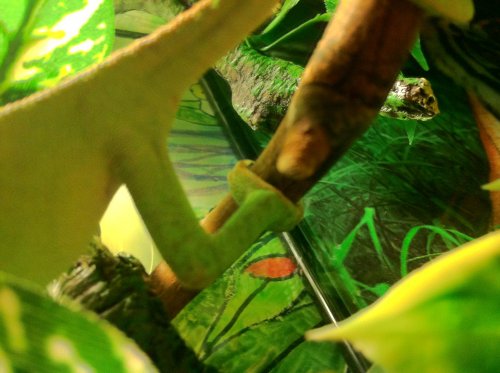 did you try searching the forum for pictures? i know there was a thread on how to identify them.
C

yea, as i mentioned ive looked at a bunch of pics, some males have very visable 'spurs' and some not so much.
Thats why im asking here since theres bound to be people with better experience in telling them apart from the pictures then i am.

i would guess a female...im not seeing a nub either, im no professional,just my guess..and you are correct at sexing the veiled chams,males will have a spur,even very young you should see a nub..

Female. I don't see any spurs.

Female. no spurs at all.

Yep, definitely a female. That's just the ankle bone you see. The spur is lower down. Not super noticeable all the time, but definitely recognizable.
C

Thanks alot for the info. Looks like we gota do some extra work and get this girl an egg laying box set up.

Would anyone be able to take a wild guess on her age? Her body is about 4-5 inches not including the tail, her tail looks to be close to the same length as her body so I'd say 8-10 inches at the most in total.

Welcome to the forums. If you post some more pictures of all of her we will be able to try to guess her age. I'm attaching my laying bin blog for you below and Dez's video on how to set up a laying bin. You should keep a laying bin in her enclosure at all times.
https://www.chameleonforums.com/blogs/jannb/345-egg-laying-laying-bin.html

Definitely a female.... With even baby veiled chams it would be quite obvious if there was a spur or not....
You must log in or register to reply here.