today i had pablo in the bathroom on his new plant and he caught a glimpse of himself in the mirror for the first time. 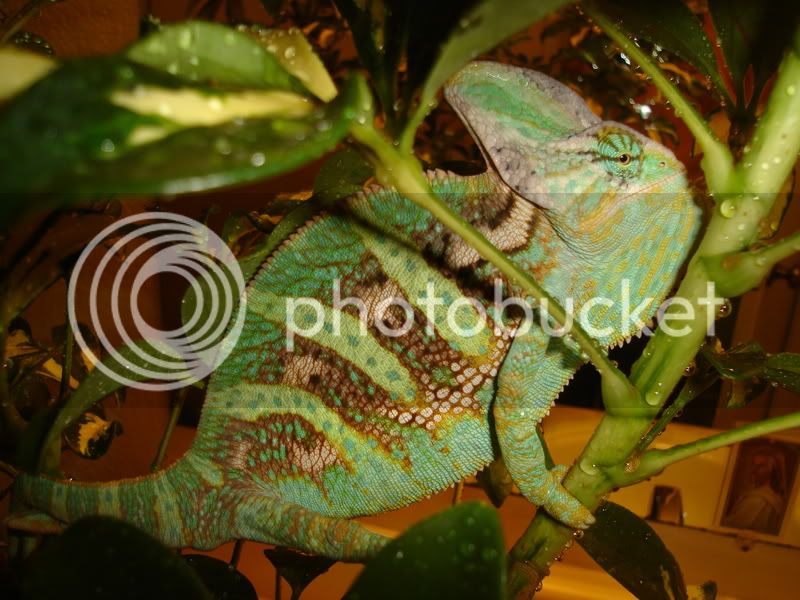 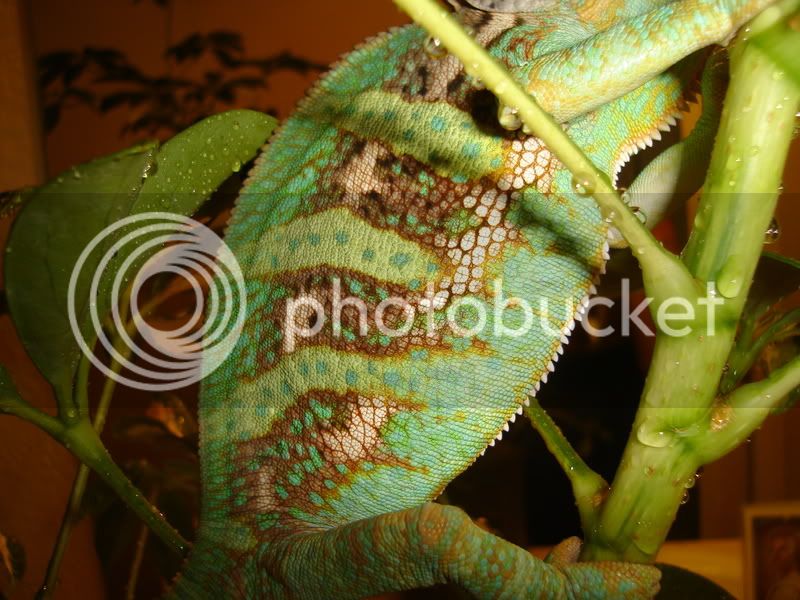 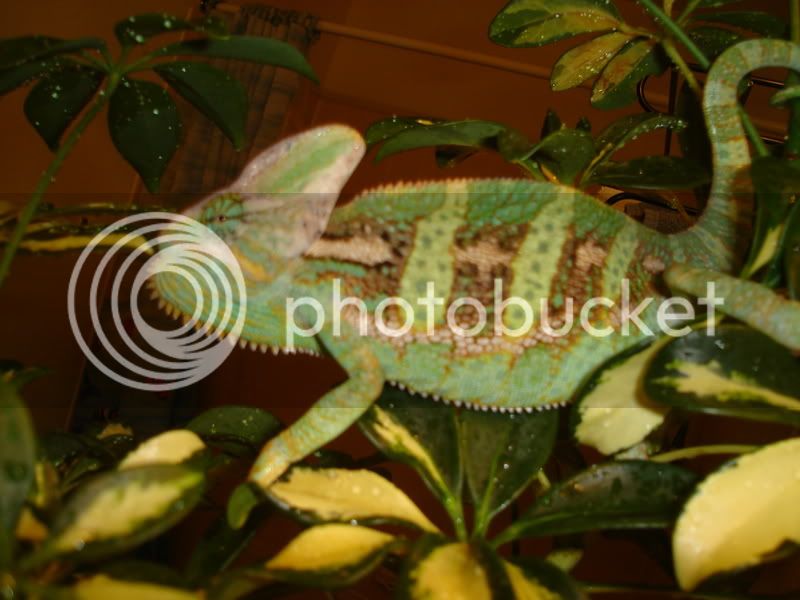 Looking nice. My cham gets REALLY stressed when he sees his reflection, he thinks he's got some tough competition!!

My veiled just wanna bite me whenever he gets a chance!! Puff up and looking mean all the time when he sees me. Maybe I am his competition! LOL

yea pablo has alot of attitude. he always hisses and lunges at me but once hes on my hand he calms down.

Beautiful pictures! I hope mine looks like that when he gets older.

he just might. espically if you got him from mike at flchams. his brothers and sisters are the $100 dollar yemens he is selling right now. he is only 6 months old right now so he still has alot more color to come in.

What up 420 your guy is looking good. I also have a few of Fl Chams veileds...they have much vigor and power feed easily...I have never been dissatisfied with his chams in my own breeding programs except for being too violent...his veileds really are violent, i love that shit 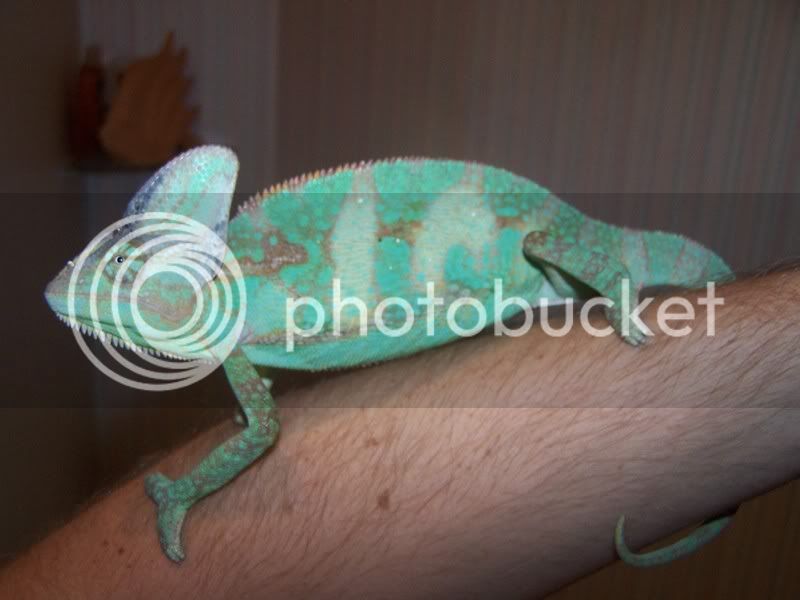 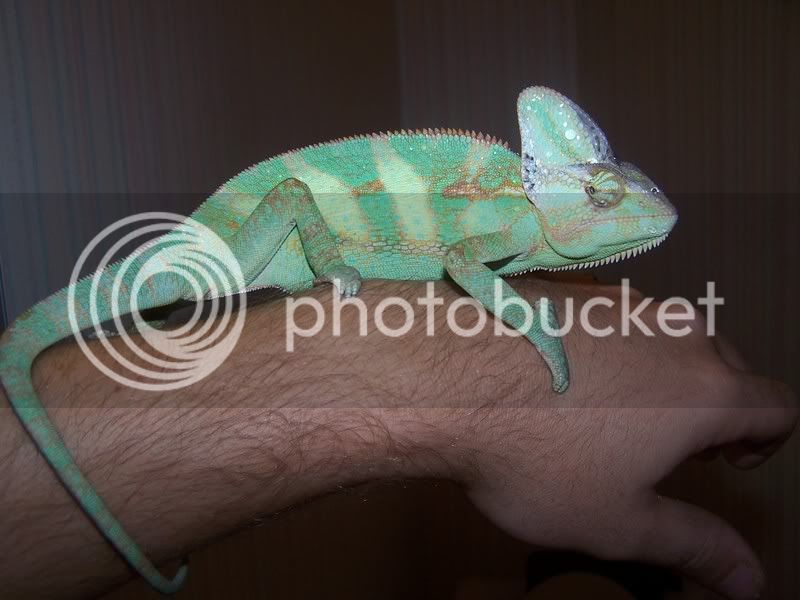 looking good. how old are they? oh and pablo is a beast. i gotta practly wrestle him out of his cage.
Last edited: Jul 24, 2007

they are about 6-7 months old and showing first signs of color. I'm so excited...your guy's color is brilliant, send some of that yellow my way please

also all the neighborhood owls tell me they like the taste of mikes chams the best...gotta be careful by the forest

Dankmeleon said:
also all the neighborhood owls tell me they like the taste of mikes chams the best...gotta be careful by the forest
Click to expand...

owls? im confused. but here are some more pics i took today after his shower. i hope more of the red and orange comes in i really like it..... 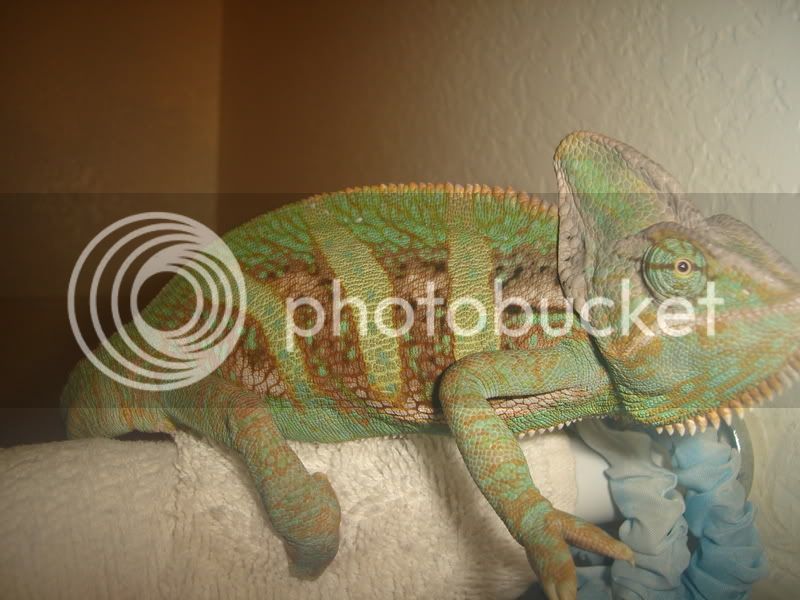 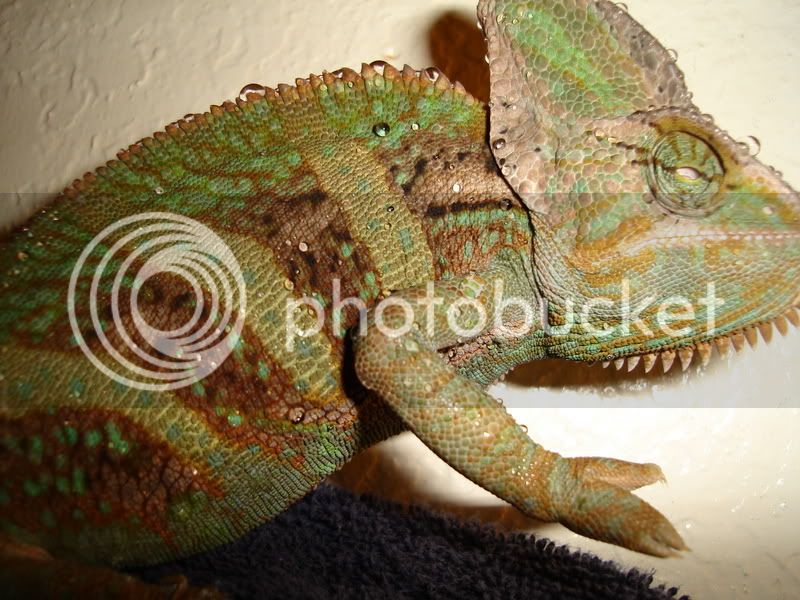 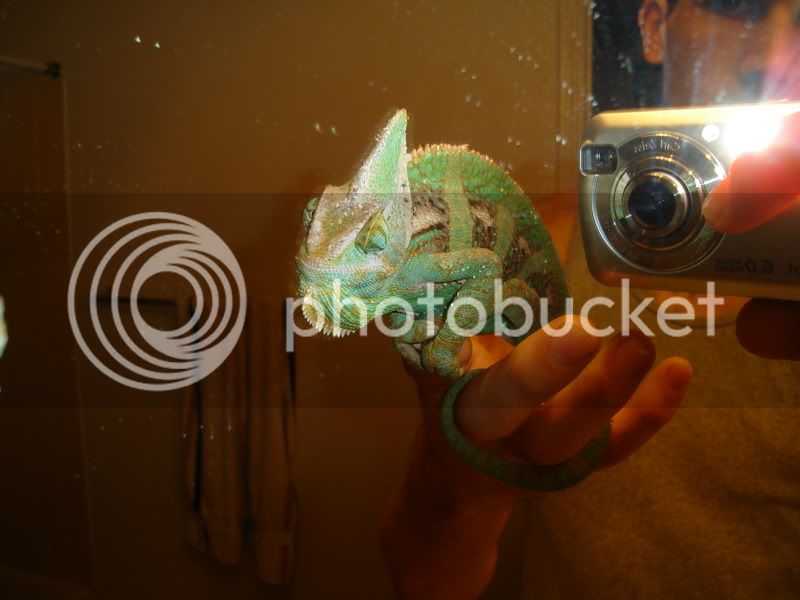 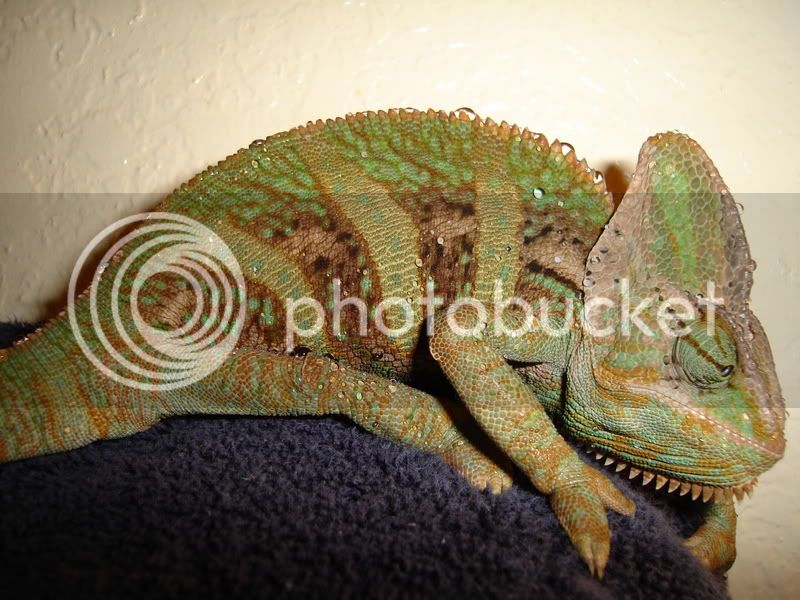 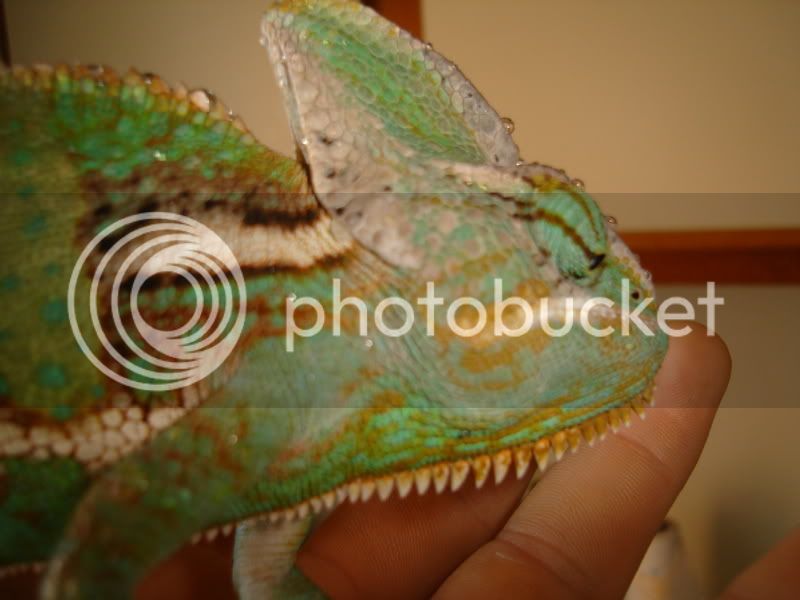 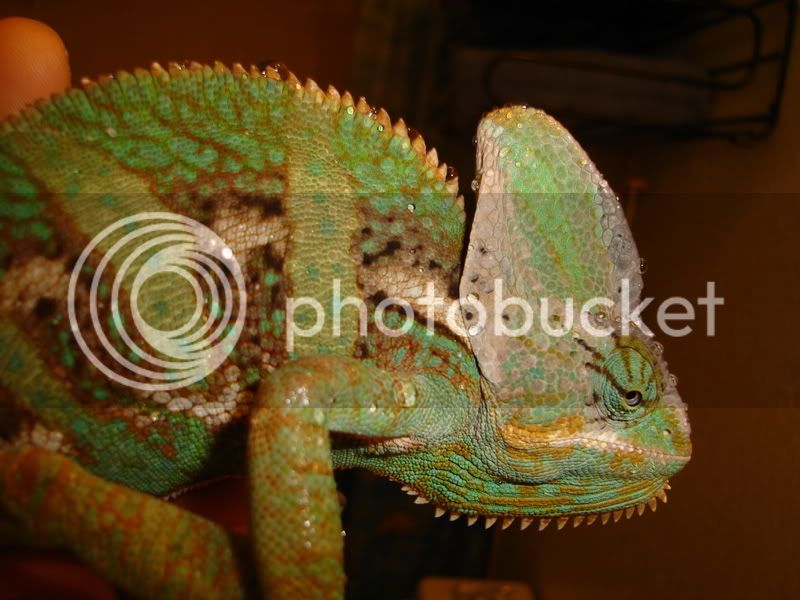 damn he looks really good, I especially like the brown in between his stripes. I live by one of the biggest nature preserves in florida, its literally my front yard....I have been into chams for about 6 months now(i have been getting into salt water reef tanks lately) but I started with jackson chameleons and veiled...after seeing the thread titled open air enclosure, I was tempted to created a table island of tropical plants and create a play area for the chamelons, also my back yard is fenced in so if one did jump down I would just go find it in my tree or around the perimeter....one day I went outside after having gone out to lunch all morning, and the chams were still there glowing and loving the new habitat, when right before my eyes a huge owl swoops down and grabs one and dips off into the daytime woods. I stood there in disbelief....then I ate some mushrooms this night with my mate brian and the owls terrorized our trip session with long screaming hoooooooooots that sounded much like "yes mikes chameleons are delicious, don't buy from color creations hoooot" Hooot, we love african lizards hoooooooot... so learn from other mistakes and never fail to take every outside source for potential harm to your chameleon, I had a girl drop her chams off here and they were becoming sick from the time release fertilizer in the soil dishes she had for them to egg in....just another example

damn dude that sucks. how many cams you got? ever since my last hobby got busted by the po pos i moved to chameleons. i cant decide weather to get a female veiled or a panter next. some dude on kingsnake.com got some sick lookin veields. you should chekem out.

I have 2 veileds that are mine, a jackson...and I'm watching this girl I met on this forums for the summer while she is away in ireland for the summer...one of hers escpaped I'm pissed lol...I have a terrible track record...before this batch I lost like 5 chameleons in a row to owls and great escapes...i fear my hobby getting busted which is why I keep all to myself about it...i don't even tell my best friends i live a double ass life for fun because people say shit on accident sometimes...can't trust anyone with anything but yourself halleluya

sorry for the double post but just out of curiosity, I'm guessing soley on the dankness of your cham that he is kept outdoors...but maybe I'm mistaken and if so what type of lighting do you keep for him

ya that was my downfall. i was too proud of my ladies.
You must log in or register to reply here.

The things you see when you haven’t got your gun...

U
Is this a old burn?