Thinking about a beardie

So I have an extra 55 gal. Long aquairium with a nice wooden stand just sitting empty and unused. I know a 55 gal long would be to narrow once he is an adult and would need a wider one, but would this be an alright enclosure for a juvenile beardie for a while? Also could anyone recommend me to a good website where I can lots of info about husbandry and such. If anyone reading this owns a beardie what do you use for substrate? And a beardie should be able to eat pretty much everything my Chams can eat correct? Like crickets roaches super horn silk and calci worms? Any input would be great thanks in advance!!!!!

Hey there. I've been breeding beardies for over 20 years.

I know a 55 gal long would be to narrow once he is an adult and would need a wider one, but would this be an alright enclosure for a juvenile beardie for a while?
Click to expand...

Yes. I've met bearded dragons whose owners kept them their entire lives in a 55 tank. But IMO that isn't much of a life- wider is better, longer additionally would be better as well. I used to keep them in 4'x30"x30" enclosures mostly. I use larger ones now, but keep my dragons in breeding groups. In larger enclosures these lizards are obviously happier (meaning their behavior changes enough that a casual observation will see significant changes in activity patterns and social behaviors).

Also could anyone recommend me to a good website where I can lots of info about husbandry and such.
Click to expand...

I think there is a bearded dragon forums similar to the chameleon forums.
Probably a good place to start. I'd actually recommend "the bearded dragon manual" by advanced vivarium systems over anything I've seen on the internet about them, although it is getting a little long in the tooth and might benefit from an update.

If anyone reading this owns a beardie what do you use for substrate?
Click to expand...

I've used all kinds of things for substrates. I'll state right up front I'm not a big fan of the current trend of using slate floor tiles. Dragons like to dig around, and tiles can be kind of cool or hot depending. Also I've got pics and film footage of dragons living in very sandy areas in the wild- it isn't all hard compact clay surface. In fact- a lot of the pics of their habitat look very similar to brush terrain found in Utah and Nevada, with similar substrate also. But some is very sandy too.

I've used playsand very successfully for adult dragon, but it is heavy and has to be kept clean which can be tedius. It is also dusty sometimes unless washed first. Babies can easily become impacted from accidentally or purposefully ingesting the stuff. Adults less easily.

For over a decade I used large screened enclosures with grass hay as a substrate very succesfully. It is edible and they enjoy eating a bit of it, they can scratch around in it and dig under it and hide or sleep or brumate. It does easily mold if water is spilled that does not evaporate quickly from a water bowl, but is so cheap and easy to change that really wasn't a problem. Outdoors to protect from the rain I had to cover with tarps so the hay wouldn't get wet- wet hay grows bacteria very quickly especially if there is any fecal matter in the hay- so it must be kept absolutely dry.

In my home I wouldn't want the hay though- it has a (not unpleasant) outdoorsy odor to it. And in a glass tank not a good choice either- lack of ventilation may mean that it does not stay properly dry.

I used paper from the end rolls of newspaper as well- this is safe, though some dragons do eat a bit of it. I don't like the lack of traction (something to consider with smooth tiling also- if tile is used it should probably be rough textured)- nails grow long and when feet do not grip they do not support the legs and body properly. This can be remedied by adding a few large rocks for climbing over and on.

Currently for my kids group indoors I use a thin (less than an inch deep) layer of wheat bran. Bran is available for livestock in big bags (40 or 50lbs) relatively cheap. The lizards can dig and scratch in it and it is edible for them- though probably if they develop a super fondness for it, that would throw off the balance of their diet. Messes clump and can be easily removed.

Outdoors for my groups I use metal cages that have walls that are sunk into the earth. So I use the ground for the substrate. It is all natural and bioactive.

And a beardie should be able to eat pretty much everything my Chams can eat correct? Like crickets roaches super horn silk and calci worms?
Click to expand...

Yes, plus they can eat plenty of leafy greens and everything you would put in an iguana salad, and rep-cal bearded dragon pellets. Especially as they grow into adulthood, the insects are probably best cut back to occasional feedings or even treats after the dragon is full grown.

My dragons taken a few years ago. 1.2 are in each 4'x30" cage with hay substrate. I don't have as many now and never will again because there are plenty in the world being made already, but I still keep a pretty good size colony going with ancestors going back to my first 20 years ago: 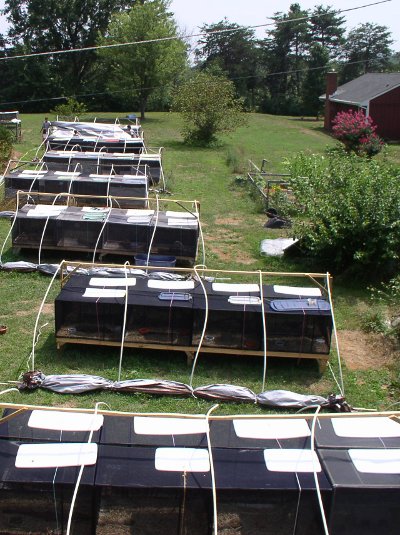 This is how my dragon cages are constructed now, although these are some of my painted dragons, not bearded dragons. This cage is 6'x3' floorspace and enough for up to 1.2 bearded dragons. With in-ground cages and bioactive substrate, it is important to keep things as large as possible for the bio-load the lizards place on it. But they like the space anyway.

I've been building these cages this summer in a 9'x3' size for groups of 1.5 adult bearded dragons and they have done well. The cages face south, the north half of the top is an insulated roof which keeps part always dry in the rain and the western-most 2' of the front is also an insulated roof, which provides shade and protects food bowls from rain completely, as well as providing extra dry space during and after times of rain. The roof must have insulation board under it or the metal roof creates too much heat in the enclosure when it is sunny. With the insulation, the shade in the cage remains cool.

The soil level is about 4" above the surrounding outside earth so they cannot flood in the rain, and there is a hill on the eastern half of the enclosure, which gathers heat in the fall and spring (I had well over 100 degrees in the sun on the hills when the outdoor temperature was only in the 50s during the day and the outside soil temp was only in the 60s this spring, enabling me to begin breeding season several weeks earlier than in previous years).

The hill tapers off about halfway across the cage, so that under the western roof, the earth is lower and there is much space for cooler air.

Beneath each hill at ground level in the enclosure is a large cave with an entrance located on the dry half. The cave has walls made of brick- 1 brick high and 2 bricks wide, covered by 2 large concrete paving squares placed side by side. And then of course soil piled up on top and retained by old salvaged broken concrete blocks or large rocks. The single brick height gives them a tight space which they like and also there the temperatures are less extreme and more stable in very hot and very cold times and the lizards often sleep there. A couple of "tame" beardies have even become sort of feral, retreating for a few minutes into the caves when the cage is approached, exactly like wild lizards scurrying into a tight place, only to re-appear later when they figure out it is only the humans again, possibly with treats.

Thanks for all the great info!! This gets me off to a good start. Nice set ups!! I wish I could have those! Ha I think this post should tell me everything I need to know. I'll have some pictures up soon once I get his habitat set up. Later down the road in a few months I'll probably build a custom permanent home for him, like I did with my cham cages. I'll have some more questions when it comes time for that. Thanks again!!
You must log in or register to reply here.
Share:
Facebook Twitter Reddit Pinterest Tumblr WhatsApp Email Link
Top Bottom