So I know that you can't keep chams in the same cage because of how territorial they can be and one will dominate the basking spot, food source, etc. What I didn't know, or even think of, is how territorial a cham could be over an area that's not their home/cage... I recently built a small free range area in our office/cham room and have been letting my chams spend an hour or so on it whenever I'm home to let them out. My nosy be, Poseidon, is very friendly and runs to the front of his cage whenever I'm in the room so I let him out to play on the free range much more than my other two chams who have to be coerced out of their cages. The other day I had to get my male ambilobe, Loki, out of his cage for some cleaning and while he was out he got to explore the new free range for the first time. While I was cleaning I would look over to check on him and he seemed to be having a grand ol' time. After I was finished cleaning I started to take some pictures of him roaming around but when I looked over I saw Poseidon in his cage and he was not happy at all about Loki being on his free range... He was pacing back and forth, was all puffed up, and wouldn't take his eyes off Loki. After a while Loki finished exploring up high and started moving down to where the plants are at so I decided to let Poseidon out of his cage and on to the free range thinking he would run to the top and act like he was the king of the mountain or something. NOT! Poseidon made a bead line for Loki which was slightly comical because he was puffed up, back arched, and tail tightly curled while he was scurrying towards Loki at full angry cham speed. Poor Loki tried to puff up and look tough to scare away Poseidon but it didn't work and Poseidon ran straight up to him and started trying to shove him off the branch with his head. Loki finally unfroze and tried to climb to the next branch down and Poseidon actually grabbed hold of Loki's tail as he was trying to get away. It was about this time that I finally got over my disbelief of what was happening and separated them... I moved Poseidon back to his cage and then got to Loki who was hiding in the plants and starting to go dark from the stressful encounter but was otherwise unharmed so I moved him back to his cage to calm down and recuperate.

I have never had anything like this happen before and the handful of times they've encountered each other out and about (in a bush when outside or climbing around our curtains inside) they kind of eyeball each other a little, occasionally puff up, but then move on without ever interacting. It also surprised me because Loki is older (15 months) and bigger (14" 120g) than Poseidon (11 months, 12", 90g) which didn't deter Poseidon from picking a fight lol. I now keep a towel in the office to cover the front Poseidon's cage whenever Loki is on the free range to avoid any future incidents. Has anyone else ever had a similar experience?

I almost forgot, because I had the camera in my hands when this all started I have a few pictures of the incident... 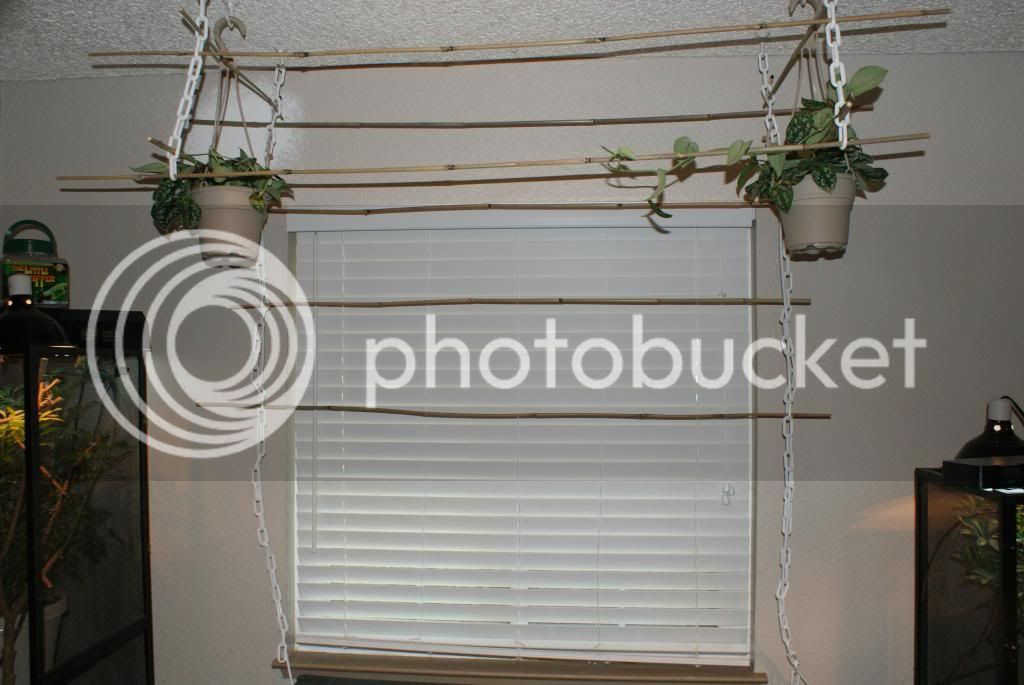 Here's Loki exploring and minding his own business 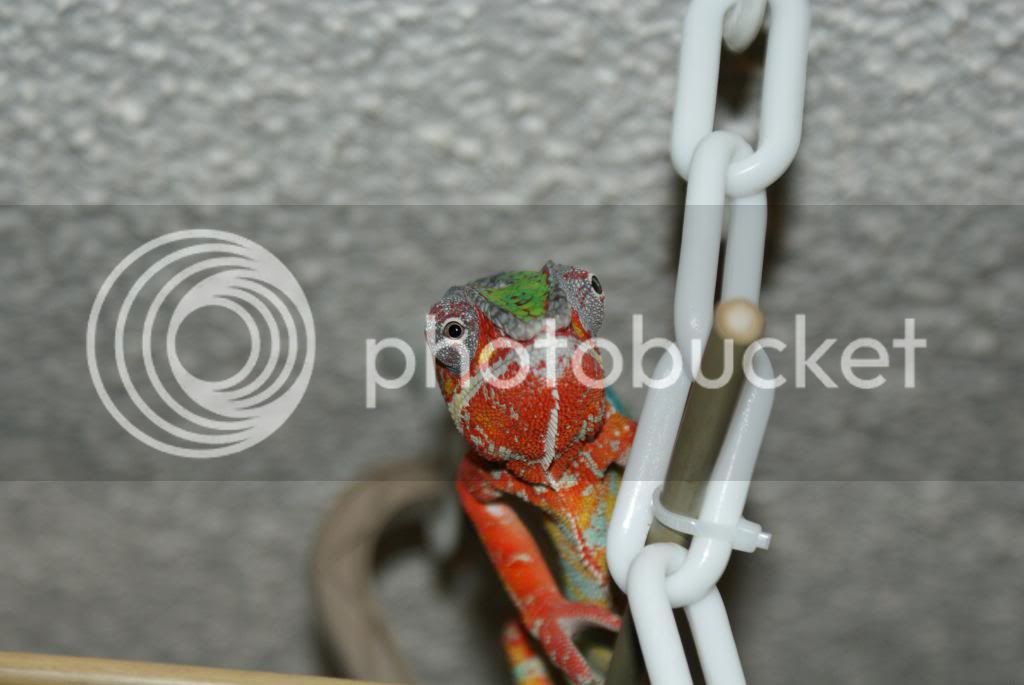 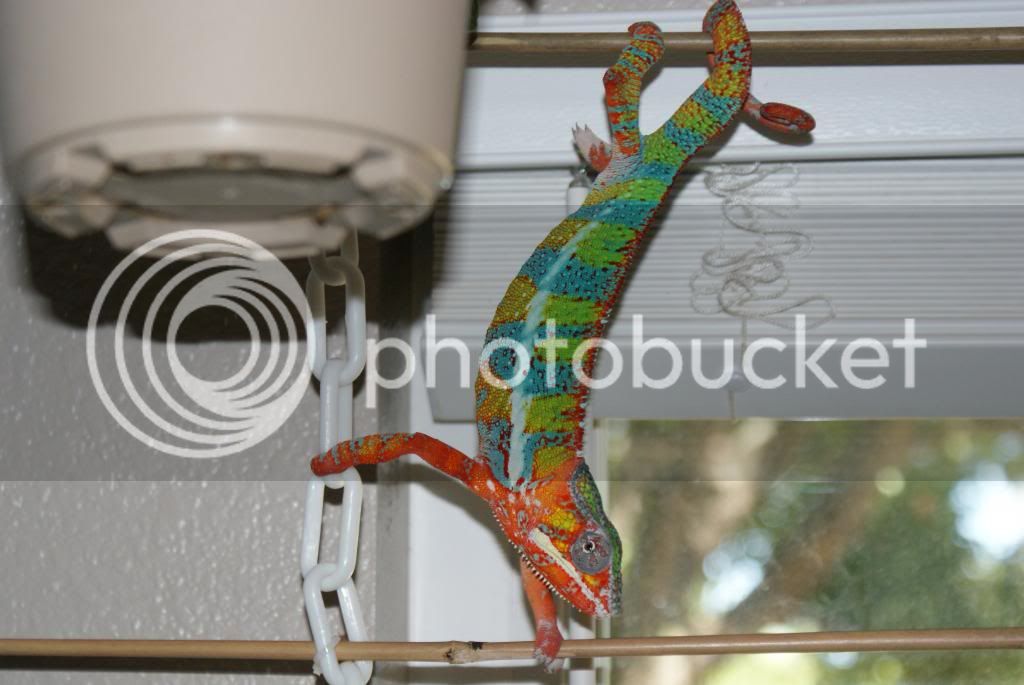 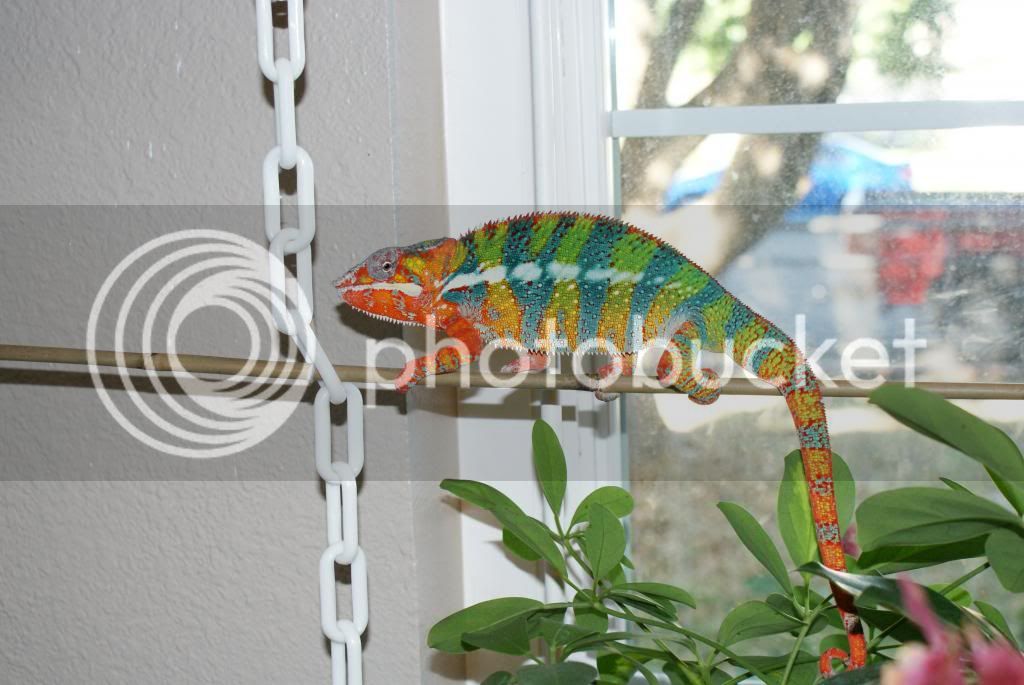 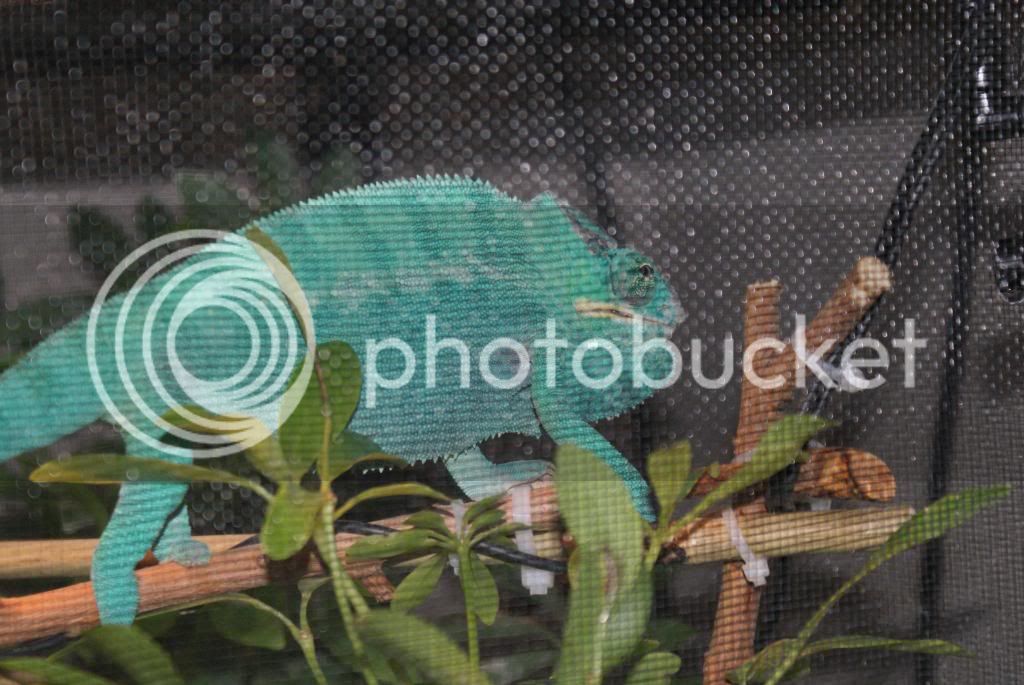 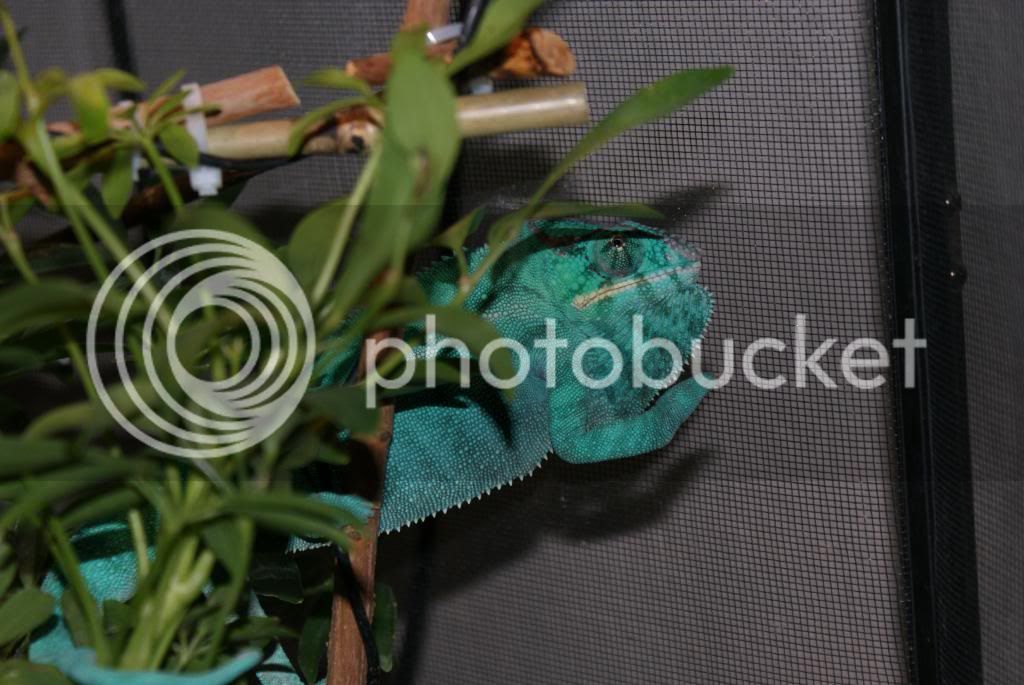 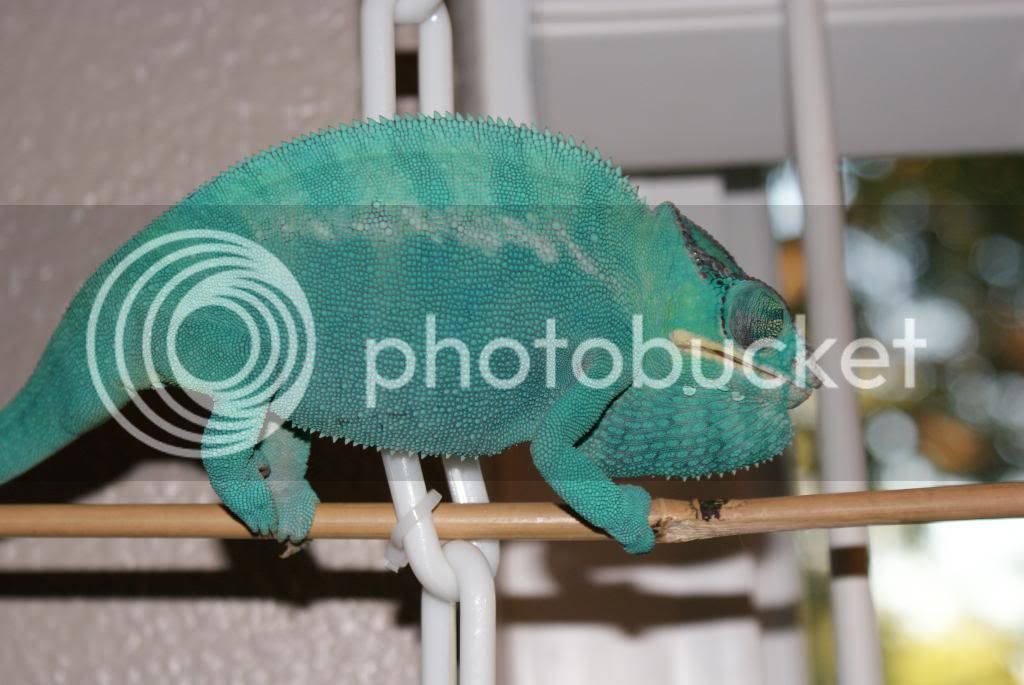 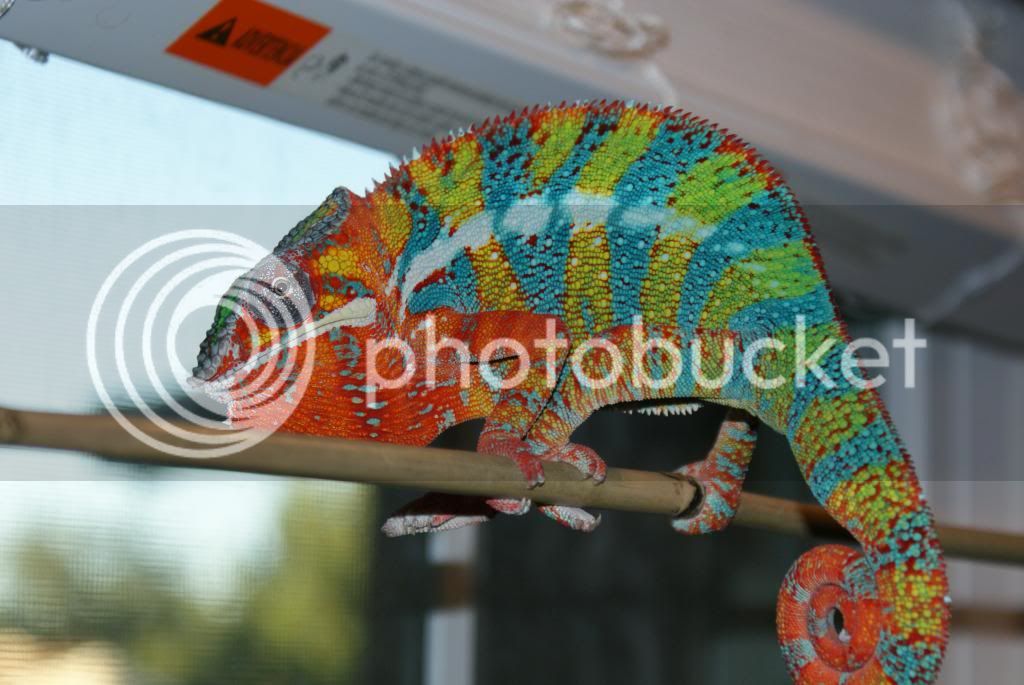 Yes, I have two Veiled brothers that hate one another. Malachite and Jade, Jade is bigger, but he never wins a showdown. When they were about 5 or 6 weeks I had to separate them because of fighting, it was terrible. Recently, on an outdoor excursion, I distanced them apart on their own trees. I don't really keep track of which tree they're on, but for the most part Jade stays on the Maple and Malachite on the Gardenia. This time however, I guess I switched trees... Malachite slowly climbed down and walked over to the Gardenia where Jade was chillaxing. He climbed up and began grabbing Jade by the gruff of the neck. He began pushing big Jade off and nearly knocked him off the tree. I jumped in and pulled them apart. It was interesting to see this because the whole time Malachite never puffed or spotted or anything. Jade began puffing up and striping, but only after he was wrestled off of his branch. Chameleons are spiteful, hateful creatures... They seem to think the world is theirs alone. Like me.

VigilantSpearIII said:
Chameleons are spiteful, hateful creatures... They seem to think the world is theirs alone. Like me.
Click to expand...

Poseidon needs to learn some manners

Thanks for the replies everyone. I'm glad it's not just Poseidon lol


VigilantSpearIII said:
Chameleons are spiteful, hateful creatures... They seem to think the world is theirs alone. Like me.
Click to expand...

This definitely started my day off with a smile lol

If they can see it...it's in their territory and must either be chased off, bred, or escaped from.
You must log in or register to reply here.

Chameleon won’t go back in cage
2 3

L
Can I use reptile cleaner on

Just an update on a panther