hello
my lil guy used to crawl on the screen a lot and is very active. I've only noticed recently but at some point he must have snapped a nail or aggravated it and his toe looks pretty sore bless him.

I'm away for a week or so and doing a lot of overtime at work so can't take him to the vet for a little bit. Is there anything anyone can advise for me to help him until I can get him to the vet please? 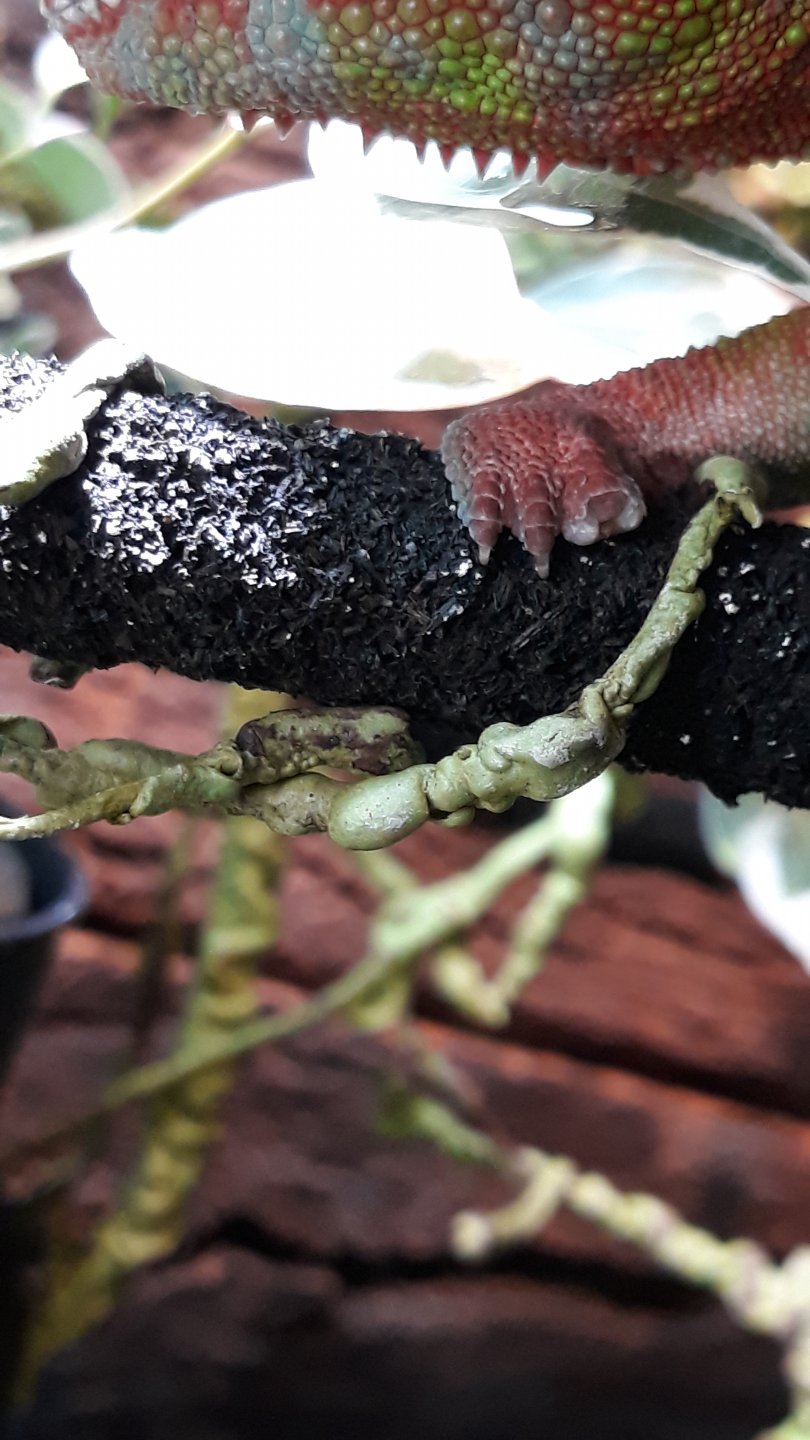 Ouch thats not good at all.sometime their nail got caught up in the screen cage which does happen from time to time.
If the infection is already start under the toenail. And then the infection starts in the toe can start to spread up the foot and leg.
I would recommend bring the cham to a chameleon specialist vet asap..the vet probably will prescribe the Baytril , in the meantime try keep the missing toenail area as clean as possible.

This needs attention sooner than later. Can the vet arrange someone to care for your cham while you are gone? Its already infected and will only get worse. At the minimum he could lose his toe...at the worst end up with a systemic infection he doesn't survive. He's in pain now and that will also get worse, which may mean not eating or drinking. A bad cascade of events.

hi thanks for the quick replies. I rang the vet again earlier this morning and have arranged for someone to take him. Earliest they can squeeze him in is Friday as I think they only have the one exotic vet in the practise.

So he's likely to prescribe an antibiotic? I know you can't treat from a pic, its just so I know I'm getting good info from the vet.

In the meantime I'll deep clean his cage before I go away. shall I try and clean the area with a cotton bud? I don't have any disinfecting stuff for use on an animal, but soapy water?

yes, they will most likely prescribe Baytril or another anti inflammatory to make sure the infection doesnt spread throughout the leg, its hurting him enough so i wouldnt touch it. soap is potentially poisonous for reptiles so dont get him hear soap.
A

chloe924 said:
hi thanks for the quick replies. I rang the vet again earlier this morning and have arranged for someone to take him. Earliest they can squeeze him in is Friday as I think they only have the one exotic vet in the practise.

So he's likely to prescribe an antibiotic? I know you can't treat from a pic, its just so I know I'm getting good info from the vet.

In the meantime I'll deep clean his cage before I go away. shall I try and clean the area with a cotton bud? I don't have any disinfecting stuff for use on an animal, but soapy water?

I always keeping a separate cage with just basic needs for a sick or cham who needs more attention.Then I can clean out the dirty cage with diluted bleach n hot water .
In your case, I will set lots clean branches for him to stand on in the mean time.
Disinfect those branch n let them dry completely prior u put ur cham back in.
And the most important thing is bring him to see a CHAMELEON SPECIALIST vet not just a regular exotic vet..I will keep your cham in my prayer n keep us posted with his recovery.

Ok I will deep clean his cage tomorrow morning. I do have a spare reptibreeze I plan on using as an outdoor cage when the weather gets warmer, but he doesn't react well to a change in routine and not being allowed out of his cage. So I don't want to stress him further when I'm away.

I might keep the plants out for a bit and I have a steam cleaner that I use to blitz it every month I can use, along with f10 cleaner. When I get back from my trip I can move him for a bit so I can disinfect things thoroughly.

Thanks again for all the info and I will definitely keep you all updated! He's still super active and I've not seen him avoiding the leg. So hopefully I've caught it quickly enough to avoid any further lasting issues, poor little guy! I just wish I'd noticed it sooner, I feel terrible about it. 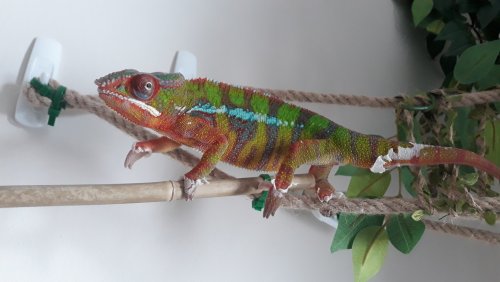 He is Gorgeous remind me of my old one lol.

So the vet apparently isn't convinced that it is an infection. Instead swollen trauma due to the nail beneath trying to grow back as it isn't entirely snapped off. She took some pictures to show others for further opinion and he is on Metacam for 5 days to try and combat the swelling. It hasn't changed since the picture so hopefully that's the case and the toe is getting closely watched.

If the swelling doesn't recede in those 5 days its most likely and infection. If thats the case, he should be prescribed an antibiotic such as Baytril. I would keep an eye on it for now and do as the vet suggests.

With any kind of medication make sure he is staying hydrated.

Thanks for the response and sorry mine is so late. It's been hectic!
So the swelling hasn't improved unfortunately (I wasn't optimistic to be honest) but at least it hasn't gotten worse. I had bought a load of silkworms to help with hydration as I do struggle with keeping him well watered. I also hand sprayed the cage with water for a minimum of 5mins each morning in addition to his usual mist king schedule and Big dripper & currently testing using a humidifier for 3h at night.

He does have me worried however. Other than the first day of medication he hasn't eaten a thing I've put in his cage, even the silkworm and superworms he usually goes nuts for. He's also not pooped, though I've seen him attempt it (he only ever goes outside of the cage).

I dunno! I managed to get time off work so I can take him back to the vets again on friday. Seems to be the only day they have an exotic vet in. It sucks because currently I have no time to monitor or try and help his behaviour, other thanhalf an hr in the morning, as he is curled up in his sleeping spot by the time I get back home. From what I can tell he is as active as ever, though his trust in me has taken a massive dint from the stress of forced medication.

Is he eating and drinking well? Swelling doesn’t necessarily = infection. Plain old injury causes infection too. Is it a case of chameleon in-grown toenail?

He's never been much of an eater and his urates are rarely pure white, instead more of an off yellow. His eyes aren't sunken in though and he's always been very active. I also managed to lure him into eating this morning by adding wax worms into the mix and he's pooped so I feel a lot less worried now! Was so stressed.

The anti inflammatory meds haven't done much and unfortunately it is more than one toe as I found out after his vet visit. I don't hold him much other than to transfer him to and from his free range so didn't notice. When he was younger he was terrible for crawling all over the screen walls of his cage and did pull some nails.The large free range I built for him for that reason and loads of vines in his enclosure have stopped that behaviour, so I believe it's somehow an exasperation of an old issue? I dunno! I'll see what the vet says.
You must log in or register to reply here.

Closed eyes and not moving much

Not sure if I should be worried or not..