So as of the last few weeks every time i take my veiled outside for sun he immediately goes really skinny and starts doing the skinny hiding behind a stem thing. Like they do when they are really small and hiding. It happens right when i cross the threshold of the front door. He immediately does it and runs to the other side of my arm so i cant see him. Then if i rotate my arm he will go to the other side all while being skinny and hugging my arm. Once outside i go ahead and put him in his trees and he does the same thing for a bit. After a while he will go ahead and relax, but after that he starts getting really big and bright but still tries to hide. When its time to go in he doesn't trust me and I have to literally peel his back claws from the stems to get him off, and he grips my fingers extremely hard on the way in and is actually aggressive. He actually got the point where if i looked at him he would hiss at me outside. When i bring him in and put him in his cage he flys off my hand and hides in the back of his cage for about thirty minutes or so. It worries me because i want to give him that outside time but it seems to just really worry him and i worry this is more negative than positive? Has anyone had anything like this happen?

Are you able to bring his enclosure out? He would probably feel more comfortable in his environment. I used to take my enclosures out and let them chill for a bit before getting them out to interact with.

My veiled does the same thing it'll take them a while to get use to outside. Bring him out in his cage

Staff member
Its kinda normal for them to get behind a branch or something when they are unsure of the situation. My veiled does the same type of "duck for cover, flatten out and hide when I first bring him outside, and I have the holes in my arm to prove it! After a few moments he checks the surroundings out and gets comfortable and starts to bask in the sun. Kinda looks like this... 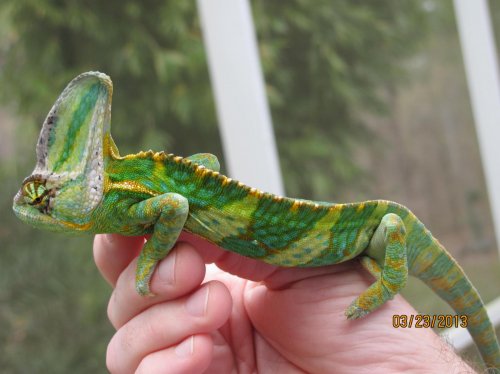 my panther is doing the same thing

When they are exposed to the outdoors they may see something you do not. A bird, a squirrel, anything that could be a potential predator to them. I was holding my one guy yesterday outside on my deck and sitting at the table under the umbrella. He was doing the same and come to find he was scared of the green round plastic top of the little dripper that was sitting on the table!!! I thought it was anything but that and I held it up to him and he freaked out! You never know what they are going to be afraid of and bringing them outside opens up a whole new can of worms so to speak. I don't think it is the sun, but something else he is seeing.

Mine does the same thing, he will get as skinny as possible, turn an ugly grey color and hide in my arm.....he hates it out in the sun but I want so bad to get him to liking it because it is so good for them.

We have 2 money trees that are approx 4' tall and have a vine wrapped in between them. Our chams love to sit in the trees and soak up some sun. Our male actually likes to try and escape every once in a while
L

Yea I think i am gonna have to build/buy a seperate enclosure to get him used to the outdoors. I feel as though its something more than just something he sees scaring him, no offense carol cause i know you are very experienced, but it doesn't just happen in one area outside. The minute I take him towards any door leading to the outside world he immediately switches. Its almost as if the switch to a more bright, and open ambient environment just sends him into survival mode. Im not so concerned about the hiding and all that because i know they do that when they feel like danger may be present and he probably does need to get used to the outdoors in order to feel secure and enjoy it. I get that but its more of the aggression that comes with it. I usually put him on his plant and just walk back about thirty feet and let him soak in the sun. however, when its time to go back in he is super aggressive and scared almost like the whole thing was a traumatic event and not worth the benefits of taking him outside. Thats mainly the part that im concerned with. Should i keep taking him out and hope he gets used to it? I have used his big cage in the beginning and basically it was the same result except he was actually hissing at me from inside the cage and took him about thirty minutes also that time to finally come out from hiding once back in the house. This is why I thought i would give an open plant a chance, cause he is much more nice when out on his free range or on plants. That however proved failure also. Should I keep trying with him in the cage?
You must log in or register to reply here.

Veiled Cham dark colors/hanging by the bottom of his cage.