Little Man Simba said:
After researching some threads and some great posts by Beman and kinyonga, I believe that I have a proper supplentation schedule (using Beman's recommendations from a post) and I am going in tomorrow to pick up Supplements tomorrow.

I plan to use:
-Arcadia revitalize w/ d3 (looks like every 8th feeding per Beman's recommendations? That would 3x/month?)
-Repashy supercal no d (every feeding)

With this, do I need anything else (magnesium)?

Should I wait a week or two to start introducing Supplements again? I am trying to detox him, but don't want him to be lacking in other nutritients)

I am also picking up new lighting. I'm thinking he is receiving too much uvb? Until I am able to get the tube lighting, does anyone have any recommendations for dome uva/uvb bulbs (screw in)? Is the uva doubling as a basking light as well?
Click to expand...

I put this in the other thread but I am going to put it here as well.

So Arcadia supplements have to be used with the correct UVI level at basking. So if there is a lighting issue I would not move to this supplement. Make sure you are still using calcium without D3 this balances the calcium to phosphorus ratio of the feeder which is very important for bone health. You can detox them on the other supplements containing D3 or A if these were being over supplemented and the concern is a D3 or A toxicity.

Per your exact question. Yes you could use the revitalize D3 as your multivitamin and repashy Supercal NoD. Your rotation would be the Repashy NoD at all feedings and then the revitalize D3 two times a month say the 1st and the 15th. But again due to the extremely low levels of fat soluble vitamins in this one you have to make sure that the UVB lighting is spot on at basking.

No compact screw in bulbs are sufficient. Your wanting a T5HO fixture and a 5.0 or 6% bulb in a 24 inch for your cage size. This is the best option and the recommended option for chams. Without the correct lighting and distance to basking chams suffer from failure to thrive, MBD, and other major health issues.
L

I would like to thank everyone who has helped contribute advice for Simba and I. I have changed a lot this past week and wanted to update everyone.

First, I have an Arcadia T5 6% light on the way, but in the meantime I changed all of Simba's lighting. As I said last week, the old red heat bulb is gone. (BTW, is this light bad for all reptiles? I do have a beardie and leopard gecko as well) I have also replaced the daylight blue uva bulb and the uvb. Please let me know if these should be ok for now until the arcadia comes in: 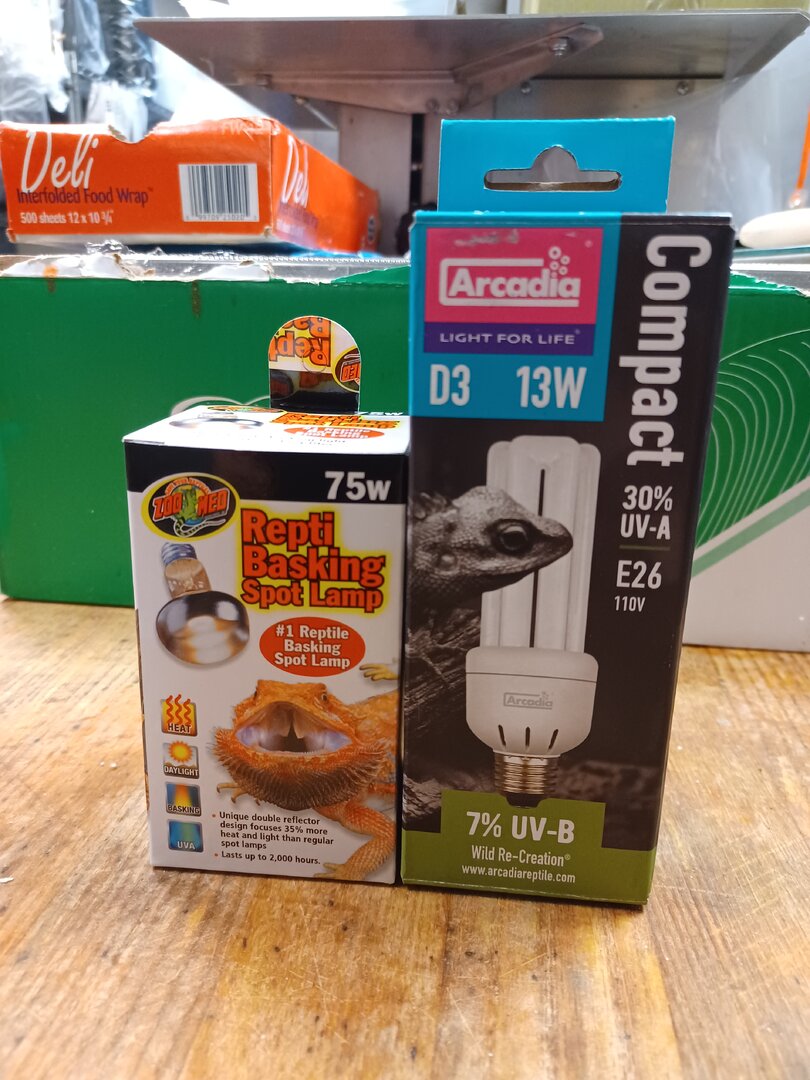 Supplements:
Until I feel his lighting is at the ideal level, I decided to stay away from the arcadia supplements and the pet store was out of the Repashy no d3. I picked up the reptical no d instead, and use the reptivite w/ d3 as my multivitamin w/ preformed vitamin a (acetate) &d3 every two weeks. 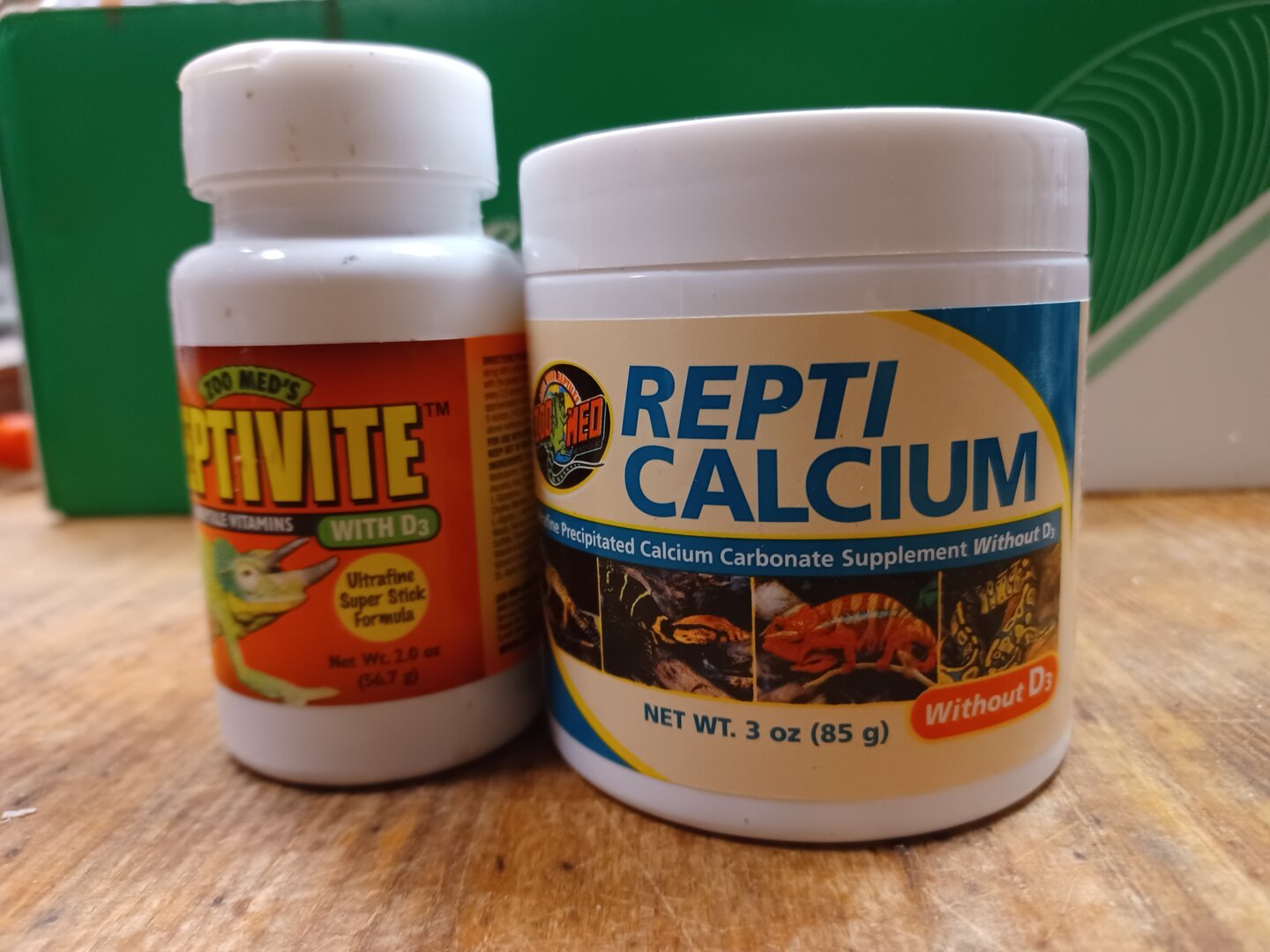 Diet: I found a great new independently owned pet store that has a great selection of feeders!
I picked up some dubias (my first time with them) and superworms, waxworms, and a 2 small hornworms. They are currently munching cucumber, carrot, mixed greens, potato, zucchini and celery. Should I be dusting their food with calcium (no d)?

And, last but not least, I santized & redid his habitat because I started worrying about infections he could have picked up while at the vet clinic (or in surgery). I took out some of the old foliage and netting 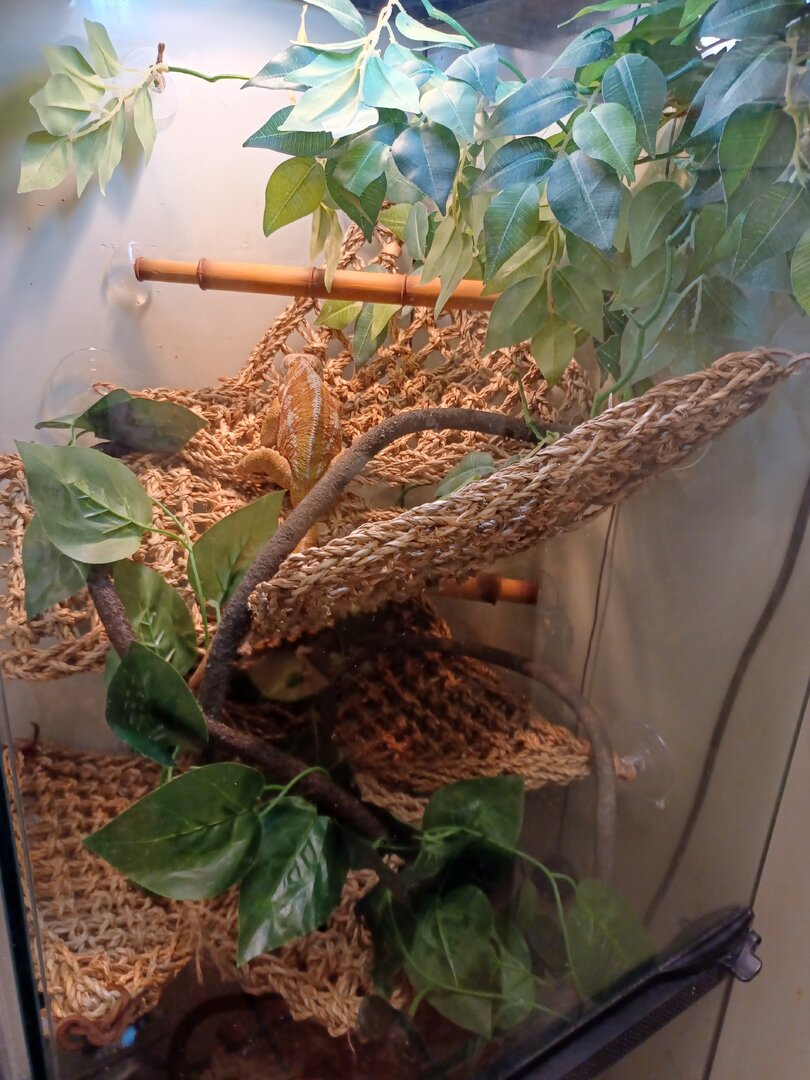 This is him after his first morning mist. He climbed around today! Although im noticing that he is always trying to get higher. He's been parked at the very top. Eyes are open much more often 😁 And his eyes are clear and alert when open. A note, he climbed in to this position pretty well! The first time in weeks! He fell off once after it got slippery from his misting, but I have his "safety net" below so he won't fall far if he does, "a la Cirque de Solei".
He is still lethargic, but improving. He has eaten a little this week! Still no poop. 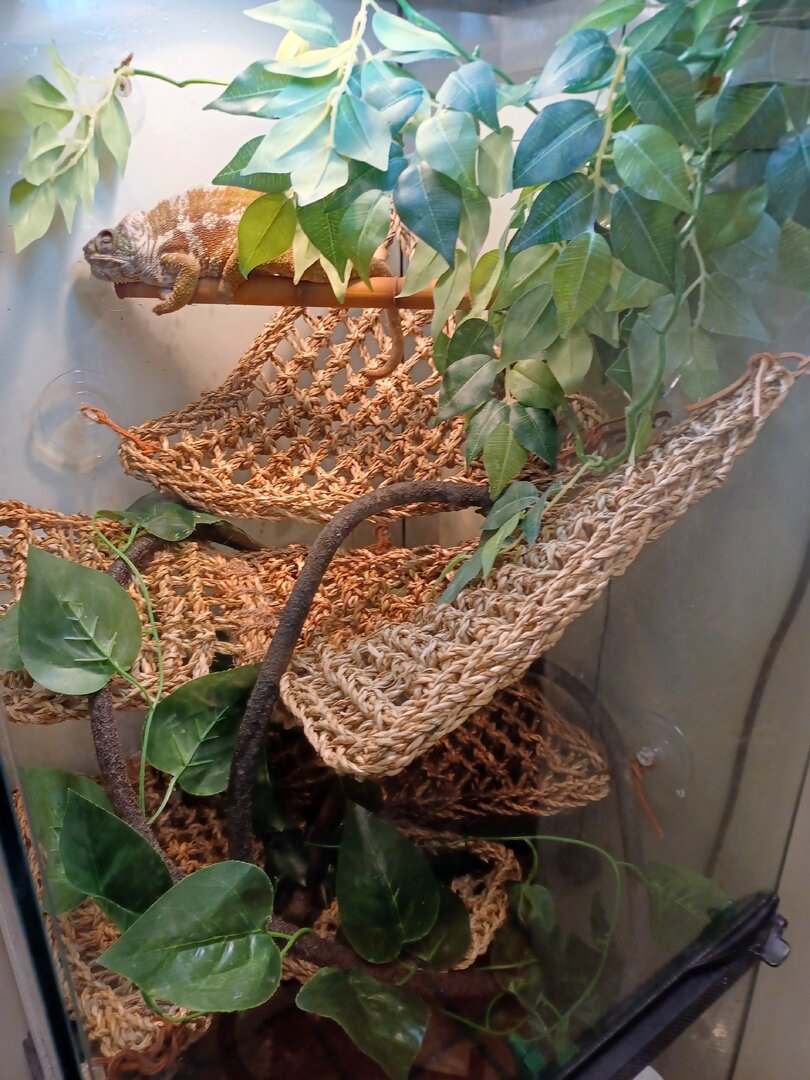 Looks like you’re making great improvements! The red light is pretty much bad for all reptiles…not of any use for beardies or Leos either. Completely off topic - what locale is Simba?
L

MissSkittles said:
Looks like you’re making great improvements! The red light is pretty much bad for all reptiles…not of any use for beardies or Leos either. Completely off topic - what locale is Simba?
Click to expand...

Simba is a tamatave panther chameleon that I purchased from Florida Chams (flchams.com). From their site:
Tamatave is a locale from the east coast of Madagascar. This locale has a green base coloration that turns red when in display with white speckling. Tamatave males are very similar to specimens from Maroantsetra but with more red then orange. 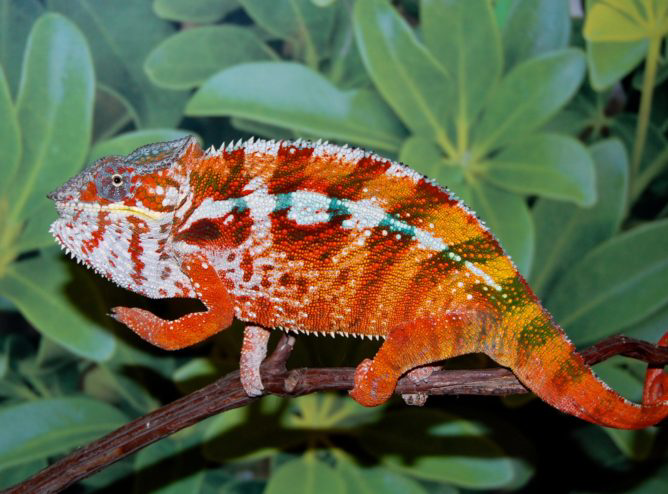 Thanks for your interest! Simba has only displayed the red, black, orange and white bars when coming out of the vet's office after receiving injections 😪🥺, but I suppose that is a good thing.

Is that a pic of Simba? If so, he’s gorgeous! 🥰 I hope he gets to feeling better and getting some of his colors back. 🙏🙏🙏🤞🤞🤞
Btw, I use those same supplements for my chameleons and have had no problems with that regimen. When I got my panther guy, he came with an eye issue that took a long time to fully resolve. I feared it may be chronic, but the ReptiVite keeps his and all my other cham’s eyes healthy.
L

MissSkittles said:
Is that a pic of Simba? If so, he’s gorgeous! 🥰 I hope he gets to feeling better and getting some of his colors back. 🙏🙏🙏🤞🤞🤞
Btw, I use those same supplements for my chameleons and have had no problems with that regimen. When I got my panther guy, he came with an eye issue that took a long time to fully resolve. I feared it may be chronic, but the ReptiVite keeps his and all my other cham’s eyes healthy.
Click to expand...

This is not Simba, but his brother I believe. Simba does have very beautiful markings as well though. Someday i hope to get a good picture of him (although i do hate seeing him distr%That's very reassuring to know that this combo should work. Do you use anything else? I haven't supplemented in a few weeks to let his levels go down, but I do wish I knew a supplement I could give him that would help him more 😔

No, those are the only supplements that I use. I do keep all of my feeder insects well fed though with fresh produce and a bit of Repashy Bug Burger to which I add a pinch of spirulina and bee pollen.

Oh I am so happy Simba is improving! These are my supplements. One calcium is with d3 the other without. The cricket food is great. I started using recently and they love it along with whatever fresh vegs on hand in the frig. The liquid calcium i give when one is having issues or my new female panther needs for eggs. I inject 0.2cc into the middle of a hornworm which the chams eat right away. When Simba is stronger and you dont have to worry about falls, Flukers makes good vines that are not very expensive. I like the medium at basking and angled upward for sleeping spots then i got a bunch of the small size vines that i situated so they can easily climb to the branches. Also the plants provide cover so they can hide and shade when they are hot. A bunch of live plants are really necessary for panthers cause they need higher humidity and the plants help. I want to compliment you on taking action with the advice you have been given. Yiu wasted no time and i just love that! 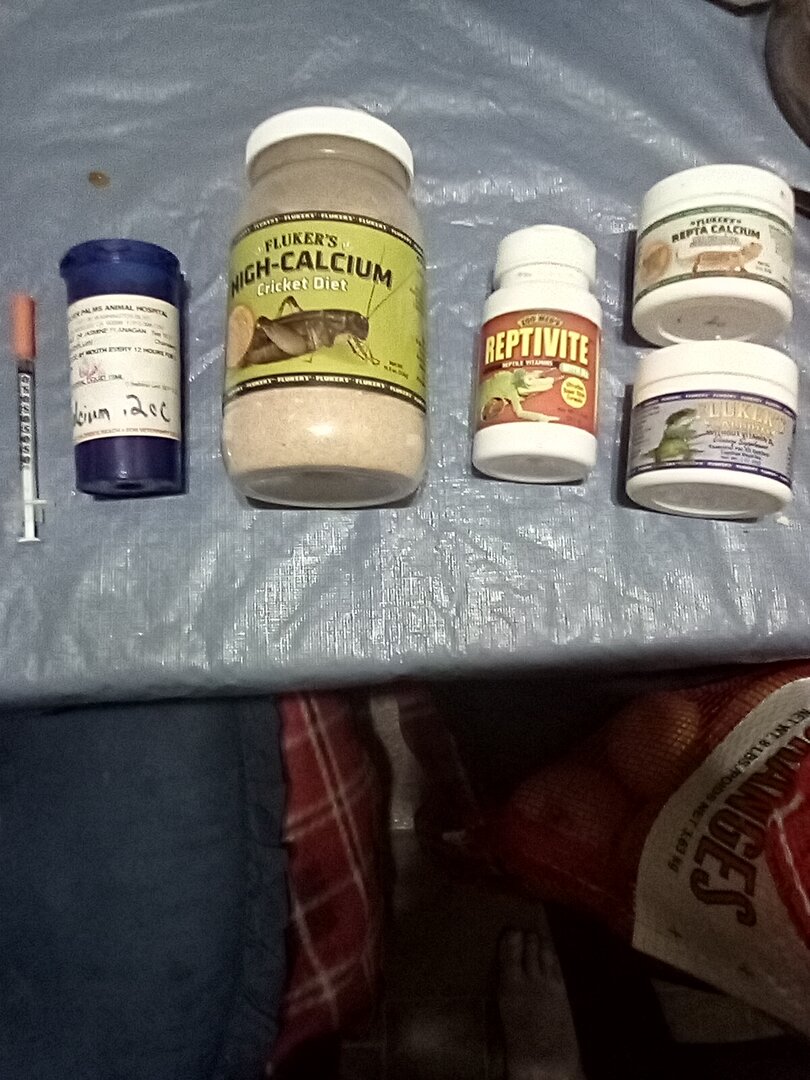 Staff member
I've seen a correlation between chameleons that have necrosis of the end of their tail and over supplementation with D3. Very often it is a chameleon that is getting D3 daily that loses the tail end.
You must log in or register to reply here.