Photos of my boy Ziggie

I'm sure everyone on my facebook is getting fed up seeing photos of Ziggie, so I thought I'd post my little man here where I know others are actually interested.

This was ziggie the day I got him and in this picture he's around 2 months old.. 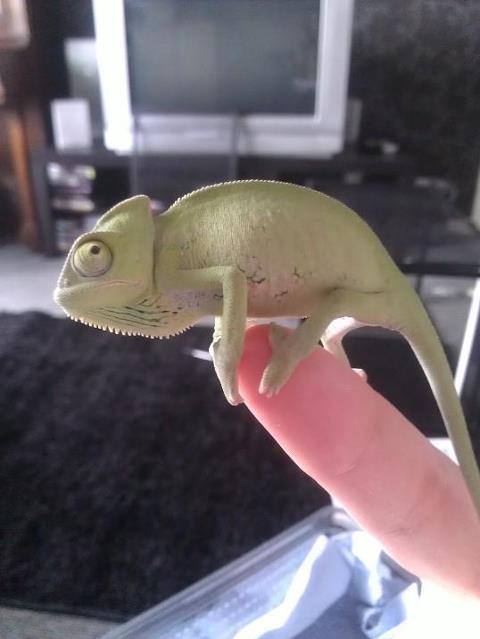 This is him venturing round his new plant

Under his basking lamp

Well, I almost had a heart attack when I walked in and saw this! First shed with me, scared the life out of me

I heard it was good to get your cham out in the sun for a few hours while it's at it's warmest, here in the UK it's never actually THAT warm so he lasted a few minutes outside before he got huffy!

I took advantage of the empty viv on cleaning day to get this cracker!

My boy is getting big!

I'm thinking of making him a free range run sort of thing because I'm SURE he wants out, he climbs to the bit of the viv he knows opens and i swear it's like he's pushing it to get out... it's hard as this isn't my house, so I put a few plants on the floor thinking that he'd go straight for them... but nope, he decided to go along the side of his door, drop on to the arm chair, up one curtain, along the pole and down the other curtain!! Luckily the dogs were outside :/ wee monster!

I'm not a bug person but it turns out looking after these little things takes just as much time and effort as ziggie himself!

I've cleaned his viv today and bought a new ficus which is a bit bigger than the other one (eventhough it's been trimmed down) and I don't know if I've over done it? Does it look too much in there? I've got 2 fake sets of plants too, just little ones, and a few bamboo sticks? Feedback would be appreciated!

This was taken ten minutes ago, ziggie exploring his new plants and fresh enclosure..

Ziggie is adorable! He reminds me of my little 3 month old Sage.

Aww thank you, he's my pride and joy is ziggie! Do you think i've over done it with the massive plant or is that alright? x

Dawwww! Ziggie is awesome!
You must log in or register to reply here.

My Boy Is Gone

Videos of My Sweet Boys
2