Panther chameleon suddenly eating less and not sure why?

Our little man used to eat everything in sight but over the last week he has started eating a lot less and today he hasn't eaten anything yet (it's 11am uk time). He is also always desperate to be out of his enclosure. As soon as he sees us he wants to be out.

He's about 5-6 months old and nothing has changed in his care other then we wonder if he's ready for his big boy house but would that cause him to stop eating? He's still pooping and they are fairly large although not quite as large. the urate is a good colour. Do chameleons start to eat less as they get older?

O, we re-arranged his set up inside the viv to give him a bit more space to move and he seems suspicious of the new set up, could it be that?

Your Chameleon - A 5-6 month old male panther chameleon. We've had him since 1st May

Handling - Every day pretty much becuase he launches himself at us

Feeding - He has a quite a variety: hoppers, crickets, super worms, calci worms, dubia roaches, silkworms, wax moths. They are gutloaded with bug food plus fresh stuff like Kale, Grapes, Sweet Potato, Watercress, Greens. He was eating like 10+ and now it's maybe only 5-8 and today and yesterday less than that.

Watering - A huge hand mist in the morning. Then an electronic mister during the day when we are at work, then another mist in the evening plus a dripper.

Fecal Description - His poops have always been big and everyday. He's still pooping. The urate is white, some days a little less so but in general we haven't been concerned. He's never been tested for parasites.

History - No, he's been growing like a weed since we got him. As he has started eating less we have weighed him daily and he is still putting weight on.


Cage Info:
Cage Type - He is in his baby enclosure still. It's an exo-terra 45x45x60 but we are going to be ordering his XL reptibreeze within the next week or so. We were trying to hold out until August but we think he just wants more space.

Lighting - A 5.0 repti sun UVB tube with an Arcadia reflector. It's on the mesh on top of the viv. Less than 6 months old and is on for 13 hours a day (on a timer)

Temperature - His basking spot is 90 and is on a dimmer stat. Around the cage is ranges from the high 70s at the bottom and 85ish near the top. Measured with electronic temp thingy.

Humidity - Well we didn't put our humidity gauge in the right spot but it's about 60-70 maybe. He gets hand misted twice a day and an electronic mister comes on also while we are at work. he also has a dripped running.

Plants - We have fake plants round the edge for security plus a ficus, a bromeliad that the dripper drips onto and we just took out a devils ivy for now for more space but will put it back in his big boy house.

Placement - Our apartment is pretty quite so there's not much traffic in general He's just in our living room.

I'll try and post some pics. His name is Dizzy. 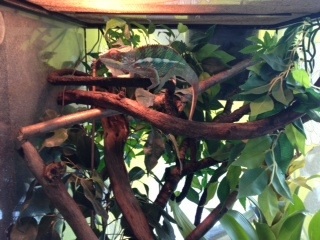 here he is sitting in his viv

It looks as if he needs more space so if you plan to get his new viv next week that's good. Have you been taking him outside at all? Popeye has been out a lot this last week or two and he is expecting to come out every time I pass his viv. I would keep an eye on him over the next week or so and if he doesn't eat he could be on hunger strike as they do this now and again. The last time Popeye did this I starved him for a week and he started eating again. I would weigh him weekly. They love to worry us.

My panther did the same thing about a month ago...he refused to eat and anytime we walked up to the cage to feed him, he would climb onto our hand. He would wait for us to come in the room and immediately start climbing the screen trying to get out. I started to worry about him. I made sure he was hydrated and started putting him out on our patio to get some sunlight. He started eating again and got better about not trying to get out of his cage. I can actually open the door and feed him before he tries coming out. I didn't change anything in his cage, so I wasn't sure why he was acting so strange. Guess he was bored in the cage.

Thanks for your replies. We'll upgrade his cage and keep an eye on him. Just wish we could ask him what's up and if there is anything we can do lol

I've been a little worried cause my cham has been eating less too lately and what you and KingJulian have said is exactly what I've been experiencing for the past 2 weeks or so. He's 6-7 months old and too busy trying to get out of the cage and definitely doesn't eat as much as he used to. "Oh you're bringing me a worm? That's nice, but I'm outa here" is basically his mentality. He lets crickets hang out with him now too. Hopefully it's just temporary. all of our lives would be a little easier if that was possible!

Zeke is doing the exact same thing! Must be the rebellious teens...

Site Sponsor
Lack of eating is not abnormal behavior, and I don't tend to worry about it until several days have passed and the feeders are untouched in the feeding cup.

The most common issue for me has been too low of a basking temperature caused by accidentally putting the wrong wattage bulb in, or the basking light burns out.

I have also seen my Chams get big enough that the basking area is now too close to the bulb, and I need to rearrange the basking branches.

When Pacsallywagz was around the same age, he reacted very similarly. Very ansie & restless, decreased appetite; moving him to his big boy set up changed all of that. He's probably crying out for more space please!
You must log in or register to reply here.