Hello all, I have been reading through the forum for the past 10 days or so since I acquired a new member in our household. Lots to read & learn - and I appreciate all the shared knowledge.

Not new to reptiles, and certainly wasn't looking to add one,
but stuff happens!

The blue jays were raising Cain in my backyard earlier this month, so I went out to check on what had their feathers ruffled; figuring it was just a black snake.

Instead, there was a pathetic looking creature I hadn't seen before.
Not looking like he would make it through the day, I brought him in - as I tend to do when I come across critters in distress. My wife LOVES it when I do this! (joking)

Anyway, I now have a veiled chameleon.
I WILL get around to pictures eventually.

Good sized lizard, although rather emaciated at the time.
But we are taking care of that with a quickness.

The day I rescued him, I went to PetCo and got a 20 gal aquarium w/ screen lid.
Had to put him in something ASAP.
Also picked up some super worms & crickets at the same time.
Have added more food types, but that's another story ...

Next day I went to a better pet store and they had Reptibreeze 18x18x36 screen enclosure in stock.
Got one & took the aquarium back!

A couple days later, I found the Reptibreeze 24x24x48 online at LLLreptile.com and called them last Monday.
They said they had "a bunch of them" in stock. Ordered one within 10 minutes.
After no shipping notification email by Thursday, call them to check on it.
Now I was told they were out of stock and mine didn't ship
- will have more in August! (NOT happy with them!)
*sigh*

Long story short, I found one about 50 miles away on Craigslist.
That will work! Road trip.
Looked at the Dragon Strand enclosures, but wanted all 4 sides screen.

I did order 2 sets of Dragon Ledges for the large cage and another set for the smaller 18x18 cage.
And a 24x24 drip pan thingy.

On that topic, the shipping for all that Dragon Strand stuff was over 80 bucks!
So I called. (it's what I do)
Talked with Bill and he said that he would look into the shipping.
Got an email today from him saying all that could be shipped together and that lowered the shipping cost by $40.
I appreciate his following through and highly recommend doing business with his company!

So, in all my rambling here, I do have a question.
I'm sure I will have more sooner than later!

Looking through the enclosure section of this forum, (why I posted this here)
I haven't seen anyone put a Dragon Ledge ON TOP of the cage.
Why not?? Am I missing something obvious?
Seems like it would make a useful attachment point to hang something (plant) from.

That's enough for now.
More later and I will put taking pictures of the new kid on my list of things to do.

Just to not leave with out something to look at,
(because I enjoy seeing pictures, so maybe others do as well?)
here is Mr. Ted - nicest lizard one could ever hope for.
Rescued him about 15 years ago.
He won the iguana lottery that day. 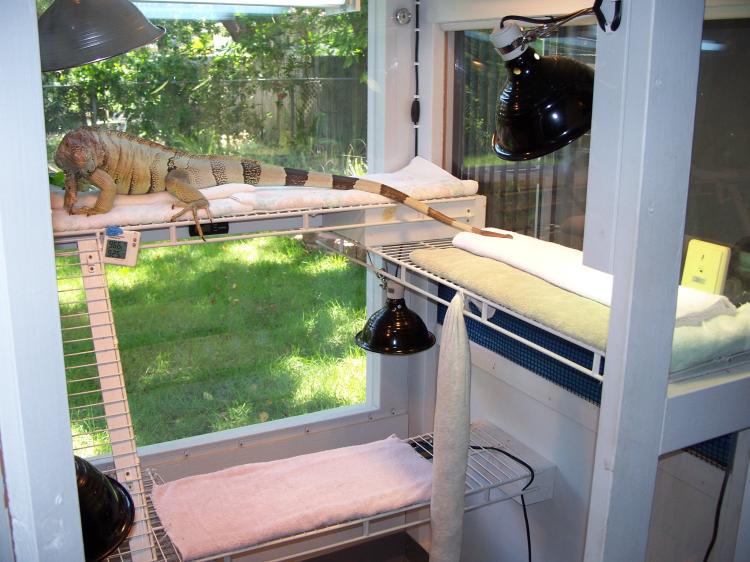 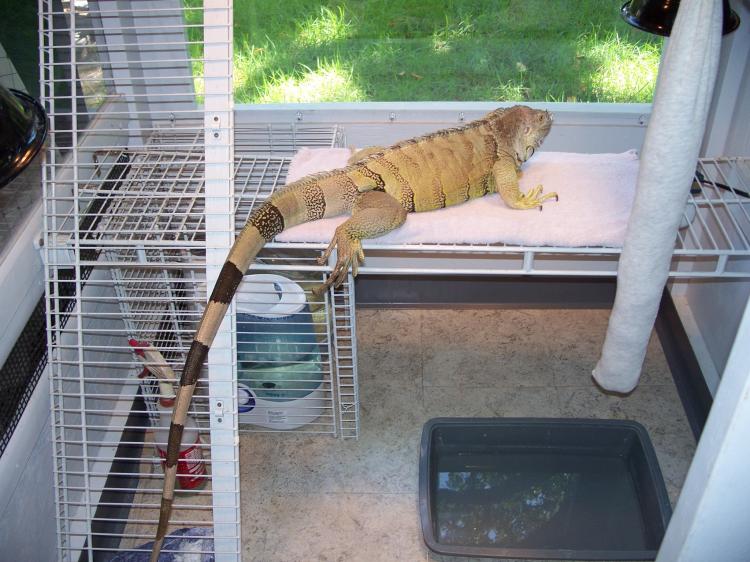 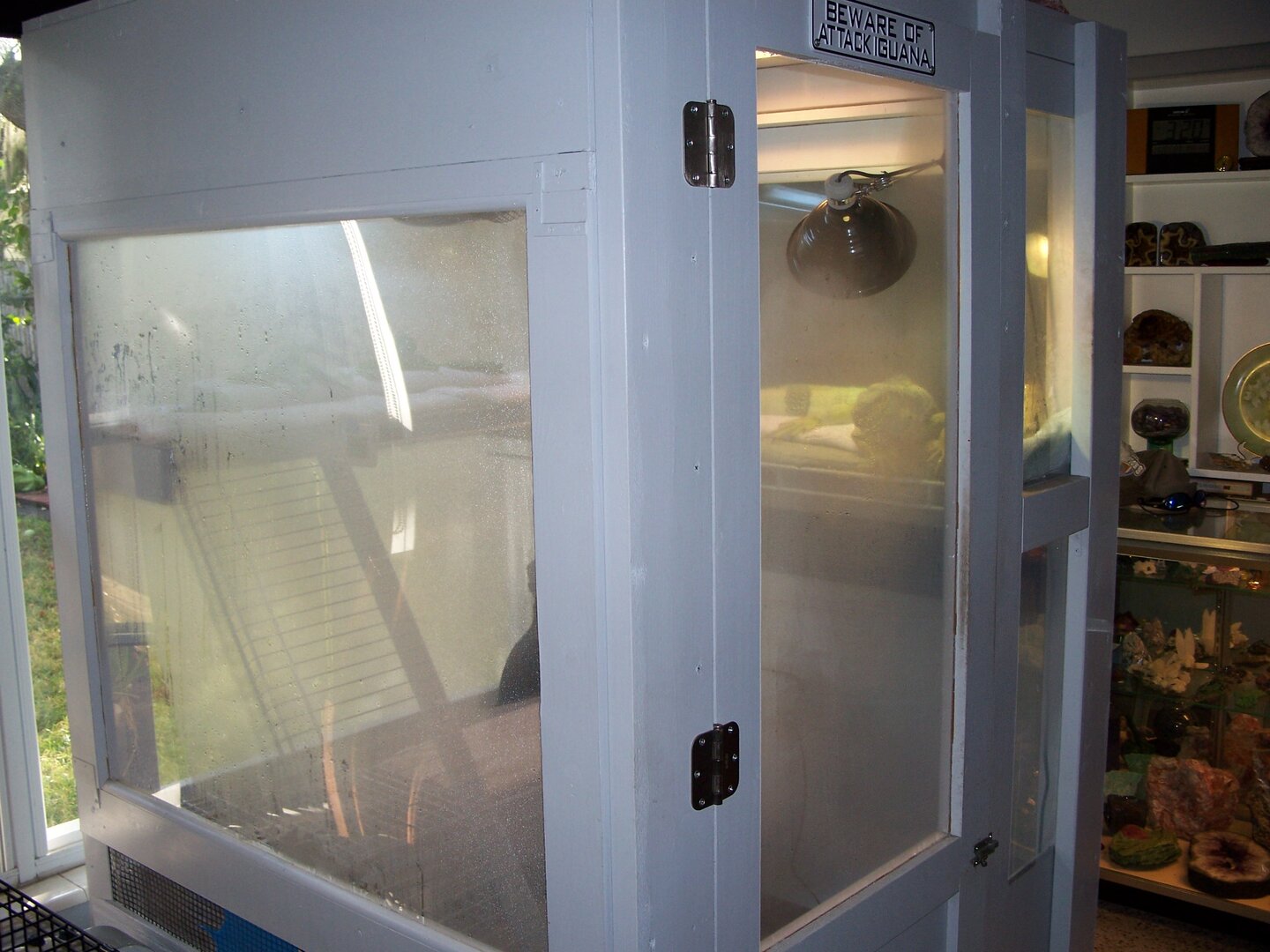 Thanks again for ALL the useful information here.

And to that young lady with Neptune - You sure helped me with chameleon information at the get go!
Thank you for all the schoolin' in your videos.

Hi there and welcome to the group. Where do you live that you would find a Veiled chameleon wondering about outside?

Oh... one other quick question.

Doesn't anyone use Mega Ray UV lights?
Pretty much the best UV light on the market.

Not good for chameleons for some reason?
I'm getting all the lighting etc worked out still for the new kid.
Using a Mega Ray for now.

Figure someone got tired of taking care of him and released him.
Same with Mr. Ted

Hi and welcome! There are wild colonies of veileds here in Florida, but more so around the more southern part of the state. Same with iguanas I believe. Maybe one of your neighbors is releasing their unwanted animals. Bad them - good you.
Mercury vapor bulbs aren’t recommended because you really need to have a solar meter to ensure you are getting the correct levels of uvb. Interesting idea about using a dragon ledge on the top. I personally would be concerned that my chams would climb whatever I attach to it and get too close to their lights.
Bill Strand has also created https://chameleonacademy.com/ which has lots of great information and you can access his pod casts from there.
Mr Ted is pretty cool looking. Will be looking forward to seeing pics of the chameleon. ?

So glad you found the videos on my channel helpful! Can't wait to see pics of your cham and setup!

Figure someone got tired of taking care of him and released him.
Same with Mr. Ted
Click to expand...

Welcome! We aren't too far from you, we're up in the Trinity / New Port Richie area.

I have another question, and instead of a new thread each time, figure here will do for now -

Does anyone use wooden bird cage ladders in their enclosure set up?
Any reason not to? Seems they would be pretty stable attached to a Dragon Ledge.
Could be used for up & down travel OR horizontally. 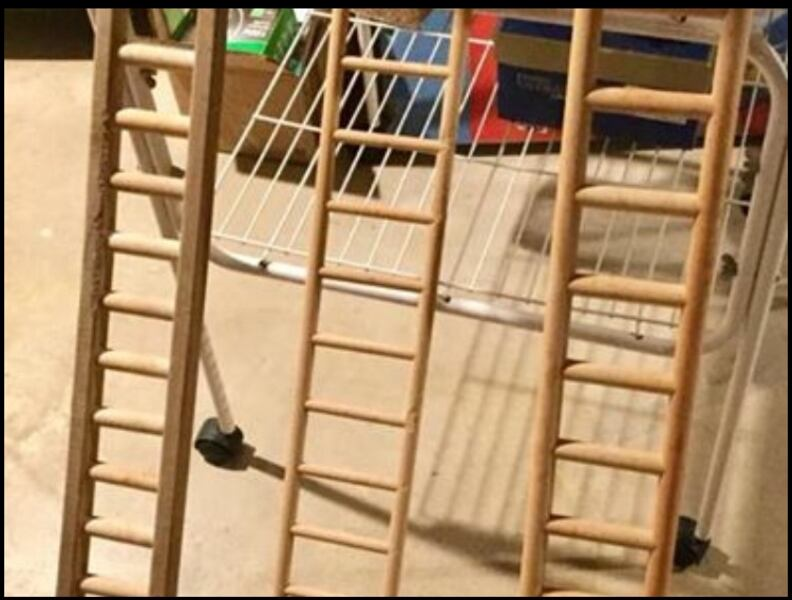 Bob-inStPete said:
I have another question, and instead of a new thread each time, figure here will do for now -

Does anyone use wooden bird cage ladders in their enclosure set up?
Any reason not to? Seems they would be pretty stable attached to a Dragon Ledge.
Could be used for up & down travel OR horizontally.

I personally don't, but I don't see why not! As long as you have different size branches in the enclosure so he can stretch his feet out completely.
You must log in or register to reply here.

3 Chameleon products that are worth your money [VIDEO]