I am very new to this forum, and also very new to owning a chameleon for the first time. I have experience with snakes and own two crested geckos that I've had for a few years, so I have reptile experience, and I also did a massive amount of research on Jackson chameleons before taking her in. Somebody was getting rid of a chameleon they didn't want for 50% and they looked miserable. I've always wanted a chameleon, but the poor thing was up for sale for so long (Which was why she was 50% off) I wanted to take care of her. She is a female Jackson chameleon!

I didn't get her age, but I think she's young because she's been brown-ish colors since I got her and she's not big enough to be considered an adult (probably a juvenile). I also got her while she was shedding and there is still some shed on her tail.

Since I got her about a day ago she's been VERY wary of me, like most chameleons, she's not very up for socialization, and does some very negative body language the few times I've tried to handle her (ex.neck turns red and puffs out, back arches, she tilts away, etc).

I KNOW HOW IRRESPONSIBLE THIS WAS, but when I purchased her I didn't have a tank set up for her. I have a spare glass terrarium, long, about 10 gallons (WHICH I KNOW IS INCREDIBLY SMALL), but it's on its side and the door is a full screen. It has plenty and PLENTY amounts of hanging plants and bend-a-branch vines for her to climb, hide, explore, and bask. I ordered a 110 gallon screen tank the second I bought her and will be arriving tomorrow.

She ate about 4 dubia roaches today because she didn't eat the hornworms I offered yesterday, so I gave her some extra, not knowing how long it had actually been since her last meal. She does eat from my hands without a worry, which may have been because she was very hungry, but I know that she doesn't refuse it.

The problem I'm having is that she has been sleeping! I know she is not supposed to do this, I'll be holding her and she will turn dark and close her eyes. When I noticed this I put her back immediately to let her calm down, and I noticed that her colors brightened back up to the cream-color they've been the last day I've had her (before when I bought her she was always pretty dark brown), but she had her eyes closed for a very long time before I had to shut her lights off for bed.

Being a first-time owner to these lovely beans, and also being very nervous about her safety, I would really love as much feedback as I can get. Should I take her to the vet? Should I wait for her new tank to come in and see if she's less stressed? I know moving can be stressful for any animal, especially ones that can be stressed so easily, but I still want to be absolutely sure she will be alright and I know some people on here have had years of experience. 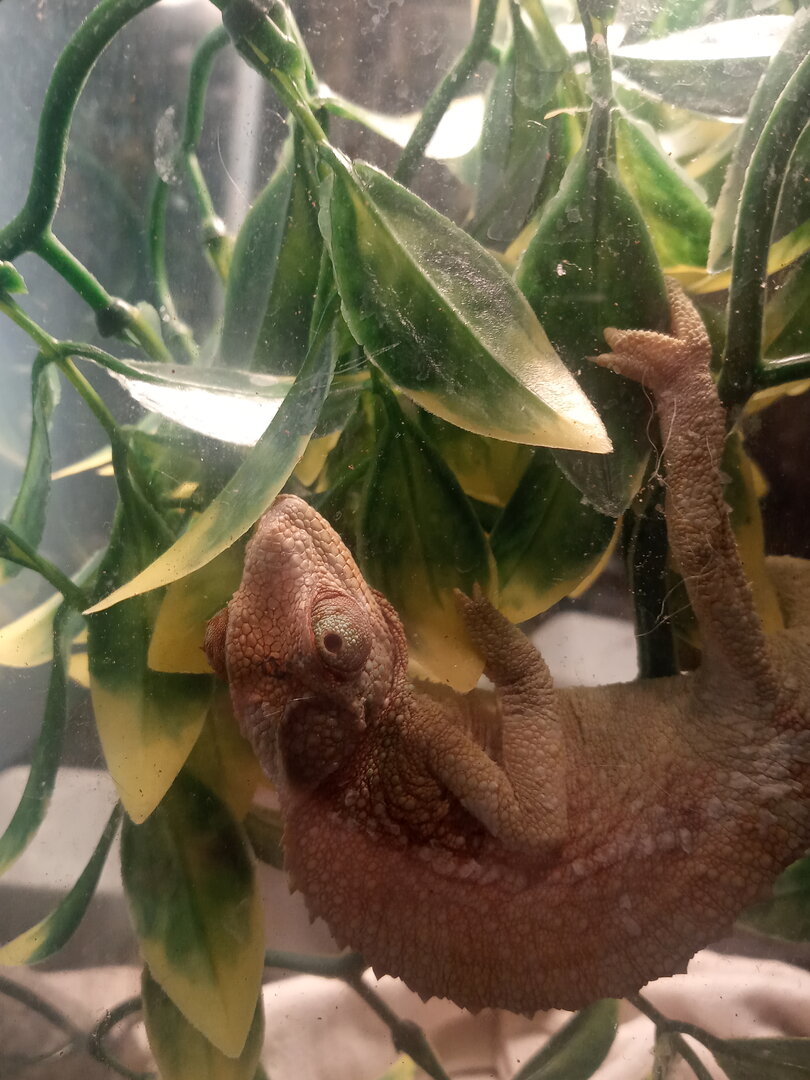 You will need to update her habitat ASAP. without lighting, supplementation your chamelon could get very sick. Signs of sleeping are not good signs unfortunately.

They can help you go over everything that needs to be changed.
F

I know sleeping is a bad sign and that's why I came here. She has proper lighting but her cage is very small right now. Like I said I've bought her a 119 gallon coming tomorrow <3
F

Fchamel said:
They can help you go over everything that needs to be changed.
Click to expand...

Chameleons need vertical enclosures. Either all screen or a mix of glass and screen. What lighting are you using?

Zoo Meds Basking Spot Lamp at the moment. I also made her temporary cage vertical and the one I have coming is 4 feet tall and 2 feet wide.

Frazy said:
Zoo Meds Basking Spot Lamp at the moment. I also made her temporary cage vertical and the one I have coming is 4 feet tall and 2 feet wide.
Click to expand...

You will need to add a UVB bulb. Chameleon need to have UVB to keep their bones and bodies healthy. Without one, they could develop MBD. You will need to get a Linear reptisun
t5 Ho 5.0
F

Thank you very much! And once I set up her new tank completely and this issue still occurs, should I take her to the vet?

Jacksons chamelons have different food, and supplement schedule's than I am familiar with, so the others can help with that. ???
F

Frazy said:
Thank you very much! And once I set up her new tank completely and this issue still occurs, should I take her to the vet?
Click to expand...

Yes, I would recommend that. Make sure your vet is knowledgeable about reptiles and chamelons.

AmandaS said:
Fyi, uv rays do not pass through glass.
Click to expand...

I didn't know that! The cage is all screen but thank you for telling!

Until @JacksJill or @Kaizen can help guide you, I suggest checking this out. https://chameleonacademy.com/the-jacksons-chameleon-trioceros-jacksonii/
C

You mentioned your Jackson's will turn very dark in color and close her eyes when you handle her, but that her coloration and behavior returns to normal once you put her back in her cage... this is likely a stress response. Chameleons are generally regarded as an observation pet, and not for handling (some don't even like being looked at). You also just got her within the last day or so, so she is likely getting used to her new environment as well. However, it's a good idea to let the experts chime in on this as well.

It looks like @MissSkittles already pointed you to the Jackson's page on Chameleon Academy... this is a very useful resource to help guide you through setting up her enclosure properly.

It might be a good idea to get your husbandry reviewed as well, as improper setup can also lead to stress & health problems in chams. You can include what the current setup is, as well as any planned changes, so you can make sure you're buying the right supplies:


Current Problem - The current problem you are concerned about.