My chameleon is always dark while basking

Whenever my female veiled chameleon is basking, she had a black-and-grey coloration. This is different from her stress coloration, which is a solid dark grey. From what I have observed on this forum, this is not normal. Is it because she is too cold?
Pictures: 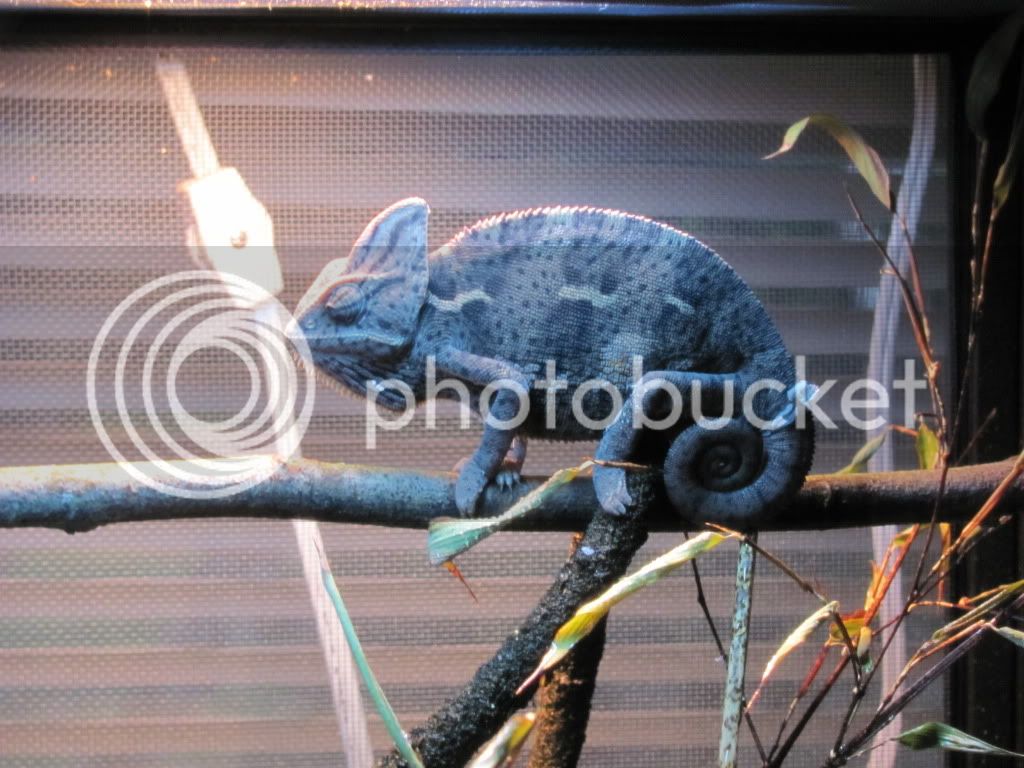 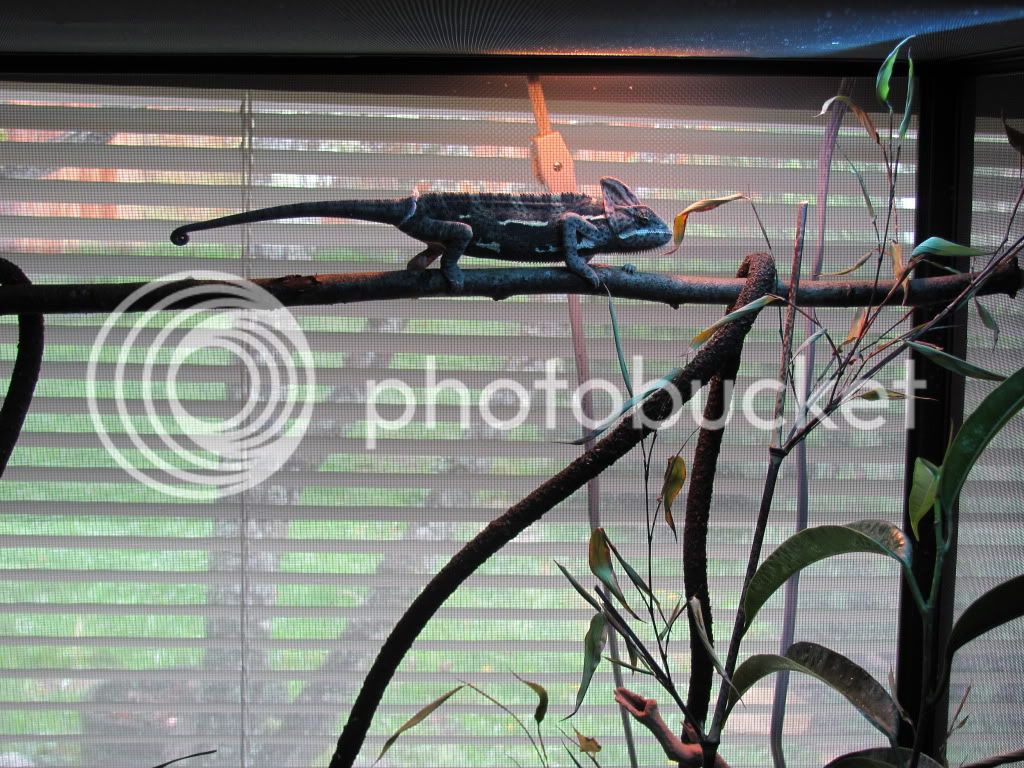 Info sheet: Female veiled chameleon, about seven months old. Owned her for two months. I handle her about one time every two weeks. I feed her six large crickets every day. I feed the crickets high-calcium cricket diet from Fluker's and fresh vegetables, usually snap peas. I dust them with Zoomed Repti Calcium without D3, and twice a month with Reptivite Vitamins with D3. I mist her two or three times a day with hot water (comes out lukewarm), and I have a cup of water with a hole in it that I fill up about once a day. I do see her drinking water from this. Fecal matter is dark brown, with a white urate. I have never tested her for parasites. She received a burn on her left side on the second day we got her, but the situation that caused this has been remedied- I moved the lamp.
Cage is about 24x24x36 inches, wire mesh. During the day, I use a 72W house lamp and a 15W UVB tube lamp (33% UVA, 10% UVB). At night it gets pretty cold, so I use a space heater to keep the temperature at about 60 degrees. I switch it to daytime lighting at around 8:00 AM, and switch it to nighttime lighting at around 8:00 PM. I am using two live ficus in my enclosure, as well as a climbing vine, a branch from a peach tree, a large piece of driftwood, and a piece of bamboo with numerous shoots. I keep the temperature in the enclosure between 70 and 85 degrees Fahrenheit, and I try and keep the humidity at around 60%. The temperature of her basking spot is in the low 80s. The table that the enclosure is resting on is about three feet off of the floor. I keep her enclosure in my room, and people do tend to walk around this room several times a day. This provides the advantage of being able to keep an eye on her throughout the day. Her enclosure is next to a window, so she gets plenty of natural light during the day in addition to her two normal lights. This window is always closed, but I keep the blinds open. The sun never shines directly through this window. I am located in Sonoma County in California. I live about an hour north of San Francisco.

I read that they will go darker when they want to absorb more heat. So maybe her basking spot isn't warm enough for her....

i have heard the same thing..basically think of it as wearing a black shirt on a hot day..attracts more heat. check the temp of your basking spot

How hot is her basking temp?

Sorry for the delay, have an analog thermometer. Her basking spot, which is 4" from the 72W bulb, is at 85 Fahrenheit.

That's alittle warm for a female. I keep my girls at 80 to 82 for basking. You need to get a better way to check her temps.

If it's too warm, then why would she be dark?

Never trust an analog thermometer to measure a basking spot.

Could just be trying to absorb more heat. I also noticed the window in back ground, windows can be drafty and this might not be helping. Where do you live is it cold out side where you live right now

Hugh, it is cold outside, but I never have that window open. I just leave the blinds open so she gets some ambient light.
J

she looks ghostly in the first pic. Not really dark just colorless.

Because analog types are cheap mass produced things often poorly calibrated , take my word for it. Buy a good digital thermometer or temperature gun and check again, you'll find you get different readings.
85f is not too hot per say, this is based on folks desire to limit a females ability to thermoregulate naturally and suppress its metabolism so it eats less and produces smaller clutches, since developement of eggs produces a huge drain on the females and can deplete calcium density of bones by leaching from them to supply demand for egg calcification and so on.

Common sense suggest finding a happy medium between allowing the lizard to thermoregulate sufficiently to maintain health, yet limiting it to some degree
to ensure smaller clutches and in the longterm, expanding its captive longevity. Cooler temps alone will not acheive this, regulating a healthy varied diet and monitoring weight gain, yet allowing sufficient heat to maintain bodily functions is required, a balance.

Provide your lizard gains weight steadily and slowly so that growth does not overtake bone developement, and given the best possible thermal gradient you can create in its environment, id say 85f, even 90f max (basking temp) is fine.
No lizard bask constantly, nor is its body temp always as high or higher than ambient max, but it needs to be able to do this.

Again, consistantly darker color says your lizard is not acheiving desired body temp, wether that be due insufficient heat, or avoidance of the basking spot I can't say. Accurate monitoring of temperatures in any artificial environment is crucial to a reptiles wellbeing.

NOTE: Thermal gradient refers to the variance between the coolest and hottest possible temperatures a lizard can experience in a given environment. This includes basking temperature. Guideline temps for a given species are merely a small range of temps in which that species can function sufficiently,a 'safe' range. These do not reflect the thermal variance avail to the species in nature, hence providing a basking temp higher than guidelines (aka ambient max air temp) will allow your lizard to thermoregulate naturally as nature intends.
The LOWEST temp of your gradient should prefrably be BELOW the guideline range, and likewise, The HIGHEST (basking temp) temp of your gradient should be somewhere above it.

Sufficient thermal gradient can be difficult to acheive for chameleons, particularly due various cage types. All screen or similar, tend to leave the animal at the mercy of ambient room temp due to air flow/stabilisation.
since the only heat source is generally above the the cage and heat rises,
there wont be much 'gradient beyond 12" or so from the top.
I suggest arranging a series of perches in that top 12" where possible, at different levels, both vertically and horizontally to allow atleast some choice for the lizard. Again, here a an accurate and reliable thermometer is your freind. Your lizard is a fine tuned instrument when it comes to thermoregulating, it can detect incredibly small incremental thermal changes, but it relies on thermal variance to function succesfully.

Thanks for the advice, I appreciate the thoroughness!
In addition to a number of vines and sticks aroudn her basking spot, I also have a vertical piece of bamboo beneath the light, so she can locate herself somewhere on there to achieve the right temperature.
K

I don't keep a chameleon cage near a window. Even though the window is shut there can be cold air coming from it at night...and it can lead to fungal infections or RI's.

Do you have a place for her to dig in the cage in case she needs to lay eggs?

I do have a place for her to dig.
I am fairly confused right now. One person says her spot is too hot, another says it is pretty much perfect. Also, I have noticed her yawning a fair amount recently, which from what I've read indicates that she is too hot. Could it just be that it is just natural for this particular chameleon to have no appreciable color when she is basking?

Yawning or gaping (holding the mouth open) can indicate the animal is attempting to cool down, this occurs via evaporation, however lizards will do this while basking, so it dosent nessesarily indicate the heatsource is too hot.
There can be other reasons for the same behaviour, namely RI (respiratory Infection), but other symptoms are usually present, such as excessive saliva/mucous, bubbles from mouth or nose, audible wheezy breathing and sometimes excessive basking.

Again, please see my last post (bolded content) re thermal gradient. Did you understand that?
What temp is the bottom of the cage?
Maybe your ambient temperatures are too high,(hence the gaping) how are you acheiving that? Is this due to room heating?
Thermoregulation works both ways, your liz needs to cool down aswell, this will be tough to do if the entire cage has an equal ambient temp of 70-85, that is not a gradient.

Paler color generally means either the lizard is warm enough, or not warm enough (confusing huh ) REcheck your temps with a good digital thermometer (with new batteries) then check again anyway.
Provided the lizard can move from the heat there shouldnt be a problem.

Note: It may help to move the heat source to one side of the cage also, this will allow your lizard to remain in a position of safety (highest point in the cage) without being directly under the heat.
What color is the lizard outside in the sun? You are aware females are much less colorful than males and only show colors when sexually mature/receptive/non receptive/gravid?
Last edited: Mar 9, 2011

Sorry, should've clarified: the temperature doesn't vary from 70 to 85- there is a temperature gradient from 85 to 70. Thanks for the information regarding pale coloring- you may be on to something. I have seen her try and crawl up to the cage's ceiling a few times. And yes, the light is not in the center but on the side. I will purchase a digital thermometer as soon as possible.

hey my male veiled went threw a spell like this where he was going very dark while basking, i don't know for sure if this is the reason why, but as soon i i changed my old bulb to a new one he stopped changing that color, the bulb as maybe 4 months old so i don't know, but as soon as i replaced it he went back to normal colors
You must log in or register to reply here.

1y/o female panther, new addition to my reptile family: Could use some pointers!

A
Color change- is this normal?