Ideas as to how this chameleon died? **(WARNING: dead chameleon images inside)**

Hey all, so yesterday a friend of mine who is in my same doctoral program as me came back from a 2 week trip to South Korea to find his probably 8-ish month old chameleon from FLChams dead. He got this, his first chameleon, a handful of months back, after I helped show him the ropes of cham husbandry and proper vivarium setup. His room mates were charged with his care in his absence, so I have no idea the quality of care he received during this time.

His room mates had expressed worry about a week or so ago, but later said the cham seemed to be doing better, eating, and moving a lot. Sadly, I received the following images yesterday afternoon and he asked me if I may have any ideas from outward appearance as to what could have happened.

Of course, I told him the only way to know for sure is to get a necropsy done, but I know he's very broken up about this and I wonder if anyone can identify physical symptoms which I could not. I realize this isn't the easiest thing to do. The cham's joints look swollen and the legs have some unusual bumps, so I wonder if there was a fall or MBD involved.

I also have a couple vids from a few months back when the cham was having some trouble balancing/using his legs (I can add these if anyone would like to see). I never actually met the chameleon in person, but was told that the balancing trouble seemed to correct itself. Sorry for the graphic images, but any suggestions at all would be helpful while he gets the necropsy under way. Thanks everyone! 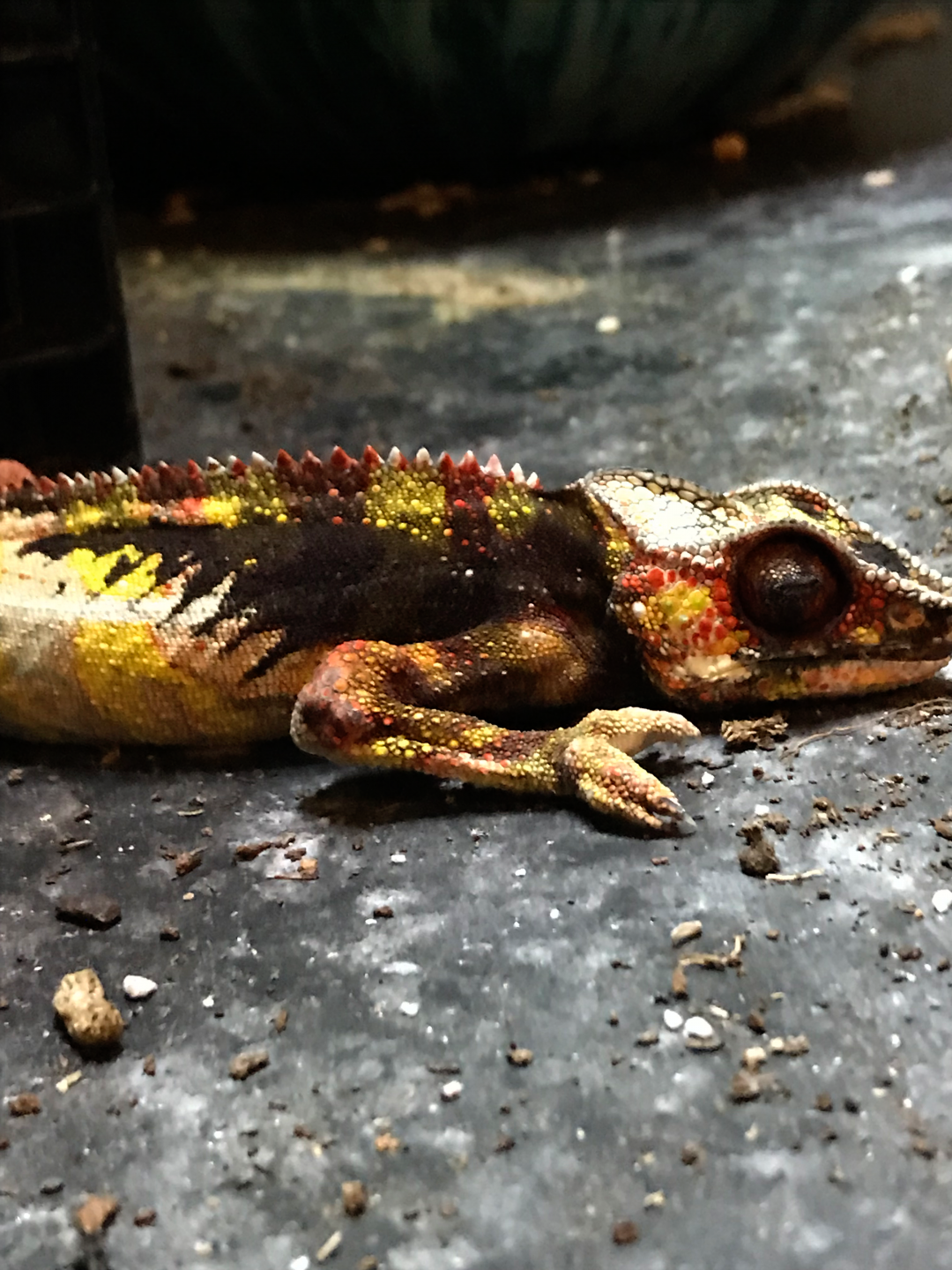 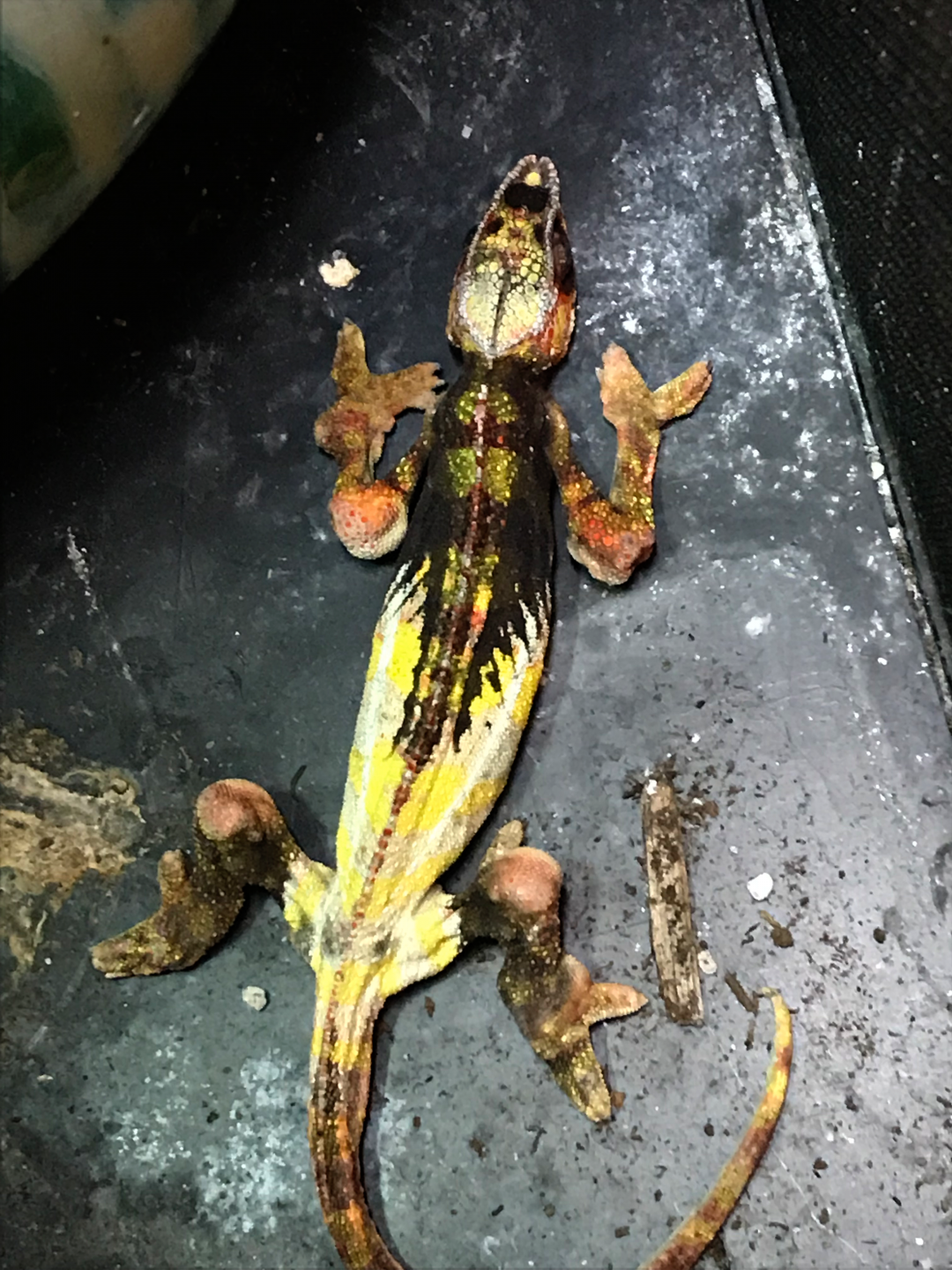 That poor chameleon. Its obviously hard or impossible to say whats he died from. A pic of his enclosure would help shed some light. The other problem is if his roommates are being honest about how they took care of him. If they did what they were supposed to it would of happened.
In my opinion it looks like he was burnt. Left out or escaped and crawled under the lights, possibly. I'd say bring him to the vet and find out.

The cells in the body that control the pigment lose control after the animal dies and will turn into odd patterns and colors. It doesn't really provide effidence.

Indeed his joints are swollen and I think he looks a bit skinny and his eyes look sunken but this may all just be because the animal is deceased.

Sorry, I didnt offer any help but I doubt anybody here can give a clear reason... Necropsy would indeed have been the only way to tell for sure.

No worries, and I appreciate all your comments! That's about all I could come up with as well. It's just so hard to make any conclusions after they die, since their bodies just undergo natural changes due to the process of death (sunken eyes, black skin, etc).

I'm pretty suspicious about how well the room mates care for him, too, to be honest. I don't know them well, but it just seems like there either was (a) some serious negligence involved, or (b) that there was already an underlying problem bubbling up from below.

Syreptyon said:
(b) that there was already an underlying problem bubbling up from below.
Click to expand...

This is what I believe, especially with the previous history that you mentioned. For someone who does not know the signs of decaying health in a chameleon it can be difficult to know what is actually going on until it is too late.
You must log in or register to reply here.

chameleon not using back legs

My chameleon is wobbly and falling