Help, I know the urate is quite yellow, he has been drinking but it would seem no where near enough. I've been misting regularly, I will start using a pipette to drop water on his nose soon for him to drink it that way -any other tips will be very much appreciated
However I'm more concerne about how his 'poo' part of the droppings are becoming softer , unlike normal where he has one fecal dropping and one urate there are also multiple fecal droppings
I'm seriously worried and would like any opinions you can give

First time owner, Cham is aprox 3 months old - 6 inches long
Temp is ambient 75 degrees
Humidity will be around 60% after spray
Cage is exo terra glass small tall
Any other info required I will happily give

You should fill out the how to ask for help form in the health clinic, so we can have much more detailed info about your cham and enclosure
view our sponsors
V

agreed, fill out these questions - https://www.chameleonforums.com/how-ask-help-66/

Your chameleon: vieled chameleon, male, aprox 3 months old (6 inches long) and had him for about a week now
Handling: once every other day only for less than a minute
Feeding: small hoppers and brown crickets , around 5 in the morning around 9 o clock and then 10-15 at 7. Gut loaded with carrots presently but plan to use peppers and other vegetables and fruit as well
Supplements: exo terra multi vitamin once or twice a month and unfortunately the shop we purchased him from initially said this was all we needed I am however now looking to purchase calcium supplement without d3 tomorrow to use every / every other feed.
Watering: I will mist manually during the morning, the again throughout the day a few times on the fake plants to give him- not constant but periodic- water droplets in which to drink from. I have seen him drink but never from the plants he drink ince ir twice from the shallow dish I sometime put vegetation in which gathers water (I clean it out daily with a scrub) and a few time from the side of the viv but other than that I haven't
Fecal desc. - his urates are quite yellow as can be seen and I'm trying to get him to drink more , they seem to contain more white on the end than precious dropping however the yellow is quite obvious. The 'poo' part of the dropping has recently become softer and more mucusy, and there were numerous fecal droppings to the singular urate. They weren't as compact as his previous droppings and this is my main cause for concen as I know why his urates are intact yellow but not why his droppings are this way therefore I cannot help him
The droppings were still dark, however they had a slight odour to them when squashed - which for two was easy and the others harder but still no problem.
He - as far as I know- has not been tested for parasites
History- having not owned him that long there is nothing of inportance I have noticed

Cage- he is currenty in a small tall glass exo terra (18"x18"x 24") with growth we are going to move him To a bigger viv either screen or wood
Lighting- the canopy lighting which comes with the exo terra viv, an extra bulb (green) basking bulb on a temperature sensor and a heat Matt in preparation for the winter (my house, in England, can get very cold in winter at night ) there is a normal strip light bulb and a strip uv
Temperature - during the day we maintain temperatures of 75 degrees and a basking spot of around 80 . Measured with exo tera stick on temperature gauge. And the basking measured by the temperature limiter it is connected to.
Humidity- 60% , measured by an exo terra gauge stuck inside the viv
Maintained by regular misting
Plants- we currently have no live plants however we are thinking of getting an umbrella plant
Placement - near a window but it is never open and the curtain blocks the view outside from the angle , the traffic is reasonable but only during mornings and dinner time . He is roughly 3.5 ft off the floor
Location: Milton Keynes, Buckinghamshire, England

Current problem: he is not drinking anywhere near as much as he should be as his urates are yellow , however his dropping are now softer and easy to 'squash' they appear to have a slight film to them and a slight odour when 'squished'

His current (today's) droppings are shown before
His set up 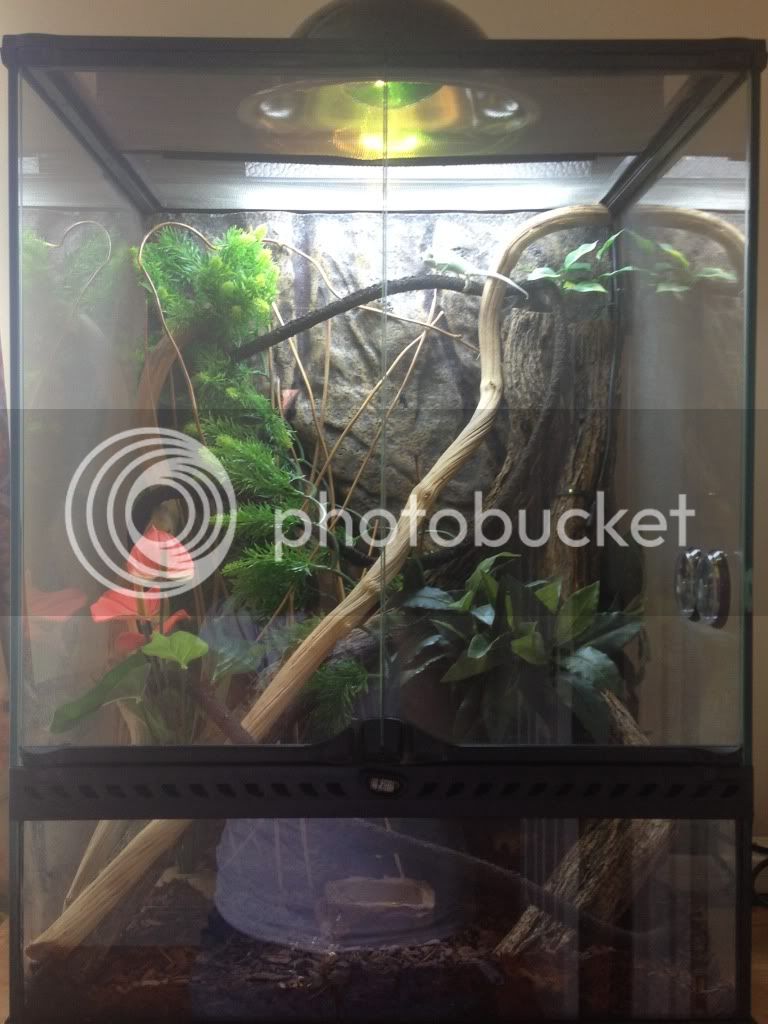 The couple things I would do is one, mist more often. That way maybe he can soak some up through his skin. Make sure that he gets wet as well. I can tell you that my little guy runs to get sprinkled on when my misting system turns on. He loves it!

As for feeding, it sounds like you are feeding him food way too late in the day. Chameleons need multiple hours to bask and let the food digest. You should not be feeding anywhere near bedtime.

I think that the misting will help with getting him more hydrated. I would suggest looking into an automated misting system like a Mist King or an Aquazamp. That will make it much easier for misting the cage throughout the day.

Thank you, since we started feeding him later his 'poos' have deemed softer, hopefully by just making it earlier it will help him digest them better and solve the issue of soft droppings
If it continues for a few more days ill be consulting some people who have helped me out before in a better and more knowledgable pet store
Thank you again
Hopefully this will be the only issue rather than something more serious

They are not as mucusy and soft (I 'squashed' the edge of one with a spoon to see if it smelt like the one from yesterday still but there was no odour this time)
The urate is also looking a lot whiter
You must log in or register to reply here.