Found this in the cage...what is it?

Your Chameleon - Simcoe! 9 month old male Jackson's Xanth (I think xanth, not 100%). He's been in my care since he was about a week old.
Handling - I'll handle him maybe once a week, often times much less often. With the nicer weather I've put him on a potted plant in the house and outside a few times.
Feeding - Lately mostly just crickets and superworms...my supply is a bit low. Recently Dubias, silkworms, hornworms, phoenix worms, blue bottle flies. I gutload the crickets with leafy greens I have available to me (lately dandelion leaves), some vegetables (carrots, sweet potato, broccoli), and some repashy bug burger.
Supplements - Zoo Med calcium without d3 once a week or so. With d3 about once a month.
Watering - I mist a minimum of 3 times a day for 2 minutes, 3 minutes and 2 minutes at 9, 1 and 5:30 with a Mist King using both a nozzle in the corner near the basking bulb and a home made "raindome." I do see him drinking regularly.
Fecal Description - Fecals appear normal...solid black/brown with white on the end. He doesn't appear to be dehydrated.
History - Nothing of note I can think of. I've had him since he was a week old.

Cage Info:
Cage Type - Reptibreeze screened 18x18x36 enclosure
Lighting - 40w basking bulb in one corner, 18" Reptisun 5.0 T8 Fluorescent bulb...due to be replaced at the end of this month (coming up on 6 months old)
Temperature - Basking spot tops out at around 84-85*. The rest of the enclosure sits around room temp, 70* or so during the day. Night time drops slightly, 65ish.
Humidity - My humidity guage is unreliable, I'd like to get a digital hygrometer but haven't gotten one yet.
Plants - 2 live plants...a schlefferla and a pothos.
Placement - The cage is in my living room. I lock the cats out of the room when I'm not home. It's relatively near windows, but the blinds are always down....no vents or fans nearby. The top of the cage is appx 6 feet off the ground.
Location - Southern Pennsylvania.

Current Problem - I found this hanging on a fake leaf near the front screen this morning before I left for work. It almost appeared to be a "mini urate" covered in some sort of clear gelatinous substance.

He's been a bit restless lately, screen climbing a bit more than normal. I have had him out onto his potted plant a few times and he seems to chill out while he's on it, so I'm not sure if this is the case. He does not appear to be showing stress colors, and does go up to bask regularly.

Here is the stuff I found on the screen (sorry for the bad cell phone pic). 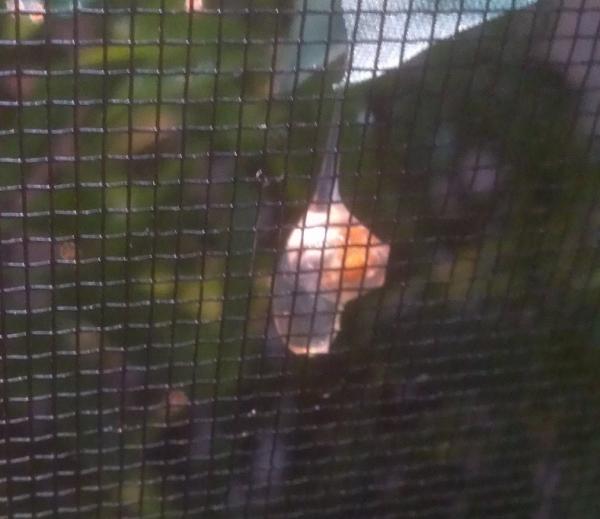 Any ideas? Could it be a sperm plug?

It might be a sperm plug, hard to tell from that picture, plus I am on my iPad . It doesn't look like a problem, but some close up pics would solve the mystery.

From image just looks like tail end of a bowel movement.

Thanks for the quick and reassuring replies! I unfortunately can't really take a better picture of it as it's dried up completely since this morning. I've never seen him making an, *ahem*, urate, so I wasn't sure if this jelly-like texture around it was normal or not.

My Jackson's urate is often covered with the 'egg white' consistency jelly too.
You must log in or register to reply here.

Why is my panther chameleon so small?