Chameleon Info: Your Chameleon - Male panther chameleon about a year and a half years old (dunno hatch date) and I've had him a year and 3 months.

Handling - I let him on his free range every day and only hold him to put him back.

Feeding - crickets, locusts, morio worms, calci worms, silk worms when I can get them. Also occasionally wax worms and dubia roaches. Unfortunately he has always been a rubbish eater and will often refuse food for days. I still offer something every other day. I gut load with bug burger & arcadia insect fuel. Plus fresh veg like carrots and spring greens for locusts.

Supplements - EArth pro calcium, repti cal with d3 & reptivite multivit. I use calcium with every feeding, apart from once a week where I use d3 or reptivite on rotation. When I feel like he really isnt eating I've used rapashy plus lod just to try and make sure he is getting enough supplementation.

Watering - I have a mist king that I'm currently changing the schedule for now. It will go off three times a day, once in the morning, after lunch and a few hours before his bed time. Just for a short period though. I also have a big dripper that I have set to drip onto a dripper plant I've dismantled and re-purposed. Every other day I get a litre of luke warm water and hand spray the cage as he loves it and will walk into the spray to clean his eyes and drink loads. I have also dabbled with an overnight humidifier and plan on trying again so I can reduce spraying during the day.

Fecal Description - Small brown droppings with off white urate. He has had parasites in the past, but was tested before I went away last month and was found to be clean.
History - I have had a lot of issues with his feet. I've asked for help here before about swollen toes from him damaging his nails on the screen cage. I've taken him to the vets about them multiple times too and all I've been given so far was some anti-inflammatory that didn't do anything. They believe the swelling is due to the way the nail is growing and irritating the toes. It never seemed to cause him any pain or limit his movements prior to now.

He has been with a sitter for a month while I've been away so I have limited knowledge of recent history. She has her own chameleon and looks after lots of reptiles so I'm sure he received even better care with her than with me.

Cage Info:
Cage Type - xl reptibreeze
Lighting - arcadia t5 linear uvb 6%, jungle dawn plant spot light , 80w wide basking lamp controlled by thermometer at basking site. The lights are on 6am and off by 6pm. Temperature - 32C at basking site and 19 at the bottom. Its hard to keep it warm at the bottom so I have a mini radiator to use outside the cage too but I don't like using it much. I use a digital thermometer that measures both and also a microclimate thermometer/controller for the basking site. Lowest overnight I've measured is 15C.

Humidity - one thermometer also measures humidity and I have another separate one at a different spot. The humidity was around 50-60% in summer, but is now 80-90% and so I am currently tweaking my hydration to lower it. Plants - I have two pothos plants that have taken over most of the cage , a bromeliad, small ficus, a fake vine plant in one corner and a disconnected dripper plant in the other.

Placement - His cage is in the corner of my living room but only I live in the house and I'm out most of the time during the day. No fans or air vents. The top is about 6foot from the floor.
Location - North east england.

Current Problem - Like I put earlier. He has had a lot of problems with his feet I have taken to the vets for but with no joy. Unfortunately when I've tried to change vets I have been directed back to the one I'm already at , so I'm at a loss. I had an appointment with them to see him again this morning ,but they gave me the wrong branch and now I'm unable to take him until Friday.

I went away for a month and left him with a sitter that looks after reptiles. Before I went I noticed he had a black dot on his right foot. It didn't appear to bother him and the vet didn't think it was anything. So assuming it was a bruise ,I told my sitter to keep an eye on it and left. Now it has gotten worse on that foot and he definitely is hesitating to use it. He will only grasp lightly and even lets it hang down sometimes when he's still. There are also dots on one front foot now. He is still very active but clumsier.

I'm thinking fungal infection maybe? I had wood in his cage but it was for a desert viv and went moldy, so most vines that he sits on are fake so wont wick away water? Its why I'm trying to reduce humidity/ water levels. Can't remember what the vines in the sitters cage were like but I think the same. Its more the middle of his feet than his toes so I dunno if they are related?

Any cleaning solution I can try in the meantime? The lighting in these pictures make his feet seem worse but I've also sent them to the vets and asked for an opinion before friday.

Thanks for the help 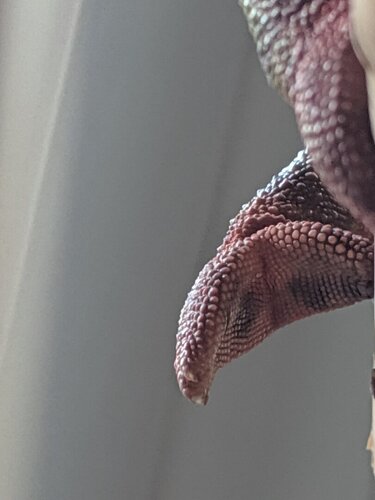 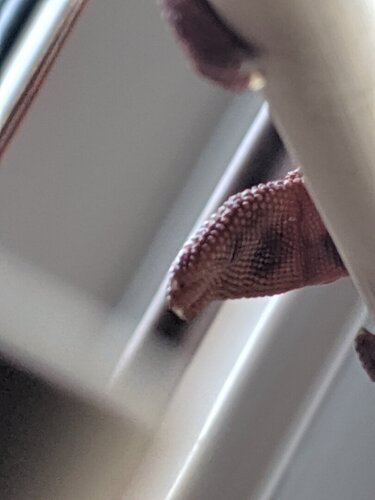 I would hit up some parsons keepers for some advice. Those tree elephants are known for foot issues, and they should have a recomended med list.

I can’t really see much from the photos. My only advice here is to figure out why he’s climbing the screen. In my limited experience, my guys don’t usually use the cage walls for climbing, and in the past, when they have, it was because some parameter of the cage setup was out of whack.

Also, thank you for filling out the form!

Hey
Thanks for reading. I have to run soon, but will try and get some better pictures either when I get back or if he's sloped off to bed by then, tomorrow. Its only the underside of his foot though so it can be tricky, Basically they look like spots of black mold. Also he doesn't climb the cage anymore thankfully. It was when I first got him ad he went into his teenage phase and roamed the cage relentlessly. I got him a free range to explore when I'm in the house and since then I've not had issues but the damage to his nails was done.

I'm starting to wonder if it could be pododermatitus. It is patchy like this but has always looked black rather than red. 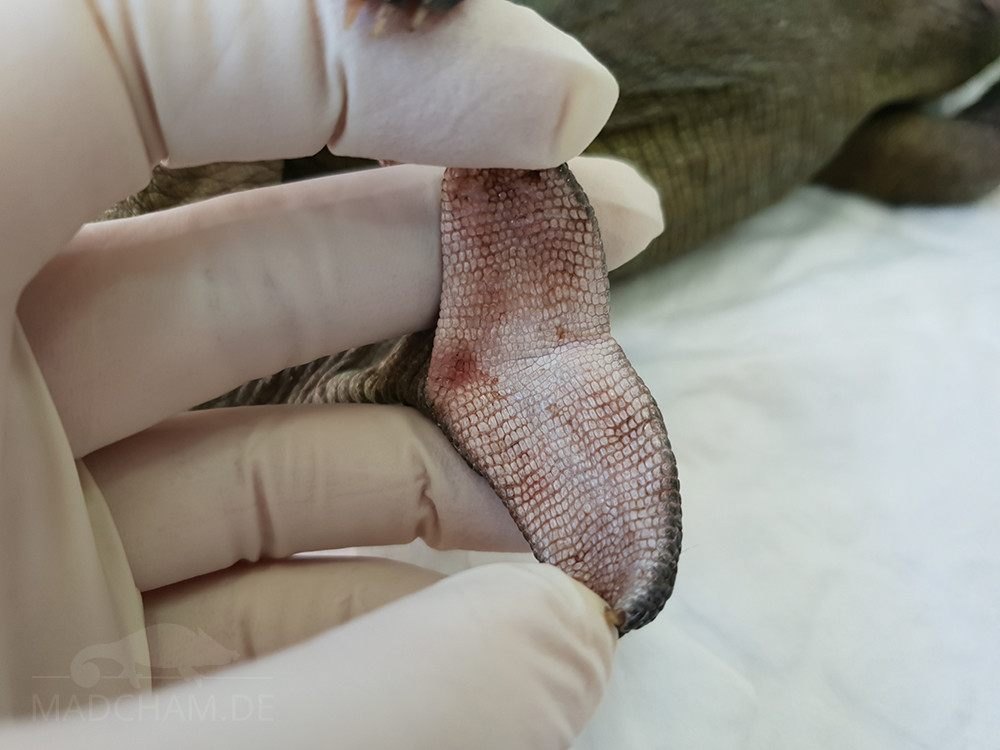 R
Is my veiled getting sick?

Husbandry Review for Young Veiled Chameleon that is Gaping