Hi! I want to get some variety into Minty’s diet, he is 2-3 months, and I tried some superworms and waxworms and he just ignores them, I tried putting them in a feeding cup near his basking spot and he just looks at the worms. He loves crickets but after doing some research I think crickets might not be the best option due their high phosphorus and that’s why I was trying to add some more insects to his diet. Should I keep putting worms in a feeding cup every day and he will eventually eat them?? I’m sure he had only one worm a few days after I got him, maybe he didn’t like Superworms?

I have one cham that won't eat worms

Jpeff said:
Try bsfl they cheap and most chameleon like them or the flies they turn into
Click to expand...

I bought some! Including some hornworms and dubia roaches! I bought small quantities because I want to make sure my chameleon will eat them

Most insects have a bad phosphorus to calcium ration. Which is why we use supplements to balance that out. Crickets are a perfectly healthy feeder as long as your using the correct supplements.

Young chams rarely will touch new feeders. They are not used to seeing them so they do not identify them as food. We work them into eating a variety by mixing in the new insects with the ones they already know. Ensuring that they are the correct size for the cham. If young then they have to be very small insects.

I agree with Beman. The superworms and roaches just may be to big for him at this point.

Dubias come in all sizes, as do most other feeders. 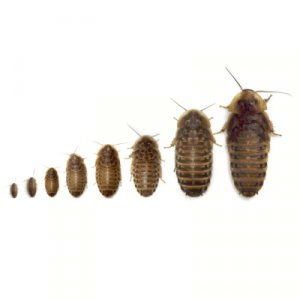 At 3 months, OMG wouldn't take superworms, but he would (and still does) take mealworms as part of his variety.

IME, with some (most?) chameleons (they're all different), whatever feeders you try have to be moving/wiggling. This can be a problem with roaches, as they're nocturnal and photophobic, and hence tend to cluster and remain motionless (defense mechanism).

OMG will ignore roaches if they're the only feeder in the cup, but put another type or 2 of feeder, and the roaches will move more, and he'll eat some of each.
You must log in or register to reply here.

Espio Wil Not Eat Crickets or Locusts, is this problem long term?

M
I now know the answer to, 'Do chameleon bites hurt?'