I wanted to do a poll but I didn't see an option for running one. How many of y'all use either fake or real, and how many mix the two?

I use mostly live plants, but utilize benda-branches and some silk ivy for filling in spaces and background.

Brad is it OK to use bromeliads? I found some failrly low light ones and they are beautiful.

Yeah, those are safe.
Not a lot of people use them because as a functional plant (ie: cham can climb or perch on) they're no good, but in my opinion they are a great aesthetic addition for the lower part of an enclosure or if you get the kind that grow on trees like some orchids do that could be cool too.

I go out in our woods and find nice large branches,(clean them well!!) and then attach a bunch of draping silk flowers with a green floral wire. It looks really nice. Very jungle! I wash everything of course and let the silks air outside for a week or so to off-gas the plastic. The great thing about this is they don't drop leaves and you don't have to worry about them dying or watering them. For a watering system I use those little fountains with water cascading down (from Bed,Bath and Beyond about $25.00 a piece) and the chams all LOVE them. It sounds nice and they seem to love the flowing water. And you only have to fill it once a week!!! All the lights and water fountains are on times of couse! Works great!

i use mostly real plants, and some fake hanging ficus branches from foster and smith.

I stick to mainly live plants but have some fake vines in there. I stink to pothos and ficus and snake plants.

dkollaritsch said:
For a watering system I use those little fountains with water cascading down (from Bed,Bath and Beyond about $25.00 a piece) and the chams all LOVE them. It sounds nice and they seem to love the flowing water. And you only have to fill it once a week!!! All the lights and water fountains are on times of couse! Works great!
Click to expand...


Fountains also grow bacteria, drown feeders, and serve as toilets for many chameleon species. I hate to be critical, but only filling them once a week? Do they ever get cleaned? Sounds like illness just waiting to happen.

On the discussion of plants.. I use live except for with neonates. Then, I use a combination of live and fake. I like to clean neonate enclosures every other day or so, and fake vines are quite handy for that schedule. I have enough on hand that I can stick the dirty ones in the dishwasher and put clean ones in the enclosures.

Heika,
Thank you for addressing the fountain issue.
I was going to earlier but felt to tired.....
I have responded to this issue so many times recently.
The fountains need to be removed.

Well, I have been using the fountains for almost 2 years now and no problems yet. I wash and disinfect them every 3-4 days and fill with fresh RO water(not water from the tap). This helps cut down on any bacteria. (I hope no one is using water from the tap to give to their chams anyways).... You can buy the same type fountain through many reptile stores on the web, which I also have 3 of those.

I would be interested to know how long it takes you to properly clean all those fountains
I find water from the tap to be absolutely fine, I don't even treat our water here before putting fish in it.
Unless you're in an area with some extreme water problem or live in a home with really rusty pipes the rule about treating water before using it for animals is kind of old school.
Do you give your chameleon showers?
How do you treat the water coming out of the shower before it hits the chameleon?

THMs and Chlorine- municipal water systems use chlorine to eliminate bacteria, but recent studies show that chlorine can react with organic material in water to form chemicals called Trihalomethanes (THMs). One of these THMs is chloroform, a suspected cancer-causing agent.

Radon- this is a naturally occurring radioactive gas that has no taste, odor, or color. Waterborne radon released into the air from showers, washing machines, etc. Can be inhaled and increase the risk of lung cancer. There also is accumulating evidence of a relationship between the ingestion of radon in drinking water and increased risk of stomach cancer.

Cysts-Protozoan parasites, such as Cryptosporidium oocysts and Giardia lamblia cysts in drinking water, can cause vomiting, diarrhea, an other flulike symptoms that are longer-lasting and more debilitating than most cases of flu.

Pesticides and Herbicides-Many agricultural chemicals like atrazine and alachlor have found their way into groundwater sources. Many pesticides are toxic and are associated with a variety of health problems.

Industrial Chemicals-Though necessary in manufacturing, many industrial chemicals, if ingested, may cause increased risk of cancer and others illnesses. Some of the industrial chemicals that now threaten the purity and safeness of our drinking water include polychlorinated biphenyls (PCBs), polynuclear aromatics (PNAs), and volatile organic chemicals (VOCs), such as TCE, benzene, and carbon tetrachloride.

Other Particulate Contaminants- Small fibers of asbestos, dirt, and other particles are found in drinking water.

Now this I would be CONCERNED about.
Our WHOLE house is filtered and the water from the kitchen is reverse osmosis...this is what I use to water and mist my chams.

My cages are quite large and have not had much of a problem with feeders drowning or feces in the water...

I know that was a mouthful, but I am really cautious about my health and my lizards.
Do you use a misting system and drip system?? What type?? Would like to know..I have never found any set up that was not messy or did not need to have the water piped in....Thanks!

As regards for water, i personally wouldn't want to use a fountain - they look and sound good but they're high maintanance for sanitising.
But i do use RO water, i use this for water changing my fish so have a constant supply.

I do use a drip system. The water is collected in a container in the bottom of the enclosure which is dumped every morning. The collection container has a screen over it to prevent any possible accidents.
The misting system is me and an air pressure tank with a misting wand. The misting happens at least three times a day.
I don't know where you live (glad to know you have a full house filtration system..that's great) but in Colorado we have few if any concerns with the quality of our water.

Brad i would like to se eyou mist system. do u have any pictures? 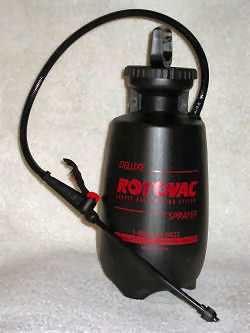 Thanks Will.
I know this probably seems labor intensive to those of you who have several enclosures or don't have the opportunity to do hand mistings through the day.
I just have Kitty and I work 2 blocks from our home so I mist in the morning, I walk home for lunch, mist again and walk the dogs. In the late afternoon I am done with work: mist / walk dogs. A lot of times I will mist an hour or so before lights out as well but that doesn't always happen.
I like using this mister, I water the plants with it and clean leaves and branches and I make sure Kitty gets really soaked at least once a day.

Even now, I enjoy hand misting. I have a few more chameleons than I used to, but it is relaxing and enjoyable to mist a happy chameleon. Especially my fat panther Spencer.. he REALLY likes to be sprayed hard by a pump sprayer. Wierd chameleon.. I think he thinks he is a dog.
You must log in or register to reply here.

I
Fake plants “panthers only “

Fake vines hammocks & ladders are not good to use bc they host bacteria but why don’t real wood branches & sticks host as much bacteria?