jamest0o0 said:
It's looking great! How did you handle drainage for the flower pots in the background? I know some people use straws.
Click to expand...


The flower pots themselves are made from coir so all I did was drill a small hole in the foam near the bottom of each pot after the job was done.

So my original plan was to post periodic updates showing the gradual progression of this enclosure but that all went out the window when my company decided to send me on 2 consecutive business trips abroad lasting about a month in total.

I had a helluva time teaching and convincing my wife to take care of and feed crickets to my chams/geckos for a month while I was gone in addition to other basic care/maintenance. Luckily all the animals were OK when I returned but several plants were dead from lack of watering. Even before my trip I knew this would be a problem as I did not have automatic misting set up in some of my gecko enclosures and lacked sufficient nozzles in the cham enclosure (only 2).

Since I had to spend 2 weeks in the U.S. I took the opportunity to order about 150 dollars worth of nozzles from MistKing so this problem would not recur during future business trips.

Anyway, here are some pics of the enclosure taken just a few days ago after I returned. You can see the 2 misting nozzles at the top which do not provide nearly enough coverage for the plants (particularly near the bottom on the background). 2 or 3 more nozzles will be added this weekend and I also plan to add several more plants along the background and also attached to some of the branches. 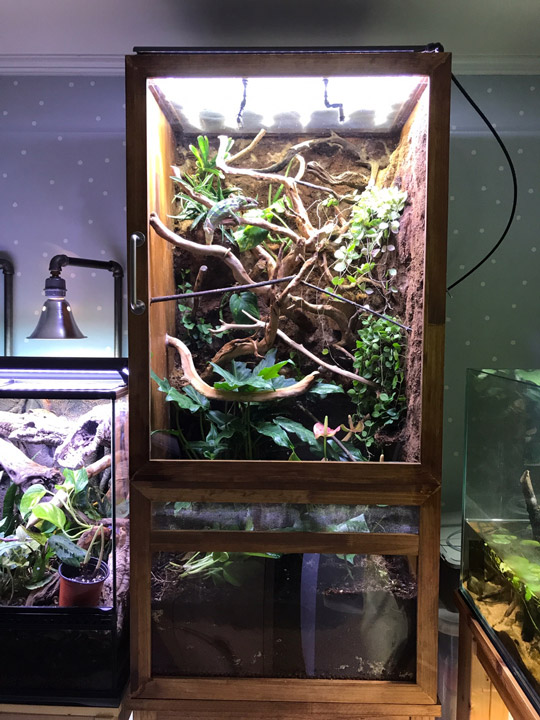 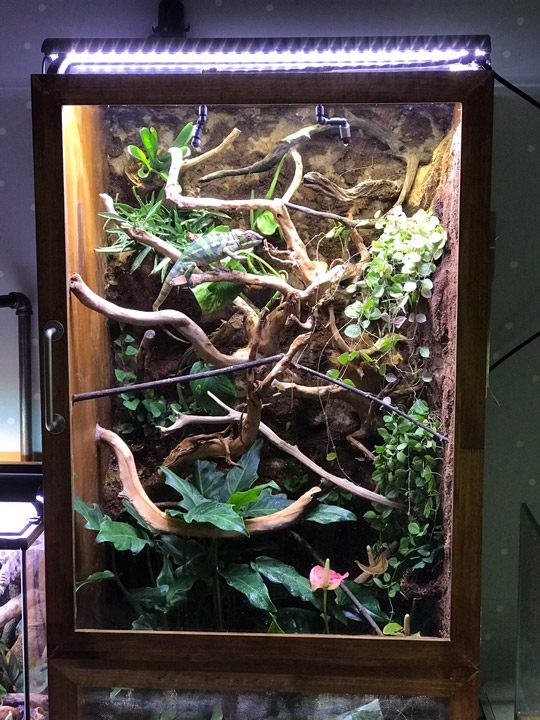 It's been a long while. Here are some updated photos of my enclosure: 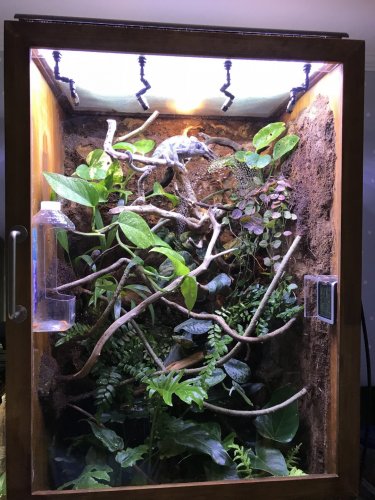 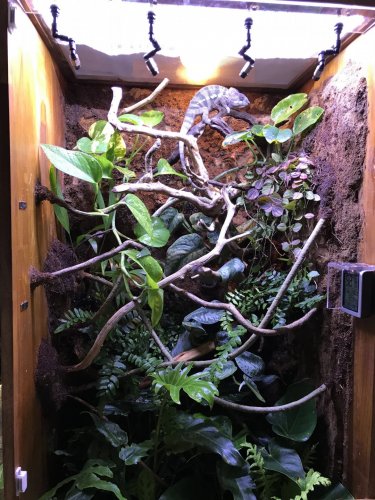 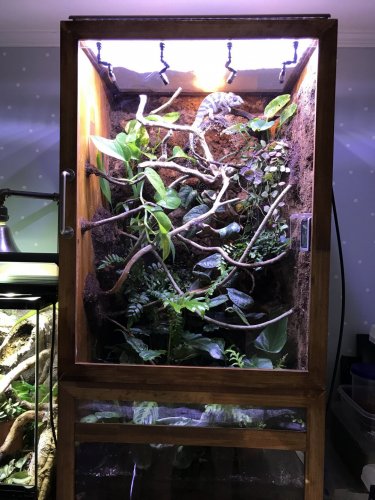 I made a number of changes to the enclosure from my last update based on my observations of the chameleon's behavior and also things I personally didn't like.

The first thing I noticed is that the chameleon rarely, if ever, climbed on the thickest pieces of driftwood. I also felt that there were not enough branches at different levels in the enclosure. So I removed the driftwood pieces and added several thinner branches and vines.

I added 2 more mistking nozzles to the top get better spray coverage. A few of the plants on the sides and along the bottom of the wall nearly died from dehydration. By contrast, the Seloum philodendron planted in the base on the enclosure grew like crazy and had to be pruned multiple times.

I also added more plants along the back and sides - mostly ferns and a Philodendron to provide more plant cover and the give the enclosure a more lush appearance.

Lastly, I added a cricket feeder and Accurite thermo/hygrometer to the inside of the tank both of which attach to the walls via neodymium magnets.

Thank you for the compliment

R
Is my upgraded lighting okay?
2