Hello! I work at a pet store, and a chameleon was surrendered to us. He was in really bad shape, you can tell he was given no calcium, probably no UVB, because his arma flail all weird like. His eyes wouldnt open properly, one of his nostrils were clogged, his eyes were closed and sunken in, and thats only the physical problems, did I mention he doesnt willingly eat ?
Now at my job, he wasn’t being taken care of well either because we are a all around pet store and not just a reptile store. One day when I came in he was literally collecting dust so I felt bad for him and I took him home.
In my care he was doing way better, he was shedding a little, I was misting him 2x a day, his eyes opened up, his nose unclogged, I did have to force feed him, I started with 2 crickets morning and night and i also have to drip water on his face for him to drink. He was progressing slowly and in the span of like 2 weeks I had him eating around 4 crickets morning and night.
So one morning I fed him and let him drink from a syringe and he spit up all the water but I let him be because I figured he just overloaded, later that night he threw up all of his food so I decided to drop back down to 2 crickets and he still does the same thing.. so hes not eating anymore.
I feel like hes circling the drain, is there any suggestions as to what I can feed in replacement or what other ways to help ??
I know they can get stressed out from force feeding but what other alternatives are there to it ? I researched and thats the option I found, but im open to anything. I wanna help him.

I live in south FL so if theres anyone that wants him or any places that are known to take in chameleons please let me know, im not selling him but ill give him away if theres anyone to give him better care than me im okay with that.
K

Can you post a photo or two of him please.

He doesn't look as bad as I though he might...he definitely needs some help though. I hope you find a place for him to go where he will be helped. The issue is what to do to help him in the mean time.

Since you over had him, have you been using supplements? Increasing calcium? What temperature is it in the basking area?
Has he been pooping? Color of urates?

@jannb ...do you know any rescues in Florida that can take him?

Yes, i’ve been using an electrolyte and vitamin d3 supplement. I dust his crickets with calcium most nights out of the week, basking spot is around 80-85 degrees, and yes he’s pooped very lightly about 3 times since i’ve had him, his urates are an orangeish color.

Staff member
Hun can you post a picture of the entire enclosure including lighting on top as well?

Is he able to grip branches and navigate his way around? 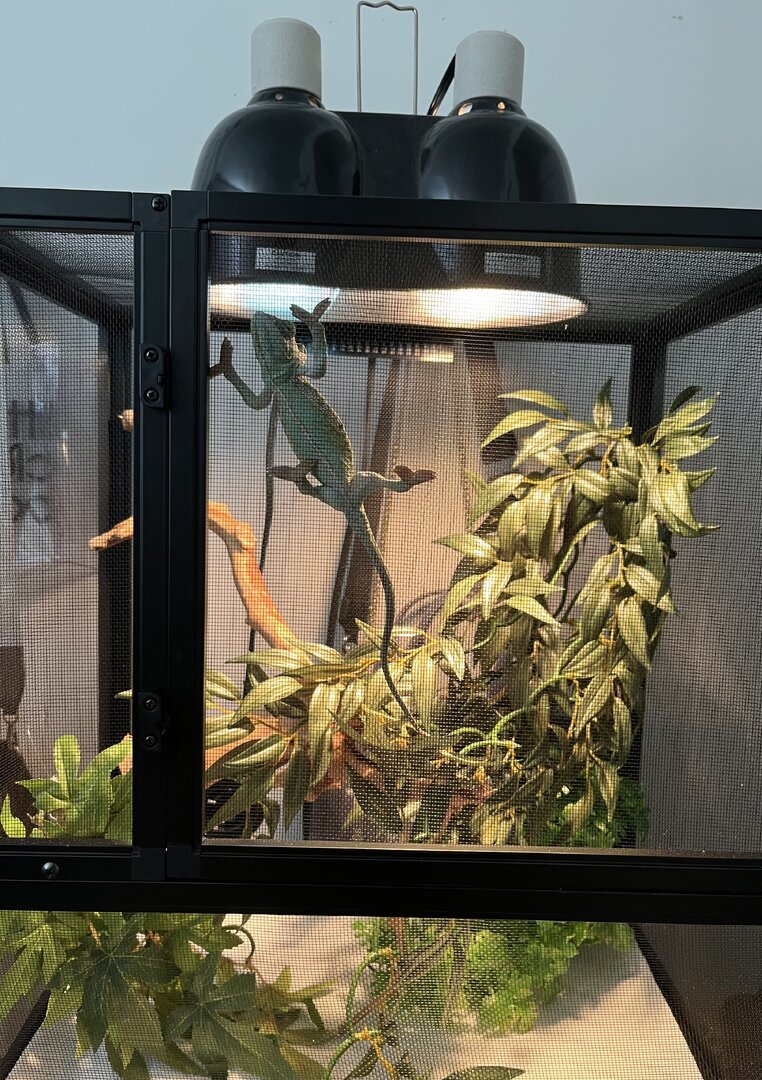 No, he cannot grip branches, he usually just stays on the screen and he has trouble navigating his way.. when he moves, usually his two front hands latch onto his eyes accidentally and I guess he ends up panicking and falling. His enclosure is not the biggest but i’m hesitant on upgrading because I dont want him to fall from a bigger height and injure himself more. Im open to any suggestions.

taquarius said:
View attachment 329865No, he cannot grip branches, he usually just stays on the screen and he has trouble navigating his way.. when he moves, usually his two front hands latch onto his eyes accidentally and I guess he ends up panicking and falling. His enclosure is not the biggest but i’m hesitant on upgrading because I dont want him to fall from a bigger height and injure himself more. Im open to any suggestions.
Click to expand...

So he needs the right UVB lighting... Needs a linear T5HO fxiture with a 5.o or 6% UVB bulb. And that on top of the cage would need a 8-9 inch distance to the branches below.

If he can not grip then you want to get a large plastic tote... This way he can not climb the sides either. Get one that is like 18 inches deep so you can set the UVB fixture on the top. WIth a tote that does not have a screen top like a cage you want to have a 12 inch distance to branches below to put him in the correct UVI level. Screen reduces UVI from our bulbs. This will allow for him to start making D3. This keeps the branches also only about 6 inches off the bottom. You can get creative and drill tiny holes to use zip ties to latch the branches so they do not move.

You want a clamp lamp that you can hook to the side of the tote and angle it. No hotter than 80 where he would sit on the branches. This way you are also not hot boxing the tote. I drilled small holes in the bottom of my tote along the bottom about an inch from the bottom. This made it so air would pull in and up so the tote did not get too hot. And it helped a lot.

Get live pothos plants to put in the tote. Run the vines all over the branches and ground so he can hide in it and drink off the leaves.

You will need a vet to see him. He will need liquid calcium to start strengthening his bones.


This was the tote I used... I could not use real plants because mine was extremely ill with a parasite issue so I had to be able to clean really well constantly. But this helped so much with his falling. You do not need to clip screen to it, I did because I had fake plants hooked in a corner and I was worried he would try to climb out. 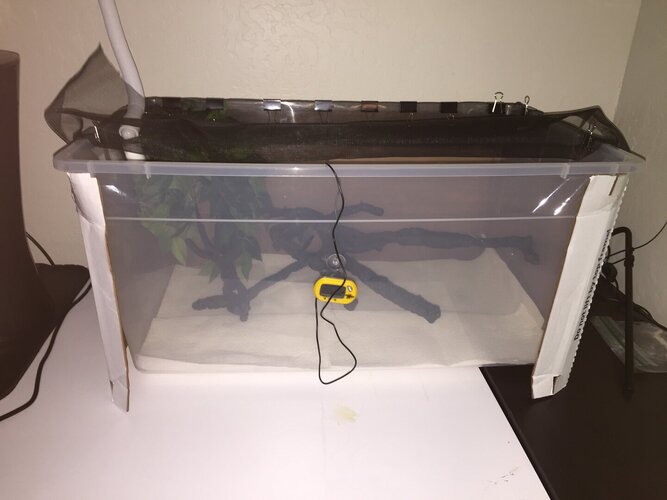