My veiled, Paradox, is dying of cancer and I just wanted to write in to say thanks for all of the help this forum gave me while he's been under my care. He was the classroom pet in my son's elementary school class when we volunteered to take care of him for the summer four years ago. I spent the summer reading this forum and completely revising his care -- took out the substrate, changed the lighting, changed his diet from mealworms to gutloaded crickets and Dubias and a supplement regime, and stopped him from falling off his basking branch by filling his enclosure with climbing branches and live plants. Last summer the school gave him to our family.

We are lucky in Portland to have a good exotic vet, and when two growths appeared over the past few years, she removed them. The first, on his eye, was removed several years ago and was not cancer. The second one was. The growths came back a few months ago. We don't know how old Paradox is, but he's at least seven and probably a lot older, and I just couldn't put him through radiation or another surgery.

Despite the advice on this forum to minimize handling, I would take him out as much as he wanted to. He would come to the cage door when he saw me and press his face against it, and crawl out onto my arm. Even today he hauled himself out so I could take him out into the sunshine. I don't know how much more time we have with him, but this forum has made the time we've had so much richer.

I've posted a few photos. You can see the tumor on his side in the middle photo.

So very sorry to hear this. Clearly you have done the absolute best for this guy and can proud of that, having given him a great and very long life. Cancer is a bitch in all species.

The 3rd pic (close up on his face) is fantastic and oozes character. Well worth a spot on your wall.
view our sponsors

I’m very sorry to hear about your boy. What kind of cancer does he have? I lost one of my boys to melanoma skin cancer.

Ouch...very sad..the downside to having a natural biological body is they are prone to damage

Id say even with the best of care 99% of veiled/panther dont see their 7th birthday. There have been a few "ever living" that made it to a vet documented 9 years. I even had 1 beardy that made it to 13+, but most kicked the bucket at 8-10.

I still think its funny when they start "looking" old. I mean just look at the guy, hes getting grey etc. My 13 beardy had "male pattern baldness" loosing lots of spikes. After he kicked the bucket i adopted a 1 year female, and everyone thought when God was handing out spikes, she went back for seconds.

Thank you for sharing your story. What a wonderful life you gave him. He is one of the lucky ones to have found people that went the extra mile to provide everything he needed and loved him every day. Sending much love to you and your family. <3

I'm not sure what to do. I heard Paradox moving around late last night, and this morning he's down at the bottom of his cage. He must have crawled down last night. His head is up and he's awake, but he's not moving around much. I talked to the vet a few weeks ago about euthanasia, but her office is a stressful half hour drive away. Here he's in his known space, but it will take longer for him to go. Any advice?

@jannb the vet said the lump she removed was a sarcoma, but we didn't have it sent out for testing so I don't have more info. Besides the lump on his side, he has one on his thigh. They've grown really fast. Here are some pics - the first is of the side lump in April when it was smaller, and you can see the thigh lump in the second, taken three days ago. The last is from 2016 when we were chamsitting him over Thanksgiving.

Thanks so much for your supportive notes.

I am unable to give any advice with his passing.. I have no first hand experience with it. When @jannb gets on next she will be able to give you advice. She is extremely experienced.

Beman said:
I am unable to give any advice with his passing.. I have no first hand experience with it. When @jannb gets on next she will be able to give you advice. She is extremely experienced.
Click to expand...

If he’s comfortable home with you, I would allow him to pass there with you, but if it drags out and he’s in allot of pain then you should take him in. Did the vet give you any pain meds?

I’ve had several of my guys pass on my chest.

I'll ask the vet about pain meds. He perked up, so I built him a stick ladder from where he was sitting and he's slowly pulling himself back up towards the top. How can I tell if he's in pain?

That's amazing -- you must have had a great relationship with them.

Paradox died this afternoon. He made it all the way back to the top of the enclosure, and then crawled out onto the ladder leading out of his cage. So out we went into the sun. He died in my lap a few hours later, with the sun on his back. It's been a privilege and an honor to take care of him. Thanks again for helping me and my family to appreciate who he was. 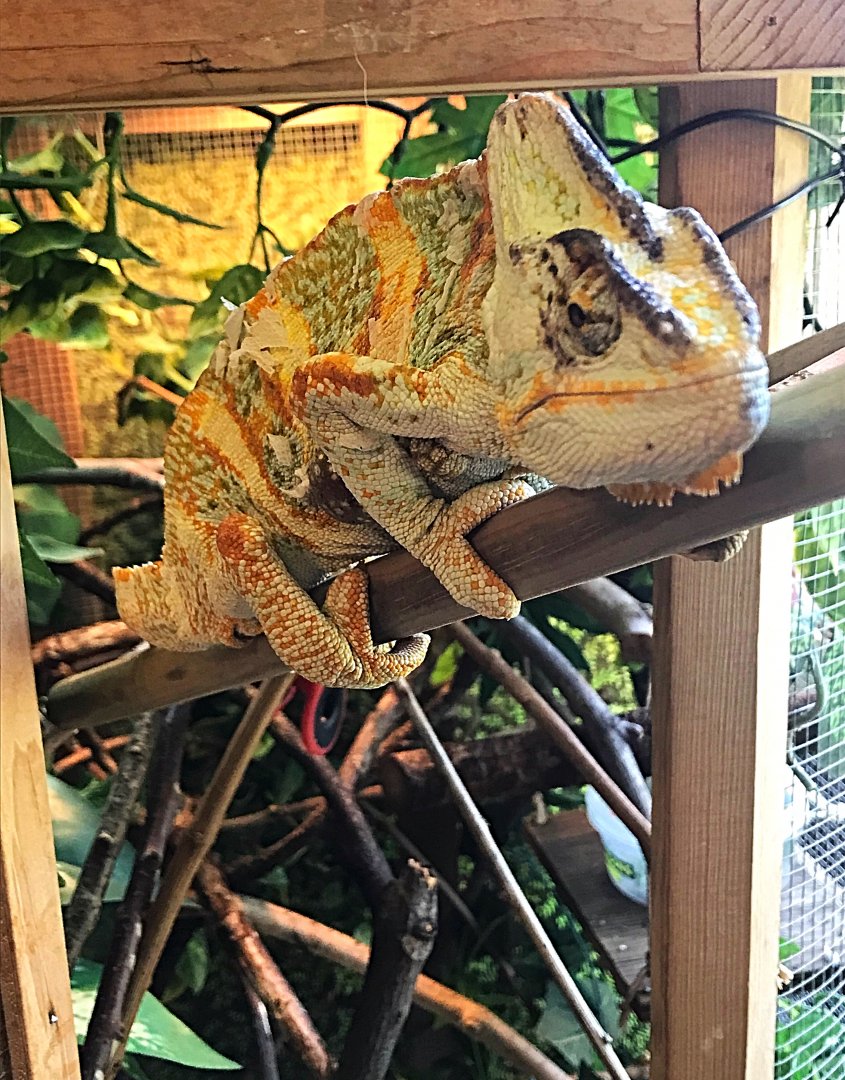 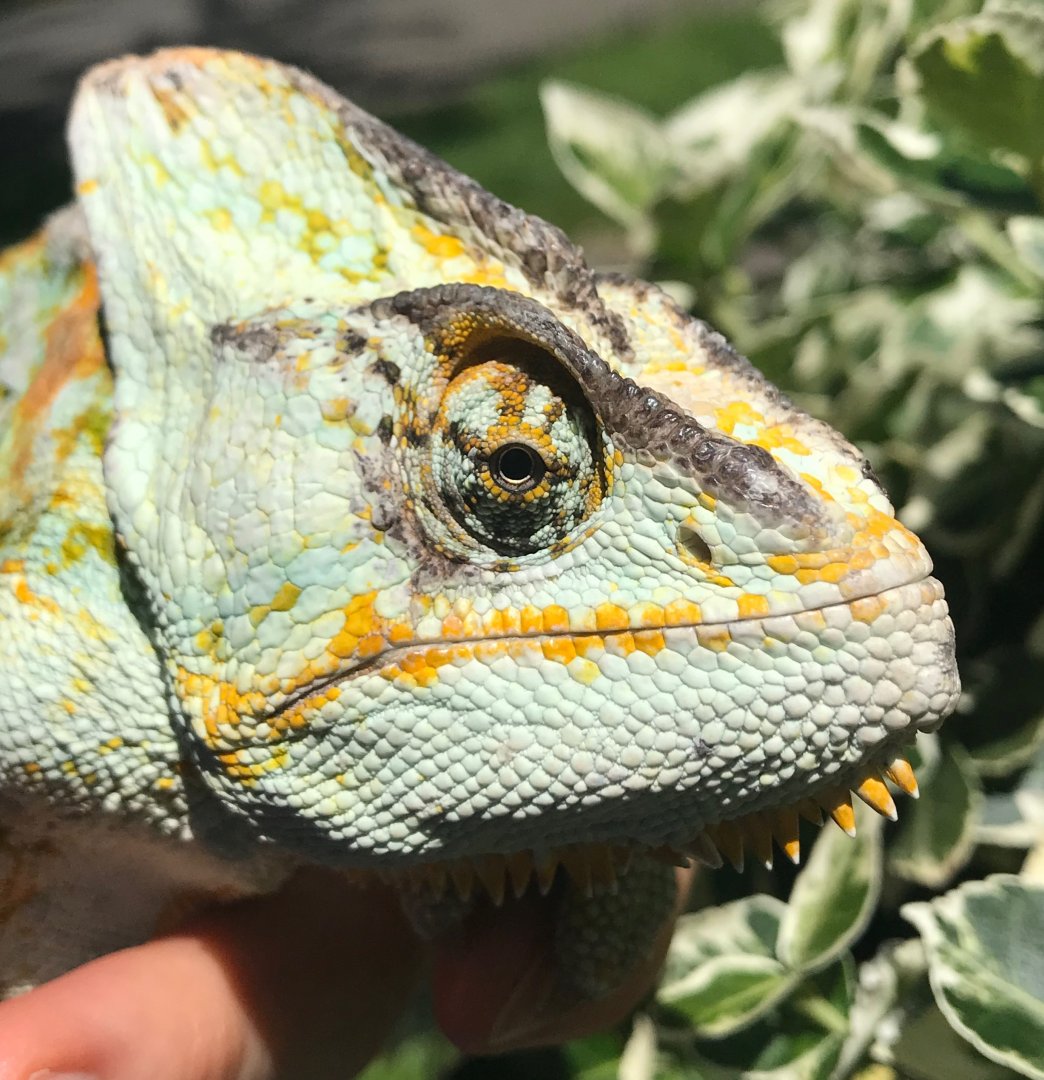 Awww thank you again for sharing his story. It was an honor to read about him and get a glimpse into his wonderful life.

Thank you for sharing, and providing Paradox with such a loving home. Definitely how I want to go, some day- sun on my back, surrounded by loved ones!

Very sorry for your loss. Sounds like you took great care for and loved him dearly. Sarcoma is nasty stuff. He was a handsome fella! We will miss you lil buddy!

ChamSitter said:
Paradox died this afternoon. He made it all the way back to the top of the enclosure, and then crawled out onto the ladder leading out of his cage. So out we went into the sun. He died in my lap a few hours later, with the sun on his back. It's been a privilege and an honor to take care of him. Thanks again for helping me and my family to appreciate who he was.
View attachment 231656View attachment 231657who he was.
Click to expand...

This is so beautiful, thank you for sharing and giving him such a great life.

Rip little dude may chameleon heaven have all the insects you can eat. I’m sure he’s grateful for the time and care you put into caring for him. I hope you and your family find peace in his passing.

I’m so sorry that you had to lose him but I’m glad he got to spent his last bit of time with you.
Sleep tight little man.

What a great story. Thank you for giving him a great life, and a peaceful end. You took wonderful care of him. He was beautiful, so much character.