Canis Majoris aka Oscar, is a wild caught sambava that myself and my partner in crime nursed backed to health after being purchased from a shop that was keeping him in exceptionally sub-optimal conditions. Upon acquiring Oscar, it was understood that we would be inheriting everything else that came with him, i.e. extensive health complications, several visits to the vet, and in all probability his eminent demise. Upon taking him to the vet for an evaluation Oscar was diagnosed with a severe bacterial infection in his intestinal tract and an even more severe infection in both his upper and lower jaw that had spread to the bone tissue and was festering. We were told that his chances were slim and that if he never fully recovered it would not be a surprise; euthanasia was a possibility. After consideration we opted too take the infinitely more challenging path: life. Oscar was put on a strict regiment of antibiotics as well as a specialized diet supplemented with high amounts of calcium and vitamins on the days following his ingestion of the antibiotic. Since he was unable to feed or drink on his own everything was done by hand, his medicine made him exceptionally thirsty, going through 40-50ml of fluid daily was not irregular for him.

This process went on for days, then weeks, and eventually months. Four months later he is still with us, although he will most likely have permanent scarring on his bottom lip. From a dying star at 210g, to a hypergiant, Canis Majoris aka Oscar, our 260g-280g titan has been reborn.

Photos:
1. The first photo shows Oscar while he was very ill, he would always hide his infected tissue from sight and would not let anyone near his mouth. His grip was weak and his appetite even weaker.
2. After a couple weeks Oscar began to move around on his own and even allowed us to take him out of his enclosure to enjoy some natural sunlight.
3. A few weeks after his adventure outside we decided to see if he would fire-up when presented with his own reflection; he graced us with a display to the best of his ability.
4. (2 photos)Two months later not only has he improved dramatically in mobility, but he fires-up with full fury at the sight of any potential mate or competition. 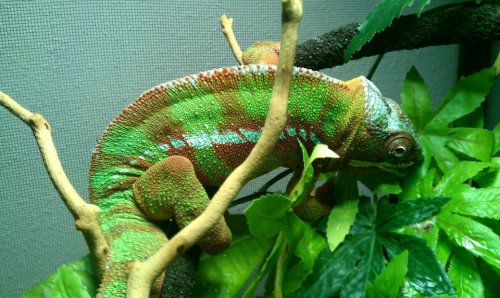 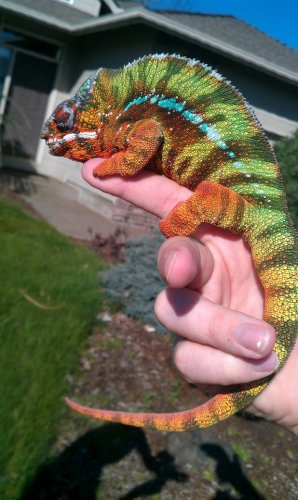 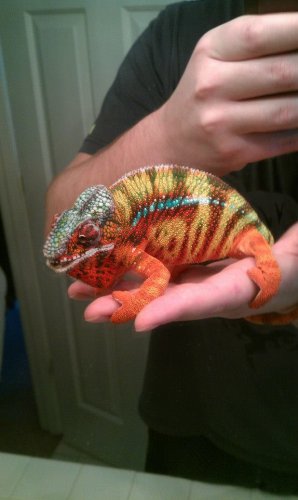 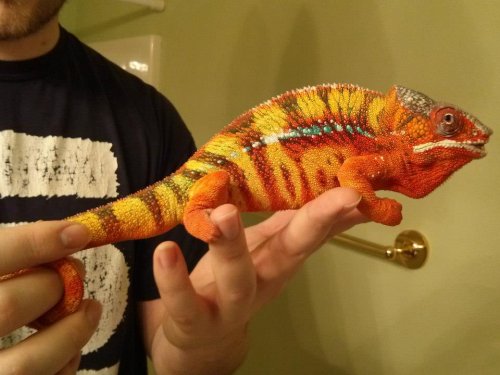 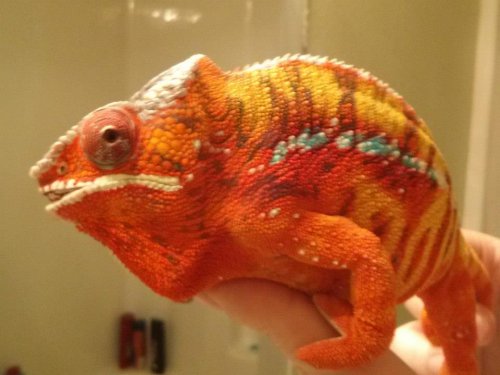 I apologize in advanced for any mis-spelling or grammatical imperfections, someone PMed me about Oscar so I decided to do this last night post. I'll edit and update everything tomorrow after work. Also keep in mind that I am 6'5" and wear size 3xl gloves(8 inches from base of palm to tip of middle finger, a little over 4 inches from pinky knuckle to index knuckle), so having him in my hands doesn't help emphasize his enormity.
J

Beautiful wild caught chameleon & good on ya for adopting and getting him back to healthy again, that guy will make some killer babies one day

Wow! Great work with this beautiful guy... You must be so proud seeing his beautiful fired up colors after all the hard work you put in to save this special guy.

Thank you so much for what you did for Oscar, and for sharing the heartwarming story The large majority of chameleons that fall into such a bad state of health never recover... You have worked a minor miracle
I

Great job... My hat is off to you. Dez from chamalot chameleons has some little girls that would be a perfect match for this guy.. It would be awesome to see him pass those genes along. His colors are amazing!!!

What a change! He is a stud

Out for a little stroll on a exceptionally nice day, his healing progressing nicely. 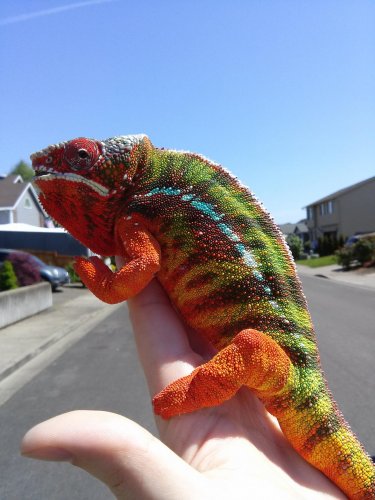 Great job with him! HEs a stud

I love this post! It has brought tears to my eyes! Thank you for what you've done for this beautiful creature, you have a very special heart.

He looks gorgeous now. Thank you for caring and taking in this beautiful creature and bringing him back to the beautiful condition that's he's now in. You did a fantastic job with him.

Let me echo all of the praise that others have bestowed on you for "choosing life" for Oscar. This is the kind of spirit that exemplifies a love for the creatures you are working with. Many of us understand the dedication required to choose this path but the rewards are so undeniable and I am not simply referring to potential offspring...It is a reflection of great character and I celebrate you here and now! Have you shown him to any females and has he responded to them with any head bobbing? He is gorgeous and if he is strong enough to court a female, perhaps I can be of help with a mature female. It would be a shame for him to not leave a legacy behind. E-mail me and we can discuss further. In the mean time, again, well done! Ed Kammer Kammerflage Kreations

What a beautiful Sambava he is!!! Hats off to you for bringing him back to life - that shows true dedication to a cham and the results are absolutely stunning! Hopefully he continues in the right direction and I think his lip makes him look distinctive

Kudos to you and your partner! He looks great!!

We do not see enough keepers willing to invest the money and the time to care for a cham the way you have. Thanks form your cham and from me for choosing life for him.

E
How old is my cham?