Hello
I have a female veiled chameleon named Roxy I am very concerned about. Six days ago I noticed strange black markings on her back leg, hips, and front leg. It was only on the right side of her body. The black markings continued to spread so I took her to our emergency exotic vet. We were told the vet was experienced in exotics but she didn’t seem well versed in chameleon care (the care sheet she printed out for me said to gut load my bugs with dog food or fish pellets). She told me the markings were probably from stress and to up her temperatures to 94-100 degrees, feed her every day, and keep the humidity in the high 70s all day. The vet said she looked dehydrated and gave her some fluids but she has been passing urates frequently and lately they’ve all been white (before there might’ve been a little yellow at the end). They took x-rays that confirmed she has a clutch of eggs, but the vet said they didn't look fully developed. They also took some blood to see if her calcium levels were normal and they claim they are normal. I was also given some calcium glubionate to give her once a day because the vet felt that and extra hydration might help her lay eggs. The vet didn't suspect a fungal infection or bruising but since Roxy has been so clumsy I won’t rule out bruising. I had some crickets escape before so it’s possible they might’ve gotten into her enclosure and bit her but I’m not sure why the markings haven’t been getting better.

I cannot see the black markings during the day because she has been showing her gravid colors all day for about a month. I can only see them at night so the pictures with the markings were taken while she was asleep (she does not sleep during the day). However, I noticed her tail and legs look a little dull, along with the upper part of her back. She is due for a shed so I suspect the dull colors might be from that.

I am aware of the egg laying process; she has laid eggs twice before with no problems. I have a laying bin set up in her enclosure that is 12 inches in diameter and 15 inches tall. It is filled with 12 inches of washed play sand mixed with eco earth and Reptisoil. She has used this bin before the last time she laid eggs. I’ve lately been keeping her cage covered with a black sheet but have a gap at the top to allow airflow. I like the gap so most of the time I can peek through the windows of our garden house (where she is kept) and make sure she is still moving and not lethargic. However, today I changed it so the whole upper part of her cage is covered and there is a gap at the bottom. I cut a peep hole in the corner. Roxy used to climb all over her cage, top to bottom, side to side, but for the last month she’s spent a lot of her time basking and less time traveling. She is still moving around but not as much as before. She mostly climbs along the top branches, I have not seen her on the bottom branches unless there is a cricket down there to eat. Her eating has been fine and I made sure to squirt water in her mouth when I misted her in case she is a little dehydrated, like the vet claimed.

I will fill out the “ask for help form” and include pictures of her black markings and how they are spreading, her enclosure, bloodwork, x-rays, urates from this morning, and a picture of her this morning with the green mark on her tail.

Current Problem - Black marks on right side of body that seem to be spreading. I saw some on the left side of her tail last night. She has also been a little clumsy when she climbs. I attributed this to her being so large because of the eggs she’s carrying. However, I won’t rule out bone weakness especially because of the horrible compact UVB I was using.
This morning I noticed strange coloration; she was displaying her gravid colors but one patch on her tail was bright green (picture included). I have never seen markings like this, the black patches OR being entirely black with one bright green part. The green patch is still there. I apologize for the long post but I wanted to include as much information as possible. I greatly appreciate any advice or input anyone has. 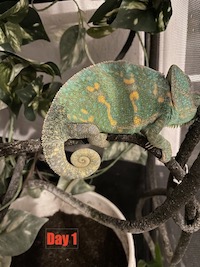 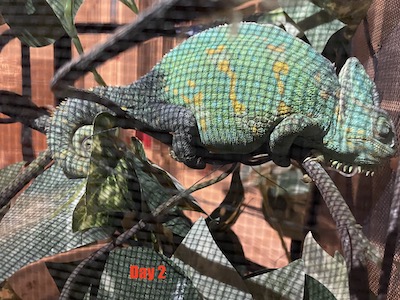 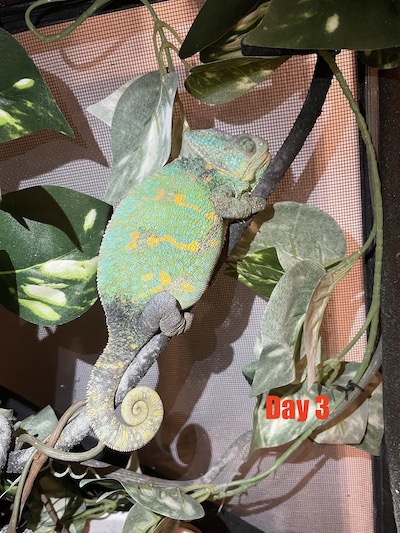 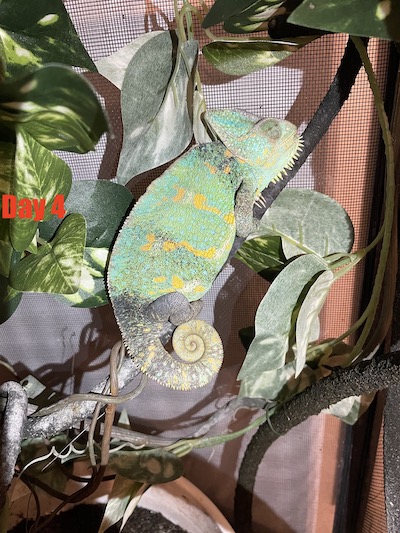 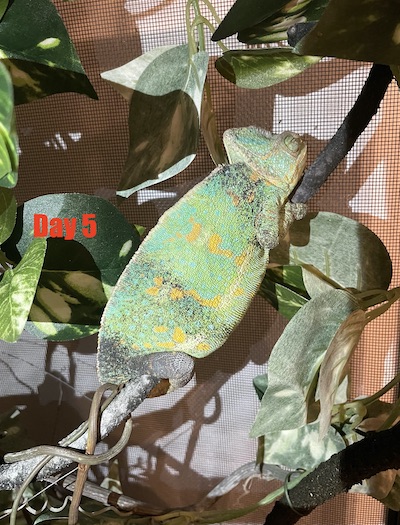 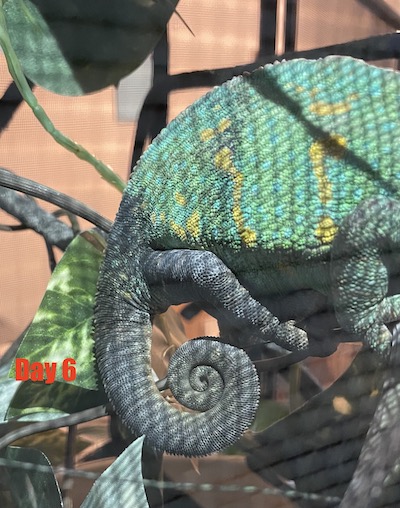 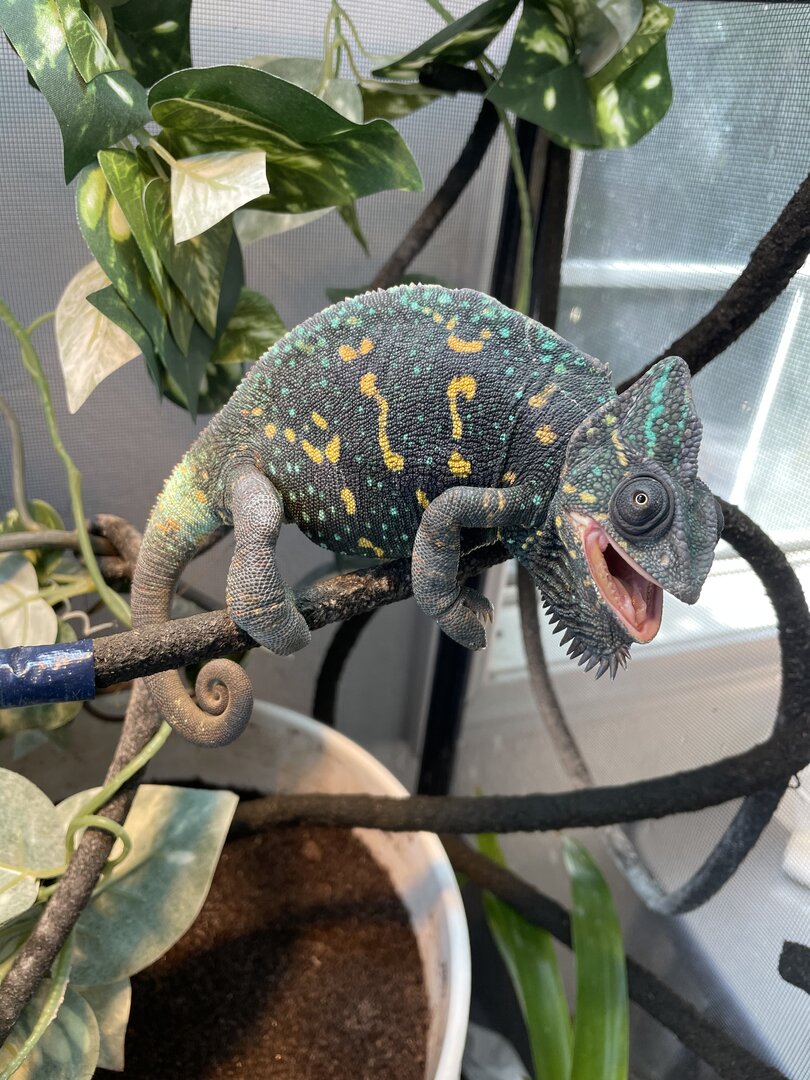 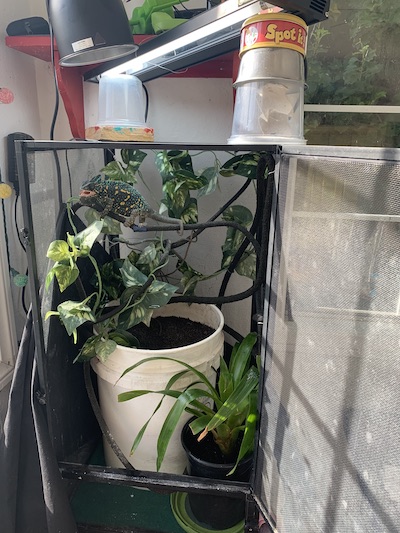 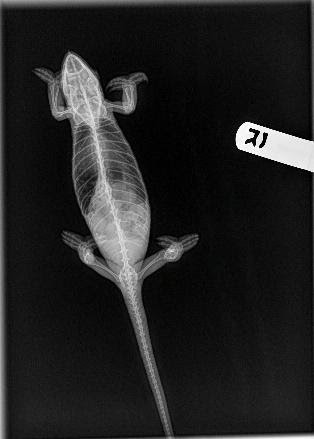 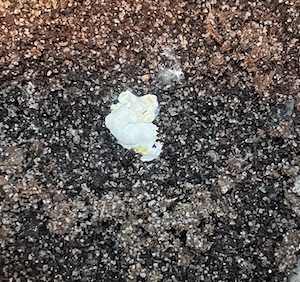 I don't know if I mentioned that she never used to hiss at me unless my hand got too close to her. Now, for the past mont (when her gravid colors showed up) she hisses at me any time I come close to the cage. In the above photo she is especially mad because she hates my camera.

I’m afraid this one is beyond my skill and knowledge.

I am also not sure what is going on here.
But, her front arms look a little swollen...do you have more photos of the front arms? 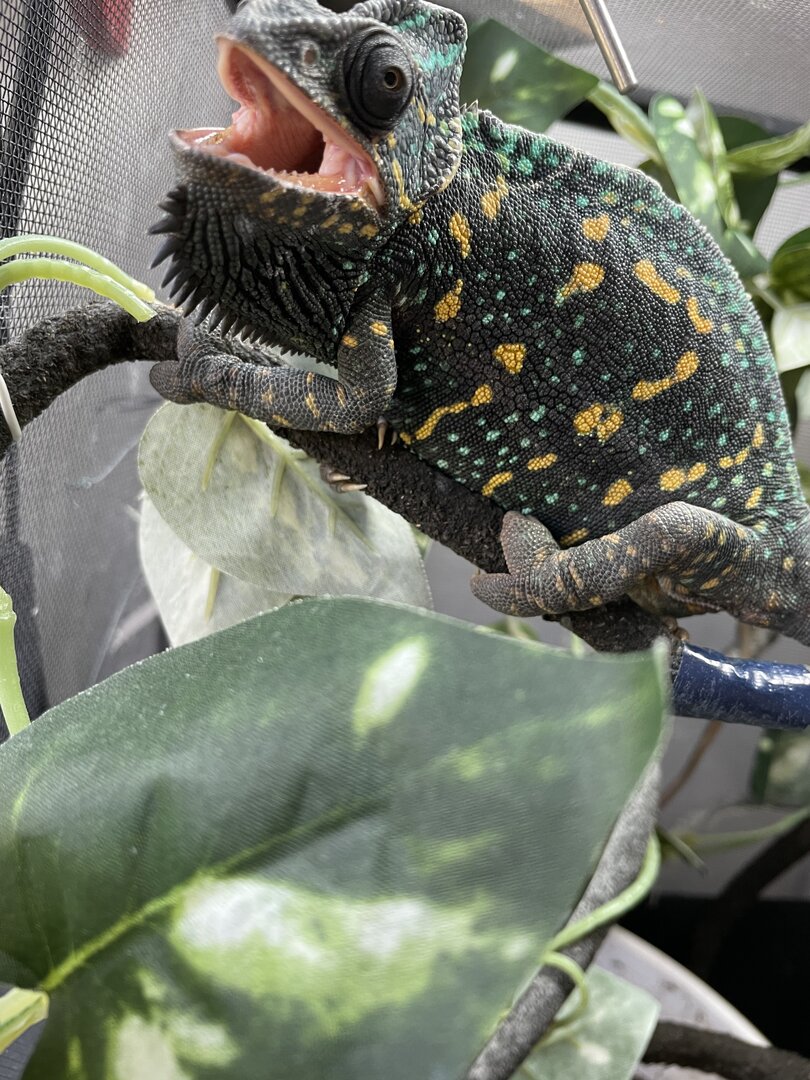 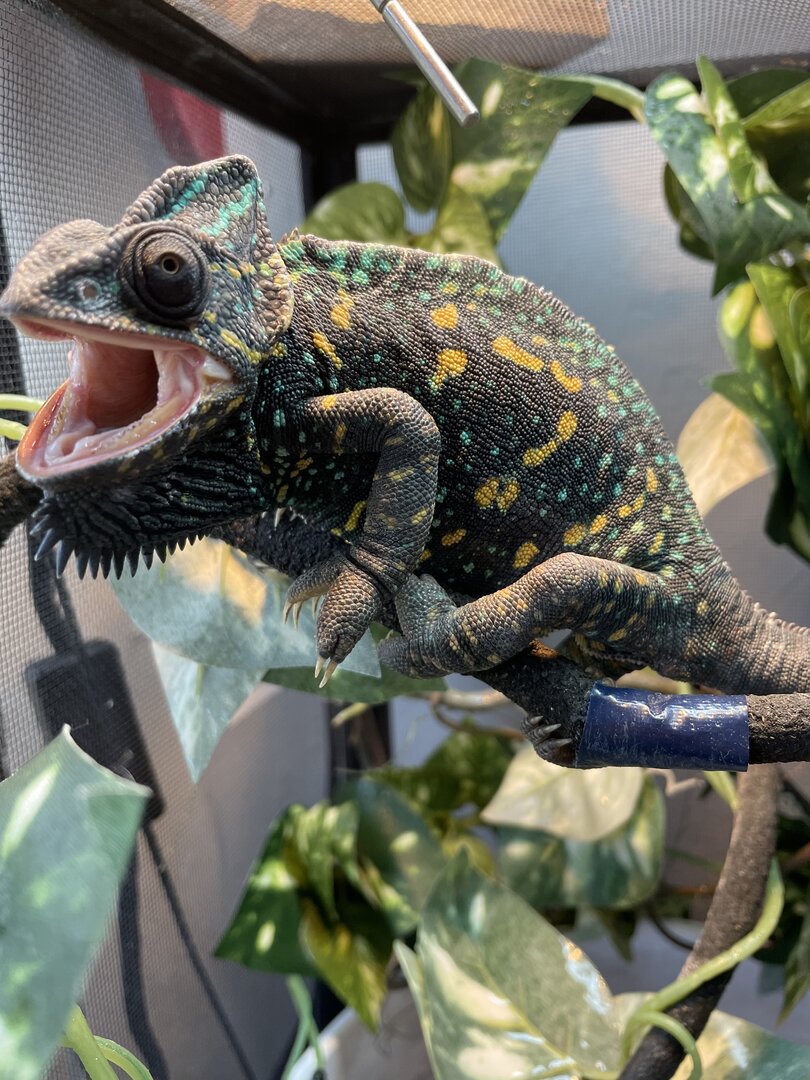 Here’s the other arm 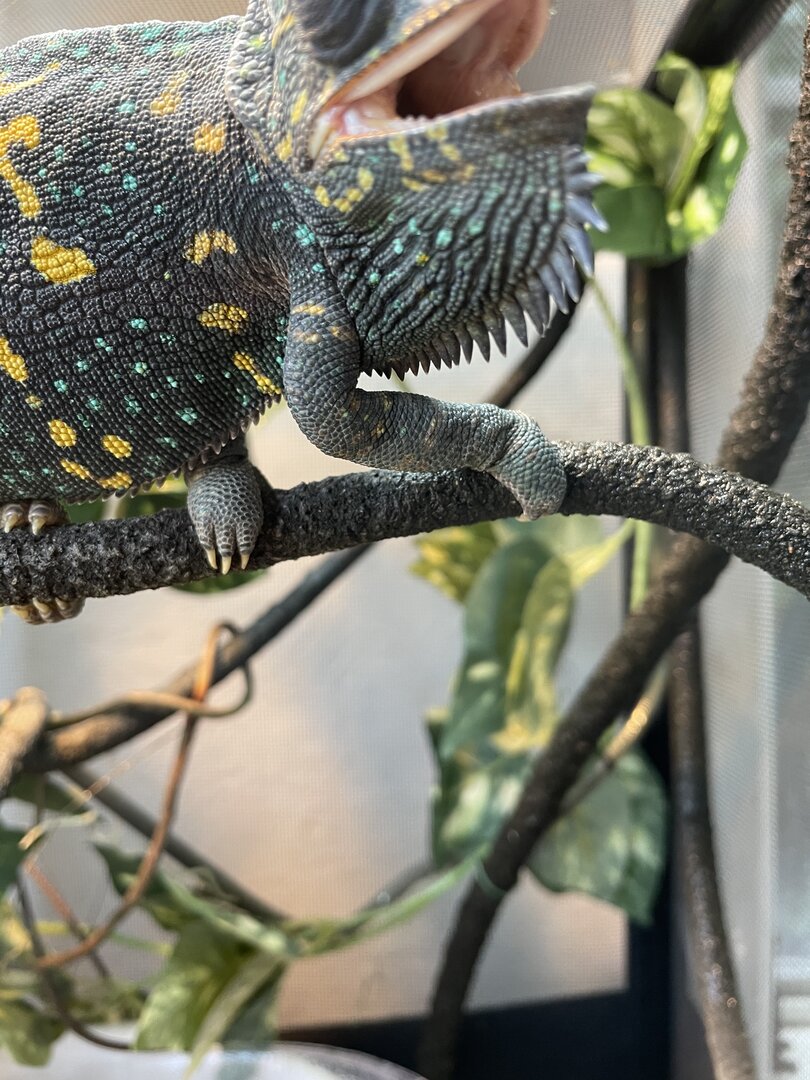 Ok so there is a lot going on here... Right arm is swollen and looks like it could be Gout. Left arm is swollen as well. She also looks overweight. And then of course there is the fact she is gravid. The swelling is a big deal... Gout is not a good thing and with the improper supplementation and husbandry this is one thing that can develop from that. Here is an article on it. https://veterinarypartner.vin.com/default.aspx?pid=19239&id=8049747

Just having changed multiple aspects UVB, Supplements, and cutting back feeding is great. But this will take time to see results... With the fact that these key elements were incorrect for quite a while there very well could be long term damage.

I am wondering if the color change has to do with the fact that she is holding a larger clutch... My line of thinking here... If she has that much additional pressure on her back end spine. Granted this is me just thinking outside the box lol.

Typically we see this color change of the tail when a vet draws blood. I would have to defer to my other keepers of females though on the color change when she is in pj's having the black tail moving up to her back legs.

I actually was considering she might have gout a couple weeks ago because of that sort of lump on her wrist. However, I brushed it aside when I looked at old photos of her with that same thing. Here is a photo from last September of her with the "bump" I am talking about. 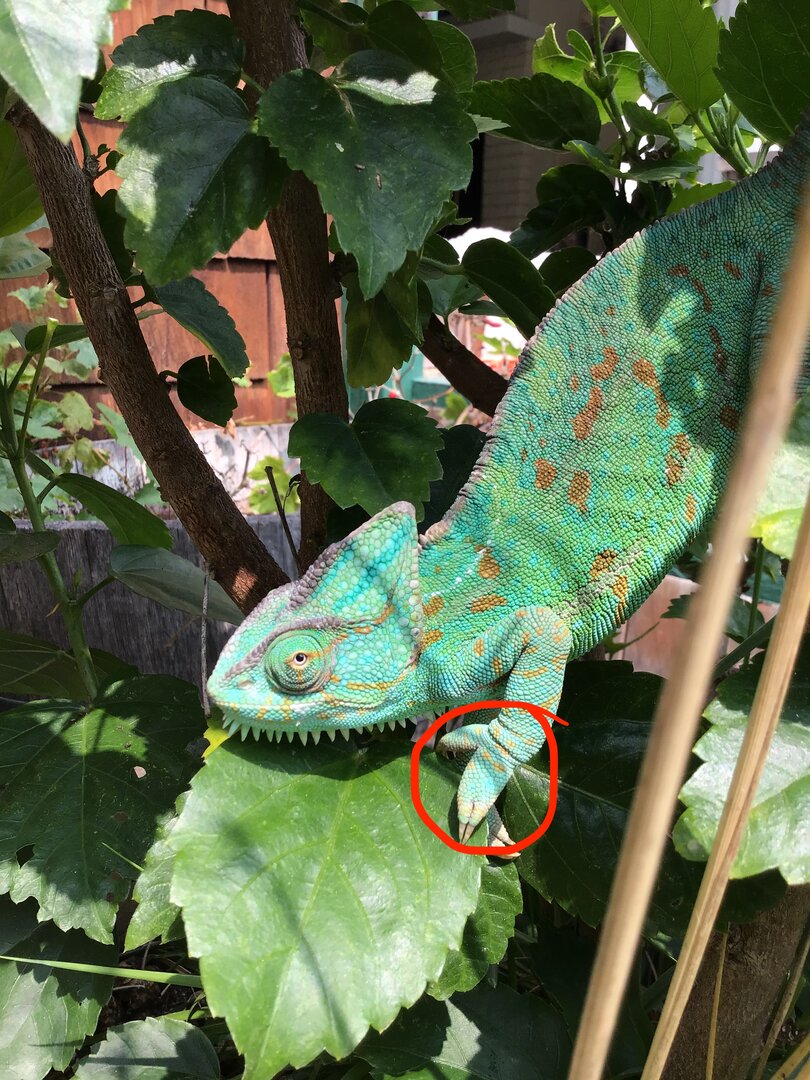 Yes, her entire right arm is swollen from the elbow up to the foot. It is worse then the other one. When they are fat they can get little rolls there on the wrists... But it looks different then her arms do. The only way to confirm gout is a full blood panel at the vet. They will be able to see what her uric acid levels are. But with her being so gravid I would worry about the stress.

Yes, I'm concerned about stress too. Unfortunately I had to bring her to the vet yesterday because of the black marks spreading. They never said anything about gout or swollen arms.

Roxy3000 said:
Yes, I'm concerned about stress too. Unfortunately I had to bring her to the vet yesterday because of the black marks spreading. They never said anything about gout or swollen arms.
Click to expand...

Then you need to find a new vet.

Roxy3000 said:
She told me the markings were probably from stress and to up her temperatures to 94-100 degrees, feed her every day, and keep the humidity in the high 70s all day. The vet said she looked dehydrated and gave her some fluids but she has been passing urates frequently and lately they’ve all been white (before there might’ve been a little yellow at the end). They took x-rays that confirmed she has a clutch of eggs, but the vet said they didn't look fully developed. They also took some blood to see if her calcium levels were normal and they claim they are normal.
Click to expand...

ALL of this is extremely concerning....
Female veileds should never be kept hotter then 78-80max at basking. Even a male would die under 94-100 degrees. 70% all day is way too high for a daytime level 25-40%max. She in no way looks dehydrated and if urates are white then she is not.

I am not sure of how they know the calcium levels are normal. Every vet I have gone to has to send the blood work out to a lab to get full results. Have them email you the lab results.

Yes. But they only tested the calcium levels

Advice for an egg bound chameleon

How often should a veiled lay eggs?

A
Female chameleon weigh eggs and a broken arm

how do I know when she’s receptive again?