Hello! Just FYI this is going to be a long post.
My name is Kaytlin and I am very new to chameleons. I'm relatively new to the reptile world as well, I've only just started keeping them about a year ago (started with one crested gecko and when I realized he wasn't too hard I started collecting more lol). I'm now pretty obsessed with reptiles. I've always been animal obsessed, I'm actually applying to a zoo keeper program, but now that ive started with the reptiles and amphibians I think I've found my calling. Anyways, I wanted to voyage into the world of chameleon keeping. I had originally stayed away after being told by a few people that they are NOT beginner reptiles, and are very very fragile. I thought they were so cool and fascinating but I never thought they were in the cards for me, until I started to keep herps and I realized that they aren't as difficult as everyone says.

I have decided on getting a veiled chameleon, definitely a male. As much as I love the flashy colors of the panthers, I just think theres something so captivating about the veileds. I havnt started to buy the setup yet, waiting on pay day, but it will be soon. My local reptile shop doesn't have any baby veileds for sale anyways, just a breeding pair and I'm not interested in that. Last time I spoke to them they said they will have them in a bit, as they have eggs in the incubator currently (I dont really know how long it takes chameleon eggs to hatch honestly). Either way its perfect because it gives me time to get my stuff together for him. This is where I would like some guidance.

I buy a lot of my reptile supplies from Josh's frogs, I am very into the idea of naturalistic or bioactive setups. I am going to try to use as many real plants as I can, not only because I like the look but also because of how well they bump humidity. Not to mention, I've noticed a lot that fake plants tend to be more expensive than the real things. So on his website, he has a veiled chameleon kit. https://www.joshsfrogs.com/vieled-chameleon-complete-kit.html

I was thinking of substituting the exo terra for the reptibreeze xl, as its only ten dollars more and the perfect size for an adult male. Would it really be an issue to put a baby into the adult size? I want to cup feed no matter what, I breed discoid roaches and do NOT want to deal with crickets, so either way I would be cup feeding.

As far as the rest of the kit goes, how does it look? I would also be ordering a ficus from him, and maybe a pothos. Are the lights he includes good for the plants? While I'm great at animal husbandry, I have a bit of a black thumb. The only reason my bioactive terrariums look nice is because I'm forced to "water" them every day while I mist my crestie's tank. I am also concerned about drainage but I have looked through the drainage thread and found some interesting ideas that I might use. I use those garage wire shelving as reptile racks and so putting a bucket on the shelf below to catch water from the drainage holes will probably be the way to go. I also probably won the buying the thermometer he includes just because I can get a similar one for less money on amazon.

Welcome to the forums. This is a great place to,learn about chameleons. Our resources link has tons of info that you should find helpful.
https://www.chameleonforums.com/care/

Also my blog for new keepers linked below. I’m not fond of pet stores for a chameleon purchase nor kits. A small time personal breeder is so much better. When you are set up and ready I can help you find a good breeder.
https://www.chameleonforums.com/blo...-with-young-veiled-or-panther-chameleons.325/
K

The reptile shop that I’ll be getting my chameleon from is actually awesome. They aren’t any sort of chain, they are independent and I have a good relationship with them (their owner actually breeds veiled chameleons as well). They are the place I get all my feeders and my pac man frog from. Their care for their animals is amazing and I trust them a lot.

As far as the kit goes, joshs frogs I also very much trust, I’ve purchased from them before and have always been thoroughly impressed with the quality that I’ve received. I do understand though that they specialize in poison dart frogs and so therefore maybe he doesn’t know what’s best for a veiled chameleon, which is why I was asking in here. Obviously all of y’all know much more and have much more experience. My main concern at the moment is lighting and drainage and whether getting the 4x2x2 for a baby is ok.

Just so it’s easier for everyone to see what is in the kit she’s talking about... 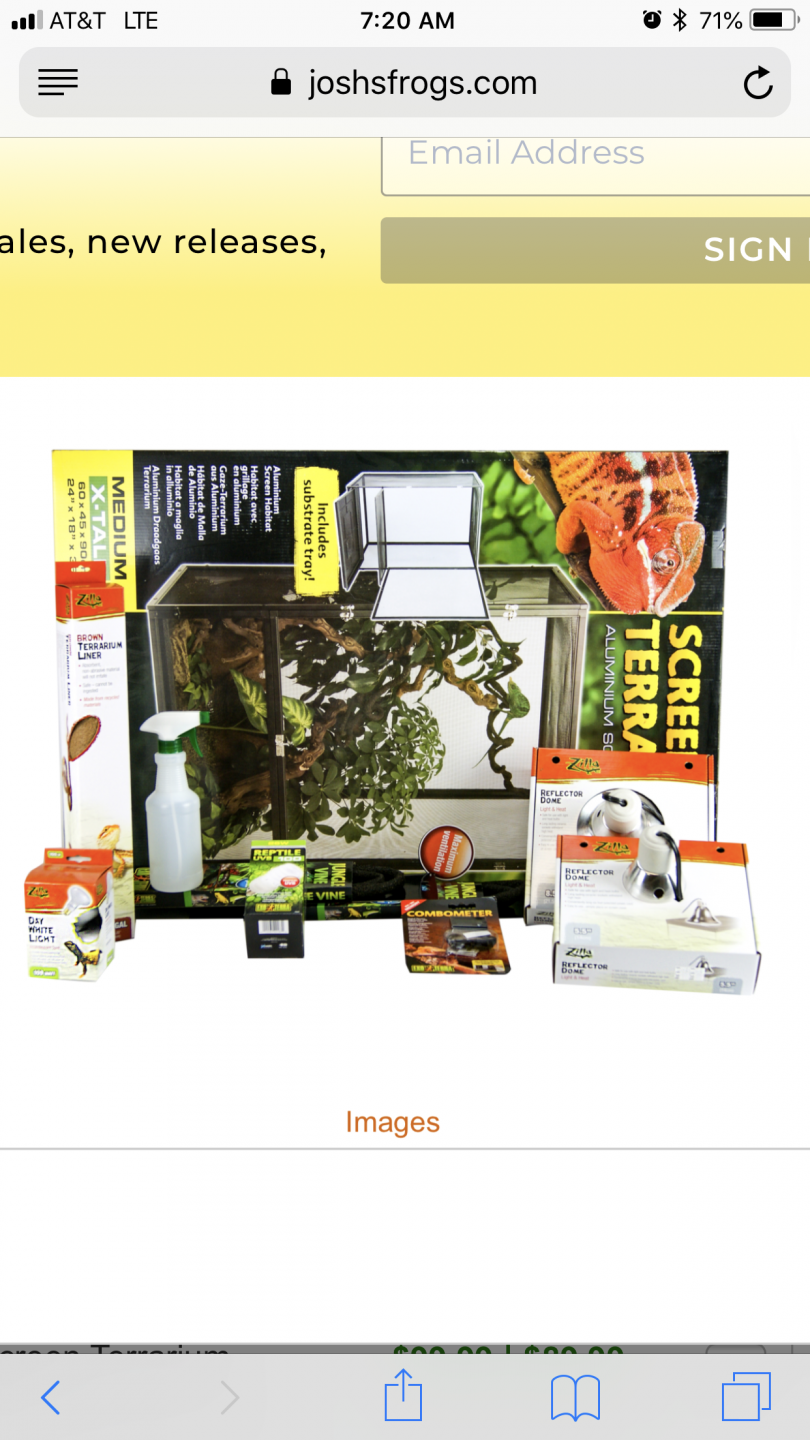 A baby will be fine in a 2x2x4 that’s the exact cage I use to raise my veiled hatchlings. Just make sure to keep an eye on her to make sure he knows where the food, water, and basking spots are. Most will find them all no problems.

The kit is the absolute minimum you can purchase and expect the Cham to survive. However he will never thrive in that set up, same for the plants. All that equipment is entry level at best, I recommend you buy the different components individually to get the results your looking for. The best type of uvb fixtures are the linear ones as they spread the uvb across a wider area than the CFLs. Checkout lightyourreptiles.com. If you want a bioactive set up I recommend you buy a fixture that takes T5HO bulbs. The temperature and hydrometer are garbage, not accurate.
K

Thank you! I did think the lighting seemed a bit basic, I do prefer the linear UVB anyways, mostly because they look nicer in the first place. What kind of wattage for a basking light would be good? As far as the themometer/hydrometer goes, I was never going to buy that one. Basically the only things from the "kit" I was really going to get was the lighting and the vines. I want to add more real plants and climbing items as well, since the two vines it comes with is obviously not enough. The plan was to get a ficus and maybe a pothos. I think at this point just buying things separately would be easier, though I will probably still get a good amount from Josh's Frogs just because the prices are good and I can get free shipping lol.

Basking - start with a standard 60w incandescent house bulb and measure the temp where your Cham will be basking. Increase or decrease the wattage from there.
You must log in or register to reply here.

Should my cham be eating her plants?

B
Suggestions on vine plants for veiled chameleon enclosure?